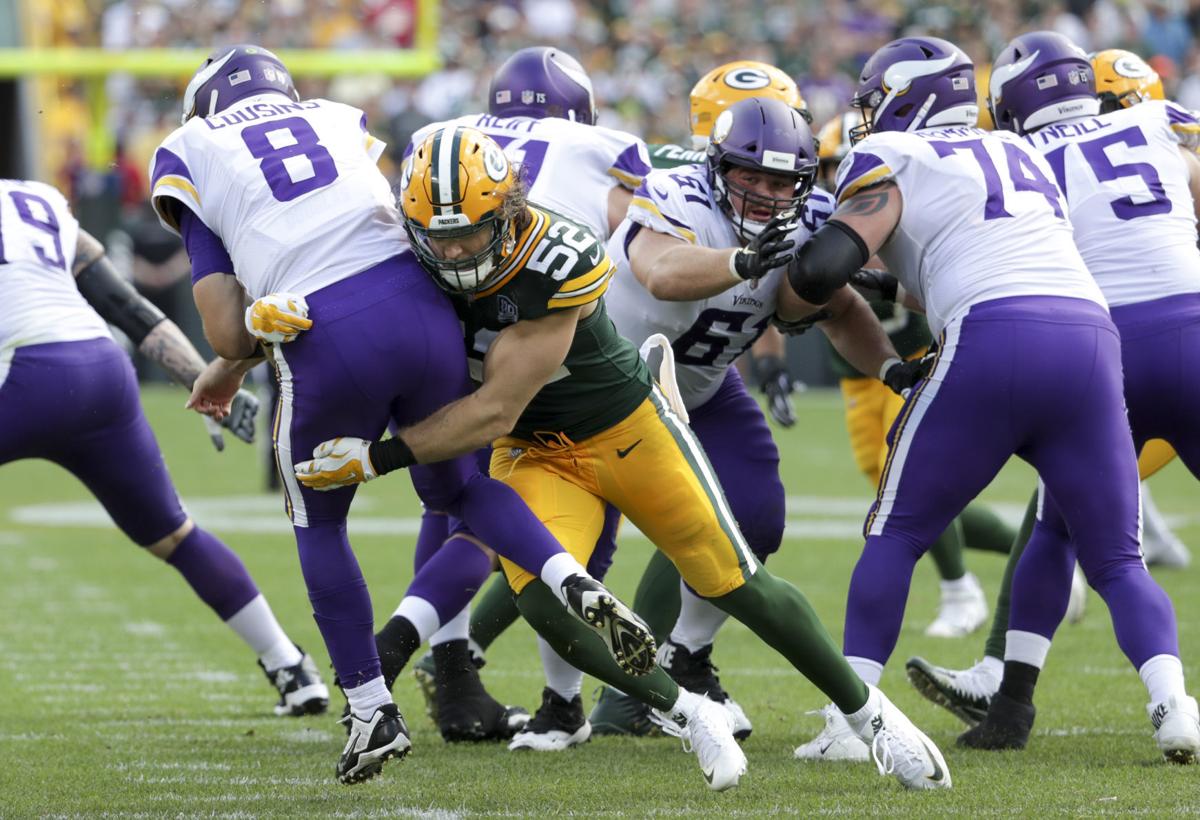 Linebacker Clay Matthews was called for a roughing-the-passer on this play late in the fourth quarter of Green Bay's 29-29 tie with Minnesota on Sunday at Lambeau Field. 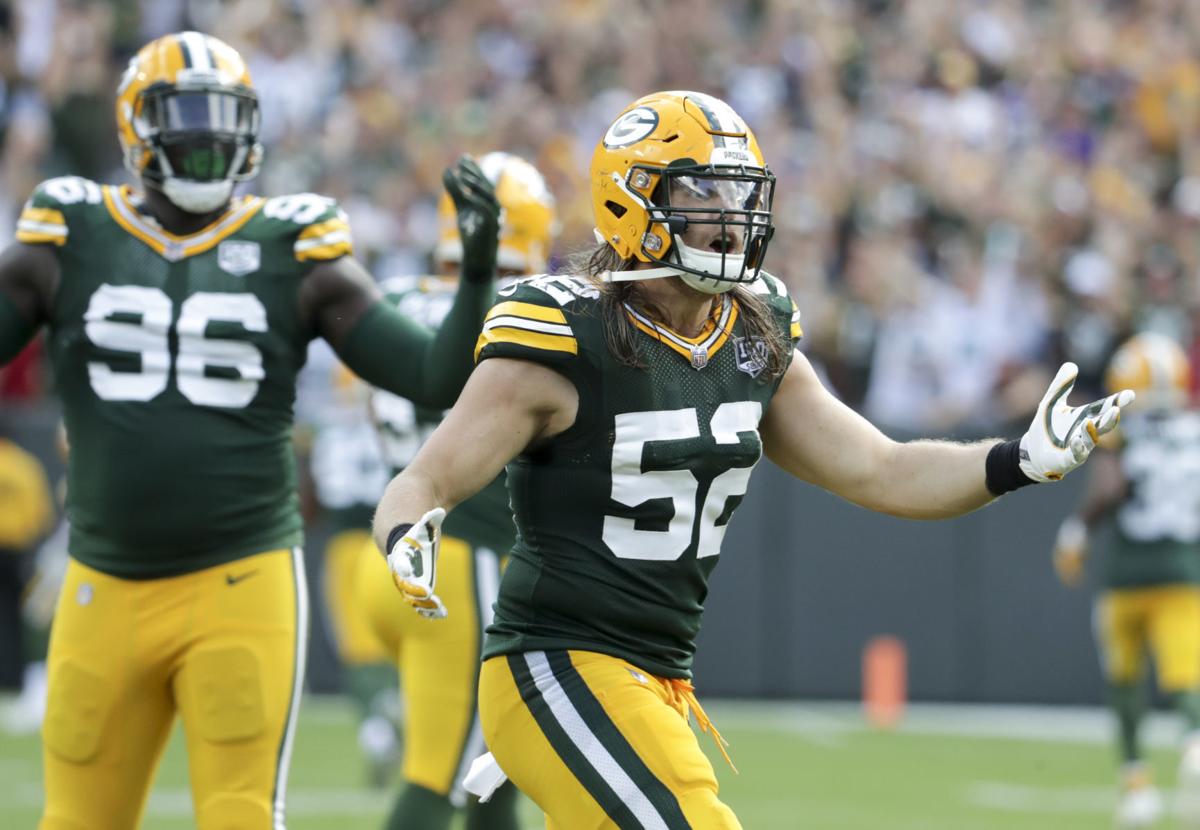 Clay Matthews protests after being whistled for a roughing-the-passer penalty on Vikings quarterback Kirk Cousins. “I thought I hit him within his waist to chest, I got my head across, put my hands down," Matthews said Sunday.

GREEN BAY — Coach Mike McCarthy and his Green Bay Packers staff spent part of Monday putting together a compilation of plays they disagreed with from Sunday’s 29-29 tie with the Minnesota Vikings to send into the NFL’s officiating department.

Apparently, they won’t need to include Clay Matthews’ controversial roughing-the-passer penalty late in the fourth quarter. Because as far as the NFL is concerned, there is no controversy.

A league source said Monday afternoon that not only does the NFL officiating department believe referee Tony Corrente was right when he flagged Matthews for his hit on Vikings quarterback Kirk Cousins, but that the play will be used as a teaching tool in the weekly video the league office sends to its 32 teams to emphasize various rules and how they are enforced.

The call against Matthews was critical because it came with 1 minute, 37 seconds left in regulation and wiped out a Jaire Alexander interception that essentially would have sealed a 29-21 victory for the Packers. Instead, Cousins threw a 22-yard touchdown to Adam Thielen and completed a 2-point conversion to Stefon Diggs to force overtime.

Neither team scored in OT, with Vikings kicker Daniel Carlson missing a pair of field-goal attempts, including one as overtime expired. The Vikings cut Carlson on Monday.

Speaking before news broke that the league was standing by Corrente’s call, McCarthy said he spoke with players about the play and the impact it had on the outcome.

“I addressed it with the team. We don’t focus on the uncontrollables. I don’t focus on officiating,” McCarthy said. “We focus on the fundamentals (of tackling), doing things right — footwork, approach, strike and finish of any tackle. And I felt Clay did what he was asked to do. Obviously, they saw it differently. For me to sit here and dispute it is really a waste of everybody’s time.”

Asked if he felt calls like the Matthews penalty should be subject to instant replay review, McCarthy replied, “Well, I think anytime a play can change the game … We’re not going to sit there and gripe and moan and count on them to get a call to win the game. But also, when you have a chance to reflect and evaluate, everybody’s about trying to improve. We’re no different. We give the feedback that’s part of the process for the officiating department.”

The source said the personal foul called on Vikings linebacker Eric Kendricks earlier in the game for a hit on Aaron Rodgers — one McCarthy himself acknowledged also shouldn’t have been a penalty in his mind — will be included in the teaching video as well.

“The technique of grabbing the passer from behind the leg or legs, scooping and pulling in an upward motion, is a foul,” the NFL source said. “Examples of this technique, including the two roughing the passer fouls from the Minnesota-Green Bay game, will be shared by NFL senior vice president of officiating Al Riveron with clubs this week to reiterate that this tactic is a foul.”

Matthews, who politely declined to speak with reporters gathered around his locker Monday, had predicted after the game the league would stand by the call.

“I thought I hit him within his waist to chest, I got my head across, put my hands down. To call it at that point in the game is unbelievable,” Matthews said after the game. “Last week, OK, shame on me. This week, that’s unbelievable.

“The worst part is, we’ll probably send it in and you know what they’re going to say? They’ll find fault on me because they’re going to agree with the refs. I don’t know. It’s a difficult call to call. You see how it changed the game. I know there’s an emphasis on protecting quarterbacks but it’s gotten out of control. I don’t know what else to do.”

For years, NFL teams have collected the plays each week that they felt were incorrectly officiated and sent them into the league for review and explanation. In the 1990s, then-Packers coach Mike Holmgren would have his video staff put together a videotape to FedEx to the league.

“It’s still the same,” McCarthy said. “It’s just digital versus (tape). It gets there quicker.”

While technology might be better, McCarthy surely will find the league’s explanation unsatisfactory. The Packers, who were flagged for only one roughing-the-passer penalty all of last season (on defensive end Dean Lowry), have now been penalized four times for it through two games. Matthews, outside linebacker Nick Perry and defensive end Muhammad Wilkerson were all flagged in the opener against Chicago, and then Matthews was flagged again against the Vikings.

“It’s definitely a topic. I mean, we’ve had four in two weeks. Anytime patterns become abnormal, I mean, there’s a reason behind it,” McCarthy said. “The way that particular play is being officiated is different. But in Clay’s particular case, I felt that he did what he was coached to do.

“You’ve got to make sure you’re looking at all the variables. I’m not sure that all the variables are clear right now. You look at both of the penalties that were called in the game, the quarterbacks, they’re trying to throw the ball. I think that’s where a little bit of the gray area is in the judgment of the defender hitting the quarterback. Because I get what the goal is, and we’re all for the goal being achieved. But in the same breath we’ve got to make sure it’s not a competitive disadvantage to the pass rusher trying to hit the quarterback.”

In a crazy game at Lambeau Field on Sunday, the Green Bay Packers and Minnesota Vikings tied 29-29 as both teams missed opportunities to win. …

Fit to be tied: Aaron Rodgers toughs out knee injury but result feels ‘closer to' a Packers loss

What was most excruciating for Rodgers about Green Bay’s unfulfilling 29-29 tie with the Minnesota Vikings Sunday at Lambeau Field were the mistakes he’d made.

For three quarters, first-year coordinator Mike Pettine's defense gave every indication that it could pull its weight. Then the fourth quarter started.

Tom Oates: Grading the Packers' performance in tie with Vikings

State Journal columnist Tom Oates grades the Green Bay Packers' performance in their 29-29 tie with the Minnesota Vikings on Sunday at Lambeau Field in Green Bay.

The Packers used only two backs — Jamaal Williams and Ty Montgomery — during the first two games and the tandem has a combined 38 rushes for 144 yards (3.8-yard average) entering Sunday’s game at Washington.

In Kirk Cousins, Packers met a Vikings QB who could match Aaron Rodgers for a change

In a rivalry defined for 25 years by the Green Bay Packers' stability and the Vikings' desperation at quarterback, Rodgers encountered a new and worthy foe.

The Vikings didn't immediately add a replacement for Carlson, but head coach Mike Zimmer confirmed that free agent Dan Bailey was making his way to Minnesota for a physical exam.

After watching Aaron Rodgers survive — and thrive — against Vikings, Packers hope worst of QB’s knee problems are behind him

The hope is that Rodgers' sprained knee is less and less of an issue — and he doesn’t aggravate it — in the coming weeks.

The Rams received nine of the 12 first-place votes and 380 points in balloting by media members who regularly cover the NFL.

“I think we enjoy the protection below the knee and above the shoulders, but I don’t know many quarterbacks who want those calls,” Rodgers said as the Packers shifted gears Wednesday to their upcoming game at Washington.

Jason Wilde offers three keys for the Green Bay Packers in their Week 3 matchup with the Washington Redskins on Sunday at FedEx Field.

Tom Oates: Grading the Packers' performance in loss to Washington

Green Bay's 31-17 loss to Washington on Sunday at rain-soaked FedEx Field revealed every performance and personnel wart the Packers have.

Focus on roughing the passer giving NFL a black eye

There have been 34 roughing-the-passer calls so far, compared to 16 such penalties through three weeks last season and 20 the year before that.

Linebacker Clay Matthews was called for a roughing-the-passer on this play late in the fourth quarter of Green Bay's 29-29 tie with Minnesota on Sunday at Lambeau Field.

Clay Matthews protests after being whistled for a roughing-the-passer penalty on Vikings quarterback Kirk Cousins. “I thought I hit him within his waist to chest, I got my head across, put my hands down," Matthews said Sunday. 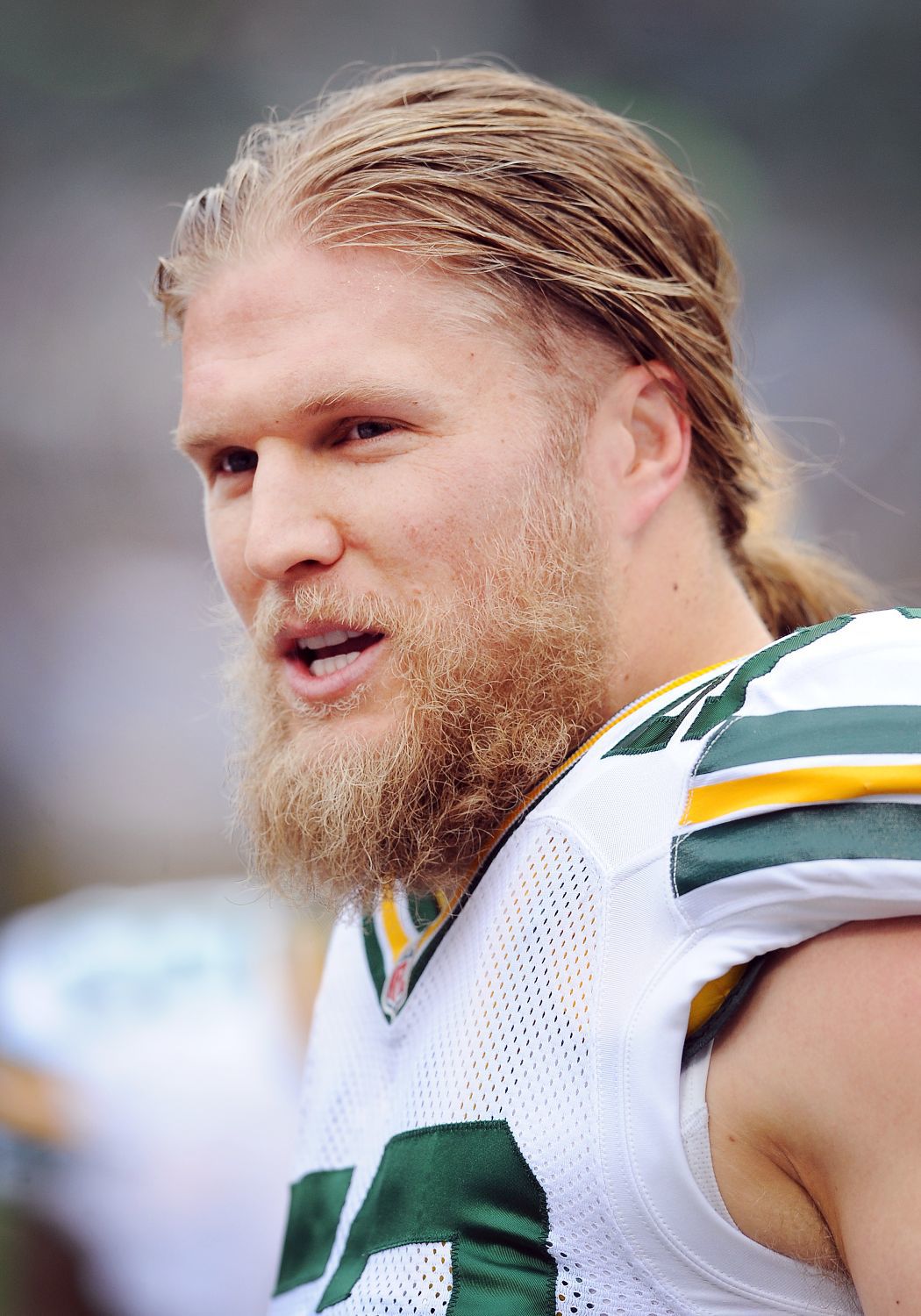