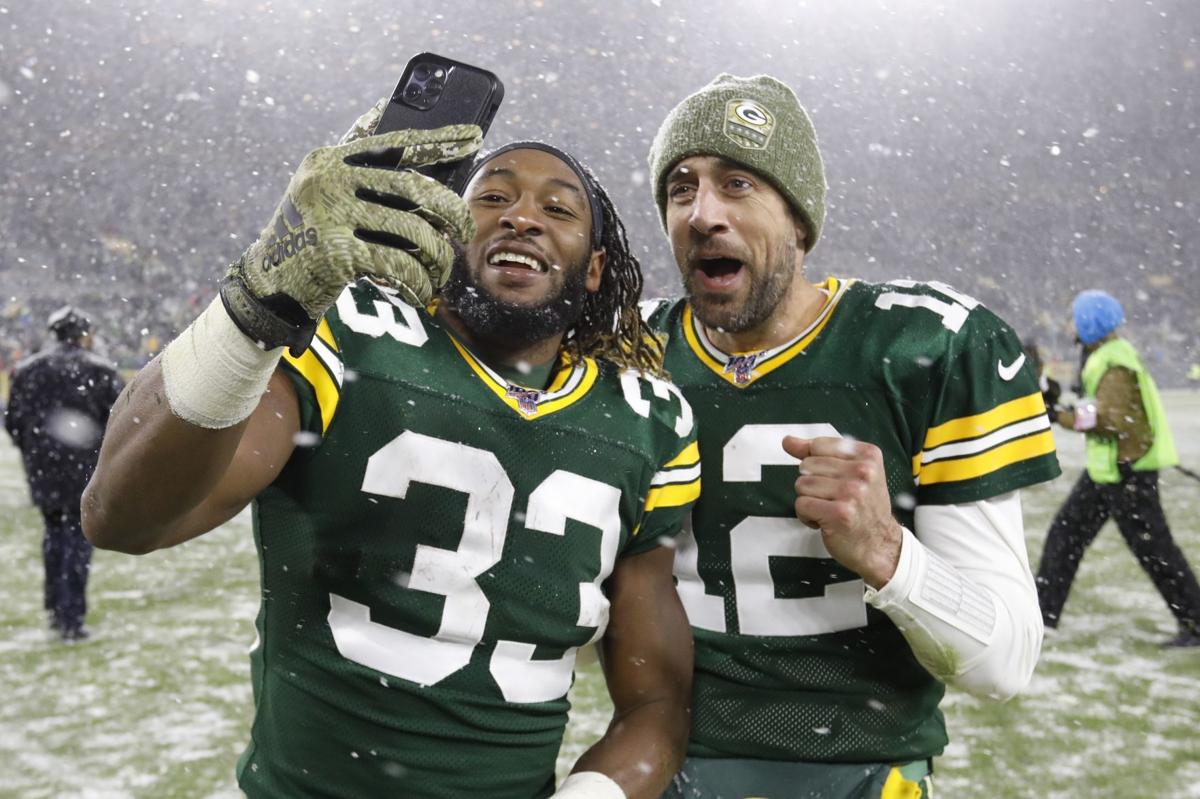 Aaron Jones and Aaron Rodgers take a selfie after the Packers' win over the Panthers last November at Lambeau Field. 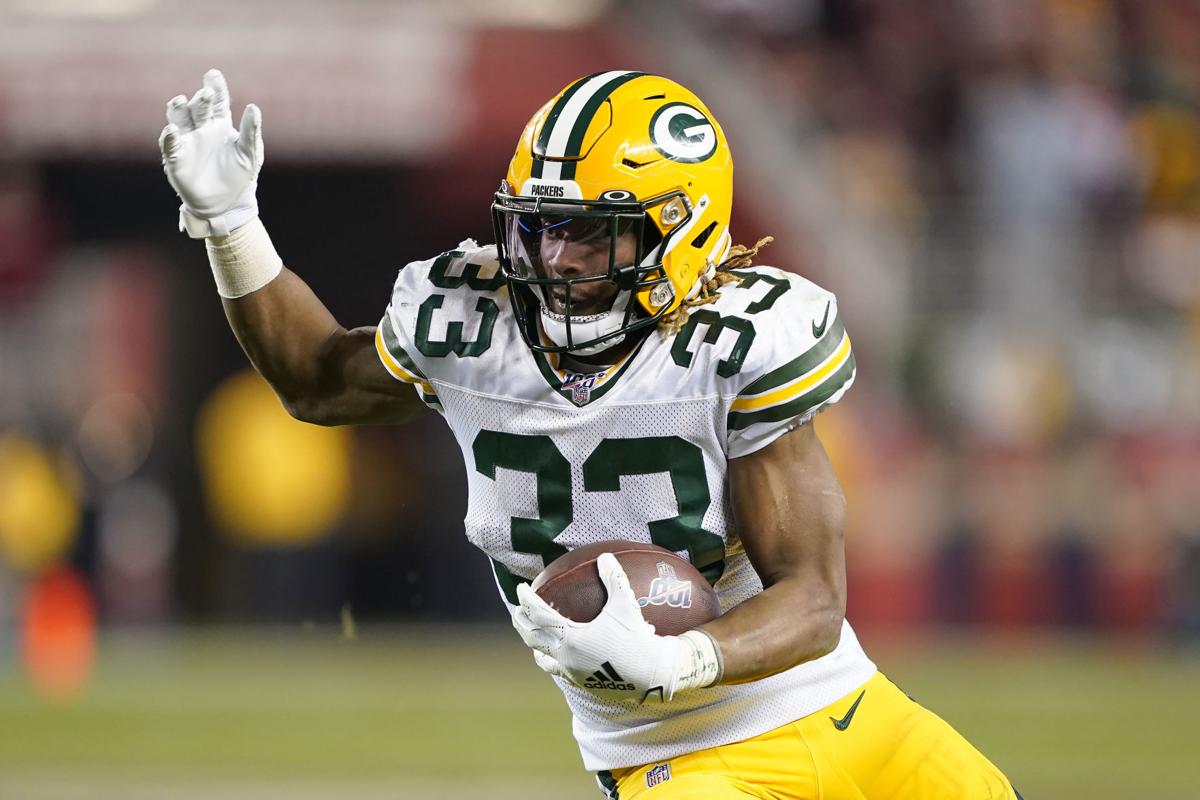 Aaron Jones rushed for 1,084 yards, had 1,558 total yards from scrimmage and tied for the NFL lead in touchdowns (19) last season.

GREEN BAY — As much that has been made about the Green Bay Packers selecting quarterback Aaron Rodgers’ heir apparent last month, he’s not the only Aaron who saw a potential replacement arrive via the draft.

Just as the Packers’ first-round selection of Utah State quarterback Jordan Love signaled the likelihood of Rodgers no longer being the team’s starting quarterback in the not-too-distant future, general manager Brian Gutekunst’s second-round pick of Boston College running back AJ Dillon has to be viewed as — at the very least — an indicator the team is prepping for life without running back Aaron Jones.

Jones is coming off a breakout season in which he eclipsed the 1,000-yard rushing mark for the first time (1,084), surpassed 1,500 total yards from scrimmage (1,558) and tied for the NFL lead in total touchdowns (19). But he also is entering the final year of his rookie contract, and as he spoke with Wisconsin reporters during a Zoom video conference call Wednesday from his hometown of El Paso, Texas, Jones insisted neither the arrival of Dillon nor his own contract situation will ratchet up the pressure on him in 2020.

“Whether it’s my first year or my last year on a deal, I’m going to be just as motivated,” Jones said. “It doesn’t change just because a contract is on the line for me. I’m going to continue to work and do everything in my power. I trust my agency and the Packers.

“With that, I would love to be a lifelong Packer. That’s my take on that.”

A fifth-round pick in 2017, Jones was terrific when healthy during his first two seasons, averaging 5.5 yards per carry and scoring 13 total touchdowns, bringing a vastly different element to the Packers’ underutilized running game under previous coach Mike McCarthy. But he only played in 12 games each of those first two seasons and ended both on injured reserve with knee injuries.

“Certainly, Aaron was dynamic for us,” Gutekunst said earlier this offseason. “Him and Davante, from an explosive play (standpoint), they were kind of carrying us a little bit there. So, I think I was impressed with his ability to stay healthy and stay out there.

“He certainly had more touches than he’s had (in previous seasons). So that proved a lot to us. He’s such important part of what Matt’s trying to do on offense. He’s a versatile piece. You can move him all around. Really makes it tough on defenses. So, really excited to see him in Year 2 of Matt’s offense, as well.”

Jones is set to earn a $2.147 million base salary this season, having earned a major pay raise through the league’s proven performance escalator. But with the running back market depressed in recent years — save for the four-year, $64 million extension Carolina’s Christian McCaffrey received earlier this spring and Dallas Cowboys running back Ezekiel Elliott’s six-year, $90 million deal signed last September — it’s hard to know what Jones’ earning power is.

And with the selection of Dillon in the second round, it’s not out of the realm of possibility that Jones might end up elsewhere in 2021, especially given the other key players who also are in the last years of their deals. That list includes left tackle David Bakhtiari, nose tackle Kenny Clark, cornerback Kevin King, center Corey Linsley and No. 2 running back Jamaal Williams.

Like Rodgers with Love, Jones said he is “excited to work with” Dillon and vowed to “help him as much as possible.” Jones said Dillon has been texting him for pointers on the playbook ever since the team’s virtual offseason program began.

Asked specifically about the addition of Dillon and how it impacts the running back position, Jones replied: “I mean, I know I have no control over that, so it doesn’t disappoint me to know they’re bringing in competition to keep the rooms competitive, to make sure everybody’s competing and just raise the level of competition. It’s not that I’m surprised or anything. It’s the NFL, and you never know what can happen.”

That’s also true of real life, as Jones became a father over the offseason when his girlfriend, Crystal Molina, gave birth to their son, Aaron Jr., on April 17.

As Packers ready — virtually — for Year 2 of Matt LaFleur's offense, will odd offseason stunt its growth?

Packers coaches are optimistic they will be able to advance the offense in a meaningful way despite the circumstances caused by the COVID-19 pandemic.

For Mike Pettine, defensive meltdown vs. 49ers was ‘beyond disappointing’ but can’t be ‘dark cloud’ that hangs over Packers in 2020

Packers' defensive coordinator Mike Pettine said the team's run defense must rebound and learn from what went wrong without experiencing a hangover from it.

Among the drawbacks of the Packers' virtual offseason: Aaron Rodgers and LaFleur haven't been able to make adjustments to the team's offensive language.

The rule was passed on a one-year experimental basis, and last month the NFL competition committee declined to endorse its renewal.

NFL owners tabled a proposal Thursday that would have given teams an alternative to the onside kick, the second consecutive year they have decided against addressing what has become a thorny issue.

He gets rid of those who don't fit his scheme or grasp the unit's intricacies quickly enough to carve out a role.

Aaron Jones and Aaron Rodgers take a selfie after the Packers' win over the Panthers last November at Lambeau Field.

Aaron Jones rushed for 1,084 yards, had 1,558 total yards from scrimmage and tied for the NFL lead in touchdowns (19) last season.