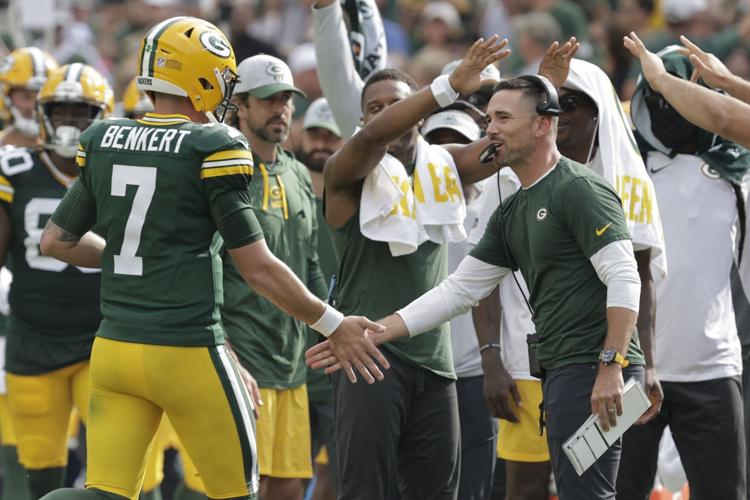 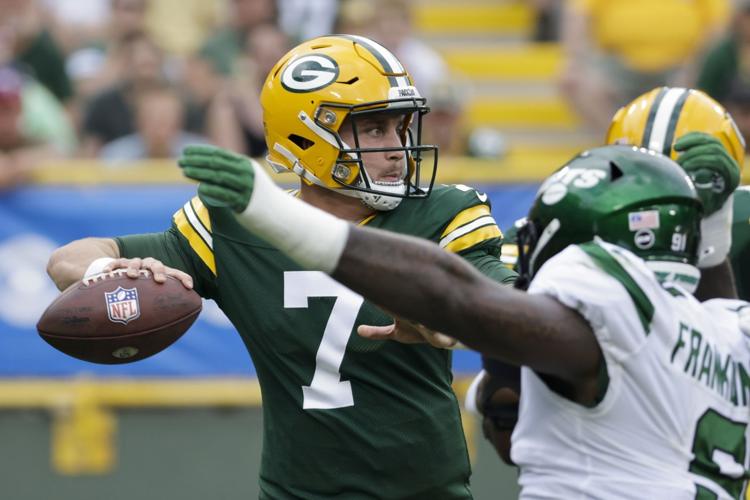 GREEN BAY — The Green Bay Packers do not have a quarterback controversy on their hands.

Certainly not with their starter — that complicated Aaron Rodgers fella is pretty secure in his spot atop the depth chart despite his offseason of discontent and his safety-first coach, Matt LaFleur, keeping him bubble-wrapped on the sideline throughout preseason play.

And not with their backup, either — despite third-stringer Kurt Benkert’s strong showing during the Packers’ 23-14 preseason loss to the New York Jets on Saturday afternoon at Lambeau Field.

While Benkert made the most of his unscheduled opportunity, getting the start with 2020 first-round pick and primary backup Jordan Love sidelined with a minor right/throwing shoulder injury, Benkert wasn’t getting any grand ideas afterward — even though his performance may have merited at least a passing thought about whether he’d be better prepared to back up Rodgers in the Sept. 12 regular-season opener at New Orleans if Love isn’t able to practice this week or play in next Saturday’s preseason finale at Buffalo.

“I know my spot, I know my role. I know I’m the ‘3’ guy,” Benkert said after he completed 18 of 25 passes for 151 yards with one touchdown and one interception (83.9 rating) after an impressive first half against most of the Jets’ No. 1 defense. “I just need to be ready if anything happens.

“(The No. 2 job) is not on my mind. I know my role, I know my spot. And for me, it’s just bringing value whatever way I can. I may not have to touch the field this year — that’s awesome, and I’ll follow 12’s lead and all that. But if I have to play, I’ll be ready and I’ll show that I can do what I can do. But that’s way out of my hands. I’m just here to bring value to everybody else and have a good time in the room.”

Benkert, who spent three seasons with the Atlanta Falcons and earned a spot on the Packers’ offseason 90-man roster during a tryout post-draft rookie camp, scarcely got any practice snaps during a Rodgers-free offseason where the coaches tried to maximize Love’s snaps in organized team activity practices and the mandatory minicamp. And he wasn’t exactly overworked during the first three weeks of training camp, either, as Rodgers took nearly all the starter reps and the coaches gave Love as much much-needed work as he could handle after his rookie season was basically a washout.

That changed last week, though, after Love suffered a muscle strain in his shoulder late in the first half of the preseason opener against Houston. Benkert ran the No. 2 offense in both joint practices with the Jets on Wednesday and Thursday, then got the start and played into the fourth quarter on Saturday — all work Love almost certainly would have gotten if healthy.

“I think Kurt has done a really nice job,” LaFleur said. “(His performance is) definitely going to make it tough on us to decide which way we want to go.”

Realistically, Benkert’s performance will impact whether general manager Brian Gutekunst will keep him on the 53-man roster as the third quarterback or cut him at the end of camp and try to re-sign him to the practice squad if he makes it through waivers unclaimed. LaFleur said after the game that while Love remains day-to-day, the team hopes he’ll practice during the week and play against the Bills.

“I think it’s (a question of) whether we keep two or three. Certainly, Jordan, I think has done a really nice job,” LaFleur clarified. “You’re always competing, but certainly I would say if we ever got into a situation, Jordan is definitely the No. 2.”

That may be, but the command, decisiveness and moxie Benkert showed against the Jets certainly made him look like a few other Rodgers-era backups who made strong impressions during preseasons past, like Matt Flynn and Tim Boyle.

“I think the great thing as you saw tonight, and we saw it during the week practicing against them, our 2s and 3s were out there on both sides of the ball against their 1s for most of the first half, and we held our own and played really well,” Rodgers observed during a second-half interview with the Packers TV network. “I’m proud of Kurt. I think he did a really nice job in the pocket, moving around, improving over the last time he was out there. I’m really happy for him. He’s a good young kid.“

He was certainly good in the first half — save for two awkward trip-and-falls from under center, which he ultimately overcame — as he directed a pair of touchdown drives. He finished the half 12 of 16 for 103 yards with one touchdown and no interceptions (112.2 passer rating), and of his four incompletions, two were third-down drops (one by Jace Sternberger, one by Malik Taylor) that would have converted first downs to keep drives alive but instead forced punts; an overthrown deep ball to Reggie Begelton; and a get-the-ball-out throwaway incompletion under pressure.

LaFleur said Benkert showed “good command,” the “ability to hang in the pocket” and made “some off-schedule plays” — all things LaFleur looks for at the position.

But Benkert, who said he kept any pregame jitters at bay on Friday by spending time with his wife Sam and their daughter Scout and with chores around the house (including laundry), might have shown the most after two gaffes that could have been his undoing.

On back-to-back plays early in a second-quarter drive, Benkert tripped and fell coming out from under center at the snap. Both times, it appeared rookie right guard Royce Newman either tripped Benkert or stepped on his foot, causing the tumbles.

While Newman could be an opening-day starter at the position and would have gotten a stern talking-to from Rodgers had he been at quarterback — ”I said to Royce, ‘I don’t know what our quarterback said to you, but you better get that you-know-what out of the way, because if I’m out there, we’re going to have some words, for sure,’” Rodgers said — Benkert was more forgiving and LaFleur put at least some of the blame on Benkert for his own footwork.

What mattered most was what happened after that. Facing third-and-8 from his own 32-yard line after the falls, Benkert zinged a 9-yard strike to Taylor to pick up the first down. Then, after a 10-yard holding penalty on guard Lucas Patrick, Benkert hit Begelton on a slant to convert a fourth-and-2. Benkert then threw a gorgeous 21-yard back-shoulder strike to Taylor to convert a third-and-5, then capped the drive with a perfectly-placed 5-yard TD pass to Sternberger on another third-down play.

“There was a lot of adversity on that drive,” LaFleur said. “Our guys’ ability to just overcome that adversity, I thought, was big time. Certainly, there’s a lot of plays that happen that it’s not necessarily how you draw it up, but again, it’s how you respond to whatever happens out there.”

“That was the longest drive of my life. I’ve never had that happen. It was wild,” he admitted. “(But) the thing that I’m most proud of is, that drive that could have went to crap, and it didn’t.

“I think that’s kind of a testament to how I like to play. Just keep on going. I threw a pick (in the third quarter), and it was just, get out the next drive and keep it going. Don’t be gun-shy because something went wrong.”

Asked if he felt he’d played his way onto the roster with his performance, Benkert paused.

“That’s a tough question,” he replied. “I feel like I’ve done everything that I could. I feel like I’ve put myself in pretty good position. But at the end of the day, I know it’s a numbers game.

“We’ll see what happens. But I’m excited with how I played, and obviously there’s still more room to grow.”

For James Morgan, Green Bay homecoming to face Packers is ‘going to be awesome’

The New York Jets quarterback participated in two joint practices with the Packers and will play Saturday night at Lambeau Field.

“I thought Royce did a really nice job (on Wednesday) and so he will get an opportunity to start the game on Saturday,” LaFleur said before Thursday’s practice.

With uncertain future, Aaron Rodgers focuses on enjoying this season: ‘I don’t want a farewell tour’

After an offseason of discontent and what he says was a legitimate consideration of retirement, the Packers quarterback is nearly a month into his 17th NFL training camp and again appears to be cherishing every step of the journey.

For Isaac Yiadom, could fresh start with Packers finally be right fit?

Packers concerned about star pass rusher Za’Darius Smith’s back, whether he’ll be ready for season

General manager Brian Gutekunst said Smith’s lack of practice time was not in any way connected to unhappiness with his contract, despite a Pro Football Talk report.

Packers' Krys Barnes does what he always does: Make the most of his opportunities

There’s only one would-be starter who has been on the field for the first defensive possession each of the first two preseason games: inside linebacker Krys Barnes.

After NFC title game ‘failures,’ Packers’ Kevin King stays put, ready to ‘uphold my side of the bargain’

“I really didn’t want to be nowhere else, to be honest,” King says. “I feel like we have the pieces to get over that hump. I just want to do my part in that, so I’m excited and I’m ready to go.”