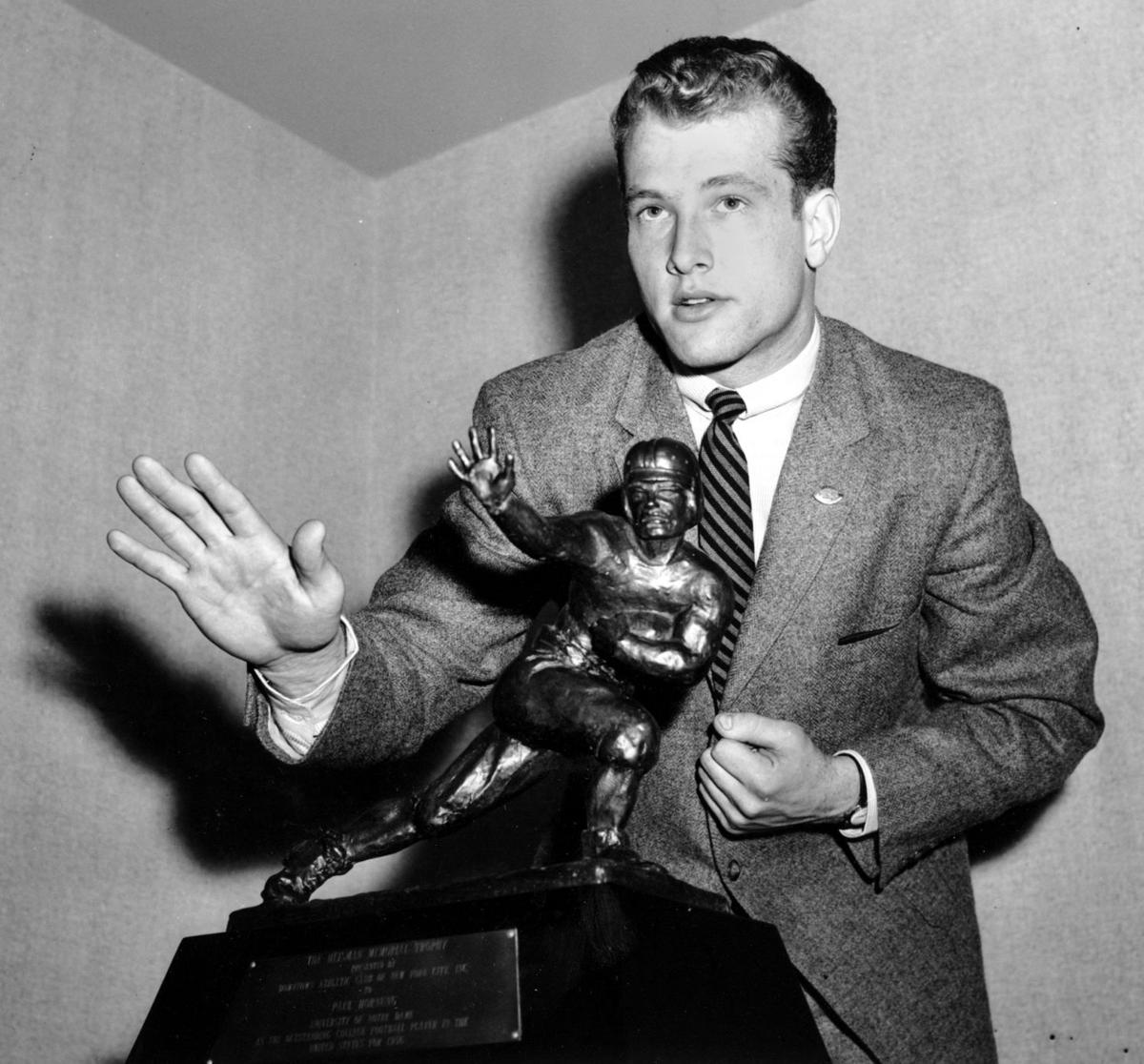 In this Dec. 12, 1956 file photo, Notre Dame quarterback Paul Hornung imitates the posture of the Heisman Trophy that he received at the Downtown Athletic Club in New York. The Notre Dame hype machine has produced a few unworthy Heisman winners but none more so than Hornung. He was a great player, but the Irish went 2-8. 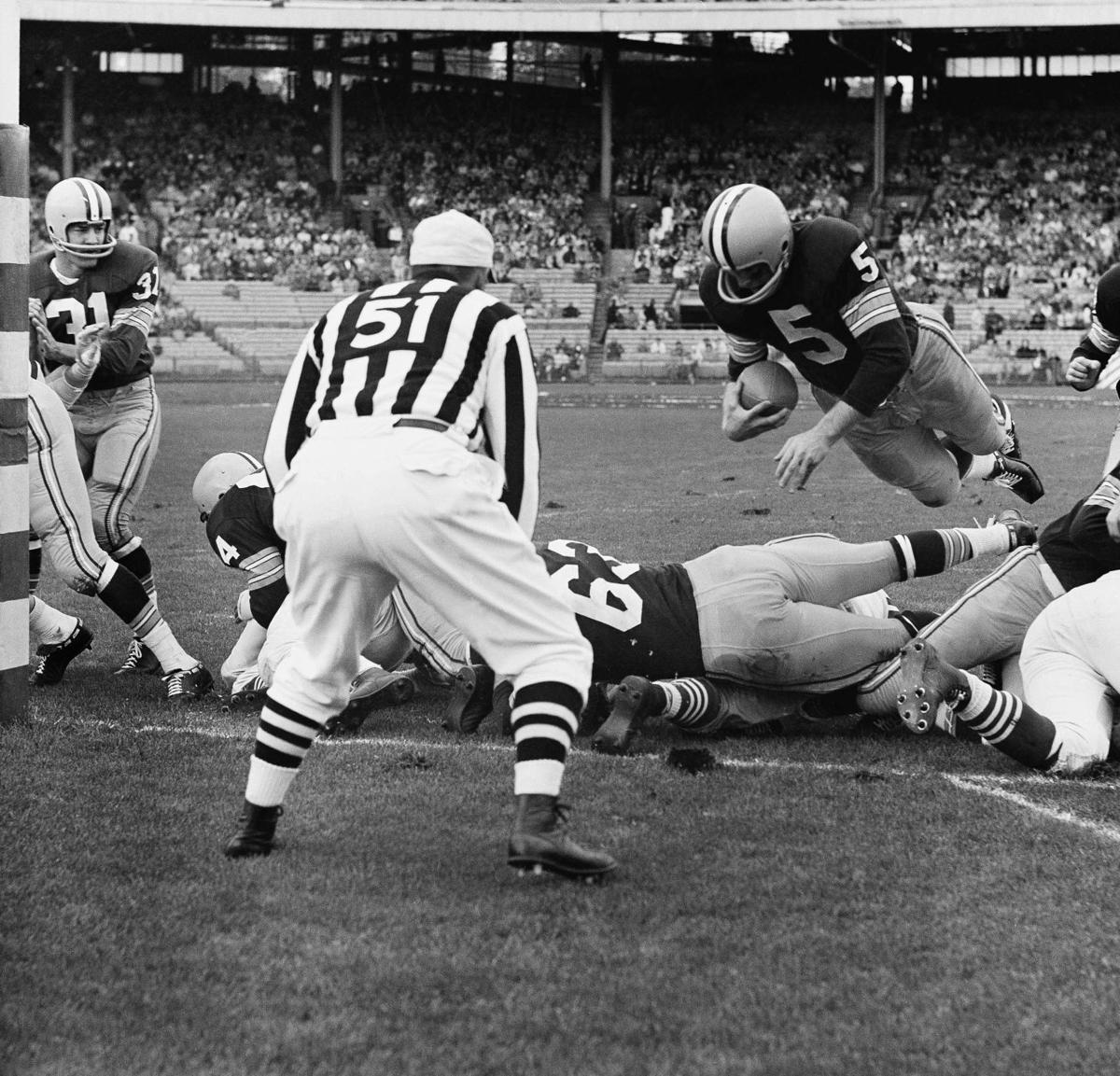 LOUISVILLE, Ky. — Terry Brennan was the head coach of the Notre Dame football team for just five seasons, but he had arguably the greatest player to ever don the navy and gold.

Paul Hornung was a standout at Flaget High School when Brennan first heard about the Louisville "Golden Boy" who showed a versatility that some say has never been duplicated.

"One of the coaches had some information on him and said he was really good and 'You better go down (to Louisville),'" Brennan remembered an assistant coach telling him. "So, I jumped in the car and went down there."

Brennan was a halfback on Notre Dame's national championship teams in 1946 and 1947 and was just 25 years old when he was hired as the Fighting Irish's head coach in 1954.

Hornung had the opportunity to play in his home state for Hall of Fame coach Bear Bryant at the University of Kentucky but felt Notre Dame gave him his best shot to thrive.

"If you were a quarterback back in those days, you wanted to go to Notre Dame and to become successful," Hornung said in a 2016 interview with the Heisman Trophy Trust. "I would not have won the Heisman Trophy on a 2-8 season at any other school in America except Notre Dame. Notre Dame won it as much as anything else."

The Louisville native was known for his dazzling play on the field and developed a reputation for being wild off it.

Brennan was just seven years older than Hornung, but he said he never had any problems.

"That was exaggerated," he said of Hornung's reputation. "He was not a bad kid. He was a character, yes, but a good character. He was an outstanding kid. There were some phony quotes about him."

Due to Notre Dame's administration cutting scholarships because they wanted to focus more on academics than athletics, Brennan said with a laugh Hornung "had to do almost everything out there in the backfield because he didn't have any help."

But that didn't bother his star player much.

In Hornung's Heisman Trophy-winning season in 1956, he led the team in passing, rushing, scoring, kickoff and punt returns and punting. He also played defense, where he was the leader in pass breakups and was second in interceptions and tackles.

"He was a 60-minute performer," his coach said.

To date, Hornung is the only Heisman winner to win the award while playing for a team with a losing record. He is also one of seven players from Notre Dame to win the award.

"That tag will always be number one, 'former Heisman Trophy winner,'" Hornung once said. "It's special. It's special in the game of football."

Hornung went on to be the No. 1 overall pick in the 1957 NFL draft with the Green Bay Packers and won four league championships in six years. He was dubbed "the most versatile man ever to play the game" by legendary Packers coach Vince Lombardi.

Packers at 100 | Tom Oates: Despite all that divides Wisconsin, Packers bring us together

Brennan coached just two more seasons at Notre Dame before he was let go, despite compiling a 32-18 coaching record.

He's now 92 and "above the grass," he said, quarantining in a retirement home in Chicago amid the COVID-19 pandemic.

When Hornung died last Nov. 13 at 84 after a long battle with dementia, Brennan was informed by his six children.

It had been about 10 years since the coach last saw his former player when they met for dinner in Chicago. They hoped to meet in Louisville for the Kentucky Derby, but it was difficult to work out due to Brennan's age.

His memory is sharp for 92, but there's some things he might forget.

Paul Hornung is not one of them.

Photos: Take a look back at life of Packers legend Paul Hornung

Herb Adderley, the Hall of Fame cornerback who joined the NFL as a running back and became part of a record six championship teams with the Packers and Cowboys, has died. He was 81.

Hornung's lawsuit alleges that football helmets that he wore during his professional career in the 1950s and '60s failed to protect him from brain injury.

Ron Kostelnik played for the Packers for eight seasons from 1961 to 1968 and helped the team win five NFL championships and the first two Super Bowls.

In this Dec. 12, 1956 file photo, Notre Dame quarterback Paul Hornung imitates the posture of the Heisman Trophy that he received at the Downtown Athletic Club in New York. The Notre Dame hype machine has produced a few unworthy Heisman winners but none more so than Hornung. He was a great player, but the Irish went 2-8.