Gary Peterson: Packers have big advantage at QB, but 49ers are better team
Share this
Return to homepage × 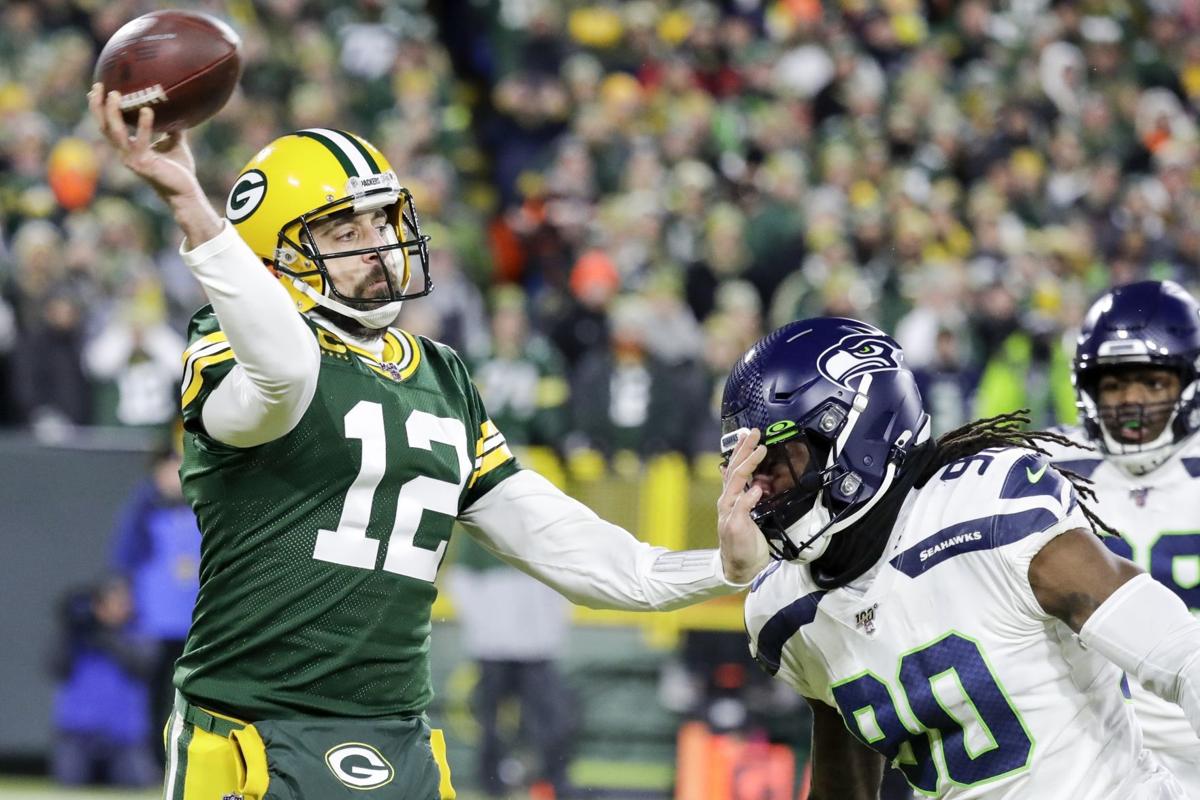 Packers quarterback Aaron Rodgers passes while being rushed by Seahawks defensive end Jadeveon Clowney during the first half of Green Bay's 28-23 win on Jan. 12, 2020, in Green Bay. 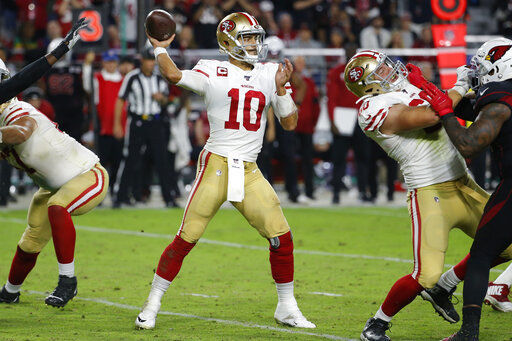 San Francisco 49ers quarterback Jimmy Garoppolo (10) throws against the Arizona Cardinals during the second half on Thursday, Oct. 31, 2019, in Glendale, Ariz. The 49ers won 28-25.

Early this week, Rob Reischel, who contributes to Forbes magazine, checked in with a take that will not play well in the Aaron Rodgers Fan Club.

"Not many people are giving the Green Bay Packers a chance in Sunday's NFC Championship Game," Reischel wrote. "The 49ers routed the Packers, 37-8, back in Week 12. San Francisco is an early 7-point favorite. And the 49ers seem to have the edge at several different positional groups."

To pull off "a shocking upset," he added, "Rodgers must play at an all-world level. Using history as an indicator, though, the odds of that seem rather remote."

Reischel points out that in three NFC Championship games, Rodgers is 1-2 with a passer rating of 70.5, far below his career rating of 104.2. Furthermore, Reischel wrote, Rodgers, who hails from Chico, a three-hour drive from the Bay Area, has played in four "homecoming" games (Sunday's will be the fifth). He is 1-3 — including a playoff loss in 2013 and last November's ritual slaughter.

So, put the champagne on ice?

You're new here, aren't you?

This is the postseason, where everyone has a rooting interest and is pretty darned sure they know how the game is going to unfold.

But can they, given the polar opposites who will line up under center? Rodgers is a well-known and well-liked commodity. He's fun to watch and is on the way to the Hall of Fame.

His opposite number, 49ers quarterback Jimmy Garoppolo, is largely an unknown quantity. Put it this way: Jimmy G has started 20 regular season games in his career, only three more than Rodgers' 17 postseason games.

Does that mean there is nothing to learn about the G-man?

You haven't met the nice folks at PFF.com, a statistical service. About the same time Reischel was putting his Rodgers tome to bed, PFF.com's Sam Monson took a critical look at Jimmy Garoppolo in a story headlined "(The) San Francisco 49ers are a Jimmy Garoppolo mistake away from disaster."

Hey, tell us what you really think.

"Including the playoffs, Garoppolo has 14 interceptions and 21 turnover-worthy plays (TWP) by PFF's charting," Monson wrote. "His turnover-worthy throw rate isn't among the worst in the league, but only 13 quarterbacks put the ball in harm's way more often, and it's by far the worst rate of any of the remaining quarterbacks on championship weekend."

Monson dives so deep on Garoppolo that you'd think he would need an Aqua Lung. Among his observations: Jimmy G struggles to see linebackers at the intermediate level, he has a turnover-worthy play rate of 6.9% when throwing into coverage of linebackers. Monson concludes, "The 49ers are strong favorites against the Packers, but that margin could evaporate in an instant if Garoppolo continues to misread what's in front of him."

So there you have it. The veteran two-time MVP in one huddle, and the up-and-comer preparing for his first flight to the sun in the other.

Now that we have a full accounting of the of the alleged shortcomings of Sunday's starting quarterbacks, a parting thought — more than any other sport, football is a team game.

We are sharing Wisconsin State Journal writers' favorite work from 2019. From Packers reporter Jason Wilde: When I started on the Packers beat for the State Journal in 1996 — the first of 13 consecutive seasons I covered them for the paper — I had three really great mentors in Green Bay: State Journal Packers beat writer Kent Youngblood, State Journal columnist Tom Oates, and Tom Mulhern, who was at the Appleton Post-Crescent at the time but would later spend more than two decades at the State Journal covering the Packers and University of Wisconsin football. Among the many lessons I learned from them at that young age of 24 was what an incredible responsibility we bore to chronicle the journey of each team we covered each season. Every journey was different, but covering it was no more or less important based on how the season went or how far the journey took that team. In ’96, it took the Packers to New Orleans and the Super Bowl XXXI title, the historic franchise’s first championship since the 1960s glory days.

Now in Year 4 of my second tour of duty covering the Packers for the State Journal thanks to sports editor Greg Sprout, the 2019 season has been — and continues to be, as the Packers ready themselves for an NFC Divisional playoff game at Lambeau Field on Jan. 12 — a fascinating journey. And it has nothing to do with the franchise celebrating its 100th birthday in August. (Although that was quite the accomplishment. And you should’ve seen the cake.)

From the team hiring Matt LaFleur as its new head coach, to the arrival of flamboyant and dominant pass rusher Za’Darius Smith (and his brother-from-another-mother fellow outside linebacker Preston Smith) in free agency, to 36-year-old Aaron Rodgers’ and the 40-year-old LaFleur’s work-in-progress offense and relationship, it’s all somehow gotten the Packers to a 13-3 record and into the postseason — something Super Bowl-winning head coaches Vince Lombardi, Mike Holmgren and Mike McCarthy couldn’t do in their first seasons.

For my five selections, I tried to pick stories that reflected key mileposts in the 2019 Packers’ journey.

For the past three decades, Brett Favre and Aaron Rodgers have done their best to live up to Bart Starr’s ideals. And while that’s not always the easiest thing to do, their success has given the Packers something no other NFL team can claim in the past century: three Hall of Fame-level quarterbacks.

So, did you hear "woo guy?" Twitter erupted during Sunday night's televised football game between the Green Bay Packers and Seattle Seahawks b…

The Packers are one win away from a berth in Super Bowl LIV in large part because of the moves general manager Brian Gutekunst has made, both large and small.

The Packers defense has been stout since being picked apart by the 49ers in a 37-8 rout in November.

George Kittle's 197 catches and 2,664 yards receiving rank as the most ever by a tight end through three seasons, but it's his ability as a run blocker that truly sets him apart.

The Packers' trip to San Francisco with a Super Bowl berth on the line is treated as all business.

Hot? Not? However you view Packers' Aaron Rodgers, he has Super Bowl in his sights

At age 36 and nine years removed from his last trip, Aaron Rodgers seemed amused Wednesday that many of his younger teammates have taken up a win-one-for-the-old-guy mantra on his behalf.

49ers looking to reach historic turnaround with win over Packers

With a victory in the NFC championship game, the Niners will become the second team in NFL history to make the Super Bowl a year after losing at least 12 games.

Again in playoffs, Aaron Rodgers facing off with Richard Sherman

In the eight times their teams have played each other, Aaron Rodgers has completed only 13 passes for 138 yards against Richard Sherman, targeting him just 23 times.

5 keys for 49ers in NFC title game vs. Packers

With a mostly young roster, a quarterback going through his first full season as a starter and a head coach appearing in the NFC Championship for the first time at his position, handling pressure will be a huge key for the 49ers.

With the Green Bay defense failing to lay a hand on 49ers running back Raheem Mostert for much of the first half and the Aaron Rodgers-led offense committing two turnovers and failing to convert a third down yet again during a scoreless first 30 minutes, the Packers dug themselves a 27-0 halftime deficit on their way to a demoralizing 37-20 loss.

With the Green Bay Packers struggling to keep pace with the San Francisco 49ers Sunday night in a battle for a Super Bowl berth, veteran actor…

Packers notes: Despite loss, 2019 was ‘special’ season for Aaron Rodgers ‘because it became fun again’

Tom Oates: Loss to dominant 49ers proves Packers still have lots of work to do after promising season

In the end, the message was clear. The Packers made great strides this season under first-year coach Matt LaFleur and showed they can compete with every other team in the NFC, but they're not in the 49ers' league. Not yet, anyway.

Packers quarterback Aaron Rodgers passes while being rushed by Seahawks defensive end Jadeveon Clowney during the first half of Green Bay's 28-23 win on Jan. 12, 2020, in Green Bay.

San Francisco 49ers quarterback Jimmy Garoppolo (10) throws against the Arizona Cardinals during the second half on Thursday, Oct. 31, 2019, in Glendale, Ariz. The 49ers won 28-25.