GREEN BAY — Davante Adams evidently got the news Monday morning: He would not be playing in the Green Bay Packers’ prime-time matchup with the Atlanta Falcons at Lambeau Field because of his lingering hamstring injury — an injury he clearly believed was sufficiently healed.

What came next was out of character enough for the Packers three-time Pro Bowl wide receiver that those who’ve covered his seven-year NFL career wondered if his Twitter account had perhaps been hacked.

“Sorry fans and friends I won’t be on the field tonight,” Adams wrote at 8:40 a.m. Central time. “I've done everything I need to do and proved I’m ready but I guess I don't know my body as well as others. Good luck out there my boys.”

The Tweet remained on Adams’ page for roughly 45 minutes before he deleted it. In an iMessage after the Tweet was posted but before it was removed, Adams confirmed to the State Journal that he had indeed written it and his account had not been compromised. He then declined to discuss on the record his feelings or frustration with not playing.

Presumably, Adams felt the team needed him against the Falcons given that No. 2 wide receiver Allen Lazard, who had six catches for a career-high 146 yards and a touchdown at New Orleans last week, is on injured reserve following surgery to repair a core muscle injury. With Adams and Lazard out, the Packers had Marquez Valdes-Scantling, Malik Taylor, Darrius Shepherd and Reggie Begelton at wide receiver Monday night.

Adams, who caught a franchise single-game record 14 passes for 156 yards and two touchdowns in the Packers’ Sept. 13 season-opener at Minnesota, injured his hamstring during the team’s Sept. 20 victory over Detroit, in which Adams had just three receptions for 36 yards before the injury.

Packers head coach Matt LaFleur had said last week that he and the team’s medical staff wanted to give Adams every opportunity to play in the team’s Sept. 27 win at New Orleans, despite him not practicing at all that week. But after working out before the game, Adams was inactive.

"That was the plan all week long was to get a good feel to see how I felt come pregame, just to give me all the time I needed, and came to the conclusion that I wasn't quite ready yet," Adams said last week. "It was close. I felt good, but I wanted to be as smart as possible, so we decided to hold off on that."

Adams was able to take part in Thursday, Friday and Saturday’s practices leading up to Monday night’s game and appeared hopeful when he spoke with reporters via a Zoom video call at midweek. But he also said during that interview that he needed to be 100%.

“I’m going to make sure I’m 100% before I’m back out there,” Adams said. “I will be making sure I feel normal — like before it happened — before I step out there. So we’re doing our thing to make sure that that’s the case.”

Whether the Packers medical staff felt Adams wasn’t fully healthy or if Adams’ own threshold on being able to play changed after Lazard’s injury came to light is hard to say.

“Obviously Davante’s a big part of our offense, and he’s a lot of times at the focal point of where we’re trying to go with the ball,” LaFleur said at midweek. “But we’ve got other guys, too, that can make plays. And that’s one thing that when he is out, that has to happen.”

No matter how perturbed Adams was with the decision, it reinforced the Packers medical staff’s reputation for being conservative with players — something veteran offensive lineman Billy Turner experienced during the first two weeks of the season after an Aug. 30 knee injury suffered in practice sidelined him. Turner maintained during a Zoom call during the week that he could have played before last week’s game against the Saints.

“There have been a lot of injuries that I’ve played through that I was not supposed to be able to play through at all,” Turner said. “With that being said, we’ve got a great medical staff here in Green Bay — some of the best doctors in the country, in the world.

“So it is a tough line to walk, especially for someone like me, when you know that you’re capable of playing. But it’s their job to essentially protect you from yourself at times. Yeah, it’s tough, but, at the same time, that’s where trust comes into play. You just trust that they are making the correct decision.”

Green Bay Packers coach Matt LaFleur says his years working for Dan Quinn on the Atlanta Falcons’ staff helped him understand how to lead a team that could enjoy itself while contending for championships.

In the aftermath of a 13-3 season in which the offense found success in fits and starts, the early returns in 2020 indicate Matt La Fleur and Aaron Rodgers are hitting their groove.

The positive test results keep coming for the Tennessee Titans in the NFL’s first outbreak of COVID-19, and they're not alone anymore with the league postponing the New England Patriots-Kansas City Chiefs due to positive tests on both teams.

Three weeks is still a small sample size, but the standings have revealed a clear boost for NFL visiting teams in the mostly fan-less 2020 season.

Without scheduling flexibility of other sports, COVID-19 looming large over NFL

Unlike in baseball, pro football teams can't play doubleheaders to make up postponements. Yes, they can play on a Sunday and then a Thursday night — once during a 16-game schedule.

Aaron Rodgers likes what he's seeing from second-year wide receiver Darrius Shepherd, who is expected to play a big role Monday night against the Atlanta Falcons.

Facing a Green Bay offense Monday that leads the NFL in scoring and ranks second in total offense, the Falcons will limp in to Lambeau Field with five starters ailing on a unit that's given up a league-high 36 points per game.

With Allen Lazard out and Davante Adams not yet 100%, Packers face wide receiver concerns

The Packers lost Allen Lazard following a core muscle injury that required surgery, and there’s no guarantee Dwight Adams’ injured hamstring will be back to full health in time for Monday night's game.

After blowing two-touchdown leads in the final period each of the last two weeks, the Falcons could have trouble getting ahead Monday night when they visit the unbeaten Green Bay Packers.

The Falcons’ decimated defense was no match for Aaron Rodgers in a 30-16 loss to the unbeaten Green Bay Packers (4-0).

After Bears offense struggles under Nick Foles, what now for Chicago?

In a messy 19-11 home loss to the Indianapolis Colts on Sunday, the Bears offense was disjointed. Discombobulated. Disappointing. 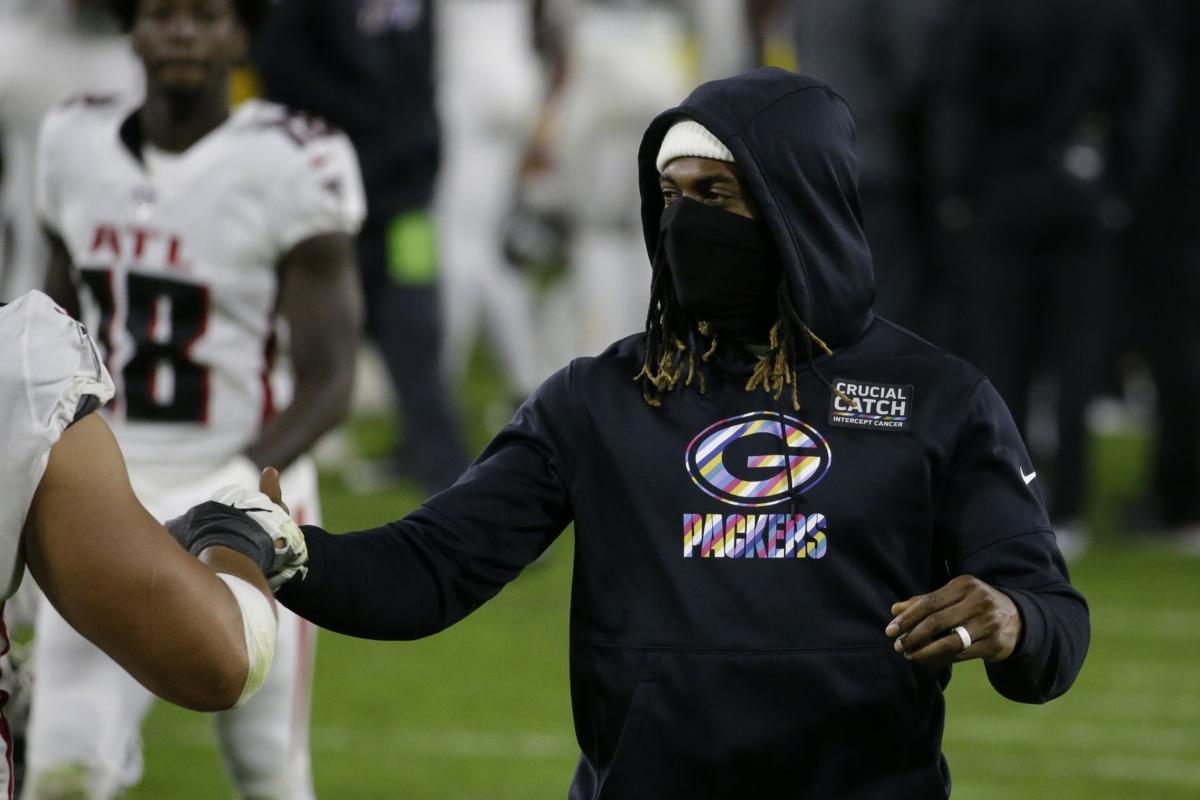 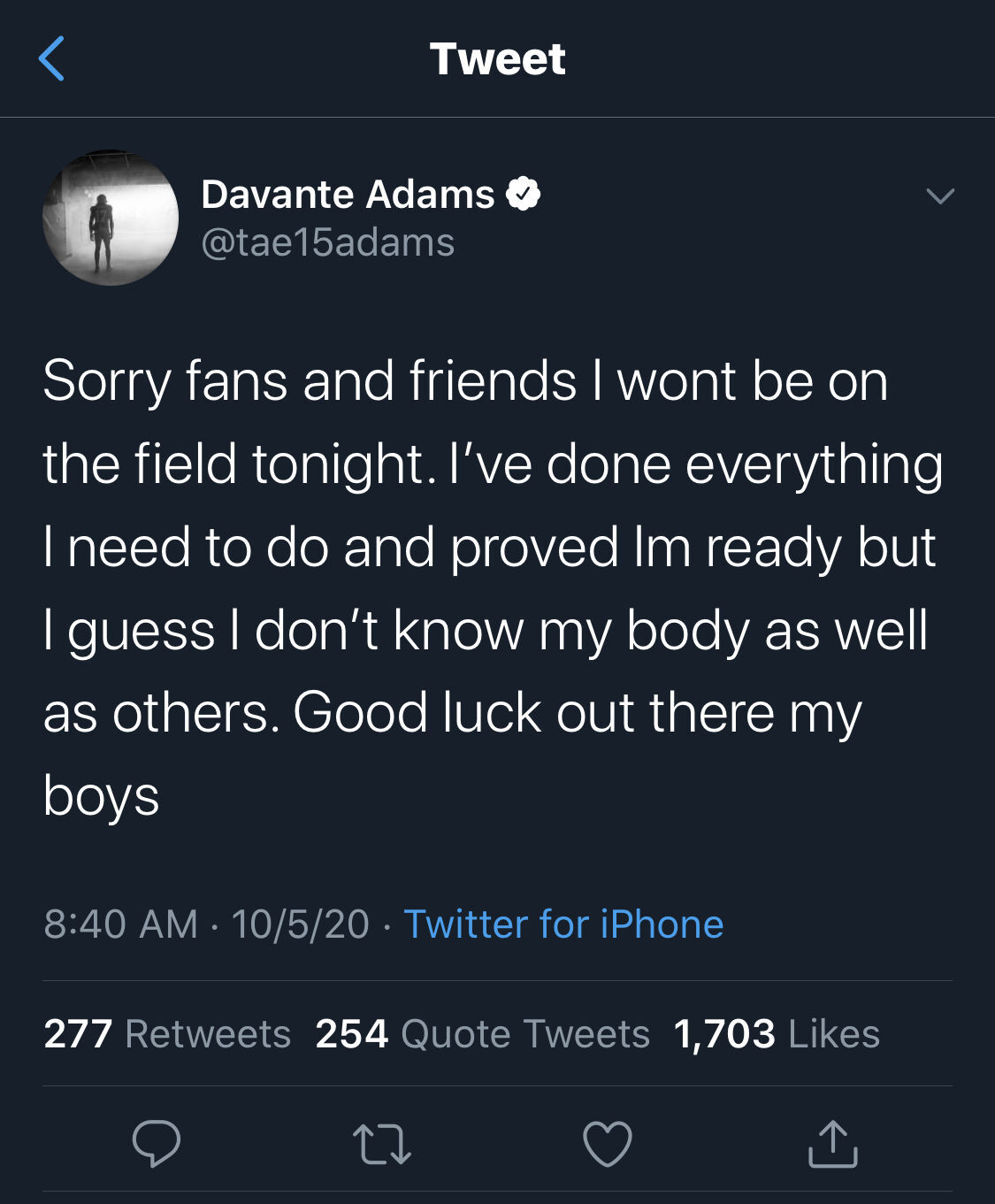