After realizing his dream of reaching the NFL, Chris Borland gave up the game after just one season. And he says one doctor's work played a key role in his difficult decision.

The former University of Wisconsin linebacker, who retired from professional football in 2015 after his rookie season with the San Francisco 49ers, shared his praise of Dr. Ann McKee, a Wisconsin alumnus, in a piece he wrote for Time's "The 100 Most Influential People of 2018."

"Dr. McKee’s groundbreaking work on chronic traumatic encephalopathy (CTE) was central to my decision, and she may have saved my life," Borland wrote in the piece.

"At the very least, her work has likely spared me much of the suffering we see today among former NFL players."

Borland, who played for the Badgers from 2009-14, was a third-round draft pick by San Francisco in 2014 and contributed 107 tackles, one sack and two interceptions.

As a senior with the Badgers, Borland was named Big Ten Conference Defensive Player of the Year and a first-team All-American by the Football Writers Association of America.

The 27-year-old's piece in Time also discussed some of the criticism McKee has faced with her research.

"She is reviled by the old boys’ club of a multibillion-dollar industry," Borland wrote. "Punishment for doing your job well is an unparalleled professional pressure.

"Yet Dr. McKee shows up to work every day. She shares her findings. And she tells the truth, however uncomfortable."

It was a freak hit — a blow to the back of University of Wisconsin fullback Austin Ramesh’s helmet by an opposing Illinois player. Ramesh desc…

Former Badgers linebacker Chris Borland, brothers to participate in Pat’s Run for After the Impact Fund

Chris Borland, who retired from the NFL following his rookie season with the San Francisco 49ers due to fear of long-term brain damage, will run alongside his two military brothers, Captain Joe Borland and Major John Borland, to raise funds for After the Impact, an organization that pairs military veterans with NFL retirees.

For Chris Borland and other ex-football stars, pain was part of transition to life after sports

Mitch Henck: Parents will determine the fate of football

The former Badgers player worked with American Provenance to create a gift box, from which the proceeds will benefit the Gridiron Greats Assistance Fund.

The Concussion Legacy Foundation will present the retired football player with its Impact Award on Nov. 4 in Boston.

Badgers football: Chris Borland's decision to step away still confusing to some — but not to him

Borland spoke with a number of medical experts and made certain he was thorough before making a final call on his future.

The linebacker announced his retirement last month after one NFL season, citing the potential for brain injuries.

Years ago Rush Limbaugh called me a liberal sportswriter, suggesting I was the harbinger of death to football in America.

Coming off of a rookie season in which he led his team in tackles, Borland says he no longer believes football is worth the risk.

A look at football players in the Big Ten this spring who are poised to have standout seasons beginning this fall:

Tom Oates: Predicting all 32 selections of the 2018 NFL Draft first round

With the first round of the 2018 NFL draft in the books, take a look at the strengths and weaknesses of the 32 newest members of the league.

The concussion question: Exploring the effects of head trauma on football players 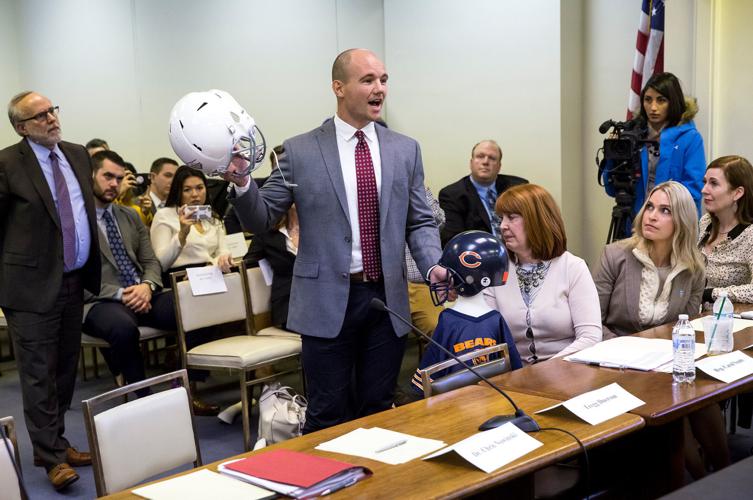 In this March 1, 2018, Chris Borland, a former NFL linebacker and Big Ten Defensive Player of the Year for the University of Wisconsin, testifies before a Illinois House Mental Health Committee hearing about high-impact sports. 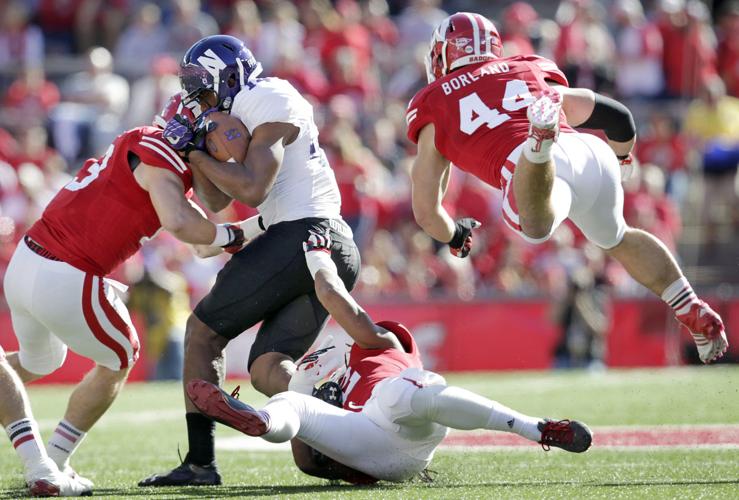 Wisconsin Badgers linebacker Chris Borland (44) sails through the air towards the action, as linebacker Conor O'Neill (13), left, and safety Dezmen Southward (12), bottom take down Northwestern Wildcats wide receiver Christian Jones (14) on a first down pass play in the first quarter at Camp Randall Stadium in Madison on Oct. 12, 2013. 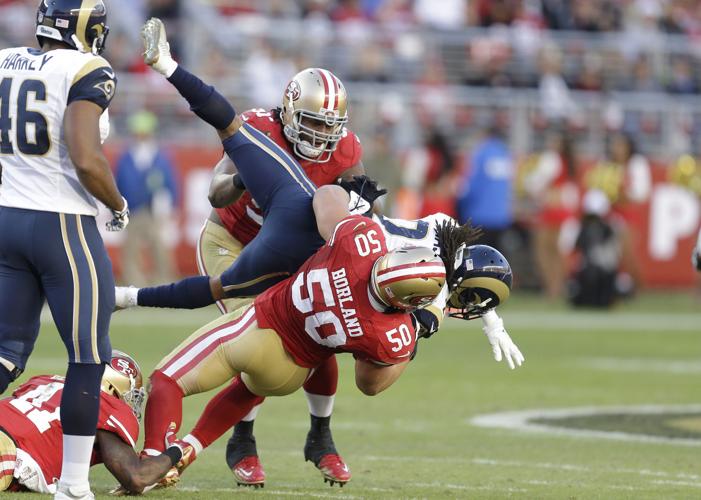 San Francisco 49ers inside linebacker Chris Borland tackles St. Louis Rams running back Tre Mason during the fourth quarter of an NFL football game in Santa Clara, Calif., on Nov. 2, 2014. Borland, a third-round draft pick out of the University of Wisconsin, retired from the NFL in 2015 after his rookie season.