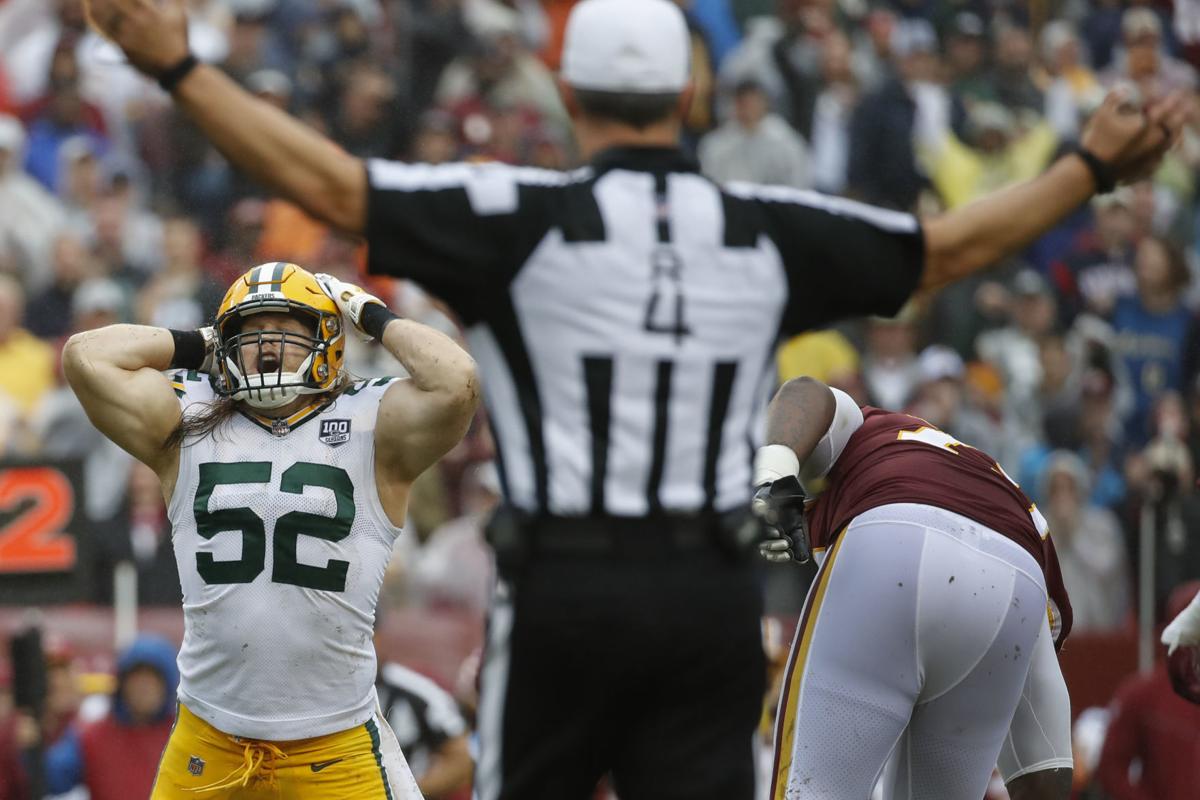 Packers linebacker Clay Matthews reacts to his penalty after tackling Washington quarterback Alex Smith during the second half of Green Bay's 31-17 loss to Washington on Sunday, Sept. 23, 2018 at FedEx Field in Landover, Maryland. 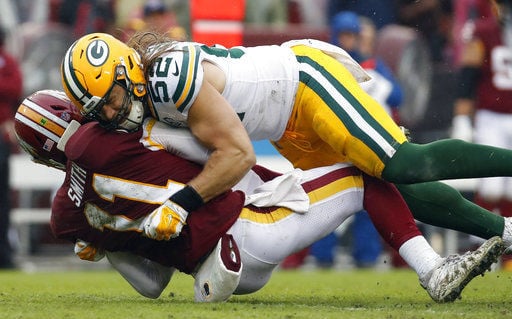 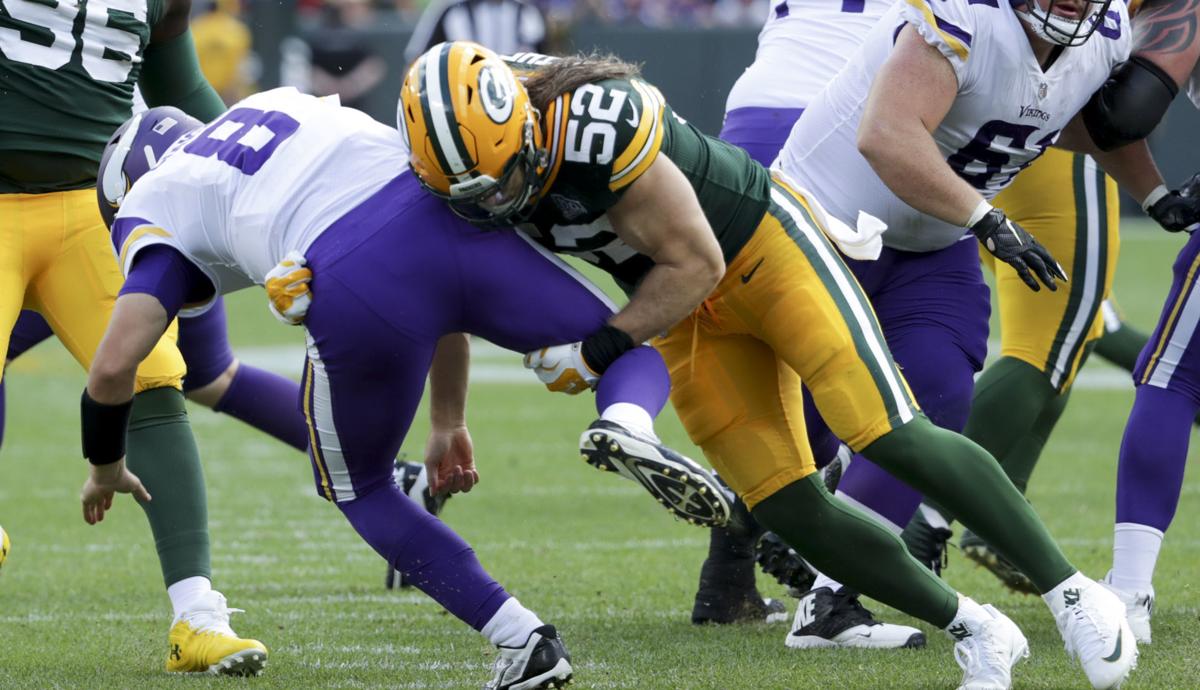 Green Bay Packers linebacker Clay Matthews was called for roughing the passer on Minnesota Vikings quarterback Kirk Cousins on this play late in the fourth  quarter on the 29-29 tie between the teams on Sunday Sept. 16, 2018 at Lambeau Field in Green Bay.

The NFL is getting roughed up over its amplified enforcement of roughing-the-passer penalties that has generated head-scratching calls — and a season-ending injury to a defender trying to comply with the league's mandate not to land fully on the quarterback.

So the league dusted off a rarely invoked 24-year-old rule that outlaws defenders from landing on the quarterback with more than half of their body weight.

"It helps me out because I'm a quarterback," said Deshaun Watson of the Texans. "But some of the calls are just kind of crazy."

So inconsistent, in fact, that Packers linebacker Clay Matthews, who has been whistled three times, suggested the league has gone soft. He argued that what constitutes a clean hit is anybody's guess nowadays.

Defenders who are only allowed to target a strike zone basically consisting of the torso now must also concern themselves with breaking the quarterback's fall. Or at least doing a "gator roll" where they spin the QB as they tumble to the turf.

The gator roll is "an unnatural move when you are trying to tackle a big guy" like Ben Roethlisberger or Andrew Luck, said Bengals defensive coordinator Teryl Austin. "They will shrug you off."

Broncos linebacker Shane Ray said the gator roll isn't even an option much of the time.

"Sometimes you're at an awkward angle or you might be pushed into him," Ray said. "It's chaotic in there when you've got all these bodies flying around."

Trying to keep the quarterback safe can also be dangerous to a defender, as it was Sunday when Dolphins DE William Hayes tore his right ACL trying to avoid landing on Raiders QB Derek Carr.

"They don't care about the rest of us getting hurt. Long as the QB is safe," fumed 49ers cornerback Richard Sherman when he retweeted a video clip of Hayes getting hurt.

There have been 34 roughing-the-passer calls so far. While that works out to just one flag for every 100 pass attempts, it represents a massive increase over previous years. There were 16 such penalties through three weeks last season and 20 the year before that.

The lack of consistency and clarity is why "I don't like the rule," said Fox's Troy Aikman, whose Hall of Fame career was cut short by the battering he took during a 12-year stint as Cowboys quarterback.

"I think the league overreacted, and I think they will continue to look at it with the controversy that's been created," Aikman said, adding the strict interpretation of the 1995 rule "changes the outcome of games and ultimately will cost some coaches their jobs."

There's only been a handful of flags, meanwhile, for players lowering their helmet, another point of emphasis, showing that players, coaches and officials have all adjusted accordingly to that rule change.

Two people with knowledge of the agenda told The Associated Press that in the regularly scheduled competition committee conference call next week, the roughing-the-passer calls will be discussed. While neither anticipates a change in the rules themselves, it's possible a de-emphasizing of the "full weight" portion of the rule could occur.

That point of emphasis this year has led to all kinds of contentious calls, none more prominent than Matthews' seemingly legal hit in Week 2 that wiped out a clinching interception of Kirk Cousins, who subsequently rallied the Vikings to a 29-29 tie.

"Roughing the Passer calls are absolutely out of control," Texans star defender J.J. Watt tweeted during the Steelers-Buccaneers Monday night game that featured four such flags.

Although Matthews' hit on Cousins wasn't deemed a body weight violation, the league's emphasis on roughing calls clearly played a role in referee Tony Corrente ruling that when Matthews "hit the quarterback, he lifted him and drove him into the ground."

Many critics didn't buy that explanation nor the justifications for the other calls.

"I love the NFL - but it's crazy the (numbers) being put up by QBs & WRs due to fact that D can't hit them anymore & can't lay hands on them downfield," tweeted Hall of Famer Kurt Warner, the architect of the Rams' "Greatest Show on Turf."

"Everyone is running free the entire game (or it's a penalty)! Don't get me wrong I LOVE Offense, but better when it's a fair fight."

The last two men who served as the NFL's head of officiating - Mike Pereira and Dan Blandino - said the league went too far in emphasizing roughing the quarterback and will back off soon because officials are throwing too many flags on plays where the QB isn't even in danger of getting hurt.

"I think we all have felt like it has gone a little too far," said Pereira, now an analyst for Fox Sports.

Pereira said the NFL could tamp down the furor over the rule by having officials only throw flags when defenders lift the quarterback and drive him into the ground - although he disagrees that's what Matthews did to Cousins.

"We all are pretty much in agreement the Clay Matthews hit on Kirk Cousins really shouldn't be a foul, and I believe that's what the competition committee believes," Pereira said. "How literal do we need to interpret a rule?"

Former NFL referee Terry McAulay, now an analyst for NBC, notes the focal point needs to be on whether the defender's hit included "unnecessary" actions. He refers to a graphic of the rule used on Sunday night's Patriots-Lions telecast.

"We've highlighted a couple of words. One is the word 'unnecessarily,' and it says a defender should not unnecessarily land on the quarterback," McAulay explained. "There is nothing about this play (by Matthews on Alex Smith) that is unnecessary. He's coming off a block and he makes a legal form tackle, and he just happens to end up on top of the quarterback."

The graphic also notes "strive to wrap up."

"That tells me that it needs to be avoidable. Well, there's nothing unavoidable about this play," McAulay said. "It just shouldn't be a foul. I understand technically that it is by rule."

Broncos star Von Miller, who leads the league with 87 1-2 sacks since his rookie year in 2011, said he's not sure how he's supposed to tackle the quarterback anymore, so he'll just stick with his signature move.

Because going for the sack is becoming as perilous for the pass rusher as it is for the quarterback.

Watch the best plays from the Week 3 matchup between the Green Bay Packers and Washington Redskins.

Watch as NFL Network's Brian Baldinger breaks down the Washington Redskins victory in Week 3 matchup against the Green Bay Packers.

After yet another roughing-the-passer penalty, Packers search for answers

The NFL is showing no signs of changing what it considers an undue hit on the league’s marquee players — its quarterbacks.

Green Bay's 31-17 loss to Washington on Sunday at rain-soaked FedEx Field revealed every performance and personnel wart the Packers have.

Adrian Peterson ran for 120 yards and a pair of 2-yard scores, Alex Smith threw two touchdown passes and Washington held on for a 31-17 victory over a gimpy Aaron Rodgers and the Packers.

There are sure to be more questions and more debate around the NFL about what constitutes a penalty on such plays.

Vikings coach Mike Zimmer said during his weekly radio show Wednesday that Sendejo was told by an official after the play that he did everything right on the tackle.

“I think we enjoy the protection below the knee and above the shoulders, but I don’t know many quarterbacks who want those calls,” Rodgers said as the Packers shifted gears Wednesday to their upcoming game at Washington.

NFL stands by controversial call against Clay Matthews, will use hit as example of what not to do

A league source said Monday afternoon that not only does the NFL officiating department believe referee Tony Corrente was right when he flagged Matthews for his hit on Vikings quarterback Kirk Cousins, but that the play will be used as a teaching tool in the weekly video the league office sends to its 32 teams to emphasize various rules and how they are enforced.

The NFL is sticking with its officiating emphasis on quarterback hits, including those in which the tackler uses all or most of his body weight when falling on the quarterback.

The linebacker says the NFL can’t “seem to get out of its own way.”

Jason Wilde offers three keys for the Green Bay Packers in their Week 4 matchup with the Buffalo Bills on Sunday at Lambeau Field in Green Bay.

It was supposed to be different under first-year defensive coordinator Mike Pettine, but while the Packers have acquired roughly half the world’s supply of cover cornerbacks since last season, they did very little to bolster their pass-rushing group and they’re paying the price for that decision.

Tom Oates: Grading the Packers' performance in win over Bills

State Journal columnist Tom Oates grades the Green Bay Packers' performance in their 22-0 victory over the Buffalo Bills on Sunday at Lambeau Field.

On a day where the offense was ‘terrible,’ Packers’ ‘tremendous’ defense leads way to 22-0 win

While Aaron Rodgers may have been irritated by the Packers’ poor offensive showing during Sunday’s 22-0 shutout victory over the Bills at Lambeau, don’t let his frustrations with what happened on his side of the ball obscure what happened on the other side of it.

Packers notebook: More mobile Aaron Rodgers takes it on the run, but knee still an issue

Rodgers scrambled five times in the Packers' 22-0 win over the Bills for 31 yards, including a 15-yard run, and was able to extend plays and get out of the pocket more like he has in the past.

Rodgers wasn't buying the notion that everything that ailed the Packers during the first three games suddenly was fixed. And if Rodgers isn't buying it, we shouldn't, either.

Watch as J.J. Watt has fun with Philly fans before Texans fall to Eagles

Houston's J.J. Watt took time out of his pregame preparations Sunday morning to play a quick game of catch with a group of Philadelphia Eagles fans at Lincoln Financial Field.

Packers linebacker Clay Matthews reacts to his penalty after tackling Washington quarterback Alex Smith during the second half of Green Bay's 31-17 loss to Washington on Sunday, Sept. 23, 2018 at FedEx Field in Landover, Maryland.

Green Bay Packers linebacker Clay Matthews was called for roughing the passer on Minnesota Vikings quarterback Kirk Cousins on this play late in the fourth  quarter on the 29-29 tie between the teams on Sunday Sept. 16, 2018 at Lambeau Field in Green Bay.