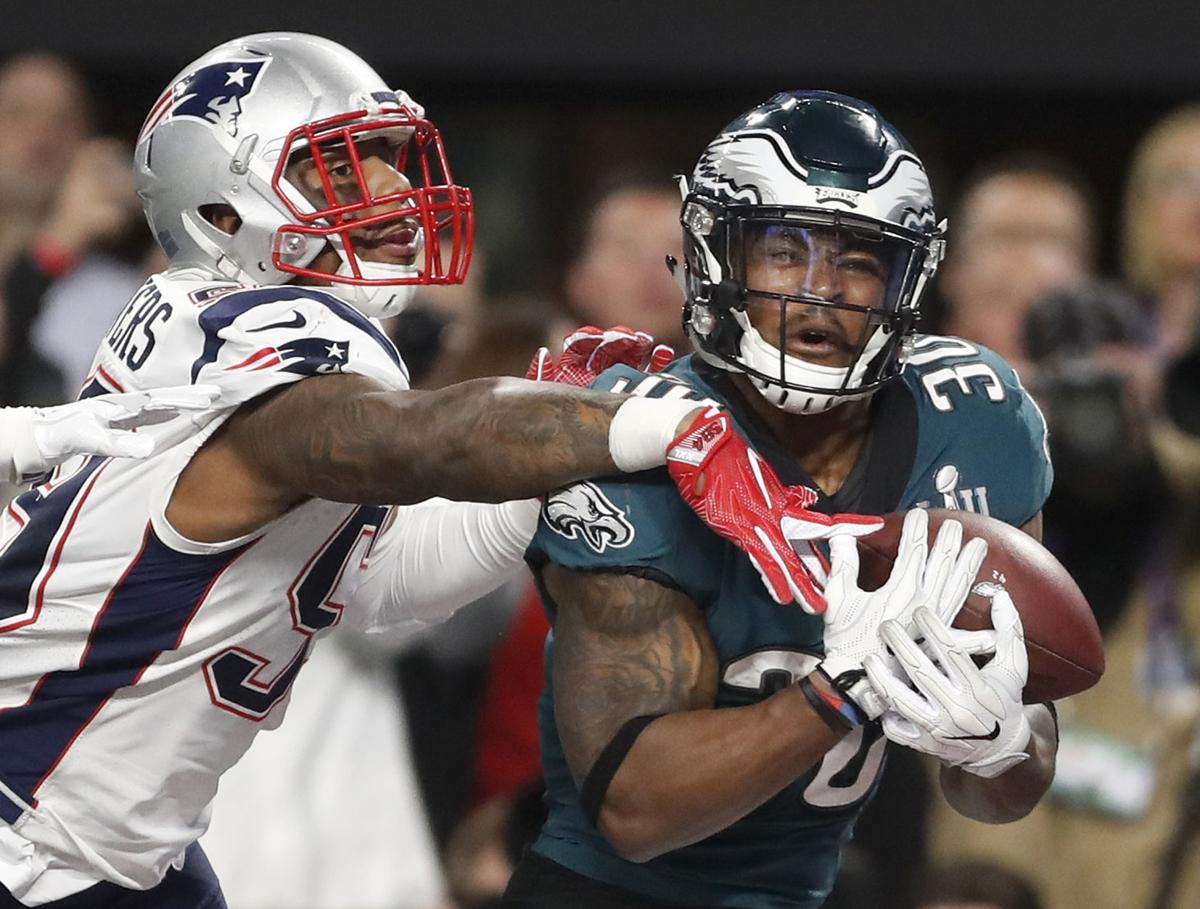 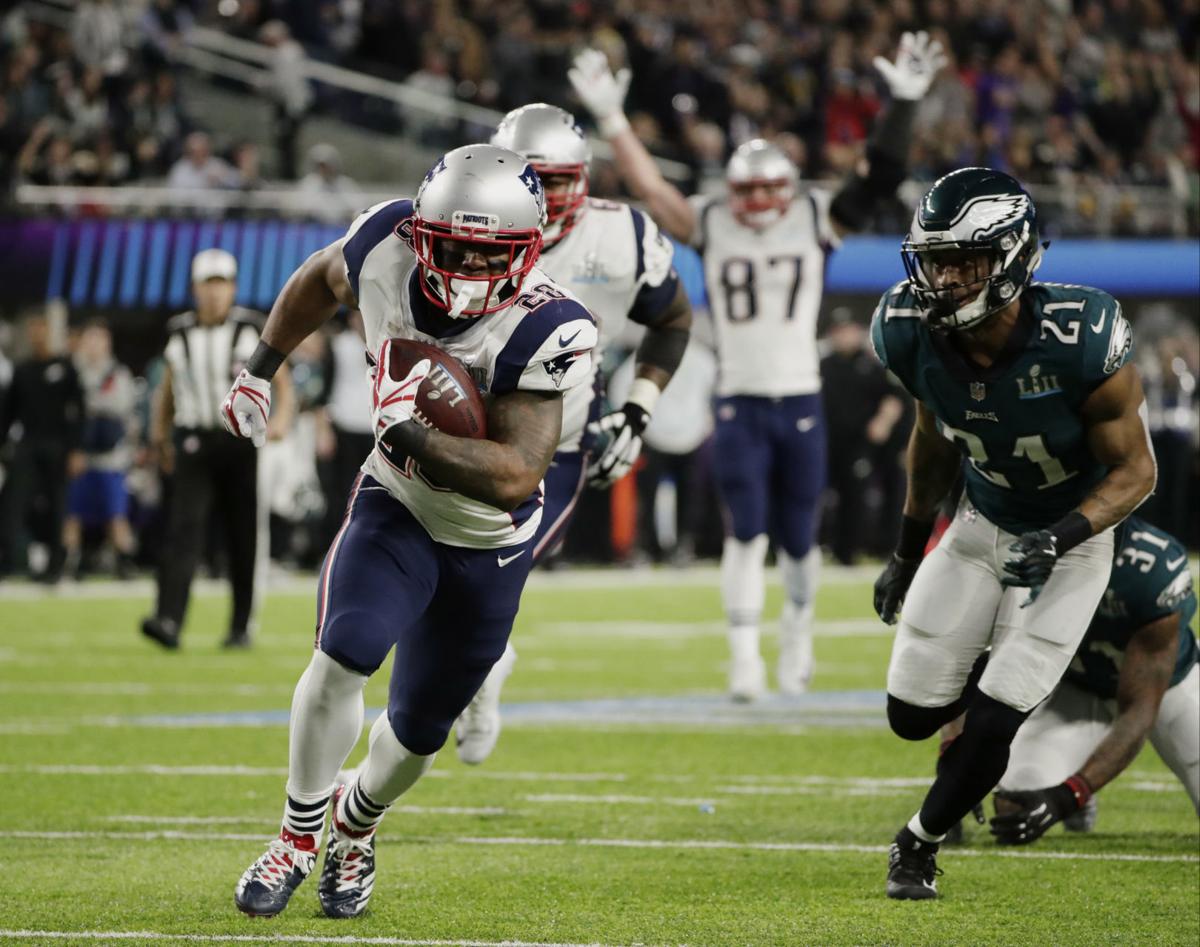 New England Patriots running back James White (28) runs to the end zone for a touchdown, during the first half of the NFL Super Bowl 52 football game against the Philadelphia Eagles Sunday, Feb. 4, 2018, in Minneapolis. (AP Photo/Frank Franklin II) 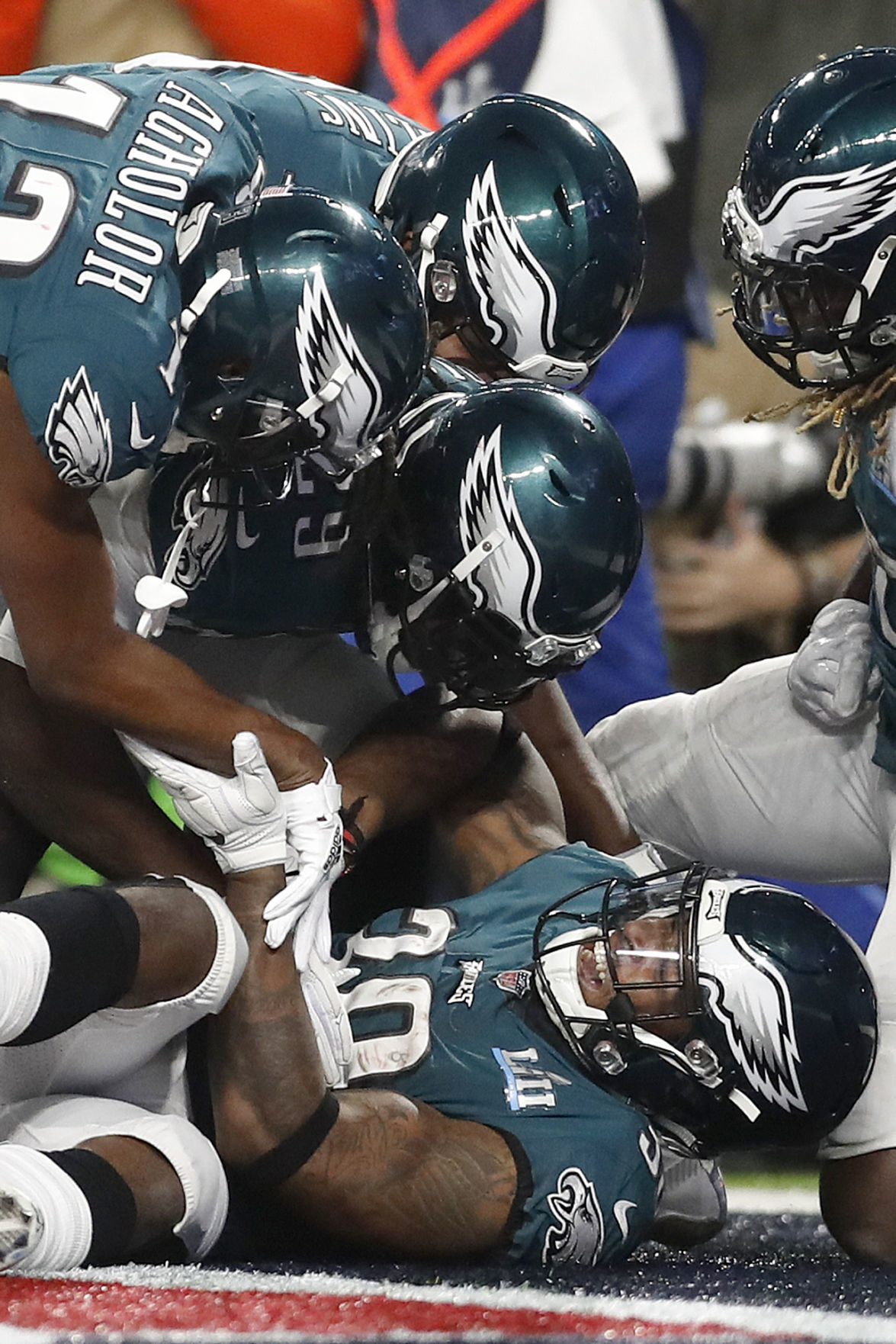 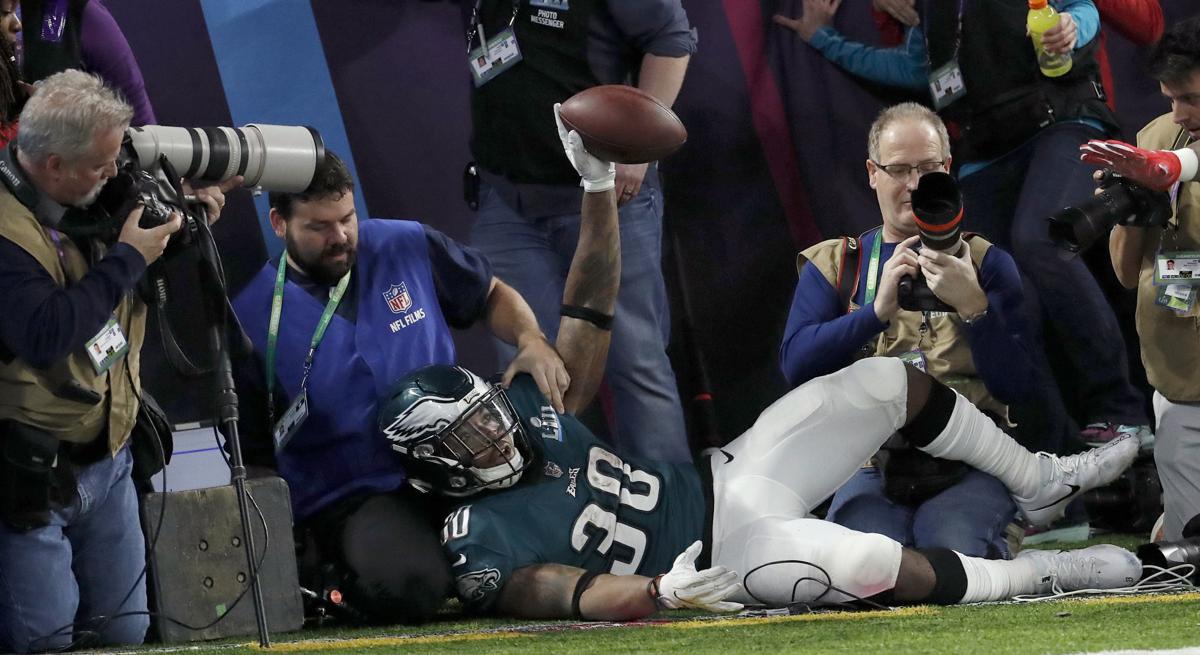 Philadelphia Eagles' Corey Clement crashes into photographers after catching a touchdown pass during the second half of the NFL Super Bowl 52 football game against the New England Patriots Sunday, Feb. 4, 2018, in Minneapolis. (AP Photo/Matt York)

MINNEAPOLIS — Corey Clement caused a stir in the Philadelphia Eagles’ 41-33 victory over the New England Patriots in Super Bowl LII on Sunday night.

The rookie running back from the University of Wisconsin hauled in a 22-yard touchdown pass from Nick Foles to put Philadelphia up 29-19 with 7:48 remaining in the third quarter.

Clement got two feet in bounds before his toe on his third step touched the white line at the back of the end zone.

The play was called a touchdown on the field, and appeared to be the correct call.

But when it went to review, NBC announcers Al Michaels and Cris Collinsworth each felt strongly that Clement’s catch would be overturned incomplete. They felt Clement’s slight bobble of the ball meant he hadn’t established possession until his second step and therefore had gotten only one foot in bounds before touching the white line.

Still, the touchdown was part of a breakout effort for Clement, who ran just three times for 8 yards but caught four passes for 100 yards and a touchdown. His 55-yard catch was the longest play of the game.

“I said, ‘Please don’t take this from me,’ because you never know when those moments are going to come back,” Clement said.

Clement also was on the field for the fourth-and-goal gadget play that gave the Eagles a 10-point lead in the second quarter.

As Foles went to “talk” to the right side of the offensive line, Clement took the direct snap out of the shotgun. He pitched the ball to tight end and former college quarterback Trey Burton, who threw to a wide open Foles for the 1-yard touchdown.

“Yeah, that was something we’ve been working on, and Doug (Pederson) and I were talking, and he was like, ‘Let’s just run it.’ It was a good time,” Foles said. “And the end was a little wider than I thought, so I was like, ‘I really need to sell like I’m not doing anything.’ ”

• The Eagles’ roster included former Badgers Chris Maragos, a special teams ace who is out for the season with a knee injury, and defensive tackle Beau Allen, a Minnesota native from nearby Minnetonka. Allen had two tackles, including one solo.

White, who scored three touchdowns and a 2-point conversion in the Patriots’ Super Bowl win last year, led the Patriots in rushing with 45 yards on seven carries and caught two passes for 21 yards. White broke several tackles with a brilliant 26-yard run early, giving him seven touchdowns in his past four postseason games.

Patriots quarterback Tom Brady is the first quarterback (regular season or playoffs) to lose a game with more than 500 passing yards, three or more touchdowns and zero interceptions, according to NFL Research. ... The past nine winners of the NFL’s MVP award to reach the Super Bowl lost the game, including Brady twice. ... The Patriots allowed their most points (41) and total yards (538) of any playoff game under coach Bill Belichick. ... The Patriots were hurt in the second quarter when wide receiver Brandin Cooks (concussion) was knocked out of the game.

Regardless of who wins when the Los Angeles Rams face off with the New England Patriots in Super Bowl LIII, it will mark the sixth straight ye…

Eagles fly away with Lombardi Trophy for first time

Nick Foles guided the drive of a lifetime, Zach Ertz made a bobbling touchdown catch that had to survive replay review, and an exhausted defense came up with not one but two stands in the final moments Sunday for a 41-33 victory.

Nick Foles did his best Tom Brady impersonation, leading a late-game comeback to cap a season that began as a backup and ended as Super Bowl MVP for the Philadelphia Eagles.

National Signing Day likely won't have quite the pomp and circumstance as it once did.

Tyrone White died in a crash in Florida on Sunday that left his wife and James' mother Lisa White in critical condition.

New England Patriots running back James White (28) runs to the end zone for a touchdown, during the first half of the NFL Super Bowl 52 football game against the Philadelphia Eagles Sunday, Feb. 4, 2018, in Minneapolis. (AP Photo/Frank Franklin II)

Philadelphia Eagles' Corey Clement crashes into photographers after catching a touchdown pass during the second half of the NFL Super Bowl 52 football game against the New England Patriots Sunday, Feb. 4, 2018, in Minneapolis. (AP Photo/Matt York) 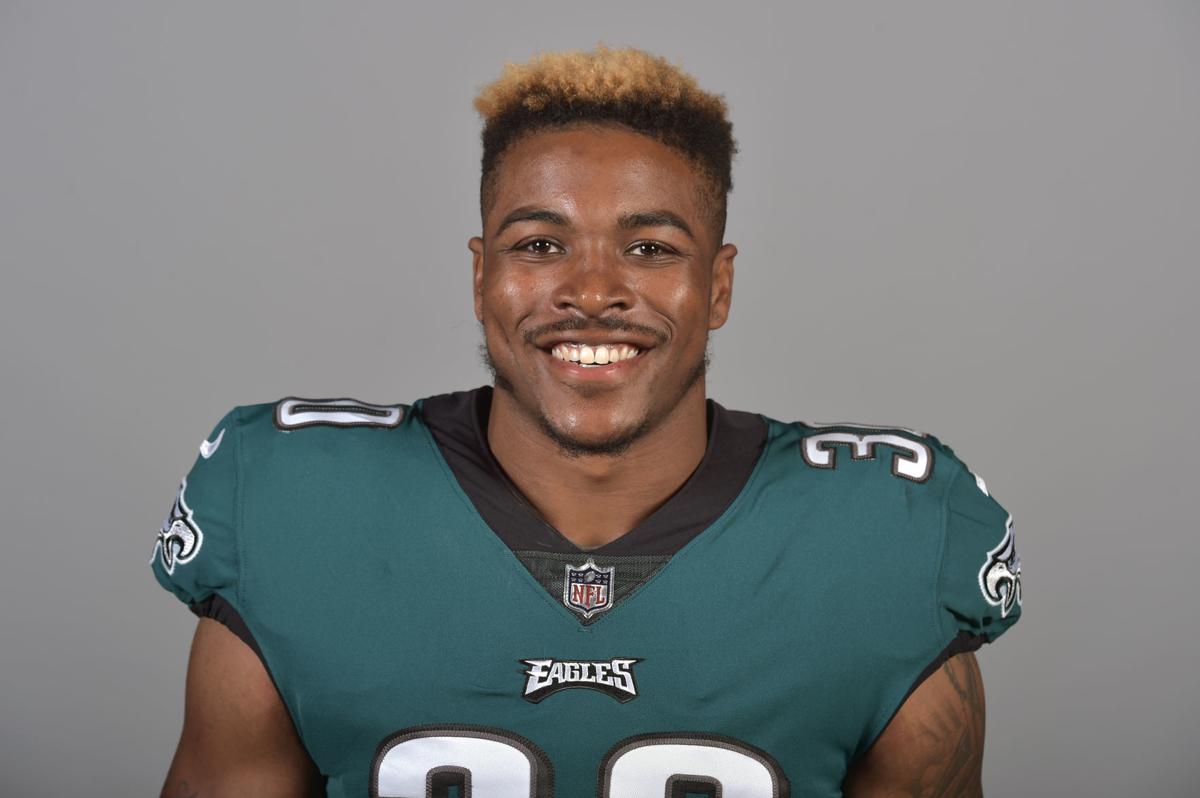 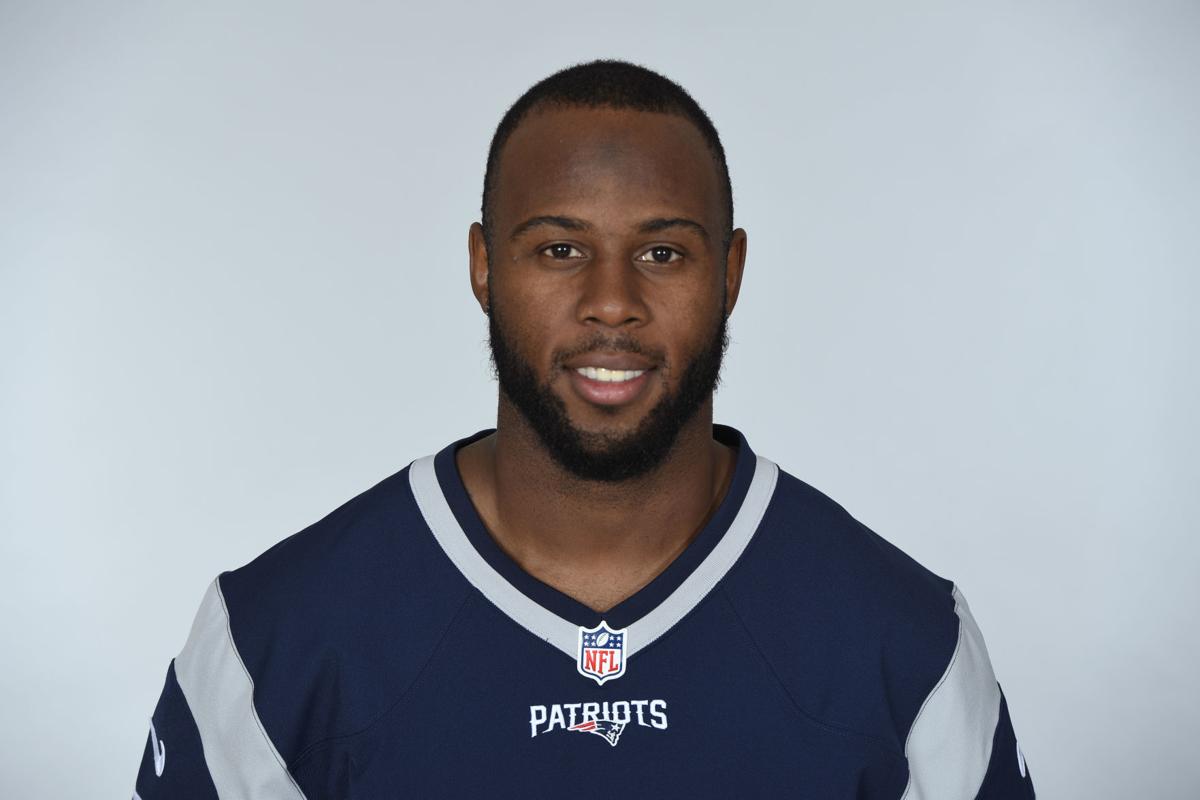