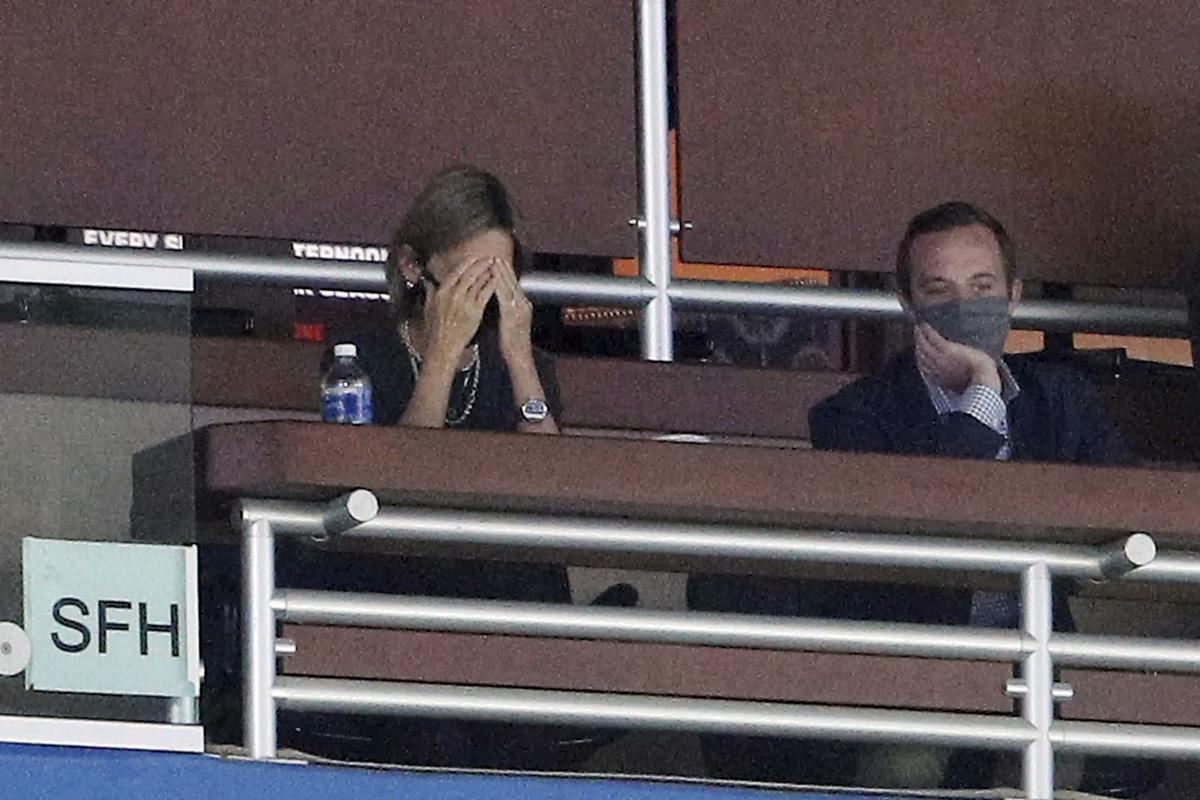 Detroit Lions owner Sheila Ford Hamp, left, reacts after an incomplete pass by the Lions in the fourth quarter of an NFL game against the Houston Texans at Ford Field in Detroit, Thursday, Nov. 26, 2020. (Mike Mulholland/The Grand Rapids Press via AP) 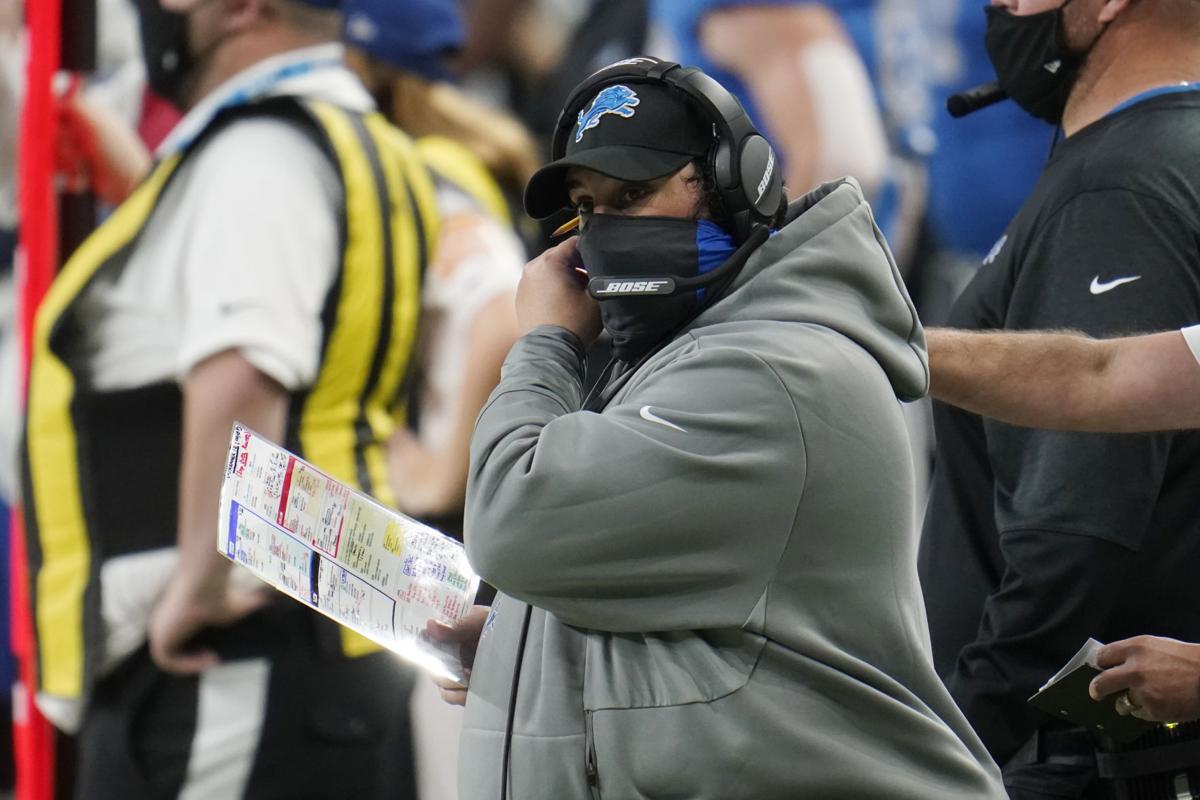 Detroit Lions head coach Matt Patricia adjusts his face mask during the second half of an NFL football game against the Houston Texans, Thursday, Nov. 26, 2020, in Detroit. (AP Photo/Paul Sancya)

Matt Patricia opened his final postgame news conference with the Detroit Lions by thanking his wife and children for their support.

Patricia probably knew what was coming.

His boss, general manager Bob Quinn, might not have expected the same fate.

The Lions fired Patricia and Quinn, who hired the coach to replace Jim Caldwell, and effectively ended the franchise’s attempt to replicate the success the men helped Bill Belichick achieve in New England.

The moves were made Saturday, surprising no one.

The duo joins a long list of general managers and coaches that failed to help the franchise win over the last several decades.

“We can’t hide our past, that’s for sure," said Hamp, who succeeded her mother in June to lead the franchise her late father bought in 1963. “But I’m very dedicated to turning this ship around and really making a difference."

Darrell Bevell, who has 14 seasons of experience as an offensive coordinator, will be the team’s interim coach for the final five games. The general manager’s duties will be handled on an interim basis by Kyle O’Brien, Lance Newmark, Rob Lohman and Mike Disner, all of whom worked for Quinn in the team’s front office.

This season, the Lions (4-7) lost consecutive games for the third time and it cost Quinn and Patricia their jobs. Detroit collapsed in a 41-25 loss to Houston at home on Thursday after getting shut out for the first time in 11 years in the previous game at Carolina.

“I’m just really appreciative of my family, my wife, my kids,” Patricia said Thursday before taking questions from reporters on a Zoom call. “My wife does a lot behind the scenes and from that standpoint I appreciate her a lot.”

The setbacks dropped Patricia to 13-29-1 in two-plus seasons and Quinn’s mark fell 12 games under .500 over five seasons. The most recent losses led to the end of their careers with the Lions.

“Ten days ago, we looked like we had a good chance to be playoff bound and both of those games were extremely disappointing," Hamp said. “Yes, we thought it was a good time to make a change."

Quinn, who was part of the Patriots’ personnel department for 16 years, was given his first shot to run an NFL front office in January 2016. He retained Caldwell and Detroit reached the playoffs but then fired him the next season after another 9-7 record wasn’t enough to earn a spot in the postseason.

When Quinn let Caldwell go with a 36-28 record over four seasons and an 0-2 mark in the playoffs, he said the move was made to find a coach to take the team to the next level.

Patricia did that, but it wasn’t the level he or Quinn needed to stay employed in the Motor City.

Detroit was 6-10 under Patricia in 2018, won just three games last season and was barely better this year.

Patricia was on Belichick’s staff for 14 seasons, including six years as defensive coordinator, before Quinn gave him his first shot to be a head coach at any level. Patricia was incessantly peppered with questions about his job being in jeopardy, dating to the 2019 season, and refused to engage in the conversation with reporters.

Hamp said nearly a year ago that Quinn and Patricia were retained with an expectation that the team contend for the playoffs in 2020.

“I meant what I said last December and I still mean it," Hamp said. “Things were not going well."

After loss to Packers, Lions embattled coach Matt Patricia backed by his players

With Green Bay's 42-21 win, Detroit is the first team ever to blow double-digit leads to lose four consecutive games, according to the Elias Sports Bureau.

No game this weekend resulted in no movement in the AP Top 25 poll for the University of Wisconsin football team.

The Badgers on Monday added another stud defensive recruit to a 2021 class loaded with them.

Cancellations and COVID-19 coronavirus issues across the Big Ten Conference make for a variety of scenarios for the title game scheduled for Dec. 19.

Badgers notebook: Off week a chance to regroup for stretch run of season

“It was definitely an odd week, but the guys handled it great, had a couple guys get back healthy and get their legs back under them," redshirt freshman quarterback Graham Mertz said of the Badgers' unexpected bye week.

Matthew Stafford is the best quarterback most Lions fans have rooted for in their lifetime, and it's possible now is not the absolute time to move on.

A look at what the Badgers' redshirt freshman QB can improve upon after a tough showing at Northwestern.

Jack Tuttle, who was a four-star recruit, received scholarship offers from Alabama, LSU, Southern Cal and Wisconsin, among others, chose Utah, then transferred to Indiana after one semester with the Utes.

Experience paying off for UW's front as it prepares for final stretch of Big Ten Conference season.

View from the other side: Indiana beat reporter previews game at Wisconsin

Zach Osterman of The Indianapolis Star gives his thoughts about the ranked matchup between the Hoosiers and the Badgers.

Having led the Lions to an improbable comeback victory at Chicago last Sunday, former Badgers QB and Packers assistant coach Darrell Bevell has been the toast of Detroit for the past week.

Detroit Lions interim coach Darrell Bevell is the NFL’s first head coach to miss a game because of COVID-19 protocols even though he has not tested positive for the coronavirus.

Detroit Lions owner Sheila Ford Hamp, left, reacts after an incomplete pass by the Lions in the fourth quarter of an NFL game against the Houston Texans at Ford Field in Detroit, Thursday, Nov. 26, 2020. (Mike Mulholland/The Grand Rapids Press via AP)

Detroit Lions head coach Matt Patricia adjusts his face mask during the second half of an NFL football game against the Houston Texans, Thursday, Nov. 26, 2020, in Detroit. (AP Photo/Paul Sancya)