That is all Kylin Hill wrote on his Twitter account on the night of Aug. 21, mere moments after walking off Lambeau Field and into the locker room. Just three characters, but the Green Bay Packers running back had made his point abundantly clear, with 277 to spare.

The Packers’ seventh-round draft pick had scored a touchdown for the second consecutive preseason week, a 12-yard scoring run against the New York Jets’ No. 1 defense that afternoon to pair with his 22-yard catch-and-run touchdown on a screen pass the week before against the Houston Texans.

He’d just passed the halfway point of training camp, but the competition for the No. 3 running back job in the Packers backfield, behind Aaron Jones and AJ Dillon, was basically over.

Not just because of those two plays, or because Hill would finish the preseason having put up 104 yards from scrimmage on 23 touches (19 carries for 64 yards, four receptions for 40 more), or because he will also be the team’s kickoff returner for the Sept. 12 regular-season opener against the New Orleans Saints in Jacksonville.

No, it had been his day-in, day-out improvement and flashes in practice separating himself from the competition (Patrick Taylor, who finished preseason play as the Packers’ leading rusher and was subsequently re-signed to the practice squad, and Dexter Williams, a 2019 sixth-round pick who wasn’t brought back), and the work ethic and willingness to learn that impressed coaches and quarterbacks alike.

“That’s my daily motivation,” Hill said. “Seventh-round pick, that’s just my daily grind, my motivation. When I’m tired, that’s what I think about, just to prove a lot of people wrong in my life.”

Hill has been doing that ever since last fall, when his senior season at Mississippi State ended prematurely.

After rushing for 734 yards as a sophomore in 2018 and 1,350 yards as a junior in 2019, Hill carried just 15 times for 58 yards in the Bulldogs’ first three games last season under new coach Mike Leach, and Leach suspended him for the Texas A&M game in October, reportedly after an outburst following the previous week’s game against Kentucky. After that, Hill opted out of the remainder of the season.

That caused the 5-foot-10, 214-pound Hill’s draft stock to drop, even though he ran his 40-yard dash in 4.55 seconds and he showed he could catch the ball out of the backfield (67 career receptions) as well — an important skill in the Packers’ offense.

“I think the biggest thing for him is his professional attitude or effort or the way he’s approaching the classroom and the practice field. He’s done a great job of being humble, being focused. Our running backs have a lot on their plate. We do a lot of different things, we line ‘em up in a bunch of different places. And that’s something we didn’t necessarily challenge him with at Mississippi State. He’s done a really nice job of trying to be a pro.”

What role Hill will fill on offense remains to be seen. Jones, coming off his first Pro Bowl selection and back-to-back 1,000-yard seasons, is one of the league’s top backs, but LaFleur has historically tried to manage Jones’ workload, using Jamaal Williams to spell him frequently over the past four seasons.

AJ Dillon, a second-round pick last year whose rookie season was derailed by contracting COVID-19, flashed his ability as a bruising runner in a late-season win over the Tennessee Titans last year and has moved into the No. 2 role with Williams departing for the Detroit Lions in free agency.

But just as Dillon had limited opportunities as the third back (97 regular-season snaps), past No. 3 backs also saw limited playing time, both under LaFleur and his predecessor, Mike McCarthy. In 2019, Jones and Jamaal Williams played 96.1% of the offensive snaps (Dexter Williams played just 10 snaps), while the No. 3 backs scarcely played under McCarthy in 2018 (Kapri Bibbs, 17 snaps), 2017 (Devante Mays, 17 snaps), 2016 (Christine Michael, 58 snaps) and 2015 (John Crockett, 16 snaps).

“It all comes down to different choices,” LaFleur said. “What do you choose? What do you want to do? And how are you going to get all these guys the ball? That’s something that we weigh every week and I think a lot of times it has a way of naturally kind of working itself out. But you’d rather have a lot of playmakers than no playmakers, so we’ll figure it out as we go.

“Kylin’s a really talented player. You guys can see that. He’s got really good explosiveness. He can stick his foot in the ground and make the cuts. Again, young player that continues to develop and improve every day. It’s just going to be how fast can we get him to be really consistent. The game certainly isn’t too big for him, so he’s a young guy we’re really excited about.”

Having grown as a player and person, could Packers’ Marquez Valdes-Scantling be in for a huge year?

"To go in with him is the only way it could be, to be honest," Charles Woodson said of Al Harris.

"I thought he did an excellent job," Brian Gutekunst said of Jordan Love. "(We) really saw the growth we needed to see in (him)."

Playing nearly every preseason snap at left tackle across the team’s three preseason games, Yosh Nijman was on the field for 157 of the offense’s 176 snaps (89.2%) and showed significant improvement.

10 reasons for optimism for Bears, from David Montgomery's emergence to questions for NFC North rivals

The Bears are coming off consecutive 8-8 seasons, reaching the playoffs as the seventh seed in the NFC a year ago, and there is a belief at Halas Hall that big things are ahead despite one of the toughest schedules in the league.

For Packers' Jack Heflin, going from tiny Prophetstown to roster spot in Titletown ‘the greatest day of my life’

New Packers punter Corey Bojorquez entered the NFL as an undrafted free agent with the New England Patriots in 2018.

Za’Darius Smith returns to practice — but will Packers’ star edge rusher be ready for Saints?

Za’Darius Smith has not spoken with reporters during training camp, so he has not addressed the nature of his back injury or how or when it occurred.

NFL 2021: While NFC is about Bucs and Packers, the AFC clearly is the deeper, more powerful conference

It's almost as if the NFL is emulating college football heading into the 2021 season, with the AFC as the professional version of the SEC and the NFC as Conference USA.

With ‘alpha’ Elgton Jenkins stepping in, Packers confident they can thrive without David Bakhtiari

“The moment’s never too big for him,” Packers coach Matt LaFleur says of Elgton Jenkins.

“Myself, my quarterback, I feel we have almost an identical mindset right now, and it really spreads across the team, because it’s something we talked about,” Davante Adams said. 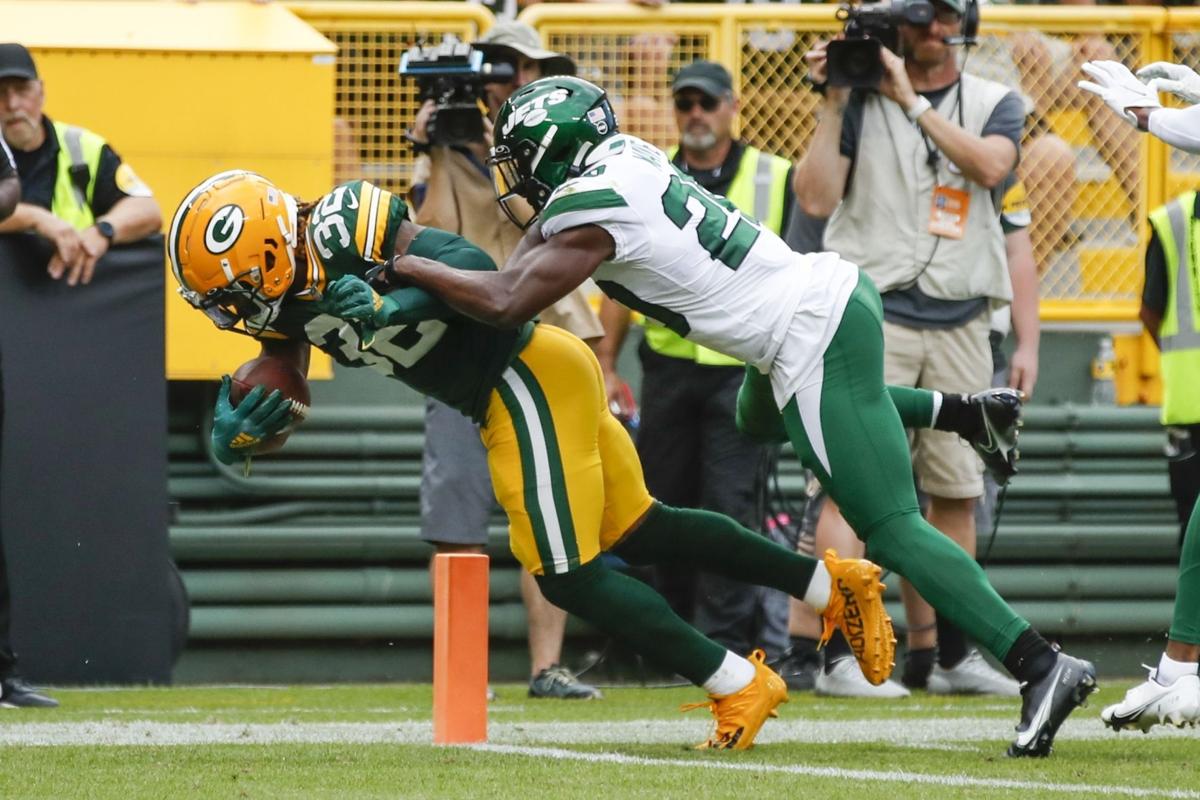 Packers' Kylin Hill falls into the end zone for a touchdown as Jets' Marcus Maye defends during the first half of a preseason game against the Jets last month. 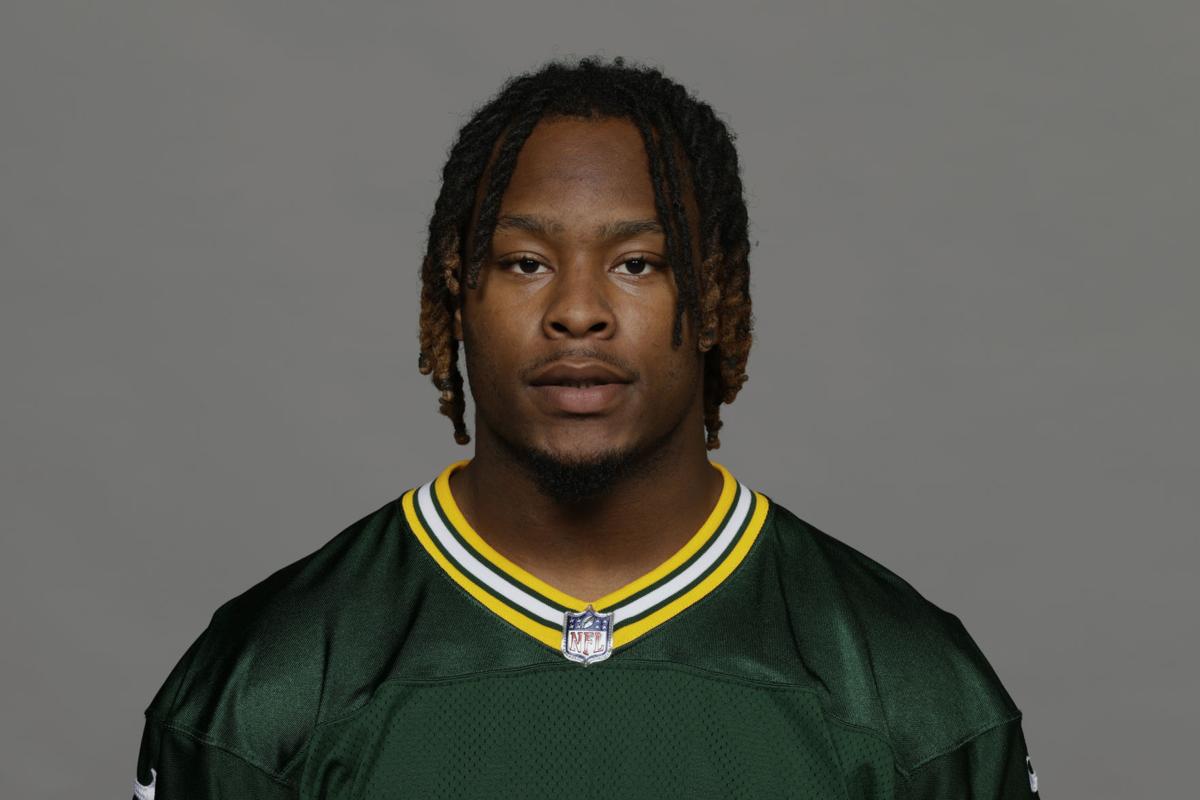