GREEN BAY — All the talk may be centered on how Matt LaFleur will connect with quarterback Aaron Rodgers, but the Green Bay Packers new head coach apparently made a very strong first impression on No. 1 wide receiver Davante Adams.

Adams, speaking to Green Bay NBC affiliate WGBA-TV after the NFC’s practice Wednesday at the Pro Bowl in Orlando, Fla., had nothing but good things to say about LaFleur, whom he said he met during a recent visit to Lambeau Field in advance of Sunday’s Pro Bowl game.

Most of the players have yet to meet LaFleur since his hiring came after the players cleaned out their lockers and went their separate ways after the season-ending loss to the Detroit Lions.

“I met him when I went up for my physical just a few days (ago). Got to meet him, and he’s a great guy,” Adams told NBC26’s Kelly Price. “I like what he’s trying to do with the offense. It’s pretty innovative, so it’ll be a good way to mix things up a little bit.”

Adams said that when the news broke of LaFleur’s hiring on Jan. 7, he learned from a friend and immediately started doing research on his new coach. A second-round pick in 2014, Adams has only played for Mike McCarthy, who was fired on Dec. 2 with four games left in the season, and interim head coach Joe Philbin, who had been McCarthy’s offensive coordinator.

“One of my buddies told me (the Packers had hired LaFleur), and I got on and I looked (him up), because I didn’t really know much about him,” Adams said. “I knew he was with the Titans (previously), so I looked him up and did a little bit of my own homework, I guess you could say. And then I met up with him, and he was great. Great first impression.”

Speaking in an interview with ESPN Wisconsin last week, LaFleur said he’d spoken to Rodgers “multiple” times but that he’d only spoken to a handful of other players at that point — including All-Pro left tackle David Bakhtiari and veteran defensive lineman Mike Daniels. But, LaFleur emphasized, connecting with players was a priority once his full coaching staff is set. LaFleur still has a few openings to fill on the staff.

“(I’m) just trying to nail down our staff, as well as trying to reach out to everybody in this organization, including the players,” LaFleur said. “Ultimately, they’re the most important ones.”

Asked what else struck him about LaFleur, the 26-year-old Adams pointed to the 39-year-old LaFleur’s youth. McCarthy is 55 and had been in his 13th season as head coach.

“He’s a real young guy. It’s a big change-up from Mike’s style, obviously, just off age alone,” Adams said. “(He seems) really relatable, which is going to be really good. To be able to lead men, you’ve got to be able to entertain them and capture their attention and gain their respect. He’s a guy that I see we can definitely move in that direction with.”

Meanwhile, Adams expressed excitement that former wide receivers coach Luke Getsy, who was with the team from 2014 through 2017, is set to return as quarterbacks coach. Getsy, who spent two years as an offensive quality control assistant before being elevated to wide receivers coach in 2016, left after last season to become the offensive coordinator at Mississippi State.

Even though Getsy will be Rodgers’ position coach now, Adams said he’s still happy about the news.

“As long as he’s back. I love that guy,” Adams said. “So as long as he’s back, it doesn’t really matter what room he’s in. Because I’ll steal some of that coaching and be around him a little bit. So I’m happy for him.”

For Robert Griffin III, there’s no doubt: ‘The Packers got a great one’ in Matt LaFleur

LaFleur was a part of Griffin's most successful NFL seasons when he helped coach the quarterback in Washington.

Packers once again will stay stateside for entire 2019 season

The Packers are the last remaining franchise in the 32-team NFL not to have gotten the call to go to London.

Perhaps the most important thing the Packers' new coach must do in his first season is convince Rodgers how much a productive running game could help him.

Not only do the Packers have a pair of under-40 coaches in charge of their offense — the 39-year-old Matt LaFleur and 39-year-old offensive coordinator Nathaniel Hackett — but the team is expected to hire 35-year-old Adam Stenavich to coach the offensive line.

After ‘multiple’ conversations with Aaron Rodgers, Matt LaFleur knows ‘partnership’ will be vital

As an offensive-minded head coach and the play-caller, LaFleur knows getting on the same page with Rodgers quickly and building a strong relationship with him is crucial.

Despite him being a ‘pain in the butt’ when they were young, Matt LaFleur wanted brother Mike on Packers staff

Matt LaFleur’s first staff is beginning to take shape, but the Green Bay Packers’ new head coach still has plenty of work to do before it’s complete.

Hackett spent most of the last four seasons with the Jaguars as quarterbacks coach (2015-16) and then as offensive coordinator before he was fired in November after Jacksonville lost its seventh consecutive game.

After 15 years on the Packers’ staff, Campen was not retained by new coach Matt LaFleur. Campen has since joined the Browns as Cleveland's associate head coach/offensive line coach.

Hackett spent most of the past four seasons with the Jaguars under coach Doug Marrone, serving as quarterbacks coach in 2015 before moving up to offensive coordinator in 2016.

Since Matt LaFleur’s hiring as coach, the team’s three longest-tenured assistants — James Campen, Joe Whitt and Joe Philbin — have either been dismissed or given the OK to seek jobs elsewhere.

Meanwhile, LaFleur confirmed ex-Jacksonville Jaguars offensive coordinator Nathaniel Hackett is in the running to be the team’s new offensive coordinator. Hackett is the son of former University of Pittsburgh and USC head coach Paul Hackett, who mentored ex-Packers coach Mike McCarthy early in McCarthy’s coaching career at Pitt and with the Kansas City Chiefs.

"I know he's a smart guy, and we'll just have to see how he approaches his new job," the defensive lineman said. "It's going to be exciting to get a new, fresh voice in here, no matter if he's offensive- or defensive-minded."

For new coach Matt LaFleur, connecting with Aaron Rodgers will be ‘how we’re going to build this thing’

More than anything else, LaFleur’s success or failure as the 15th coach in the Packers’ storied 100-year history will be decided by just how well his two-time NFL MVP plays after a down year.

Tom Oates: New Packers coach Matt LaFleur must get Aaron Rodgers to buy into his program

From all accounts, Matt LaFleur has the smarts, personality and coaching background to get that done.

An NFL source confirmed multiple reports that LaFleur intends to keep Pettine, who just completed his first year as the Packers’ defensive coordinator.

The Packers are hoping their decision to hire LaFleur as the franchise’s 15th head coach — a call they made Monday, when they offered him the job and began finalizing a contract — will be just what the team needs to get back to competing for Super Bowls.

And in Hendrickson, a former Pecatonica High School athlete who has known and been friends with Gutekunst since their time together at UW-La Crosse, Gutekunst now has a right-hand man who’s known him for more than two decades.

Smith will oversee the outside linebackers, a job he held with the Chiefs this season.

Not so special: Matt LaFleur’s new-look Packers must improve special teams — no matter who runs them

The team struggled in that area for almost all of former coach Mike McCarthy's 13-year reign.

Packers reportedly plan to bring Jimmy Graham back for another season

Graham signed a three-year, $30 million deal in free agency last March but didn’t have the impact he envisioned, finishing the season with 55 receptions for 636 yards (11.6-yard average) and just two touchdowns.

Mennenga worked for Packers defensive coordinator Mike Pettine in Cleveland, where Pettine was the Browns’ head coach in 2014 and '15 and Mennenga was the assistant special teams coach.

For Julius Peppers, Green Bay ‘felt like home,’ even as Carolina was truly home

Peppers not only was productive in Green Bay, but he quickly became a team leader, despite saying upon his arrival that he wanted to proceed carefully because he was the “new guy” in the locker room.

“Instead of getting surgery post-season, (I) decided to kind of go through a different routine with my knee than I’ve done in the past,” Rodgers said. “And I’m feeling really, really good.”

With staff nearing completion, new Packers coach Matt LaFleur gets ready to get to work

With the team expected to introduce a completed staff sometime in the not-too-distant future, what the group lacks in experience it should make up for in youthful enthusiasm. 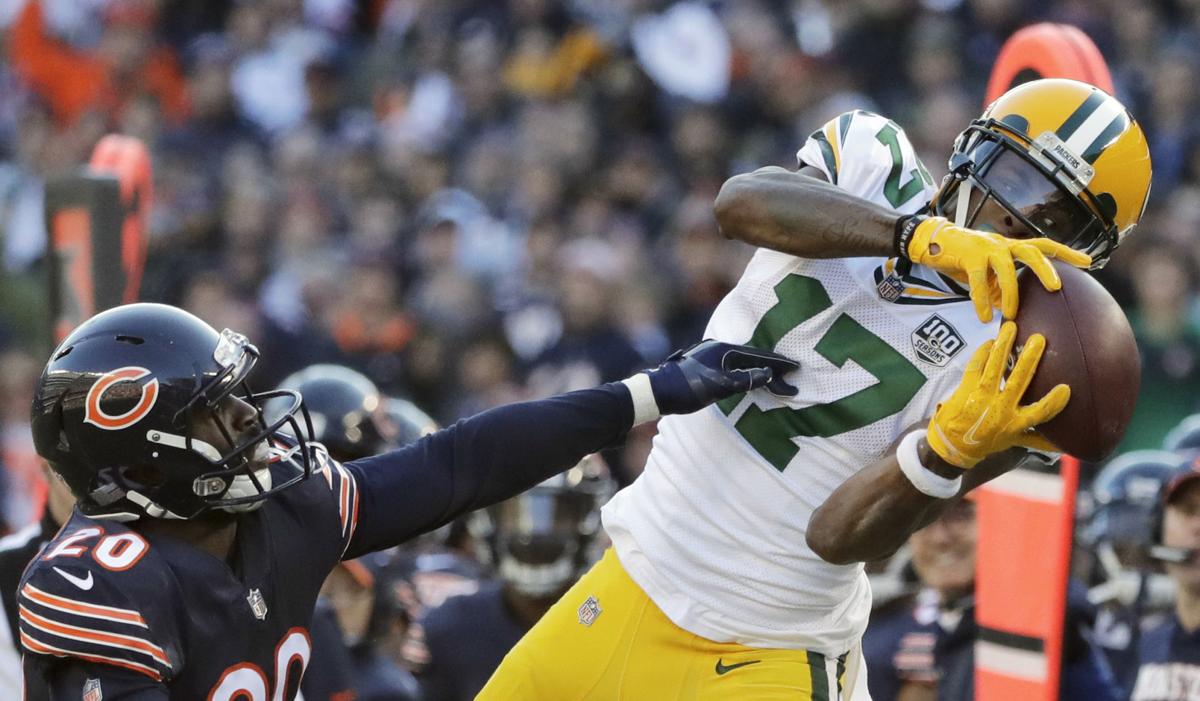 Green Bay wide receiver Davante Adams makes a catch against Chicago cornerback Prince Amukamara during the second half of the Packers' 24-17 loss to the Bears Dec. 16 in Chicago. 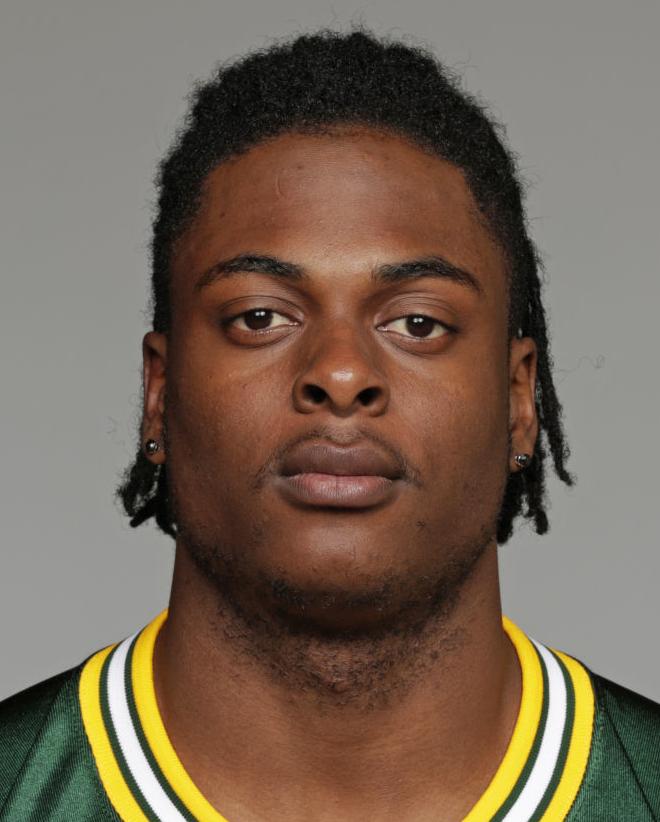