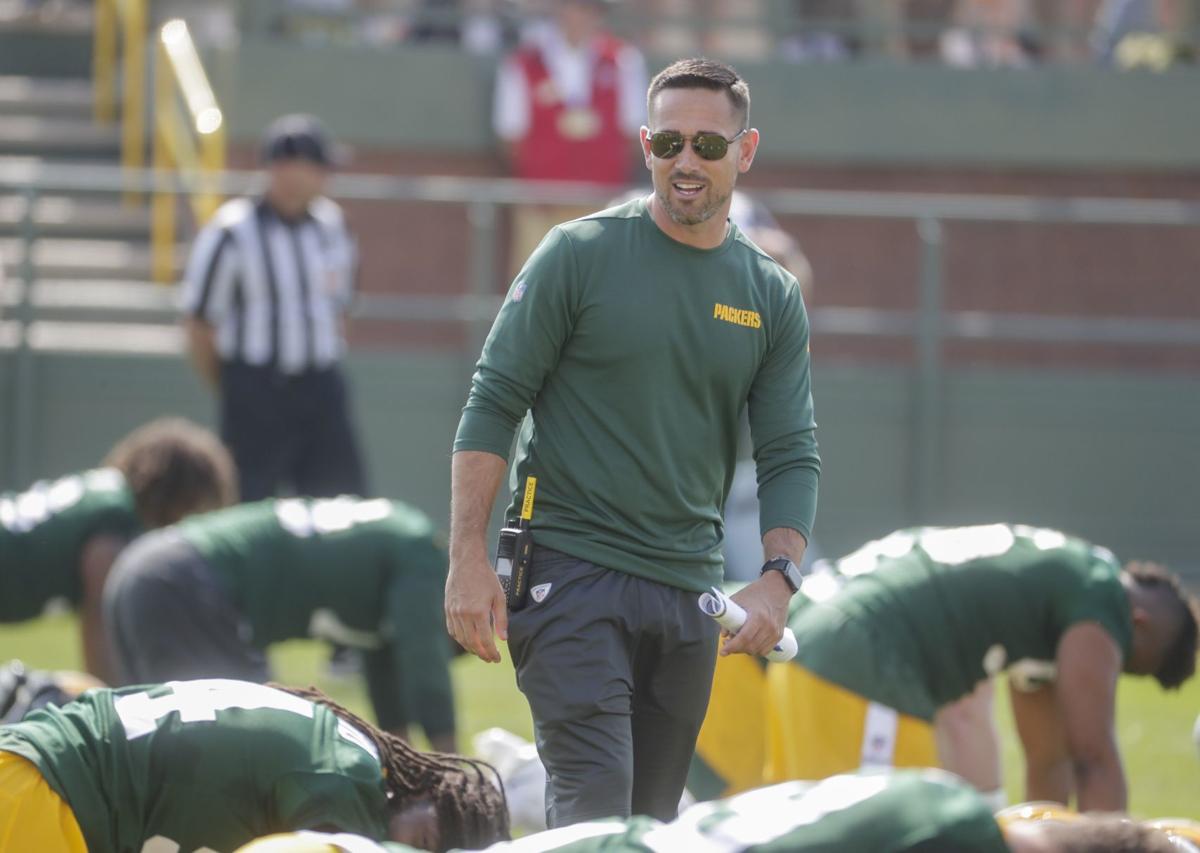 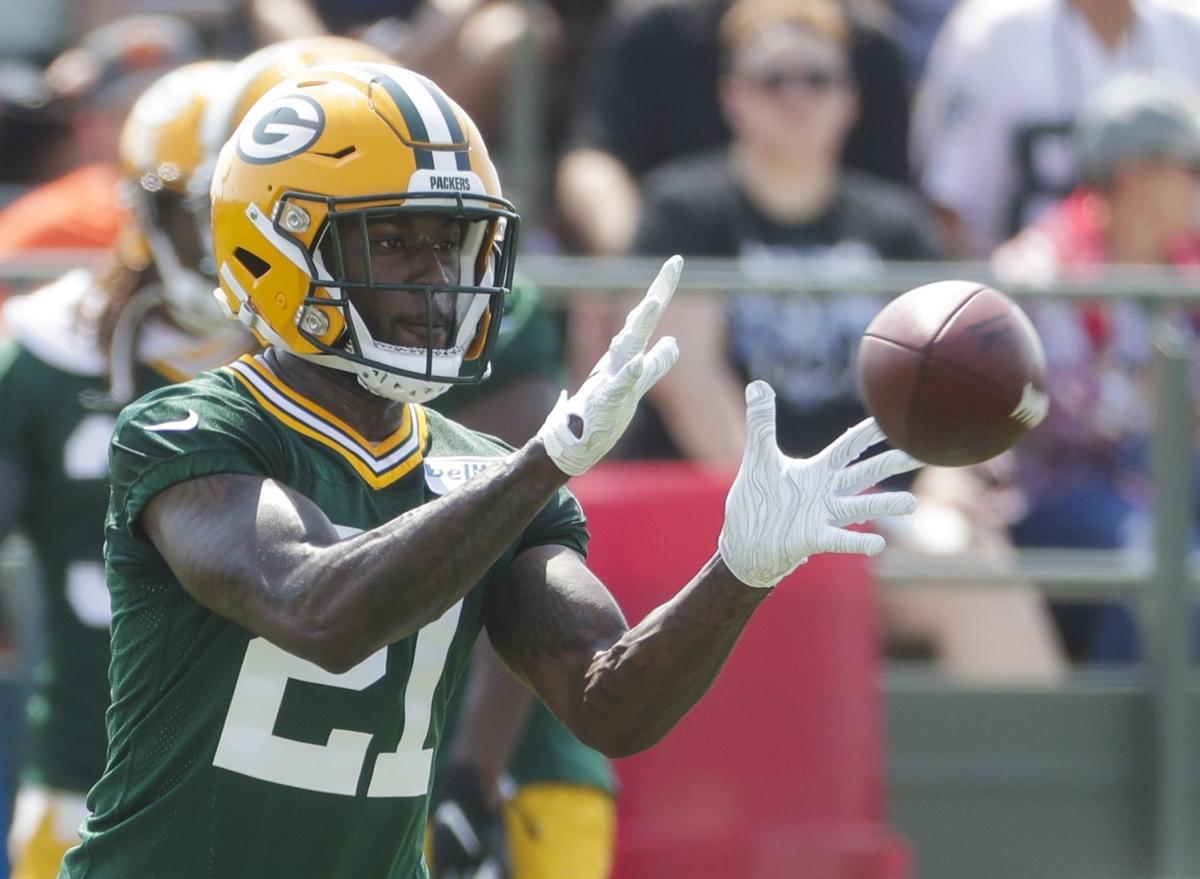 GREEN BAY — Practice was over — or so it seemed.

It was 12:17 Thursday afternoon when Matt LaFleur called his full Green Bay Packers team up — the kind of huddle that normally marks the end of the session. Even the Packers scouting staff, who’d been watching from the sideline, thought it was over and headed toward the Ray Nitschke Field exit.

Then, he set the ground rules: Nine plays, third-and-goal from the 8-yard line. Each play, one winner — either the offense, by scoring a touchdown, or the defense, by getting a stop. Then LaFleur had his staff turn the music, which had been blaring throughout practice, up even louder.

“Basically, he told us, ‘Hey, this training camp, at the end of every practice, we’re going to have a competitive drill — get the juices flowing, get us in that game-like atmosphere,’” recounted inside linebacker Blake Martinez, who delivered the period’s first big play by intercepting an Aaron Rodgers pass at the goal line. “It was a cool situation. They tallied up how many the offense won and how many the defense won. I think the defense ended up winning.”

Said LaFleur: “You either win or you lose. We had nine cracks at it. I thought it amped up the energy a little bit. It was encouraging.”

The session was about more than the outcome, though. It was about LaFleur, in his first training-camp practice as the team’s head coach, putting his stamp on the new operation.

Sure, he’d been on the job since his January hiring and presided over minicamp and organized team activity practices throughout the spring. But the first day of camp marks the unofficial kickoff of the 2019 season, and the feel was decidedly different than past years.

“There’s a different vibe here. Not saying the old vibe was bad or anything, but I think the vibe right now is fun,” Martinez said. “It’s exciting to be here; there’s something new every day. Whether we’re doing competitions, random things at the end of practice like we did today, or the music. It’s just different.”

While the structure of practice wasn’t vastly different — “I think it was similar,” wide receiver Davante Adams said — LaFleur also continued dividing up the team at times so the third- and fourth-stringers could work 11-on-11 drills at one end of the field while the starters and second units could do the same at the other end. And, of course, Rodgers and the offense continued the installation process of LaFleur’s scheme.

“There’s a lot of new stuff. Some of the drill work is a lot different. Some of the procedural stuff that we do (is different),” Rodgers said. “We’re splitting up at times, with one group on one side in team drills and the other group down at the other end, which really gives a lot of reps out to the younger guys.”

As LaFleur pointed out during his camp-opening news conference on Wednesday, this marks the third straight year that he’s been part of a first-year coaching staff with a rookie head coach. In 2017, he was the offensive coordinator for new Los Angeles Rams head coach Sean McVay. Last year, he was the offensive coordinator and play-caller for new Tennessee Titans head coach Mike Vrabel. Now, he’s in the first year of his first NFL head-coaching job.

“That did afford me a really unique experience, especially two years in a row and really three out of the last four years being with first-time head coaches,” said LaFleur, who was also the quarterbacks coach for new Atlanta Falcons head coach Dan Quinn in 2015. “Hopefully I’ve been through enough experiences with those other guys that nothing will catch you for a surprise. But this is the National Football League, and I know that you can’t take anything for granted.”

The unexpected could be lurking around the corner during any of the 15 remaining camp practices, but for LaFleur, other than having a throng of fans watching practice in the bleachers, the practice wasn’t vastly different than what he had his team do during OTAs and minicamp. He was less than thrilled with the players’ drill-to-drill tempo, but allowed that such issues are to be expected on the first day of camp.

“There’s always a transition, right?” LaFleur said. “As people learn how you operate, Day 1 it’s always a little bit slower than we’re going to be (going forward). I think you’ll notice a difference. And I think we need to crank that music up a little louder. So bring some earplugs.”

With the $7.6 million base salary and $10.7 million salary-cap charge Daniels was set to carry in 2019, the Packers decided moving on from him made both sense and cents.

With new extension and expanded role, Dean Lowry becomes one of the ‘pillars’ of Packers' defense

Lowry had a career-high 57 tackles last season while recording seven tackles for loss and three sacks.

Tom Oates: Compromise has been good so far for Packers' Aaron Rodgers and Matt LaFleur

LaFleur and Rodgers are trying hard to maintain the integrity of the offense while giving Rodgers some of the latitude he likes at the line of scrimmage.

Set to carry a $10.7 million salary-cap number, Daniels became expendable in part because the Packers want to sign defensive tackle Kenny Clark to a lucrative extension.

GREEN BAY — Well, so much for that, Aaron Rodgers.

‘Hey, aren’t you …’: Olive Sagapolu aims to make a name for himself with Packers beyond beach backflip

GREEN BAY — When Olive Sagapolu arrived at Ray Nitschke Field for practice Friday morning, he was met by a handful of quizzical looks. He look…

No. 4 quarterback Manny Wilkins makes the most of his opportunity with the Packers – and earns a chance for more

Matt LaFleur had the distinct displeasure of playing the game “Where’s Za’Darius?” last season. Now, the Packers’ first-year head coach wants to make sure opposing offenses go through what he endured.

Through four practices, Greene has been giving the first-team defense what it wants at safety while first-round pick Savage recovers from having his wisdom teeth pulled shortly before camp began.