GREEN BAY — David Bakhtiari is not a doctor, nor does he play one in the Lambeau Field media auditorium, where he was holding court on Tuesday afternoon and discussing his comeback.

The Green Bay Packers franchise left tackle, who tore the ACL in his left knee during a Dec. 31 practice, can’t say whether he’ll be medically cleared in time for the team’s Sept. 12 regular-season opener at New Orleans.

But while stuck on the physically unable to perform list — relegating him to practice observer and advice dispenser rather than participant during training camp so far — he has been listening closely enough to the medical experts that he could probably make a convincing faux doc on “Grey’s Anatomy” or “General Hospital” at some point.

“Physically, from a strength standpoint, you have atrophy to your leg from the moment of surgery,” the five-time All-Pro explained, beaming with pride while doing his best impression of team orthopedist Dr. Pat McKenzie. “Turning on certain muscles after a long time, you lose a lot of muscle mass — atrophy to the calf, the hamstring, all the other (muscles). There’s four quad (muscles) — that’s why they call it the quadriceps.

“All that has to do with stability. And then beyond that you have the graft (to repair the ACL). The graft needs to take and get blood flow and strengthen, and it goes through kind of a bell curve of a life span, and that’s where you get your date of where doctors feel comfortable. I think there’s a fine line between the two.

“We’re going to have open communication the entire way, see how I feel and once we all feel comfortable with where I’m at and when I can go out there and play — not just football, but the brand of football I know and everyone else does — I think that’s where we’ll be in a good spot.”

Bakhtiari said he feels “good” now, but he said he’s not “going to set any dates or expectations” for his return. While his time on the sideline has reminded him how much he loves the game (“I’m really itching to get back out there”), it sounds as if he’s more likely to start the season there than in the starting lineup.

In fact, coach Matt LaFleur said the Packers are preparing for the worst — that Bakhtiari won’t be ready for the opener — and will be happily surprised if that’s not the case.

“I think that’s the mindset. Until we know and have a better indication of when he’s going to be back here, I think that’s the way you have to prepare,” LaFleur said Tuesday. “Eventually, he will be out there, and that will give us a big boost.”

Asked if he’s concerned that he’ll start the year on the PUP list, meaning he’d be out for at least the first six weeks, Bakhtiari replied: “We’ll address that fork in the road once we get there. Right now, I wake up every morning, get in here at the crack of dawn and make sure I attack everything — from the rest and recovery, to the rehab, to the strength and conditioning side, to see where I’m at.

“And then when that fork on the road hits, we’ll see where I’m at physically. And that’s going to kind of dictate where I’m going to be.”

In the meantime, Bakhtiari has put his sideline time to good use by helping third-year lineman Elgton Jenkins with the intricacies of the position. Jenkins, who made his first Pro Bowl last season, is a left guard by trade but played all across the offensive line last season.

“You guys know David. He’s not short on words — ever,” LaFleur said. “He loves to have fun around here, which is great, especially training camp can get a bit mundane at times. Obviously I think his play speaks for itself, but he does a great job of helping the young guys along the way.”

Although Bakhtiari spends most of practice doing his rehabilitation work inside the Don Hutson Center — ”I’m in (there) just sipping a martini and relaxing for the first hour and a half, and then I come out and pour some water on me so it looks like I did something,” he joked — he does spend time with Jenkins and other linemen throughout the day and sits directly behind Jenkins in the offensive line room to impart his knowledge.

“I sit right in front of him in meetings, so he always is in my ear just telling me things, helping me out with the small details,” Jenkins said. “His experience is way, way, way above mine, so he helps me out a lot.”

For his part, Bakhtiari admitted the rehab process has been a trial-and-error experience because he’d never sustained such a serious injury before. While he wants to push himself in hopes of accelerating his timeline, he’s mindful of the dangers of going too far.

“It’s a fine line. That’s what I’ve figured out,” Bakhtiari said. “This is definitely my biggest injury. There are certain days where you can’t really do too much. I think the best rehab is the one that adjusts constantly on the fly, (based on) how much your body can tolerate, because you want to basically toe the line without crossing it. Once you do, you kind of set yourself back and you don’t want to be in that position.

“I’ve been pleased. I haven’t had any hiccups, so that’s nice.”

After being badgered by All-Pro cornerback Jaire Alexander about not bringing enough snacks to the Packers defensive backs room, rookie first-round pick Eric Stokes went to Target on Sunday and loaded up for a junk food-a-palooza — buying so many candy bars, cookies and chips the red-shirted checker was taken aback. “He was like, ‘Oh, man, this is a lot of junk food for just one person,’” Stokes said. “I was like, ‘Trust me, it’s about 16, 17 of us. It’s going to be gone in about a week.’” … Rookie defensive tackle T.J. Slaton ended practice by batting and then intercepting a Jordan Love pass and returning it for a touchdown during the final 2-minute 11-on-11 period. It was an eye-popping play by Slaton, but according to veteran defensive end Dean Lowry, it might’ve been the kid’s second-most athletic play of the day. “In the defensive meeting, he was dunking (on the 10-foot basketball hoop) in flip-flops in our team meeting room,” Lowry said. “And he brought it into practice.” … Love continues to get bonus 11-on-11 periods with the starting offense as Aaron Rodgers remains on a pitch count. Love also needs to get ready for extensive playing time in preseason, LaFleur said. “So you kind of get the benefit of both: You’re keeping your starter fresh but still preparing the young guy and getting him into the mix with the ones,” LaFleur said. “Jordan’s going to get a ton of reps in the preseason, game reps which are invaluable, so we want to make sure he’s feeling comfortable with all those guys.” … For the second time in less than a week, the Packers had a promising young player abruptly retire. First, it was offensive lineman Simon Stepaniak. On Tuesday, it was wide receiver Bailey Gaither, an undrafted wide receiver from San Jose State, who was put on the reserve/retired list. Former Northern Illinois tight end Daniel Crawford took his spot on the roster. … Sports Illustrated reported the Packers are adding defensive lineman Josh Avery after a tryout.

For Packers lineman Billy Turner, being ready for anything — and any position — is the name of the game

“I learned a long time ago that I cannot approach any season with expectations of playing any position,” Turner says.

Matt LaFleur so admires and appreciates Lewis — and has cited his leadership and professionalism so frequently — that his assistant coaches, during LaFleur’s first season as head coach in 2019, gave him an authentic Lewis No. 89 jersey.

“It feels good to have the boys back together,” tight end Robert Tonyan said. “Even just chilling in the locker room or in the cafeteria, I just think everyone's just glad to kind of just be back to normal and have football again."

If the wide receiver can find consistency, it could mean a big payday in free agency.

No offseason, no problems? So far in camp, Aaron Rodgers ‘just in total command out there’

The 37-year-old has shown no signs of rust after skipping the entire offseason program, including the mandatory minicamp in June.

Remembering own tribulations, Packers' Aaron Rodgers’ focus with Jordan Love is ‘putting myself in his shoes’

“There’s a love and an appreciation and a friendship there, just like it was with me and Brett (Favre). So, I wanted to make sure I checked in with him and let him know I was thinking about him," Rodgers said. "That was important for me — and it’s not going to change."

‘I had to convince myself that I was going to be the starter,‘ Packers QB Jordan Love says

That was the second-year player's approach to the Aaron Rodgers offseason saga.

Could ‘lights out’ De’Vondre Campbell solve what has ailed Packers at inside linebacker?

So far in camp, Campbell and second-year man Krys Barnes have lined up with the No. 1 unit when in the base defense. 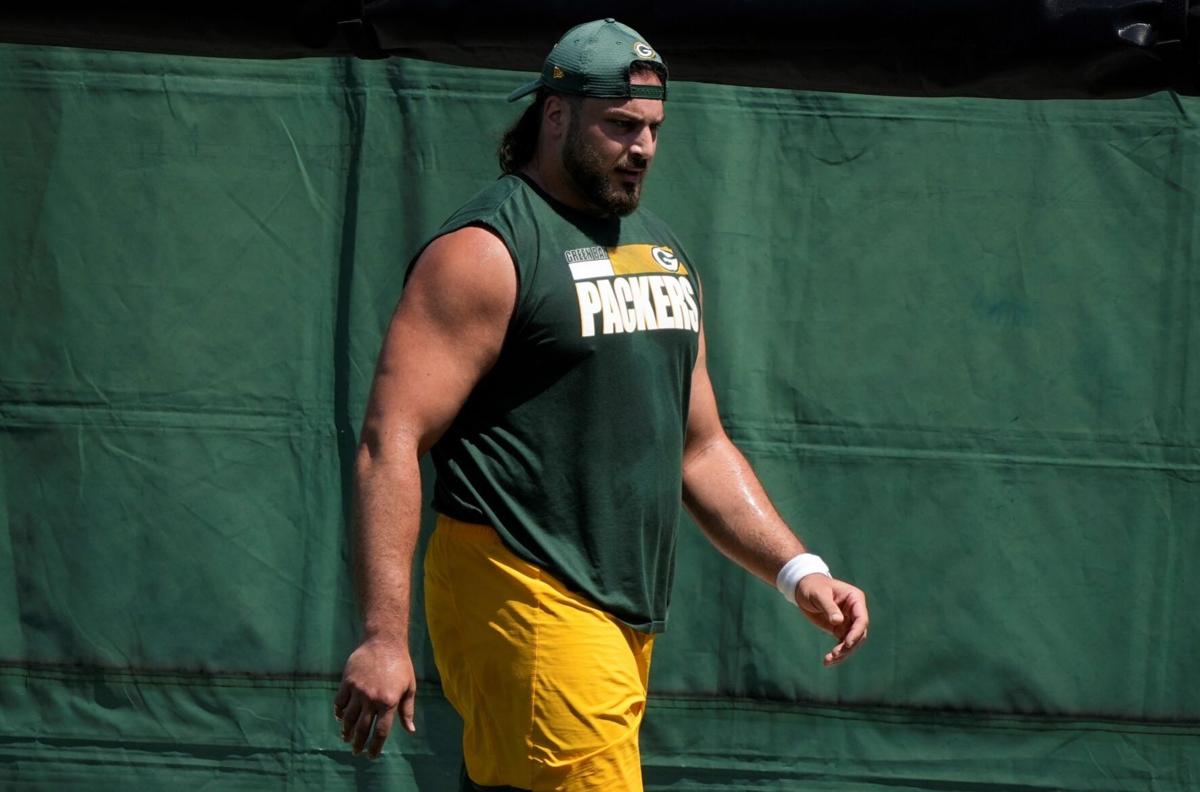 Packers' David Bakhtiari runs a drill during minicamp on June 8 in Green Bay. 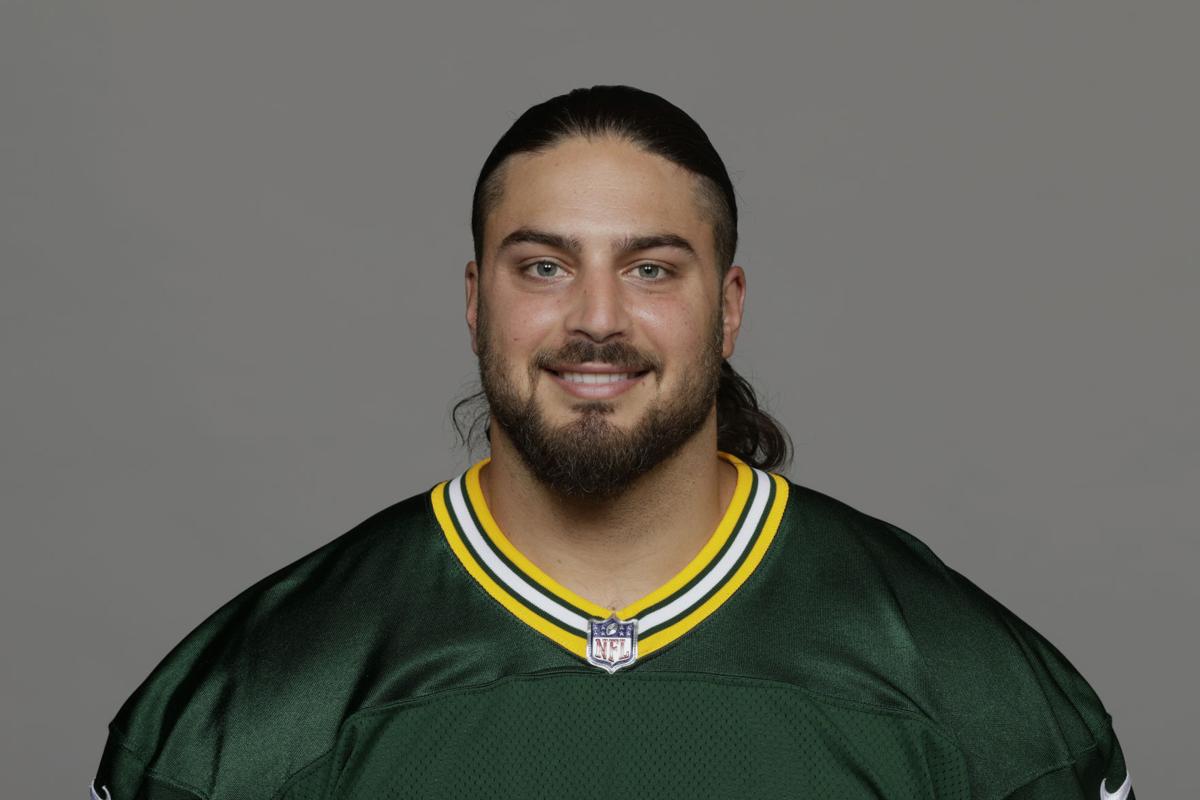