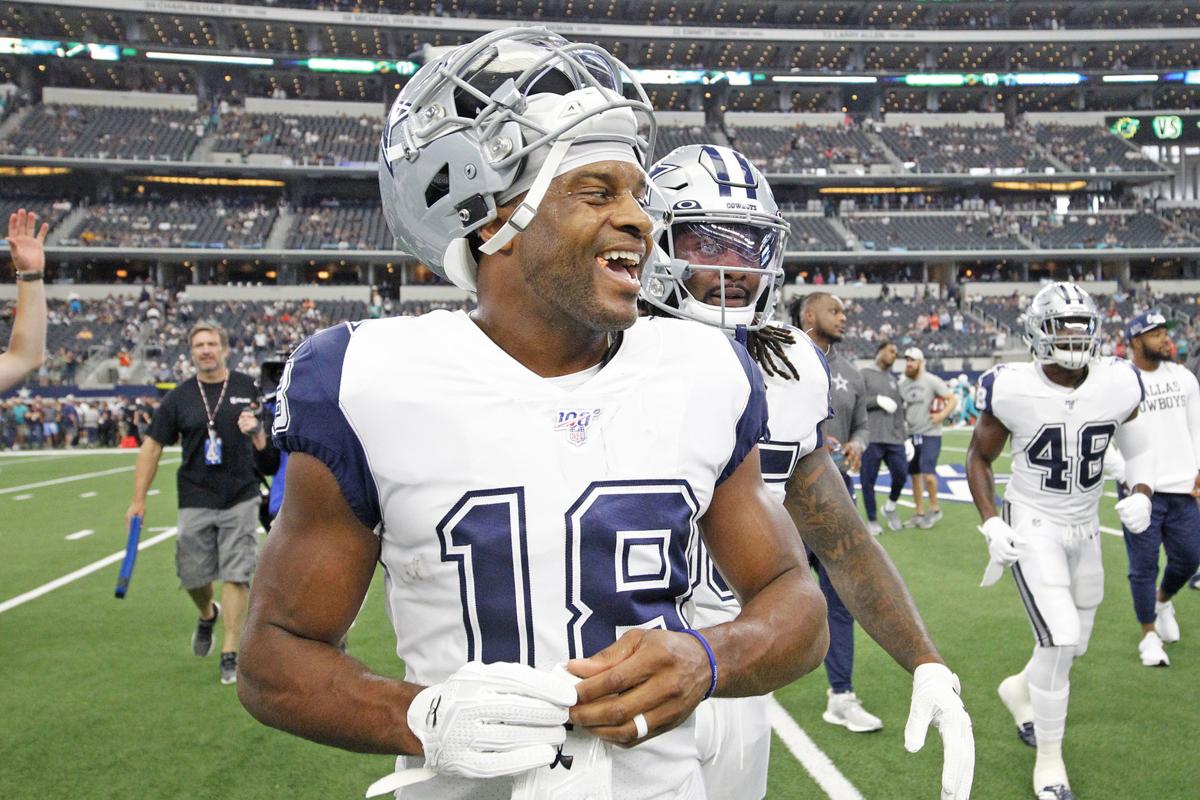 Randall Cobb made the Pro Bowl once (2014) in his tenure with the Packers, who selected him in the second round of the 2011 draft. 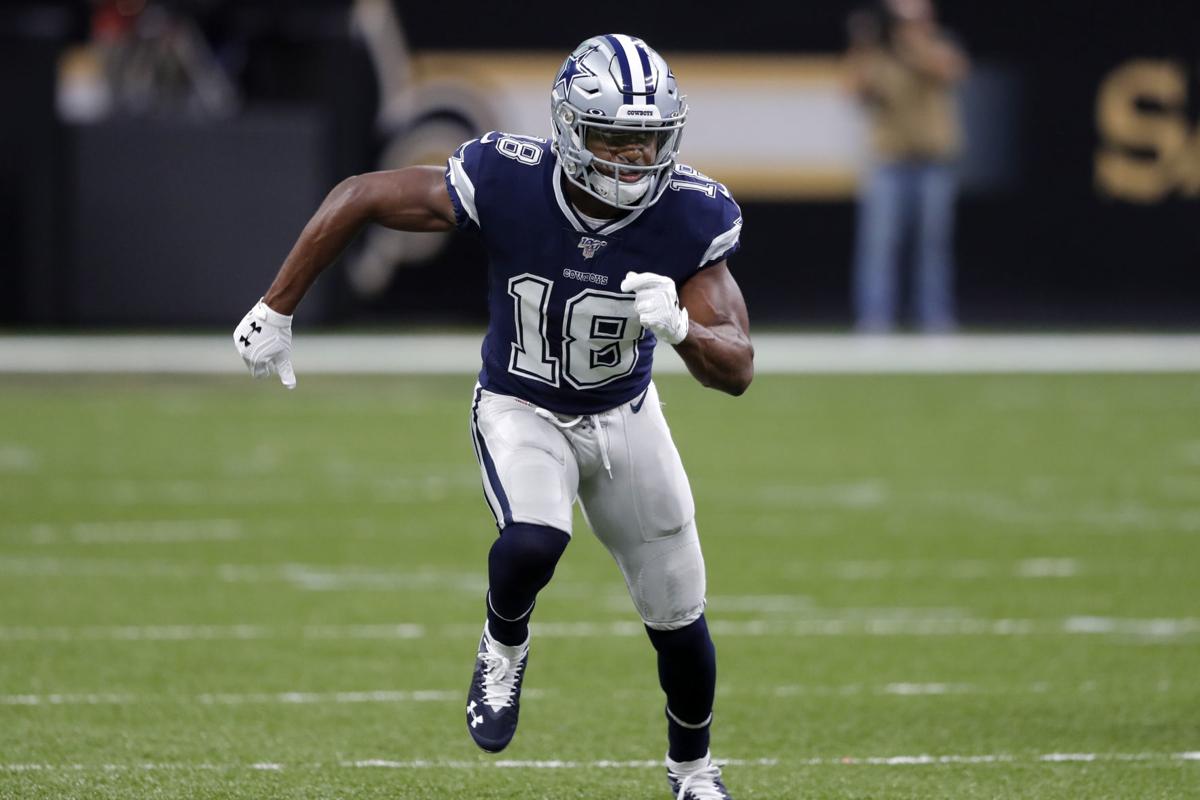 Randall Cobb has 14 receptions for 157 yards (11.2 average) and a touchdown in four games for the Cowboys this season.

GREEN BAY — The last time Aaron Rodgers and Randall Cobb were on the same football field, they both had tears in their eyes. Yes, on rare occasions, there is crying in football.

It was before the Green Bay Packers’ season finale last December, as pregame warmups were coming to an end and the stark reality was starting to hit them both:

Aaron Rodgers goes with an unforgettable line from The Shawshank Redemption in his farewell Instagram post to his friend and now ex-#Packers teammate Randall Cobb. pic.twitter.com/l446pkm9Hs

As it turned out, of course, it was: Cobb departed in free agency in March, signing a one-year, $5 million deal with the Dallas Cowboys without so much as an offer from the Packers. In a farewell post on Instagram after the news broke, Rodgers used the photo along with a quote from the movie “The Shawshank Redemption.”

“I mean, I knew that it was a very good chance that it could be (over). That’s a part of the business. Nothing’s ever guaranteed,” Cobb said when asked about the iconic picture, which was taken by team photographer Evan Siegle. “Obviously that was the last year of my contract, the last game, and we had no idea what was going to happen following that game and in free agency and how it was going to play out.

“There was definitely a lot of emotion in that moment. I’d been fortunate to play for that organization for eight years, and have some great memories and some great moments in that stadium. And obviously, it all came out in that one moment.”

When the Packers quarterback and the Packers-turned-Cowboys wide receiver see each other again on Sunday at AT&T Stadium in Arlington, Texas, when Rodgers’ 3-1 Packers and Cobb’s 3-1 Cowboys square off, they’ll likely keep their emotions in check. But that — and the fact that they spend a lot of time together in the offseason — doesn’t mean they don’t miss being teammates.

Rodgers went through the same process a year earlier with another of his closest friends and pass catchers, Jordy Nelson, after the Packers cut Nelson and he landed with the Oakland Raiders. The Packers played at Oakland in preseason last year and Rodgers, Nelson, Cobb and wide receiver Davante Adams had dinner together the night before the game. Then, in warmups, Rodgers and Nelson played a little catch, despite being on opposite sidelines.

“It was strange seeing Jordy last year in the silver and black for sure just because he’d been with us for so long. And it’s different seeing Randall in the blue and white,” Rodgers said this week. “But (we’re) still close friends and I’m definitely pulling for success for him for the entire season. He’s a fantastic guy. It will be strange to see him. Maybe I’ll get to throw him a couple passes like we did with Jordy last year.

“(Randall and I) usually talk weekly, still keep in touch. We were obviously friends first and foremost from the time I met him down at the (2011 Kentucky) Derby, and became close teammates, spent a lot of time together — holidays and vacations and stuff. That won’t change now that he’s a West Coast guy in the offseason, which is fantastic. But it’ll be fun to see him.”

Truth be told, the Packers would stand a better chance of winning Sunday if Rodgers was still seeing Cobb on a daily basis. With Adams not expected to play because of a turf toe injury suffered last week against Philadelphia, Nelson at home in Kansas on the family farm and Cobb in Big D, Rodgers’ wide receiving corps Sunday figures to consist of Marquez Valdes-Scantling, Geronimo Allison, Jake Kumerow, Allen Lazard and Darrius Shepherd.

Cobb finished his Packers career having caught 517 passes for 6,120 yards and 46 touchdowns in 116 career games, including playoffs. He was on the receiving end of some of Rodgers’ most memorable passes, from a fourth-down, last-minute, playoff berth-clinching touchdown catch-and-run in Chicago in the 2013 regular-season finale to his 75-yarder against those same Bears in last year’s dramatic come-from-behind win in the season opener.

In four games with the Cowboys, Cobb has caught 14 passes for 157 yards and a touchdown. Only No. 1 receiver Amari Cooper (21 receptions, 286 yards, four TDs) has caught more passes for Dallas. Cobb has also handled punt returns and kickoff returns.

“We just felt like he was such a good player. Every time we went against him, it seemed like he was making really important, impactful plays in the game. That’s what you saw on tape,” Cowboys coach Jason Garrett replied when asked during a conference call with Wisconsin reporters why Cobb appealed to the team in free agency. “His reputation as a guy is off the charts, just being a professional and someone who’ll embrace any role on your team. We were excited with the opportunity to bring him here and he’s done a fantastic job so far.”

Cobb did his best to downplay the significance of facing his former team while talking with reporters at the Cowboys’ facility this week — “It’s just Week 5, man,” he told them with a smirk, “another game, another opportunity” — but he did admit in a June interview on ESPN Wisconsin that “it’s like the ex-girlfriend that broke up with you” to face the team you’d spent your entire NFL career with.

As for Rodgers, Cobb’s feelings for his friend remain unchanged.

“I consider him one of my closest friends — football aside. At the end of the day, we’ll be friends in 20 years. This situation’s not going to change that,” Cobb said. “We’ve had a lot of great moments on the field, but we’ve got a lot more ahead of us off the field. He was a guy that stood in my wedding. So we’ll always be close.”

Video: Should Cowboys be a 3.5-point favorite over Packers?

Unlikely to have Davante Adams, Aaron Rodgers and Packers receivers get ready for Cowboys

The Packers quarterback wasn’t ready to rule out his go-to receiver, who is dealing with a turf toe injury suffered against Philadelphia.

Geronimo Allison and Co. are ready to step up this week against the Cowboys.

After struggling mightily against the run, Packers defense aims to ‘be where we’re supposed to be’

The Eagles rushed for 176 yards in beating Green Bay 34-27 on Thursday night.

With the Eagles playing mostly two deep safeties, opportunities presented themselves for Rodgers to take off and run — and he did, to the tune of five rushes for 46 yards.

The Packers are 26th in the NFL against the run, giving up an average of 142.3 yards per game.

Davante Adams ruled out for Sunday, while Packers hold out hope for Bryan Bulaga, Kevin King

Without Davante Adams, the Packers figure to start Marquez Valdes-Scantling and Geronimo Allison at receiver but could turn to Jake Kumerow to pick up some of the slack.

Get the latest analysis, injury reports and highlights as the Packers take on the Cowboys on Sunday afternoon at AT&T Stadium.

Green Bay's star quarterback kept his team moving to a big early lead with more dazzling plays at AT&T Stadium, Aaron Jones scored a career-high four touchdowns and the Packers bounced back from their first loss by hanging on for a 34-24 victory over the Cowboys on Sunday.

Randall Cobb made the Pro Bowl once (2014) in his tenure with the Packers, who selected him in the second round of the 2011 draft.

Randall Cobb has 14 receptions for 157 yards (11.2 average) and a touchdown in four games for the Cowboys this season.