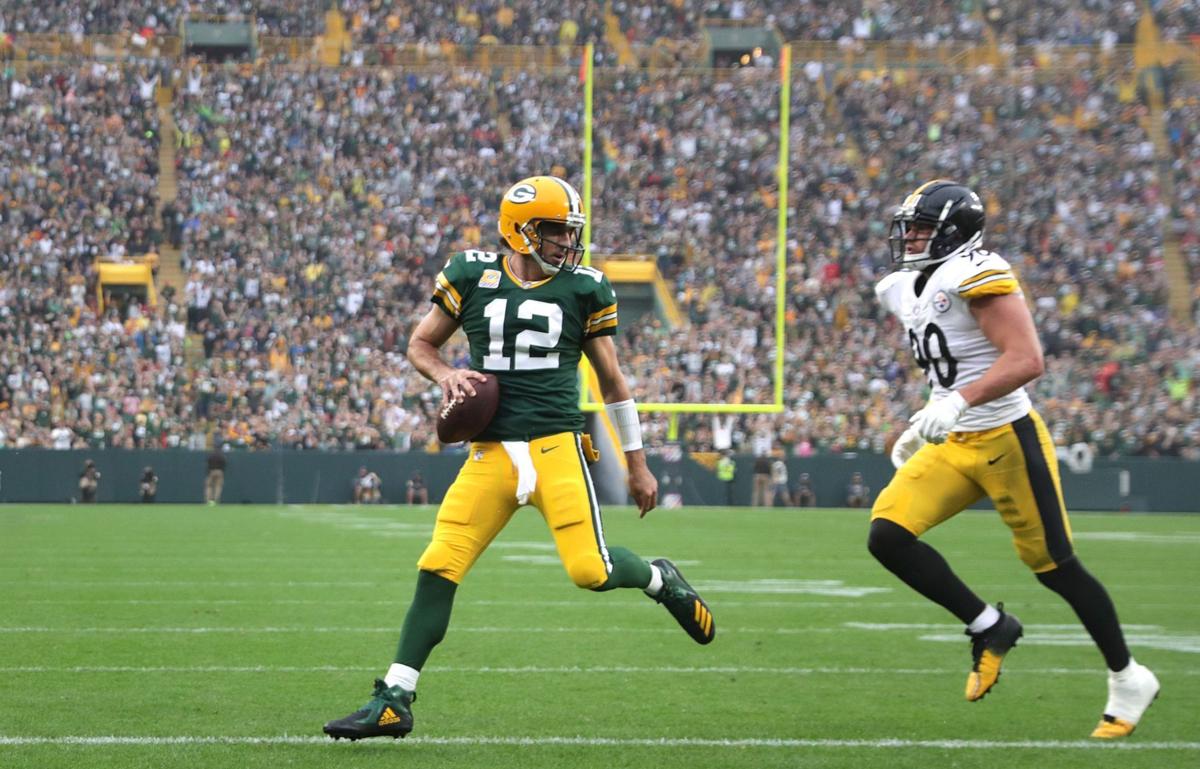 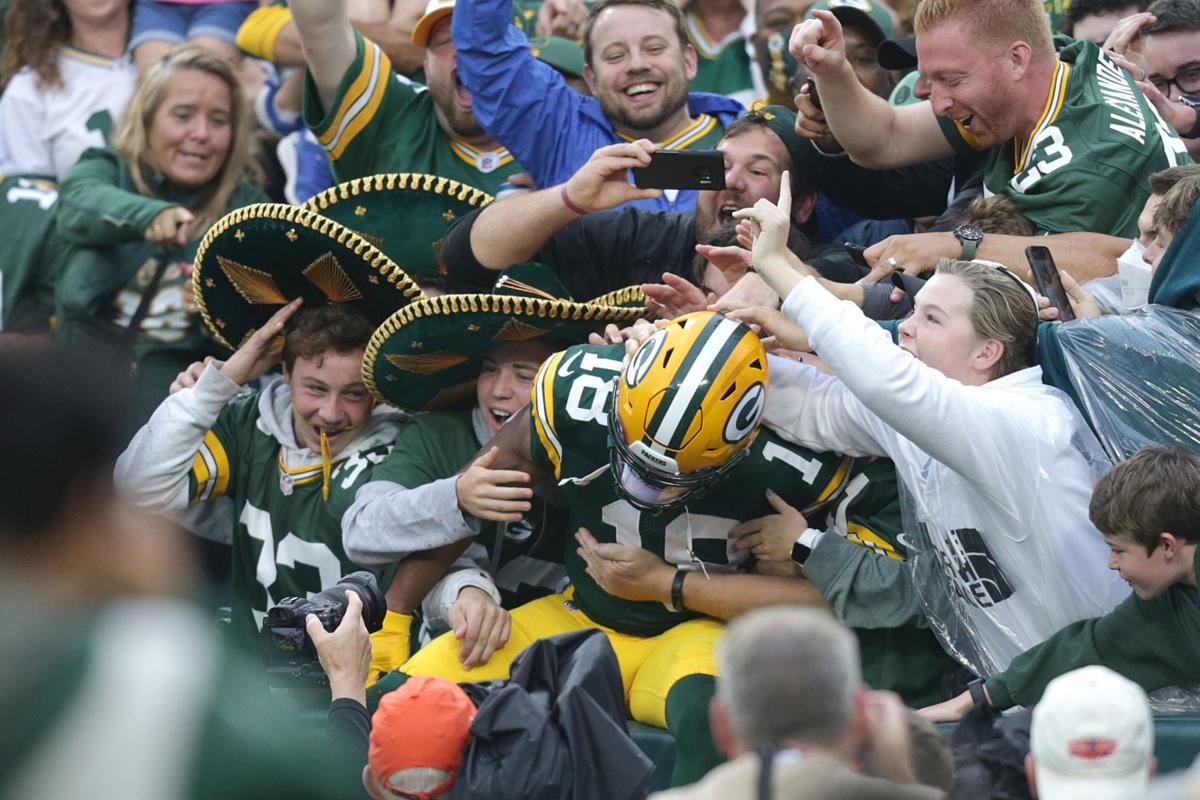 Packers' Randall Cobb is swarmed by fans after his 23-yard touchdown reception in the second quarter. 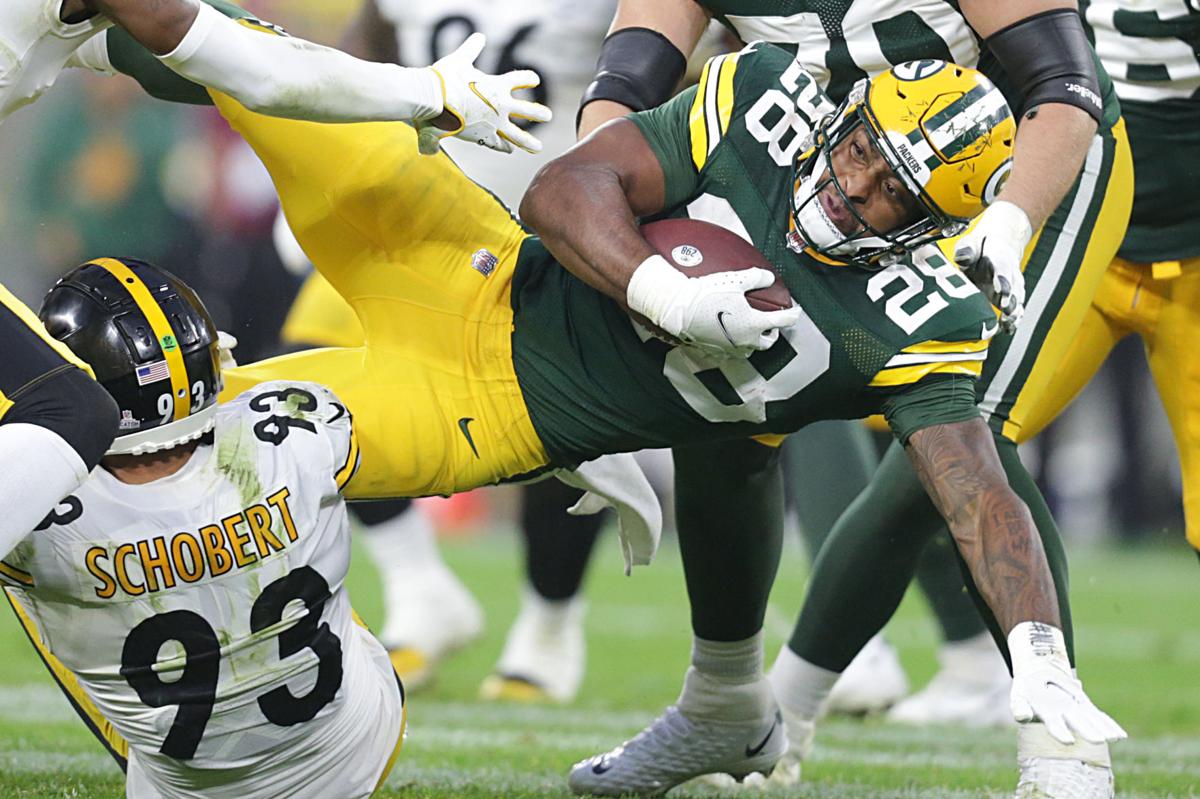 Packers' A.J. Dillon is tackled by Steelers' Joe Schobert during the second half. He finished with 81 yards on 15 carries.

GREEN BAY — Randall Cobb had seen his once-and-now-again quarterback and close friend Aaron Rodgers plenty of times over the past two years. They’d spent time together during the offseason, as well as when his last two NFL employers — the Dallas Cowboys and Houston Texans — had faced Rodgers and the Green Bay Packers during the past two seasons.

But no one has the unique perspective Cobb has on Rodgers, and that viewpoint has nothing to do with the fact that he bunked in with the quarterback for about 10 days during training camp after being re-acquired by general manager Brian Gutekunst — at Rodgers’ behest — in a trade with the Texans right before camp began.

Rather, Cobb can compare what he is seeing now from Rodgers — including in Sunday’s 27-17 victory over the Pittsburgh Steelers at Lambeau Field — to what he saw from him in 2018, while playing alongside Rodgers as the Mike McCarthy era came to an ignominious end.

And beyond Rodgers’ new long-haired ‘do that Cobb seems to think is a definite don’t, Cobb doesn’t see much difference in the 37-year-old Rodgers from then to now — a fact that was brought into sharp relief as the Steelers’ 39-year-old signal-caller, Ben Roethlisberger, very much showed his age on Sunday.

“We’ve got to work on his little man bun, but he looks great. He looks great,” Cobb said after catching five passes for 69 yards and two touchdowns (a 23-yarder and a 1-yarder) to key Green Bay’s offensive effort. “I haven’t seen any change from whenever I was here before.”

Before Sunday afternoon, Rodgers and Roethlisberger hadn’t faced each other in more than a decade, when they met in Super Bowl XLV. In the intervening years, neither quarterback has gotten back to the big game, but it was abundantly clear that Roethlisberger is at the end of the road.

The future Pro Football Hall of Famer was never especially elusive, but he is even more limited in his mobility these days, and he missed wide receiver JuJu Smith-Schuster on a pair of throws that might’ve resulted in 68- and 80-yard touchdowns had he been on target.

For the game, Roethlisberger completed 26 of 40 passes for 232 yards with one touchdown, one interception, one lost fumble and two sacks (78.3 rating). Rodgers was 20 of 36 for 248 yards with two touchdown passes, a 4-yard touchdown run and no interceptions (95.6 rating). While Rodgers was by no means perfect, he can still do all the things head coach/offensive play-caller Matt LaFleur needs him to do to make the offense effective — the team’s abominable performance against New Orleans notwithstanding.

“That’s everything,” said LaFleur, whose team has now won three straight and sits atop the NFC North at 3-1, while the Steelers fell to 1-3. “It doesn’t matter what you call, it’s how those guys go out there and execute. Certainly, you’re never going to be perfect as a play-caller and you just hope that when you’re not, those guys make you look good.”

With Roethlisberger, that doesn’t appear to be the case. The Steelers had 11 possessions Sunday, including six after halftime. Although the second-to-last drive ended in a touchdown that cut the Packers’ 27-10 lead down to 10 points, the other drives resulted in two punts, two failed fourth-down attempts where Roethlisberger threw short of the first-down marker on both fateful plays, and an interception that erased any hope of a comeback after the Steelers got the ball back trailing by 10 with 1 minute, 51 seconds to play.

“I’ll give them credit, they made plays and we didn’t. We have to be better. I need to be better,” Roethlisberger said. “I missed a couple throws tonight. I dropped my elbow down, and when you drop your elbow, the ball isn’t as accurate. That’s just on me to make the better throws. We had some plays. We had some guys open on the sidelines early. I throw them a little faster than I want to at times. At the end of the day, you have to make the throws.”

Rodgers didn’t make every throw, either, and while he acknowledged he isn’t the same type of player he was during that 2010 season when the Packers won the Super Bowl or the 2011 season when he won his first NFL MVP, he remains one of the team’s biggest strengths, not a liability.

Rodgers said his offseason workouts in Southern California have been vital to him staving off the effects of aging, as has a stringent approach to his diet. He also altered his workouts after a 2018 leg injury to make sure he did more weight-room work to give himself enough mobility and escapability, along with leg strength to drive throws, to keep being effective.

“Mike (McCarthy) used to always say this, and I’ve said it many times, but once the legs go, the rest goes,” Rodgers said. “I started squatting after the ‘18, season and that’s been the biggest change for me.

“Obviously you guys have watched me play a long time. I’m not running around like I used to. I think I’ve grown in that respect, being able to make more plays from the pocket, but every now and then I can get out and make something happen. I’ve always been a throw first outside the pocket, but in my younger days, I’d break off some near-explosive runs from time to time.

“Now, I’m limited, to the 5(-yard line) and under usually. But that’s what I want to be. I want to be able to play the way I’ve played. Obviously, that’s changed. I’m not playing the way I played in ‘11 from a physical standpoint, but I’m smarter and I want to keep being able to run bootlegs and extend plays when I can.”

One thing, though, has changed significantly, according to Cobb: Whereas Rodgers was rarely delivering postgame speeches — preferring instead to not just lead by example but do more of his communicating on a 1-on-1 basis — he has now become more of an elder statesman, including delivering the locker room address after Sunday’s win.

“Hearing him give speeches after the game, that’s something that’s new. And I think we all feed off of that, hearing his voice carry so much weight,” Cobb said. “His words, whenever he speaks, we all listen and we understand what this journey is. We’re going to enjoy the moment and we’re also going to look forward to what’s in the future. We want to make sure that we stay locked in each game and continue to grow as a team, together.”

Watch now: Packers add talent on both sides of the ball with deep draft class

Get to know all nine players taken by the Green Bay Packers in the 2021 NFL Draft.

Jim Polzin: Buddy system between Aaron Rodgers and Randall Cobb is working out for the Packers, after all

A quarterback wanted one of his favorite wide receivers back on the team back in July. If Sunday's win over the Pittsburgh Steelers was any indication, it was a trade that will continue to pay dividends for Green Bay.

NFL Network reported that the initial diagnosis was that he damaged his A/C joint, although the severity was unknown.

Grading the Packers: Solid marks across the board in 27-17 win over the Steelers

Jim Polzin grades the Green Bay Packers’ performance in their 27-17 win over the Pittsburgh Steelers at Lambeau Field.

Receiver finishes with five catches for 69 yards and two touchdowns.

The Steelers lost their third in a row in falling to Green Bay on Sunday, and their prospects for a turnaround look as gray and soupy as the sky that hung over Lombardi Avenue.

In his second year with Dallas, Mike McCarthy has maintained a reputation he earned in his long tenure with the Packers: He makes some decisions during the game that defy the analytic sheet, football common sense, or logic.

Coach Matt LaFleur had confirmed that Alexander’s injury is to his shoulder — not, for example, a broken collarbone — and promised a further update on Wednesday, when the team returns to practice.

In AJ Dillon, Packers have not only a ‘cold-weather Green Bay back’ but also a ‘really sharp’ minded player

Arizona received eight of 12 first-place votes for 378 points in balloting Tuesday by media members who regularly cover the NFL.

All-Pro Jaire Alexander may need surgery for the right shoulder injury he suffered Sunday against Pittsburgh, and Kevin King just returned to practice after missing the past two games because of lingering concussion effects.

Jaylon Smith led the Cowboys in tackles last season, but had fallen down the Cowboys’ linebacker rotation less than two years removed from being selected to the Pro Bowl in 2019.

The punter is averaging 47.5 gross yards and 42.9 net yards on his 13 punts, with five placed inside the opponents’ 20-yard line and without a single touchback.

The rookie cornerback is still learning to play the position he was moved to in college.

Packers' Randall Cobb is swarmed by fans after his 23-yard touchdown reception in the second quarter.

Packers' A.J. Dillon is tackled by Steelers' Joe Schobert during the second half. He finished with 81 yards on 15 carries.