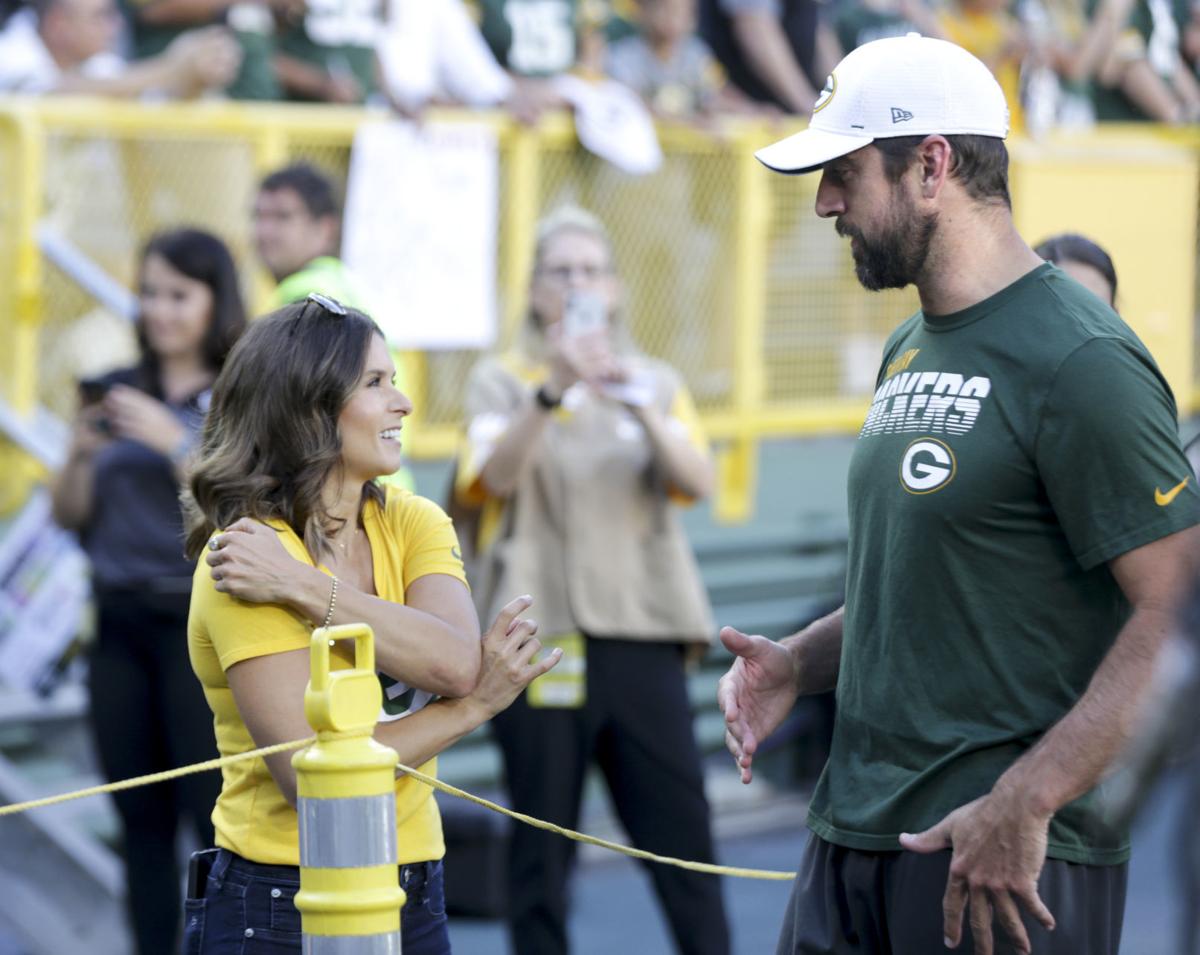 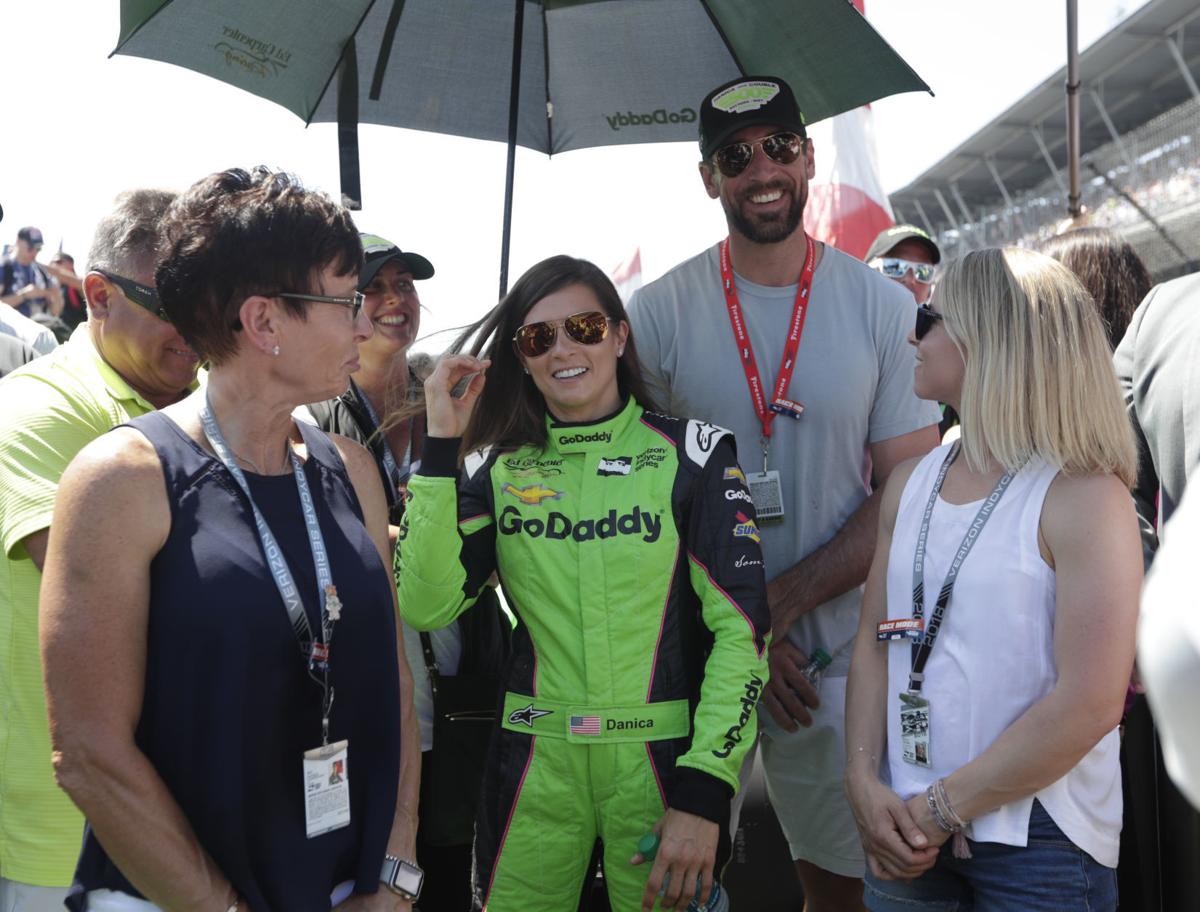 Danica Patrick stands with her mother Bev Patrick, left, sister, Brooke Selman and Green Bay Packers quarterback Aaron Rodgers before the start of the Indianapolis 500 at Indianapolis Motor Speedway in Indianapolis on Sunday, May 27, 2018.

The couple leased the home from English singer Robbie Williams over the summer, according to the Mercury News in San Jose, California and TMZ.

The 4,636-square-foot Mediterranean-style home has four bedrooms and four bathrooms, as well as a two-bedroom guesthouse. It also features a media room, a game room, a pool and beach access, among many other amenities.

The Mercury News story featured several photos of the home.

Patrick posted a picture on Instagram of Rodgers with her family at Christmas.

A very merry Christmas it was! 🎁 we already have so much to be grateful for and then today, we got even more. And not necessarily just stuff.... but stuff that had so much meaning and thoughtfulness. All the feels today. ❤️

The Onion takes a jab at Aaron Rodgers, saying the QB will 'dedicate his off-season to growing as a brand ambassador'

The satirical publication, which got its start in Madison, had some fun at the Packer quarterback's expense Wednesday.

The former race driver and the current Packers' quarterback have been dating since early 2018.

Will Aaron Rodgers really be on Sunday's 'Game of Thrones'?

The Packers quarterback has hinted he will make a cameo, and the speculation spiked this week when Aaron Nagler of Cheesehead TV tweeted that Rodgers will be on the show.

“Instead of getting surgery post-season, (I) decided to kind of go through a different routine with my knee than I’ve done in the past,” Rodgers said. “And I’m feeling really, really good.”

On his 35th birthday, Aaron Rodgers faces his ‘football mortality,’ past ‘wasted opportunities’

"Obviously, I’ve got a lot more gray in the beard than I did a few years ago,” Rodgers said. “So, I know that football mortality catches up to everybody, and you never want to lose a season. Especially when you felt great starting the season about our prospects."

Danica Patrick encountered some resistance from Packers quarterback Aaron Rodgers when she wanted to set up a woman cave in the house they share in Green Bay.

One of the funniest moments to come out of Danica Patrick's turn as host of the ESPY Awards featured her famous boyfriend in a supporting role.

Danica Patrick's monologue to open the ESPYs went over like, well, a flat tire at the Indianapolis 500.

Danica Patrick ended the Indianapolis 500 on Sunday much like she did the Daytona 500 in February: With a ride to the infield care center and feelings of frustration.

Patrick is set to retire from auto racing after Sunday’s Indy 500.

Danica Patrick's overall record on the track was middling, with one victory in 13 years of big-league racing. That fueled the debate about whether she deserved the notoriety she received and made her one of the most polarizing figures in sports.

With Aaron Rodgers cheering her on, Danica Patrick readies for final race

Danica Patrick was looking relaxed at the final media day of her racing career, but admitted she has never been as nervous as she is heading into her final Indianapolis 500.

While on a mission trip in India with girlfriend Danica Patrick, the two-time MVP made sure the 82-year-old Tibetan Buddhist leader could show his support for the Packers next season.

Aaron Rodgers will be cheering on Danica Patrick at Daytona 500

"He's going to be here to support me and he's excited," Patrick said of her boyfriend and Green Bay Packers quarterback. "I'm excited to show him what I do."

Danica Patrick and Aaron Rodgers are an item

Danica Patrick, a Chicago Bears fan, confirmed the rumors on Monday that she and Aaron Rodgers are dating.

More than an inch of rain could fall and there could even be some rumbles of thunder across the area, according to forecasters.

Danica Patrick stands with her mother Bev Patrick, left, sister, Brooke Selman and Green Bay Packers quarterback Aaron Rodgers before the start of the Indianapolis 500 at Indianapolis Motor Speedway in Indianapolis on Sunday, May 27, 2018.