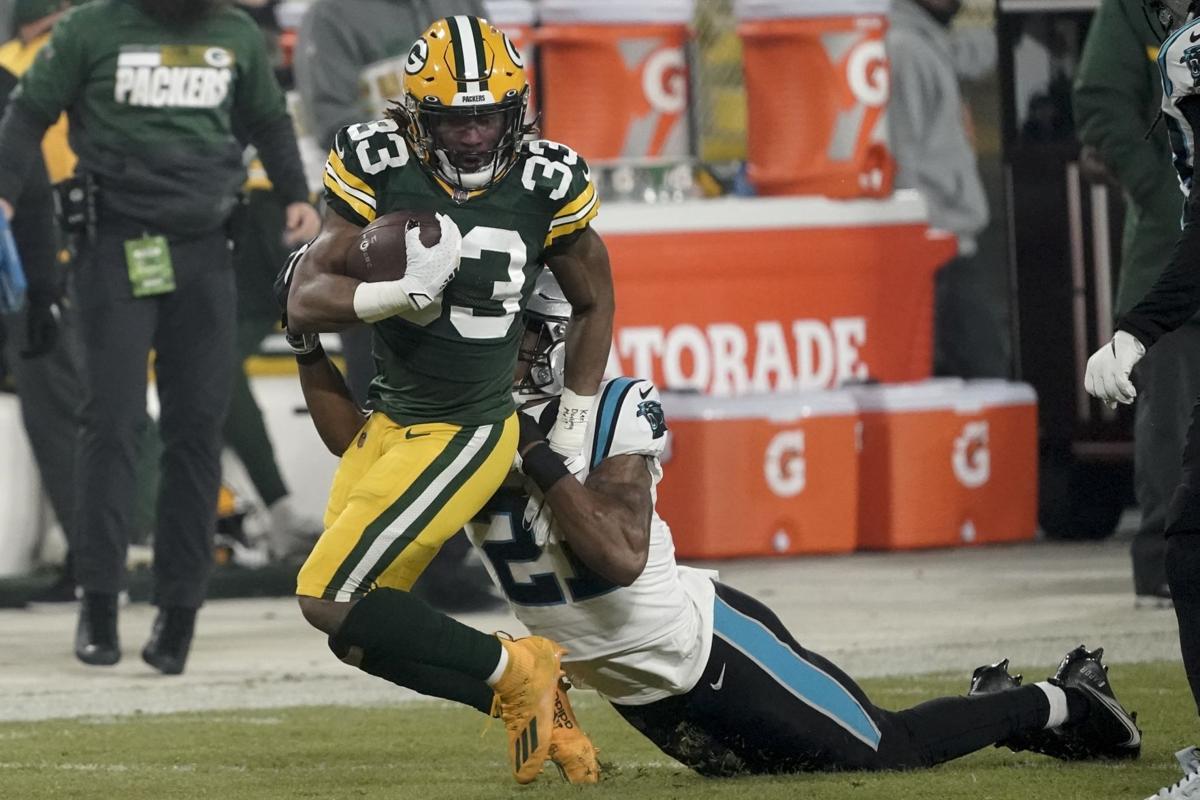 Aaron Jones is brought down by Panthers' Jeremy Chinn during the first half last Saturday at Lambeau Field. 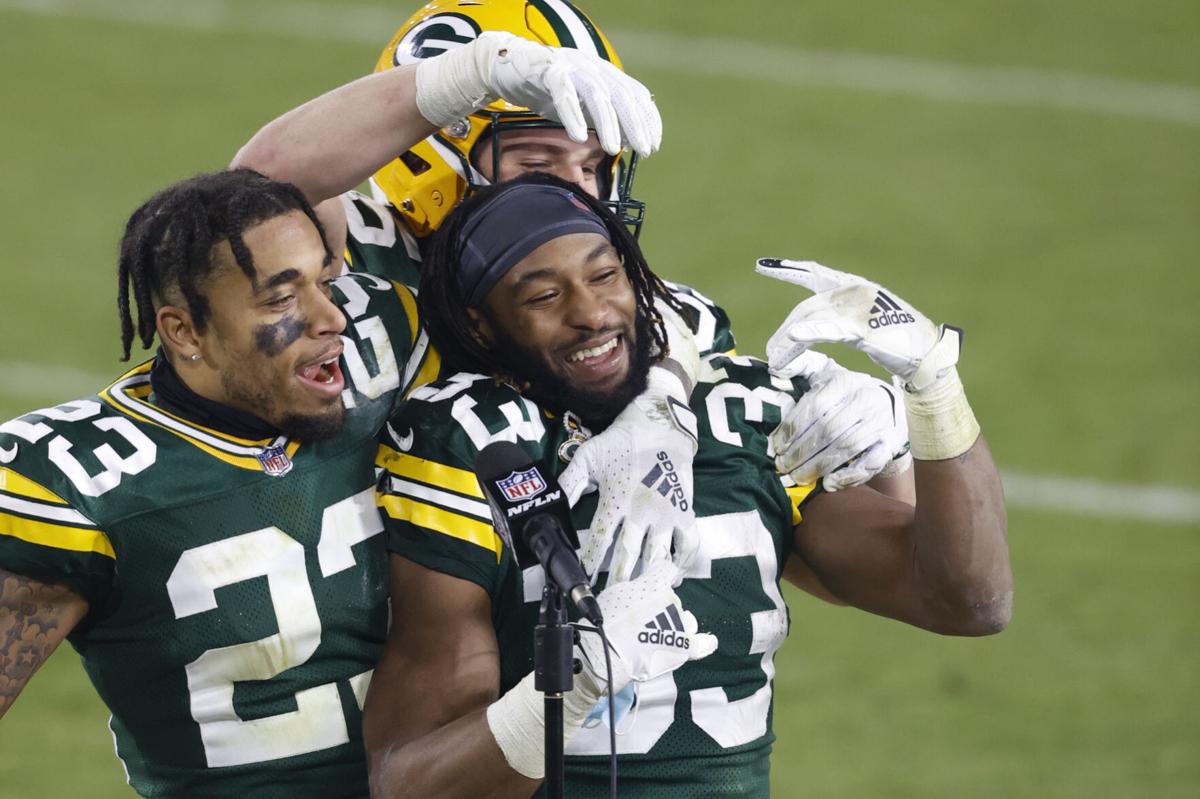 But when it came to trying to explain why running back Aaron Jones is so productive late in seasons, well, the Green Bay Packers offensive coordinator still had plenty to say — but not much of an actual explanation.

“I’ll tell you, he’s special. It’s one of those things,” Hackett said as the Packers prepared for Sunday night’s matchup with the Tennessee Titans and their top-flight running back, Derrick Henry, at Lambeau Field. “When it comes to his size, you don’t think that he would have that power that he has. But his balance is unbelievable and his ability to have his foot in the ground and still be able to take impacts and bounce off people, it’s pretty incredible.

“He’s got this innate slashing ability to put his foot in the ground, get downhill and get positive yards. Also, he can catch out of the backfield. There’s so many things he can do. He does get better as the season goes, and that’s what you’re looking for. You’re looking for everybody to be playing at a high level in December and winning football games as you move closer to the playoffs. He’s done a great job.”

Sunday night’s matchup between the Packers (11-3) and Titans (10-4) will be Green Bay’s fourth game this month. (The Packers wrap up regular-season play at Chicago on Jan. 3.) Through three December games, Jones has carried 50 times for 344 yards (6.9 yards per carry) and two touchdowns, and he’s eclipsed the 100-yard mark in five of his past seven December outings.

And while Henry seems better-suited for bruising late-season runs (6-foot-3, 247 pounds), the 5-9, 208-pound Jones doesn’t fit that ground-and-pound stereotype at all. And yet, he produces.

“That’s a heck of a question,” Packers coach Matt LaFleur replied when asked about Jones’ Decembers to remember. “I can only speak to the time that we’ve been here. I think he’s done a great job of taking care of his body and staying healthy throughout the course of the season. He’s just a guy that just continues to get better and better as the season goes along. And it’s not always in the production, either. It’s (in) everything he does — the way he approached the daily grind, the preparation, what he does when he’s not getting the ball. He is the epitome of a team player. And we sure are lucky to have a guy as dynamic as he is.”

Especially down the stretch. In his fourth season — and headed toward unrestricted free agency if he and his new agent, Drew Rosenhaus, can’t strike a deal on an extension before hitting the open market in March — Jones has played in 15 career December games. The Packers’ record in those games? 11-4.

In December, Jones has carried the ball more times (181), gained more yards (1,001), averaged more yards per carry (5.5) and scored more touchdowns (10, tied with his September total) than in any other month. While Jones said “investing in my body” by improving his diet and doing more massages and cold-tub treatments has helped — “You don’t get a second body,” he said, “and you’ve got to be ready to play at all times” — Jones’ commitment to “become a pro” after not being as focused on his approach earlier in the season might be a bigger reason, in addition to just being more at ease later in the season.

“I feel like I get better as the season goes on. You get more comfortable, you’re seeing things better, you get in the flow,” Jones said. “In Week 1, 2, and 3, where everything’s happening so fast, it’s even more slowed down (late in the year) than before. I think December football, part of it is a mentality. And our guys, we have a great mentality of what December football is.”

Jones finished each of his first two seasons on injured reserve because of knee injuries. Last year, he was fantastic in the final four games — 77 carries for 439 yards (5.7-yard average) and five touchdowns, putting him over the 1,000-yard mark for the first time in his career. Entering Sunday night, he needs just 32 yards to hit that benchmark again. And on Monday, he was named to his first Pro Bowl after he was upset about being left off the NFC roster last season.

“Last year, I felt like I was snubbed. So to put in the work this offseason and get the recognition, that achievement is huge. I’ve been left off a lot of lists in my life, so to be on that one is definitely a special one,” Jones said. And 1,000 yards? “It’s the NFL, and that’s a hard thing to do. I don’t see it as something that comes easy. It’s something that you’ve got to work for.”

And for now, Jones insists he’s working for the NFC’s No. 1 playoff seed and a Super Bowl LV berth — not his next contract. He even said he’s not taking any additional time in the final seeks of the regular season to soak in what could be his final games in Green Bay.

“I said it before, where my heart is at. So I’m not even thinking about that,” Jones said. “I’m just thinking about going out there one game at a time, and this week it’s Tennessee to help secure the No. 1 seed. I’m not worried about what’s going on in the future or any of that. I’m here to play football. That’s what agents and family and every(one) else is for. They help you all with that. So I just focus on football.”

The Packers listed No. 2 running back Jamaal Williams (quadriceps) as doubtful on their injury report, meaning he is unlikely to play. Jones (toe) was removed from the report and is good to do. … Williams’ absence means rookie running back AJ Dillon, who was sidelined for nearly six weeks while on the reserve/COVID-19 list, will be in line for more playing time. He had one carry for 18 yards against Carolina last week after Williams’ injury. “AJ’s had a great week of practice,” LaFleur said. “You can tell he’s starting to get his wind back. Certainly, anytime you take that type of layoff, it does have an effect on you. We’re just really happy to have him back. He’s looked good and he’ll be ready to go.” … Safety Will Redmond and tight end Jace Sternberger were both ruled out after not passing concussion protocols. … Despite giving his players the entire Christmas Day holiday off, LaFleur was planning to head to his Lambeau Field office after he, wife BreAnne and the couple’s two sons opened presents in the morning. “I’ll try to take a little bit of time off, at least in the morning,” LaFleur said. “But there’s a job that needs to get done and we’ve got a tremendous task in front of us. It’s whatever it takes. I’ll definitely be putting some time in to just making sure that we’ve got everything in order to go out there and play our best game on Sunday night.”

Get the latest postgame updates after the Packers rolled over the Titans 40-14 in a Week 16 matchup at Lambeau Field.

'You shouldn't be here': J.J. Watt delivers impassioned speech on importance of effort in NFL

Saying he and and his teammates have the "greatest job in the world," the three-time defensive player of the year railed against a lack of effort from his fellow players as the Texans fell to 4-11 with a loss to the Bengals.

Crown 'em? Not yet, but Packers move a step closer to NFC’s No. 1 seed by obliterating Titans

Davante Adams caught three of Aaron Rodgers’ four touchdown passes as the Packers defeated the Titans 40-14 for their fifth consecutive victory on a snowy Sunday night at Lambeau Field.

AJ Dillon carried 21 times for 124 yards and two touchdowns, while Derrick Henry rushed 23 times for 98 yards in the Packers' 40-14 victory over the Titans at snowy Lambeau Field.

Tom Oates: Packers turn in most complete performance of the season, refusing to back down to Titans

Despite a brief lapse, the Packers kept the pedal to the metal for 60 minutes by getting huge production from quarterback Aaron Rodgers, wide receiver Davante Adams and running backs AJ Dillon and Aaron Jones, they didn't let Derrick Henry beat them with his wheels and they manhandled a likely playoff-bound team.

Bakhtiari, 29, signed a four-year, $103.5 million contract extension on Nov. 15 that made him the NFL’s highest-paid offensive lineman.

Packers, Matt LaFleur know all too well that slowing down ‘beast’ Derrick Henry will be vital against Titans

Tennessee's Derrick Henry enters Sunday night's game against Green Bay only 321 yards away from becoming the eighth back in NFL history to rush for 2,000 yards in a season.

What's going to settle the MVP debate between Patrick Mahomes and Aaron Rodgers?

Only four weeks remain in the NFL season, which means the race for the Most Valuable Player Award is coming down to the wire.

Despite the Packers' long history of elite-level offensive linemen, Elgton Jenkins became just the third lineman in franchise history to be chosen to the Pro Bowl in his first or second NFL season.

Tennessee leads the league with 436 points and is tied with Kansas City averaging 31.1 points a game — best in the NFL.

Davante Adams frustrated at being a marked man, as Packers seek to free him up

"I was definitely pissed off,” Davante Adams said after Carolina limited him to seven catches for just 42 yards — his lowest yardage output for a full game this season.

Center Corey Linsley was not selected for the Pro Bowl, despite having the best season of his seven-year NFL career.

Chasing AFC South title, 10 wins not enough for Titans as they prep for Packers

The Titans face their biggest challenge Sunday night to winning the AFC South for the first time since 2008 when they visit the Green Bay Packers (11-3), currently the top seed in the NFC.

“Anytime you don’t play your best as a football team, it is disappointing. We have a high standard,” coach Matt LaFleur said.

The Titans finished 9-7 in Matt LaFleur's lone season as offensive coordinator and failed to make the playoffs.

Green Bay Packers center Corey Linsley has been activated from injured reserve after missing his team's past three games.

Nathaniel Hackett was interviewed by the Atlanta Falcons for their head coaching position on Thursday afternoon.

Aaron Jones is brought down by Panthers' Jeremy Chinn during the first half last Saturday at Lambeau Field. 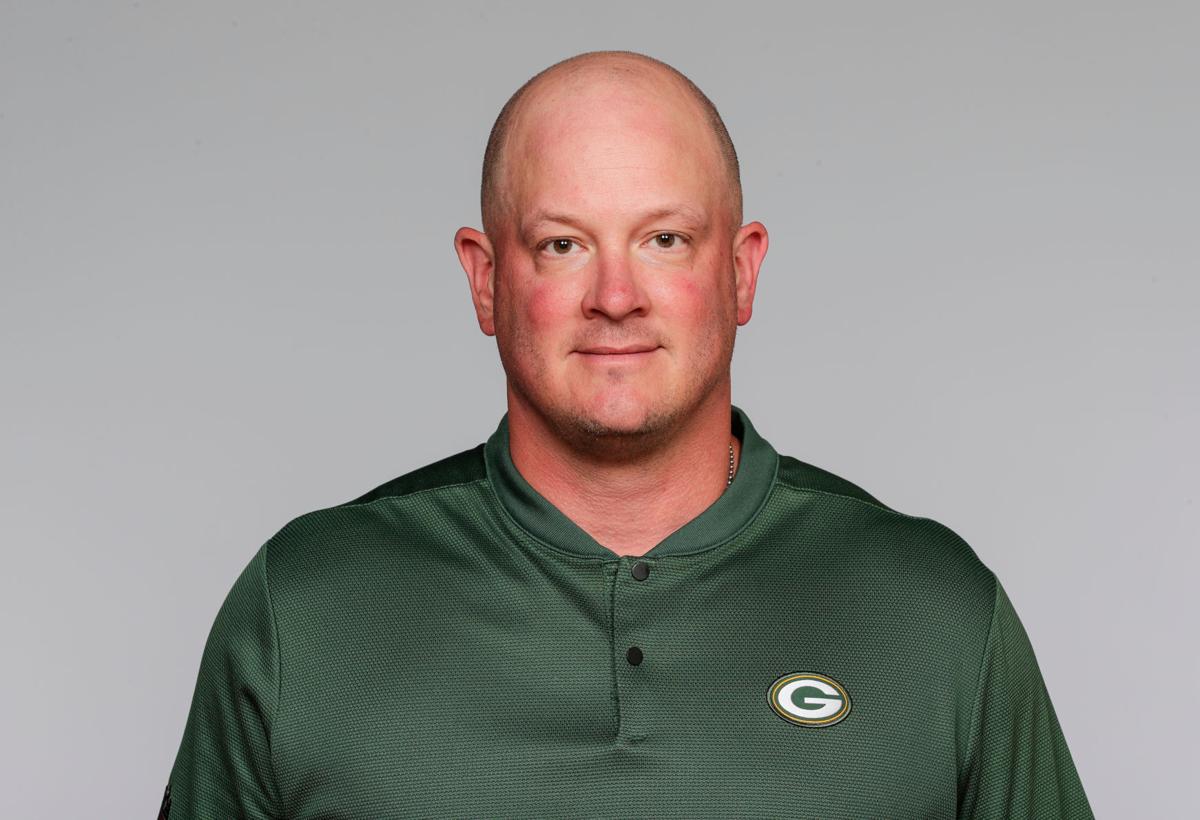