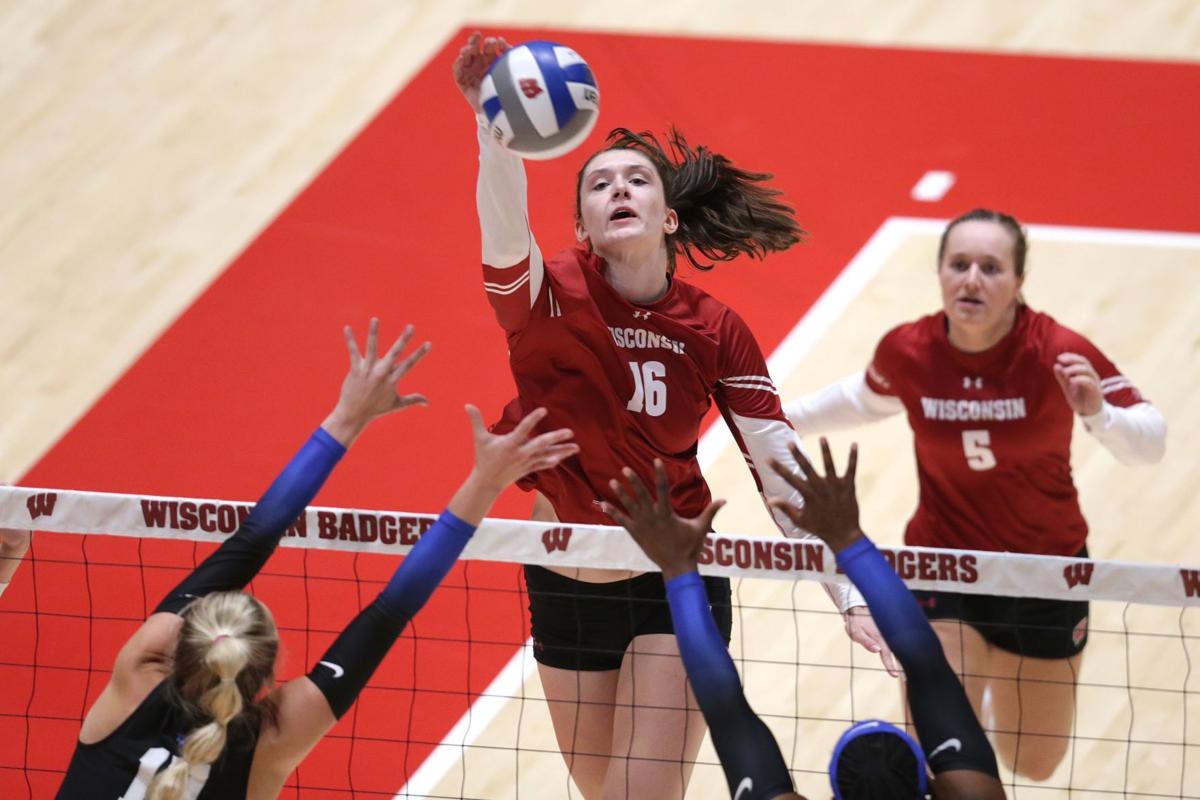 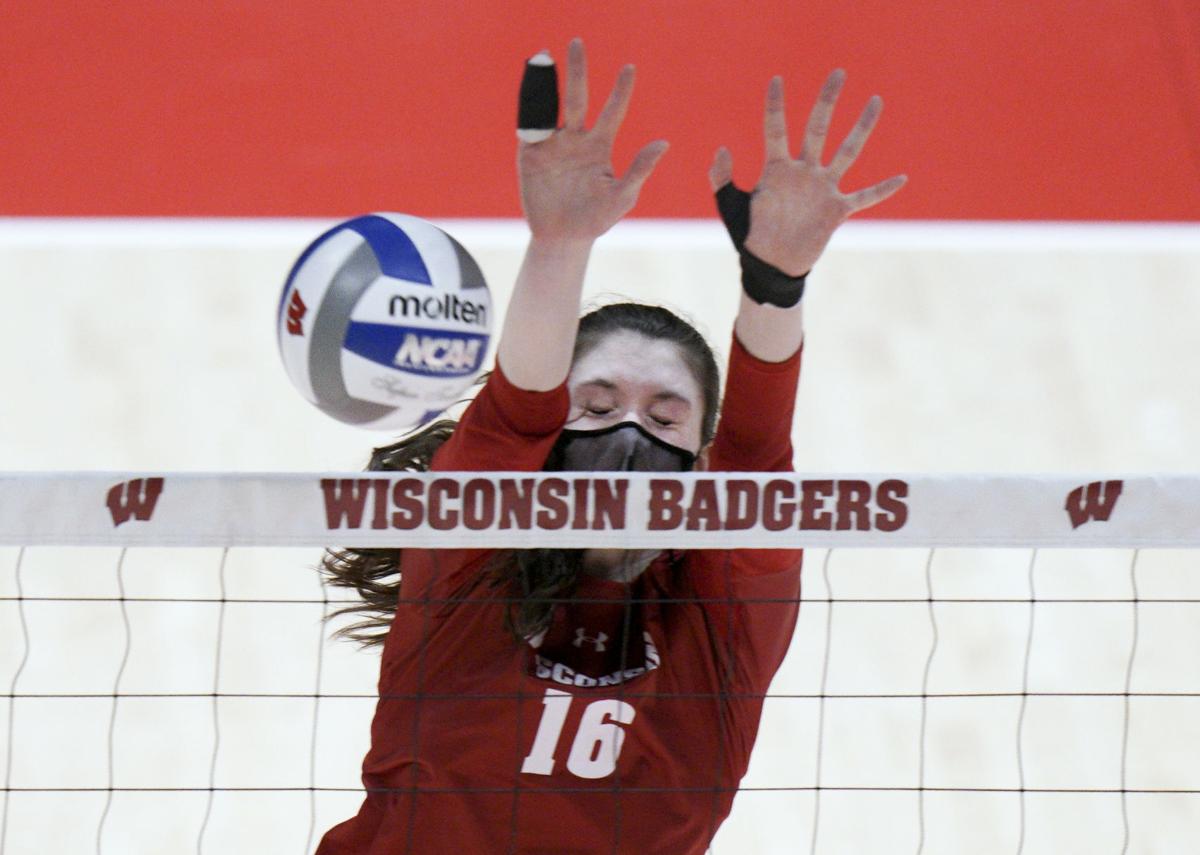 Wisconsin’s Dana Rettke tries to block a Michigan shot during their match last season at the UW Field House.

These are legacy shaping days for Dana Rettke.

She already is one of the most celebrated players in college volleyball history, but she’s looking to leave an even more lasting impression as she plays her fifth and final season for the second-ranked University of Wisconsin.

Rettke, of course, has established a formidable legacy as a centerpiece of one of the best eras of UW volleyball, including back-to-back Big Ten Conference titles and NCAA final four appearances in the past two seasons.

She’s amassed a slew of individual honors along the way. She’s one of six four-time first-team All-Americans in history and almost certainly will become the first five-time first-teamer after this season. She was the Big Ten Player of the Year and Female Athlete of the Year in 2019-20. This week she was named a nominee for the Sullivan Award for the nation’s top amateur athlete for the second consecutive year. And so on and so on.

And while Rettke is truly appreciative of all the accolades that have come her way, her legacy thoughts are in an entirely different direction.

“I’ve kind of shifted my lens on this sport and where I want this program to be and where I want to leave my legacy,” said Rettke, who needs just three kills to become the fourth player in program history with at least 1,500 kills. “I’ve been coming in the gym every day with that drive that I don’t really think I’ve had. It’s definitely different than my first four years, that’s for sure.

“In this gym I want to be remembered as someone who worked hard but was also understanding and loved her teammates. I definitely think I’m a different competitor than your stereotypical competitor, and I think that’s great to have different competitors in the gym. Dana pre-Wisconsin was not a competitive person at all. Coming to this program has changed that a lot for me. I want to be remembered as someone who leaves it all out there and just loves the crap out of her teammates.”

Rettke understandably would love to add the program’s first NCAA championship to that legacy, but she’s not obsessed with that.

“Obviously championships are important and I work for them every single day and I want them,” she said. “That’s part of the drive. But I’m definitely somebody who embraces the journey more than end result.

“I’ve actually had people ask me in the past couple weeks that if you don’t win a championship is this season a fail? That’s like the stupidest question I’ve ever heard. Sorry, but it is. No season is ever going to be a fail because you don’t reach that one goal. Look at all the other great things we did last year and all the great things we have in front of us.

“Yes, championships are important. Yes, I work for them every day. But it’s the little things that happen in the gym, in the locker room and just out with your teammates. Getting to know them as people is just so beautiful and something so unique to sports. You don’t get that in the business world, really.”

This former Badgers star missed out on Olympic volleyball gold. Here's how she hopes to change that in Paris

It was that desire to spend another year experiencing the camaraderie of teammates that ultimately drove her decision to return for her fifth year at UW, taking advantage of an opportunity offered by the NCAA for a bonus season in light of last year’s COVID-19 distorted season.

The Badgers had eight seniors from last season in that position and five of them opted to return. Rettke was the last to make that call, deciding to postpone her professional career and likely six-figure salary.

Her decision-making process began almost immediately after the Badgers’ loss to Texas in the NCAA semifinal in Omaha, where teams had spent two weeks in a bubble as the bizarre 2020 season came to an end in April of 2021.

“Sitting in the locker room after that match, it was like I don’t know what’s next,” Rettke said. “This could be the last time I wear a Wisconsin jersey. It also could not be. It was a weird feeling.”

That feeling persisted until June, when Rettke finally made her decision.

“Honestly I was a little surprised because of how long it was taking,” said setter Sydney Hilley, Rettke’s best friend and roommate who had made that call early on. “I thought there’s no way she’s staying. I tried to be as patient as possible and try not to push her in any direction because I wanted what was best for her. But when she did, it was immediately, OK, let’s go find a place to live because I was waiting that whole time to sign a lease.”

Rettke said she felt an immediate sense of relief upon making her decision and she knew she’d made the right call as she began summer workouts with her teammates.

That sense only has grown through the opening weeks of the season as she performs at a peak level. She is pain free after dealing with a nagging shoulder problem much of the past two seasons.

This freshman traveled 5,000 miles to join the Badgers volleyball team. She now leads the team in kills

There’s extra pep in her step. More sting in her swing.

“She’s hitting as hard as she ever has,” coach Kelly Sheffield said. “She’s moving well. Athletically, she just looks even better than what she has. That’s not a knock on what she’s done in the past, she’s just taking it up another notch. She’s playing really clean. I don’t think she’s ever played better.”

The numbers reflect that through eight matches. She leads the nation with a .569 hitting percentage with just seven errors in 137 attempts. For some context, that’s nearly 150 percentage points better than her career mark heading into the season (.420). The program’s career record before Rettke was .375 by Haleigh Nelson.

Rettke spent much of the offseason rehabbing and strengthening her shoulder. But that wasn’t all she worked on.

“Also mentally I’m in a much healthier state,” she said. “I’ve been working a lot with sports psychologists and making sure that I’m back to the place where I know I need to be to get better.

“I feel pretty strong. Overall I feel way better. I’m a lot healthier and energetic than I was last season. I just hope that this energy is going to propel me to the next level.”

The freshman has six kills on six swings during a three-set victory over UW-Green Bay.

Teams could meet again in postseason.

No. 2 Badgers volleyball team rolls over No. 10 Baylor

Dana Rettke and Danielle Hart combine for 28 kills for the Badgers (2-0).

The outside hitter expects to get emotional thanking fans for their support.

"There’s just no way we could look back and say we just won a Big Ten championship and just made it to our fourth final four and say this was a failure," Kelly Sheffield said.

Molly Haggerty and Dana Rettke record 17 and 16 kills respectively for UW, which will face Texas on Thursday night.

Devyn Robinson moves from the right side to middle blocker and has a big match.

Loss to Maryland drops Badgers volleyball from No. 2 to No. 5

The Badgers dropped three positions to No. 5 in the American Volleyball Coaches Association rankings following a loss at Maryland and a victory at Rutgers over the weekend.

A look at Lauren Barnes' volleyball career with the Wisconsin Badgers.

Five volleyball teams made it through the first weekend of Big Ten Conference play undefeated. To the surprise of most, the University of Wisc…

No. 5 Badgers sweep No. 7 Minnesota in volleyball

Fifth-year outside hitter steadies the team after a first-set loss, plays one of the "best matches of her career."

Injuries have opened the door for Anna MacDonald to make an impact, and she's taking advantage of her chances. She's coming off her best match in last week's win over Illinois.

Izzy Ashburn has found her home on the volleyball court by not settling for one spot. The Badgers junior has embraced playing multiple positions to help her team succeed.

UW dominates the fifth set in an extremely tight match.

The Big Ten honors both Dana Rettke and Sydney Hilley after they helped the Badgers sweep their conference volleyball matches over the weekend.

The Badgers volleyball team feared the worst when Giorgia Civita tore her ACL at the end of September. She already is back contributing for the No. 3 Badgers, who face No. 6 Nebraska on Wednesday.

UNCUT Madison is a student-run multi-media site where student-athletes share their stories.

Wisconsin’s Dana Rettke tries to block a Michigan shot during their match last season at the UW Field House.