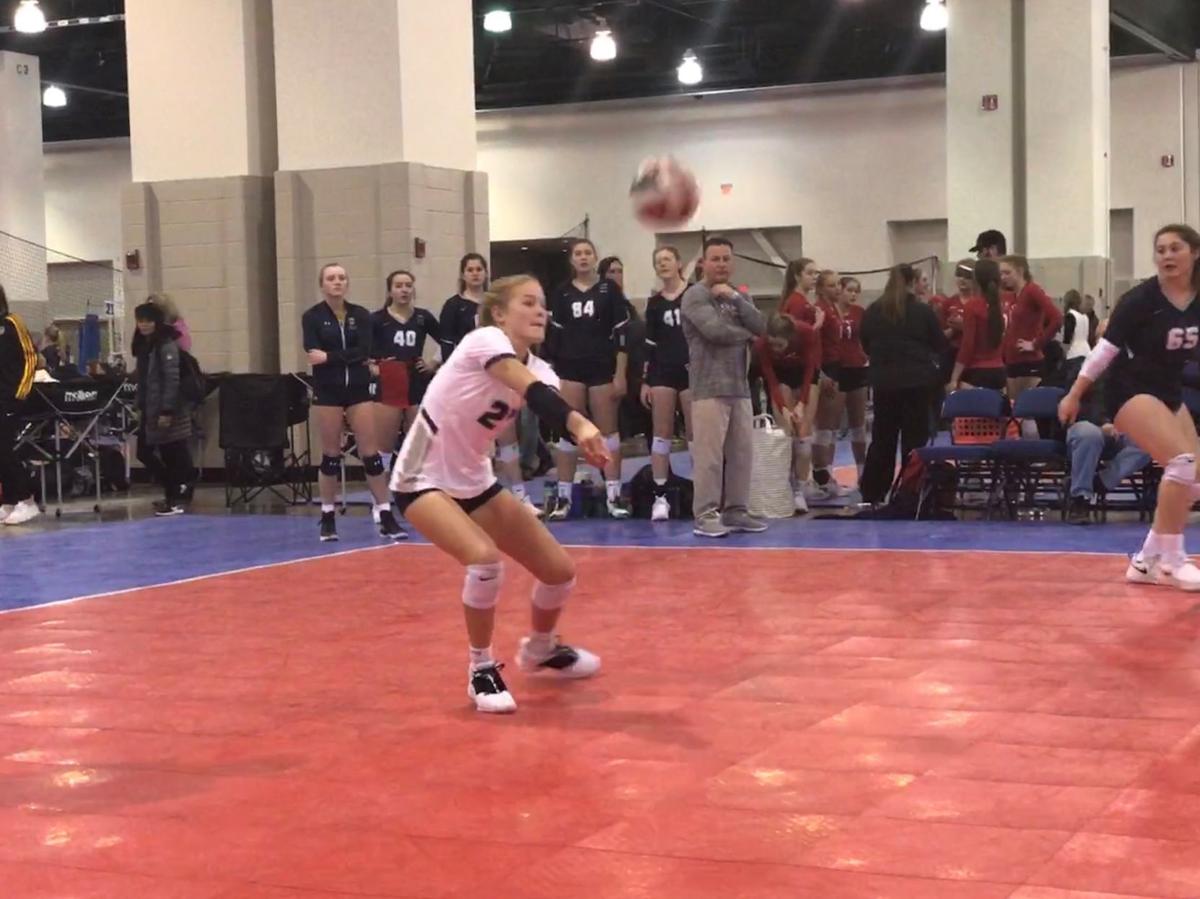 Saige Damrow started playing club volleyball at Milwaukee Sting when she was 8, playing on the 10 year-old team, and has always played up at least one year. Since moving to FC Elite, based in the Appleton area, she has played up two years the past two seasons. As a 12 year-old she was named captain last year on her 15 open team. 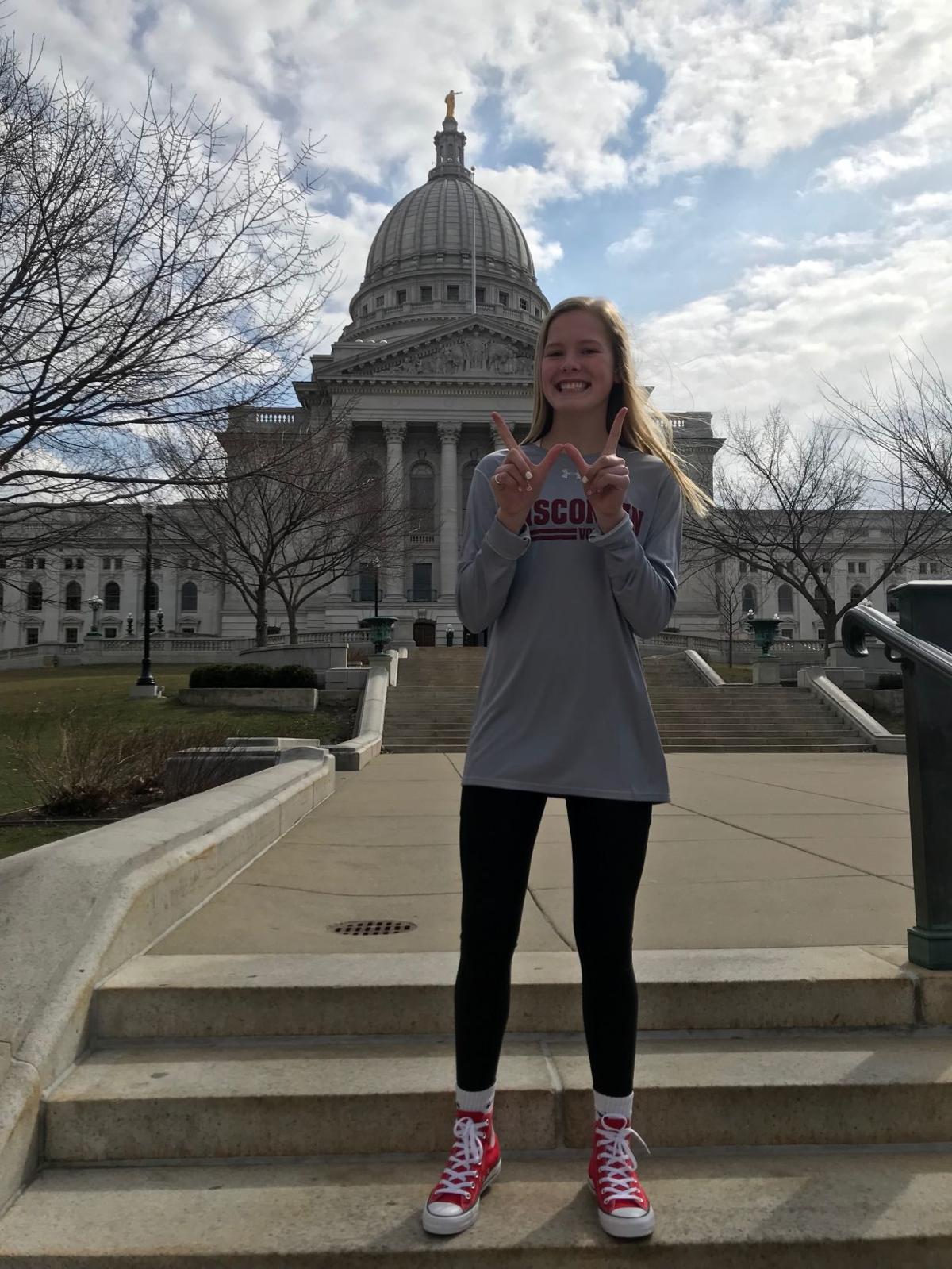 Saige Damrow’s teammates when she eventually becomes a Badger are largely a mystery right now. She, of course, becomes the first member of UW’s 2023 recruiting class and the Badgers have yet to receive any commitments for the 2021 or ’22 classes.

As a rule, Kelly Sheffield is not a fan of recruiting middle school kids. But apparently, Saige Damrow is an exception to that rule.

Damrow, a 5-foot-8 libero from Howards Grove, committed to play for Sheffield’s University of Wisconsin volleyball program earlier this month to culminate an exhaustive recruiting process that included many of the top programs in the country.

That recruiting process began roughly a year ago while Damrow was still in seventh grade.

It started with a scholarship offer from Illinois. Minnesota wasn’t far behind and soon there was a crowd of coaches on hand for all of her matches on the club circuit. Finally, UW joined the pursuit.

“I don’t know how you can say it, but they were almost late to a seventh grader,” said Brett Damrow, Saige’s father and coach with the FC Elite volleyball club and her future coach at Howards Grove High School. “It was amazing the top 20 coaches that were sitting there watching her.”

It wasn’t as if the UW coaches were unaware of Damrow. She had attended volleyball camp at UW the past two summers and had even tagged along with a friend on a recruiting visit while just a sixth grader.

But it wasn’t until the Mideast qualifier in Indianapolis that UW’s interest became official when Brett Damrow spotted assistant coach Brittany Dildine among the coaches lined up behind the court to watch a match.

“I can still remember that day, when I looked over and there’s Wisconsin,” Brett Damrow said. “That was a neat experience for Saige because that’s who she was waiting for.”

And while she had been doing her due diligence, visiting numerous schools including two trips each to Illinois and Minnesota, there was never much doubt about where Saige’s heart resided. She had been a big Badgers fan going back to when as a 7-year-old she watched Lauren Carlini lead the Badgers to the NCAA title match in 2013.

“It’s definitely been a dream school since I was little,” said Saige Damrow, who counts Kelli Bates among her favorite Badgers and role models. “I kind of just always knew if I was going to go somewhere and I really wanted an offer it was going to be from Wisconsin. I just knew it was the school for me, being in my home state and I really want to make Wisconsin people proud.”

But if the NCAA had its way Damrow might’ve had to wait a few years to make her commitment to her dream school. The NCAA is expected to pass legislation later this month designed to put the brakes on early recruiting, essentially cutting off contact between college coaches and players until their junior year of high school.

It’s a topic that has come up over the years with Sheffield and Brett Damrow, who’s been coaching in high school for 15 years and club volleyball for seven, including several years at Milwaukee Sting.

“I talked to Coach Sheffield about this when he was recruiting a different player of mine and he asked, ‘How young is too young?’” Damrow said. “He said ‘I’m not offering a seventh grader. I won’t do it.’ “Then he had a phone conversation with Saige and he said he had to. He said, ‘She was so mature and I wanted her to know that we truly care about her and we wanted her. It’s unfortunate that we had to do it that young, but if we didn’t she might think we don’t value her.’”

Saige Damrow admits she didn’t quite know what to make of it when she received her first scholarship offer from Illinois last year, but she never really felt pressured during the recruiting process and is glad that she had the opportunity to talk with college coaches early on rather than having to wait a few years.

“At first it was kind of crazy,” said Damrow, now 13. “I didn’t understand what it meant. I was extremely excited but at the same time I really didn’t know what was going on. Like, I still really don’t have the full grasp of what it’s going to do for me in my future and how amazing it is. To have these big schools looking at me is just an awesome experience.

“But I think that being able to talk to coaches early is kind of important because if you can’t do it till later you really don’t know what you want because you don’t know if you’re going to get an offer from these schools. You really want to know if you’re good enough for the college you want because you want to know is this school right for me. Do I really want to go there? Can I see myself going there?”

So what is it that had coaches from nearly all the top programs in the country in pursuit of a 12 year-old from small town Wisconsin?

“She’s tenacious and cultured,” he said. “She’s a spitfire and she does everything the coaches ask of her. Probably the biggest compliment I can give her is she moves on from mistakes faster than a lot of people I’ve seen at older ages.

“She has a true passion for the game. You can see it the minute she steps on the court. Your eyes kind of get drawn to her enthusiasm. She doesn’t have fear. She’s very quick and athletic and she has great touch on the ball but I think the thing that separates her is the way she handles herself on the court. That’s what I see as a coach, not as a father.”

Saige, whose sister Autumn was a setter at Minnesota State, has been hooked on volleyball from an early age. She’s began hanging around the gym with her dad and sister as a 3 year-old.

“When she was 5 and 6 years old we’d put her on a wrestling mat so in case balls would knock her backward she wouldn’t hurt herself,” Brett Damrow said. “She’d be on our varsity court digging balls. So she’s been around it a long time.”

And even when she’s not on the court, she’s been obsessed with volleyball.

“She touches the volleyball at home hundreds of times a night,” Brett said. “When she was 6, 7, 8 years-old she would get up in the morning and go to my mom’s house before school and they would set a broom handle over the top of the couch and a chair and they’d play back and forth with a balloon. There are times I’d have to hide the volleyball and then she’d get a basketball out and start setting with that.”

Saige started playing club volleyball at Milwaukee Sting when she was 8, playing on the 10 year-old team, and has always played up at least one year. Since moving to FC Elite, based in the Appleton area, she has played up two years the past two seasons. As a 12 year-old she was named captain last year on her 15 open team.

Damrow’s teammates when she eventually becomes a Badger are largely a mystery right now. She, of course, becomes the first member of UW’s 2023 recruiting class and the Badgers have yet to receive any commitments for the 2021 or ’22 classes. Barring redshirt years, this year’s incoming freshmen will be gone by the time she arrives in Madison. The 2020 class, which would be seniors when she is a freshman, includes setter M.J. Hammill, middle blocker Devyn Robinson and outside hitter Jade Demps.

Damrow said she is familiar with some of the players the Badgers are recruiting and she is determined to help the team compete at the highest level when she arrives.

And from the start, there was no place she’d rather be doing it than UW.

Highlights from the Badgers season, which ended just short of the Final Four when they lost to Illinois in the Elite Eight.

Badgers' Sarah Dodd will miss 2019 season due to knee injury

Whalen, an outside hitter from Wausau, was plagued by knee problems during her two seasons in the UW program.

Middle blockers Dana Rettke and Tionna Williams and setter Sydney Hilley will travel to the national team’s training center in Anaheim, California, for the training March 16-23.

Know your Madisonian: A woman's voice for UW women's sports

Bonnie Oleson, the public address voice of University of Wisconsin women’s sports, recently completed her 20th season as the PA announcer for the UW volleyball team.

Four players who earned All-America honors this season will return for UW.

UW's Sydney Hilley is named to the second team, and Madison Duello earns a spot on the third team.

The next Dana Rettke? 6-8½ Anna Smrek hopes to make a name for herself with Badgers

Smrek, a 15-year-old from Welland, Ontario, committed Thursday to join the UW program as the first member of the 2021 recruiting class.

Jardine, a 6-1½ outside hitter from Pleasant Grove, just south of Salt Lake City, is UW's first recruit from Utah.

I read the article about the volleyball player who has been recruited to UW-Madison at age 13. Good for her.

Barnes, a defensive specialist, plans to appeal to the Big Ten for a waiver so that she will be eligible to play this fall.

The Badgers, coming off a 25-7 season in which they advanced to the Elite Eight of the NCAA tournament, will face 11 teams that played in the tournament last year.

Shanahan, a junior middle blocker, departed Wednesday with her UW teammates for a 12-day trip to Europe. And when the rest of the team heads for home from Rome on June 17, she will take off for Japan to join a team of Big Ten players touring that country through June 26.

Saige Damrow started playing club volleyball at Milwaukee Sting when she was 8, playing on the 10 year-old team, and has always played up at least one year. Since moving to FC Elite, based in the Appleton area, she has played up two years the past two seasons. As a 12 year-old she was named captain last year on her 15 open team.

Saige Damrow’s teammates when she eventually becomes a Badger are largely a mystery right now. She, of course, becomes the first member of UW’s 2023 recruiting class and the Badgers have yet to receive any commitments for the 2021 or ’22 classes.