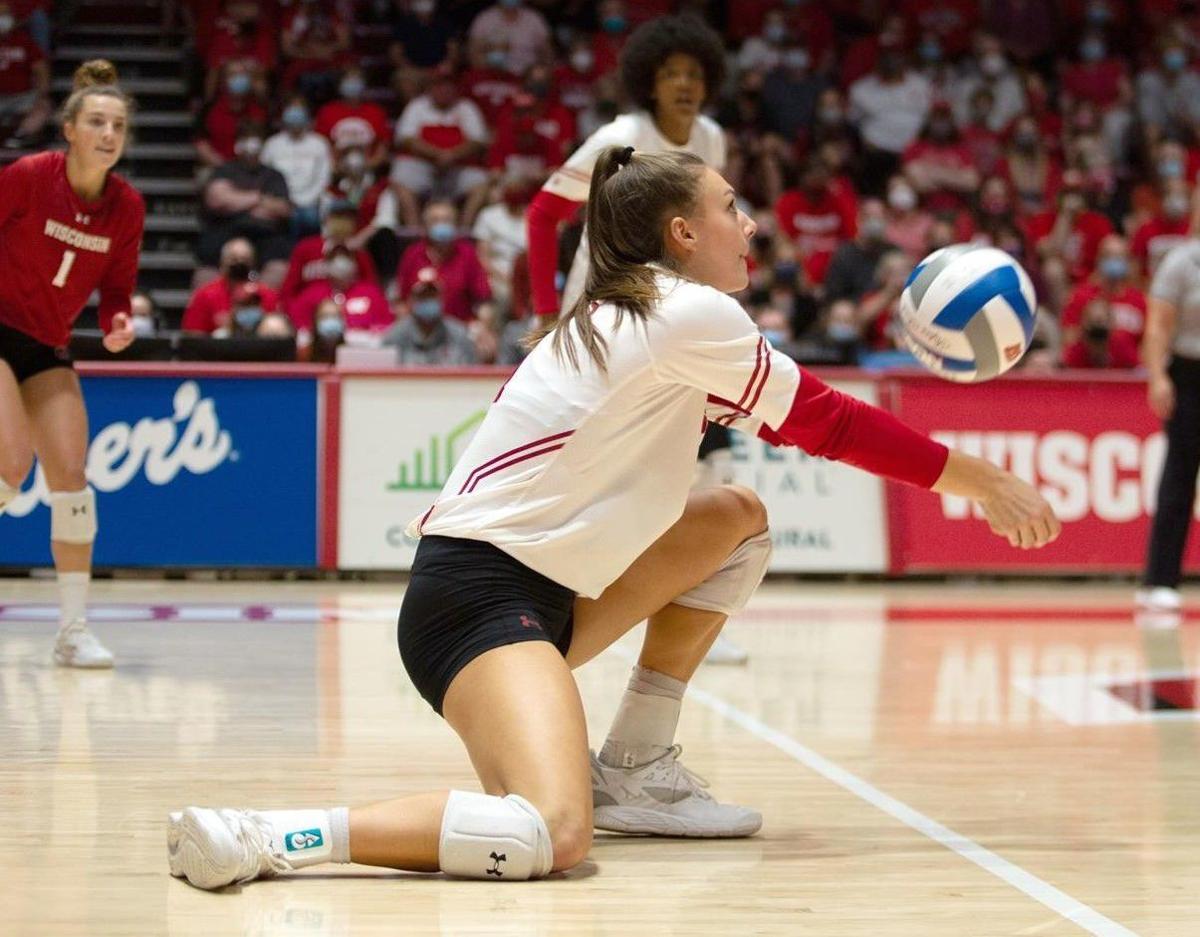 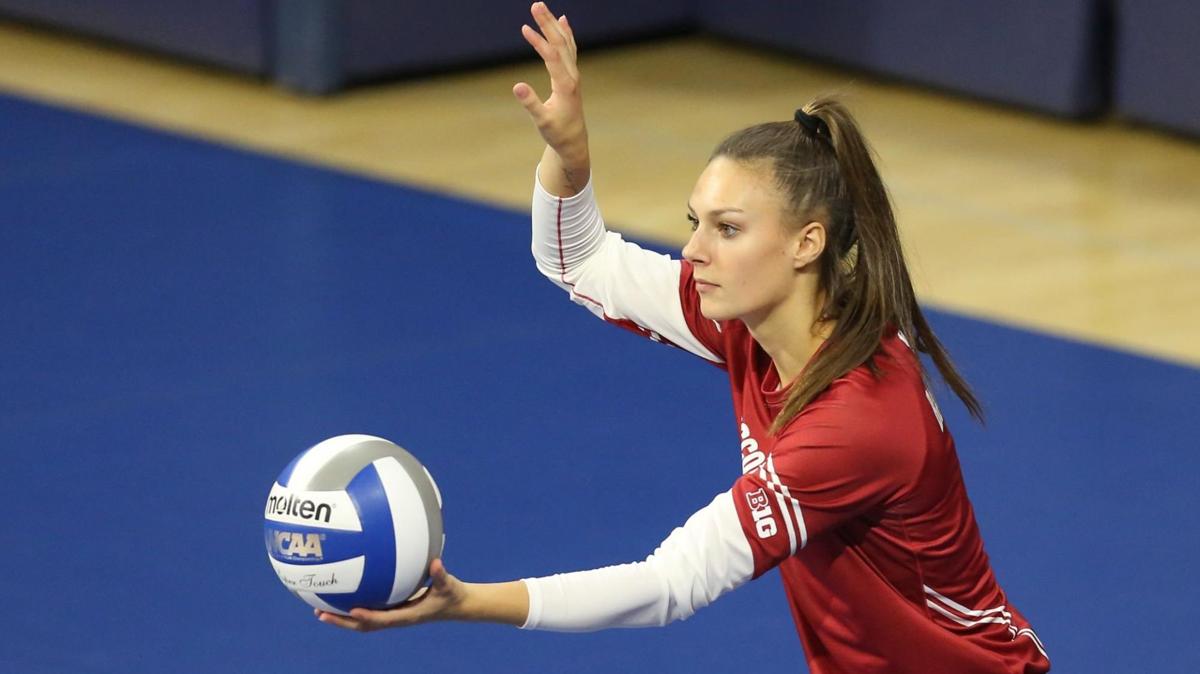 Izzy Ashburn's primary role continues to be putting pressure on the opposition's passers with her serve.

The University of Wisconsin volleyball team was reeling against the dynamic serves of Michigan State’s Biamba Kabengele last week.

Kabengele helped stake the Spartans to a 6-2 lead with a five-point service run, with two of those points coming on easy kills off UW overpasses.

The Badgers rallied to take an 18-13 lead before Kabengele’s next serving turn came around. She quickly put up three more points, the last two coming on aces, one off Grace Loberg and the next off Lauren Barnes.

No. 3 Badgers volleyball team rolls to sweep of Michigan State

Her next serve was targeted at Izzy Ashburn, who just had stepped up into the serve receive pattern following the first ace.

“I would’ve come at me in that same situation,” Ashburn said. “I kind of expected them to serve at me.”

With good reason, considering that Ashburn hadn’t received a serve this season and only had been in position to do so a handful of times. But she responded with a perfect pass to setter Sydney Hilley that led to a kill by Loberg. The Badgers pulled away to win the set on their way to a sweep.

The significance of that play was not lost on her teammates, especially Barnes.

“First thing that went through my head was thank goodness this girl has my back,” Barnes said.

“When she’s pulled into serve receive patterns, I say, ‘Just walk in with confidence, walk in with swagger and they won’t do anything.’ (Kabengele) ended up serving her and she dimed it. That girl is an athlete. She can do it all.”

Ashburn is listed as a setter/defensive specialist on the UW roster, but the 5-foot-11 junior’s biggest contribution over the years has come from her serving. She leads the team with 0.54 aces per set, ranking second in the Big Ten and 12th in the nation.

But the way Ashburn looks at it, a more accurate position listing for her simply would be: athlete. That’s in keeping with a mindset encouraged by coach Kelly Sheffield when he suggested she try to add passing to her repertoire of skills last season.

“Me and Kelly had a talk last year to just be an athlete rather than a specific position,” Ashburn said. “Be a great volleyball player, don’t just focus on being a great setter or just a great DS.

“So I’ve kind of kept that with me and just worked on being a great athlete and not focusing too much on technique and just going out playing the game, having fun and doing what my team needs.”

And she means whatever it needs.

“There’s not a position on the court that Izzy doesn’t think she’s capable of playing,” Sheffield said. “She has the confidence and the moxie to back up some of it. She gives us an awful lot with just her presence.

“If you’re a setter and you’re going to pass in a Big Ten match, the first thing is that you better believe you can do it. So it starts with the confidence that she has. But the kid works. She works on her passing, she works on her digging. She’s in every day before practice working on her serve. She’s in early setting. She works on her craft and all the possibilities that she can impact a match.

“So when you’re throwing her into the serve receive pattern, you know that No. 1, she believes in herself and No. 2, she’s put the work in to be able to handle something that’s coming her way. She’s a unique, special kid.”

National title or bust? Badgers star Dana Rettke on the 'stupidest question' and how she defines success

Ashburn, a setter throughout her career — even at Champlin Park High School in Minnesota, where she was the setter while Hilley played outside hitter — was introduced to passer training during the COVID-interrupted 2020 season.

“I was like, if that’s what we need, that’s what I’m going to do,” Ashburn said. “I started training every day in both setting and passing outside of practice. Then in practice I would be whatever they needed me to be that day.

“I just think that’s a really valuable skill to have. I’ve become a better defender because of working on passing and following the ball. It helps you read the game better.”

Ashburn, who fielded 12 serves without an error in the spring season, continued to work on her passing over the summer. But once the season started, her time has been spent working with the setters on one court while the passers work on the other court for a half hour before the start of practice.

Ashburn’s passing services were not needed until Giorgia Civita was sidelined by a knee injury. But she was ready to answer, even with only limited training, when the call came over the past couple weeks.

“She hasn’t practiced with us all year, except for maybe once or twice,” Barnes said. “It just shows the kind of athlete she is. She can get thrown into anywhere and do an awesome job at it.”

One facet of Ashburn’s athleticism is her speed. It may not show up in matches, but it plays out in practice or warmups where she invariably is first in any drill involving running.

“It’s a competitive thing, but it’s also pushing the people around me,” said Ashburn, who ran the 400-meter dash and 100- and 300-meter hurdles in high school. “Like, I dare you to beat me today. I dare you to run faster than me. It makes them all run faster. I know I’m a quicker runner, a sprinter, and I know if I can bring one or two people along with me every time that I do it, that’s going to make them better and that’s going to make our team better in the long run.”

Ashburn’s primary role, however, continues to be putting pressure on the opposition’s passers with her serve. That’s the skill that earned her court time from the start and an area in which she still is improving. One measure of that is she has more service aces (29) than errors (24) this season for the first time.

“I think I’m a better server than when I came in here,” she said. “I’ve gotten better at thinking good ball after good ball rather than every ball has to be an ace. I’m realizing that consistency would get me there. It’s just finding my cues, like good contact, reaching high for the ball. Good hand contact is going to get the ball to move on the other side and, as a passer, that’s really hard to pass.”

The junior defensive specialist transferred to UW after two seasons with the Hawkeyes, who won eight Big Ten matches during the span.

Danielle Hart was putting up the best numbers of her volleyball career before suffering a season-ending injury in practice this week.

Things are about to get serious for the University of Wisconsin volleyball team as it heads into the toughest portion of its schedule.

UW dominates the fifth set in an extremely tight match.

The Big Ten honors both Dana Rettke and Sydney Hilley after they helped the Badgers sweep their conference volleyball matches over the weekend.

The Badgers volleyball team feared the worst when Giorgia Civita tore her ACL at the end of September. She already is back contributing for the No. 3 Badgers, who face No. 6 Nebraska on Wednesday.

5 things to know about Wednesday's Badgers volleyball match at No. 6 Nebraska

The second half of the Big Ten Conference volleyball season will begin with the biggest match of the season.

Anna Smrek in swing of things as No. 3 Badgers sweep No. 6 Nebraska

The freshman has a career-high 12 kills in a Big Ten volleyball matchup for first place.

UNCUT Madison is a student-run multi-media site where student-athletes share their stories.

The sophomore, who has played sporadically this season, records her first career ace on match point.

Izzy Ashburn's primary role continues to be putting pressure on the opposition's passers with her serve.