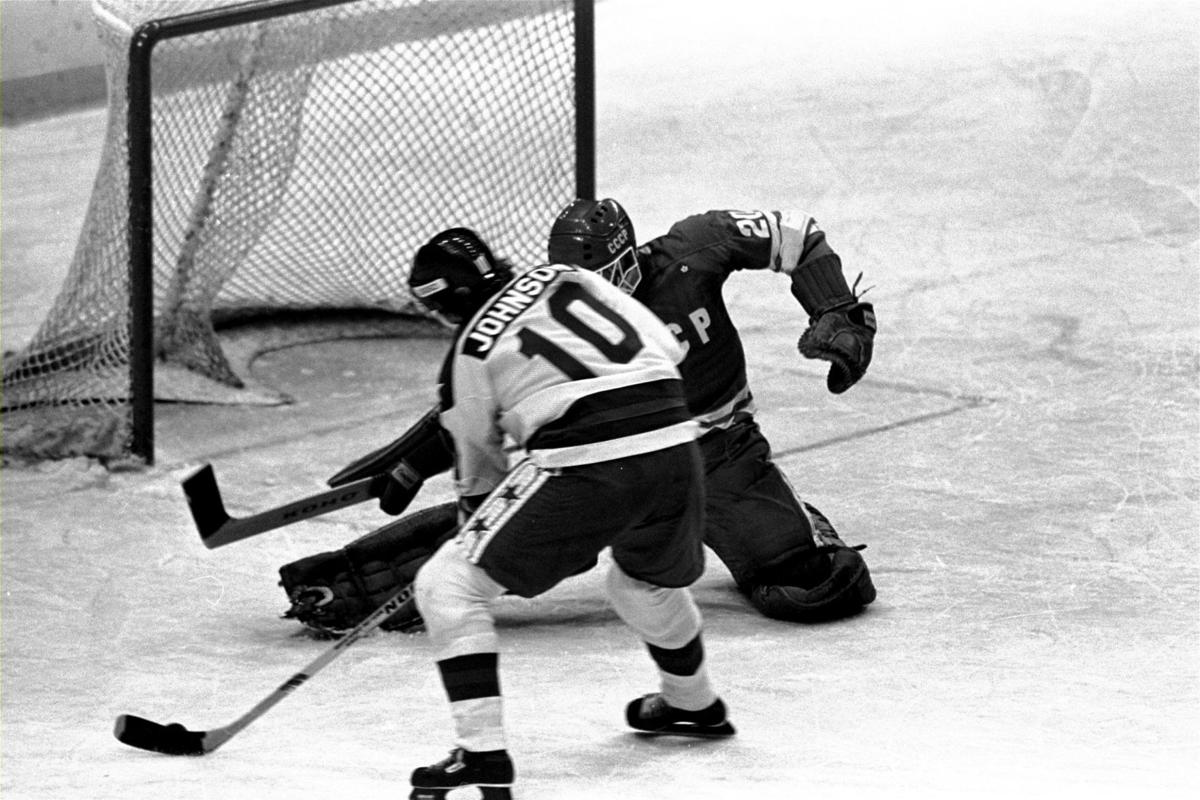 Mark Johnson beats Russian goalie Vladislav Tretjak to score in the first period of Team USA's 4-3 win over the Soviets on Feb. 22, 1980, in Lake Placid, New York. Johnson had two goals in the game. 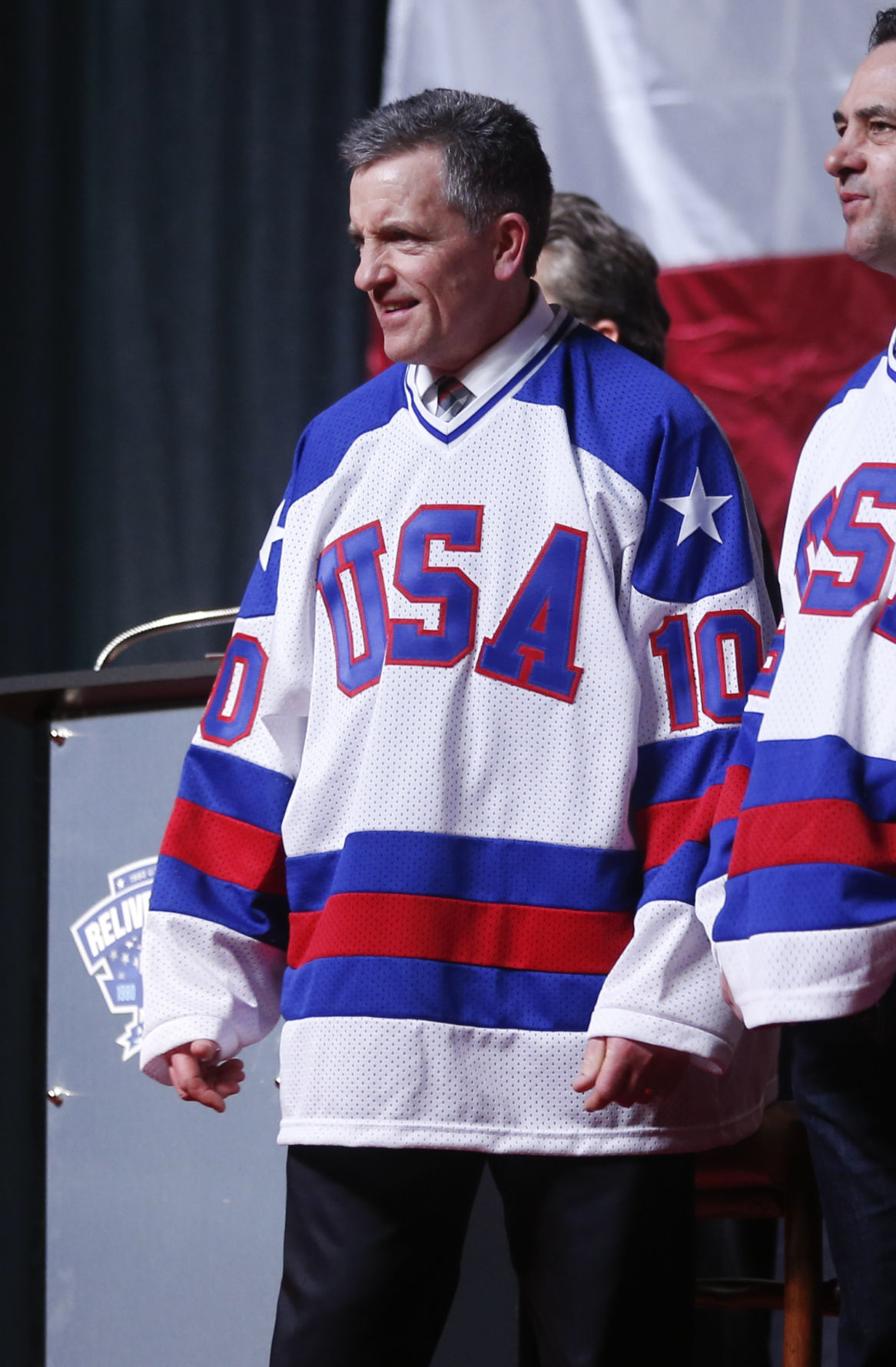 Mark Johnson was part of a "Relive the Miracle" reunion in Lake Placid, New York, in 2015.

One of the sayings that Mark Johnson is fond of using as coach of the University of Wisconsin women’s hockey team is that every game has a story.

With one game, however, that is a dramatic understatement.

Saturday is the 40th anniversary of the United States’ 1980 Olympic hockey triumph over the Soviet Union, a game whose result has produced a shelf full of books, a hastily made TV movie and another Hollywood endeavor that has brought up the current generation of American hockey players.

For as many tales as have been incorporated into those works, however, there’s always more that Johnson and the other members of the Miracle on Ice team are brought into.

The stories that people tell the players about what they were doing when the U.S. beat the Soviets in 1980 and why it meant so much to them have woven their way into the event’s fabric.

“The excitement and the energy as they tell it to you,” Johnson said, “it’s priceless.”

One such story has stuck with Johnson more than others. As he recalls it, a group of people pulled off the interstate under a bridge during a rainstorm to listen to the last minutes of the game.

“The game ends, and complete strangers who are just going wherever they’re going are hugging in the middle of the highway,” Johnson said.

Johnson described it as a link of friendship between two people who don’t know each other. That’s what the Miracle on Ice is, 40 years later.

He’s selective about the stories he tells from those days, especially when the topic is his own involvement as the team’s leading scorer. With a job to do at the helm of a Badgers team that’s chasing a sixth NCAA title under his watch, Johnson declined some media requests to talk about the 1980 Olympics in recent weeks.

But once he gets going, like he did at his weekly news conference Monday, the memories come flowing out:

Photos: Looking back at U.S. Hockey's 'Miracle on Ice'

Heiden’s sister, Beth, won bronze in the 3,000 meters as part of a six-person speedskating contingent from Madison that also included Mary and Sarah Docter, Dan Immerfall and Peter Mueller.

A gathering of most of the players from the 1980 hockey team is taking place in Las Vegas this weekend. Johnson was scheduled to attend, but he went in a different direction to remain behind the bench with the Badgers at Minnesota-Duluth.

“My main focus is to get the group ready to play,” he said.

If the Olympics become a topic of discussion, it probably won’t be by Johnson’s choice. Badgers senior captain Mekenzie Steffen said the coach has never brought up his two goals against the Soviet Union, his game-clinching, short-handed score against Finland or anything else involving his experience in Lake Placid during her four years with UW.

“I wish he would brag about himself, but he doesn’t,” Steffen said. “We would love to hear about it.”

40 years later: Looking back on the Badgers hosting the 1980 U.S. Olympic hockey team

When the Summer Olympics begin in Tokyo in July, viewers will be able to watch every event either live or on demand. That wasn't the case in 1980.

The miracle hockey victory over the Soviets was shown on tape delay because the game started at 5 p.m. East Coast time.

Today, that would be unthinkable.

“If you go back to what happened, cable TV is in its infancy, no internet, no national newspaper, no social media, none of what we have today,” said Al Michaels, who called the game. “So you could truly keep a lot of people in the dark as to what the result was.”

Sophie Shirley and Abby Roque score goals in the final minute of regulation for the Badgers, who tied No. 9 Minnesota Duluth and claimed there eighth regular-season championship.

Watts recorded her sixth series of at least six points with two goals and four points against Minnesota Duluth.

Mark Johnson beats Russian goalie Vladislav Tretjak to score in the first period of Team USA's 4-3 win over the Soviets on Feb. 22, 1980, in Lake Placid, New York. Johnson had two goals in the game.

Mark Johnson was part of a "Relive the Miracle" reunion in Lake Placid, New York, in 2015. 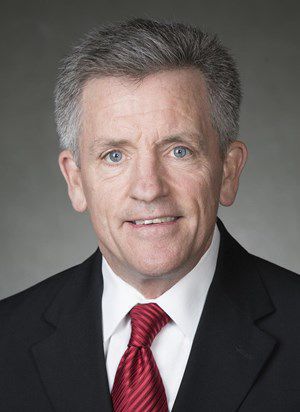