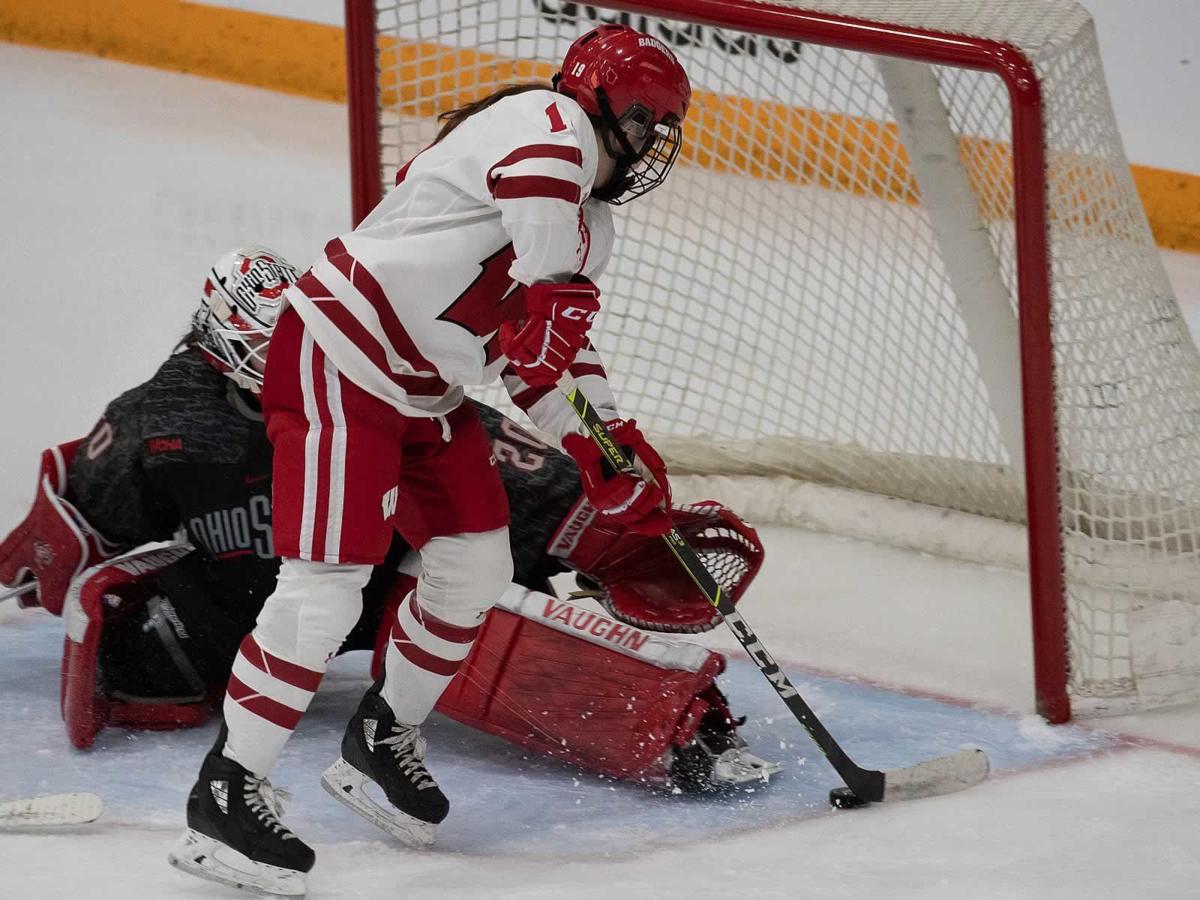 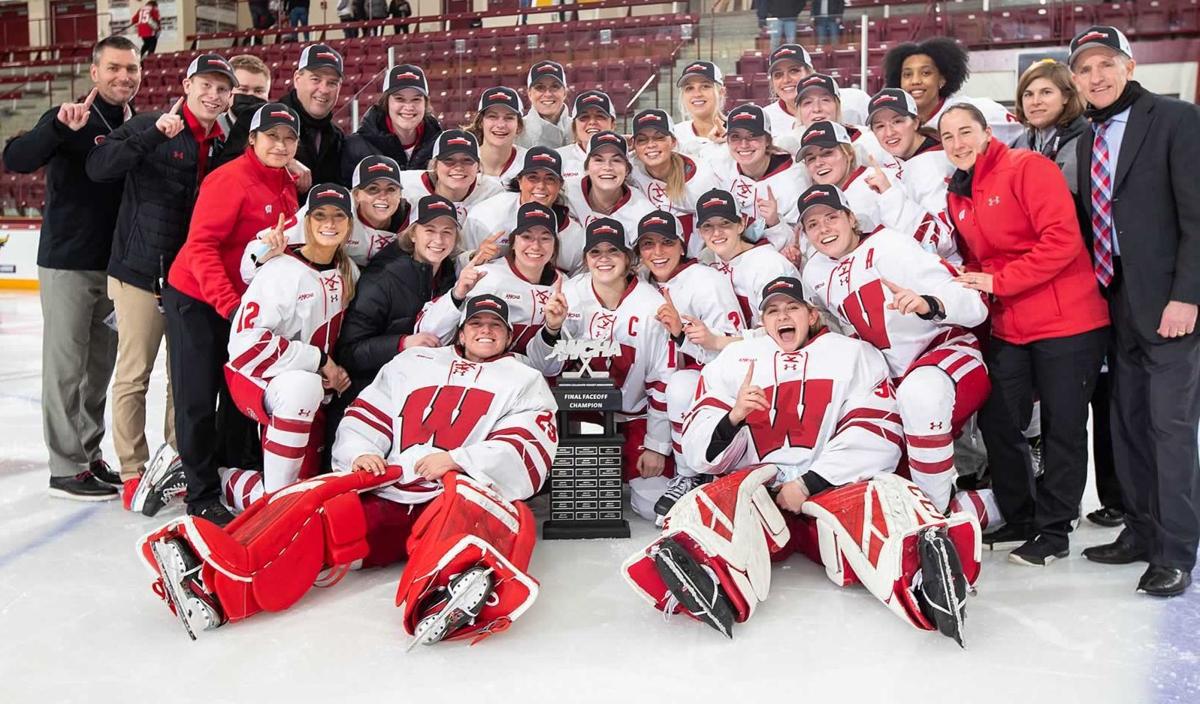 The Badgers pose with the WCHA Final Faceoff championship trophy at Ridder Arena in Minneapolis. 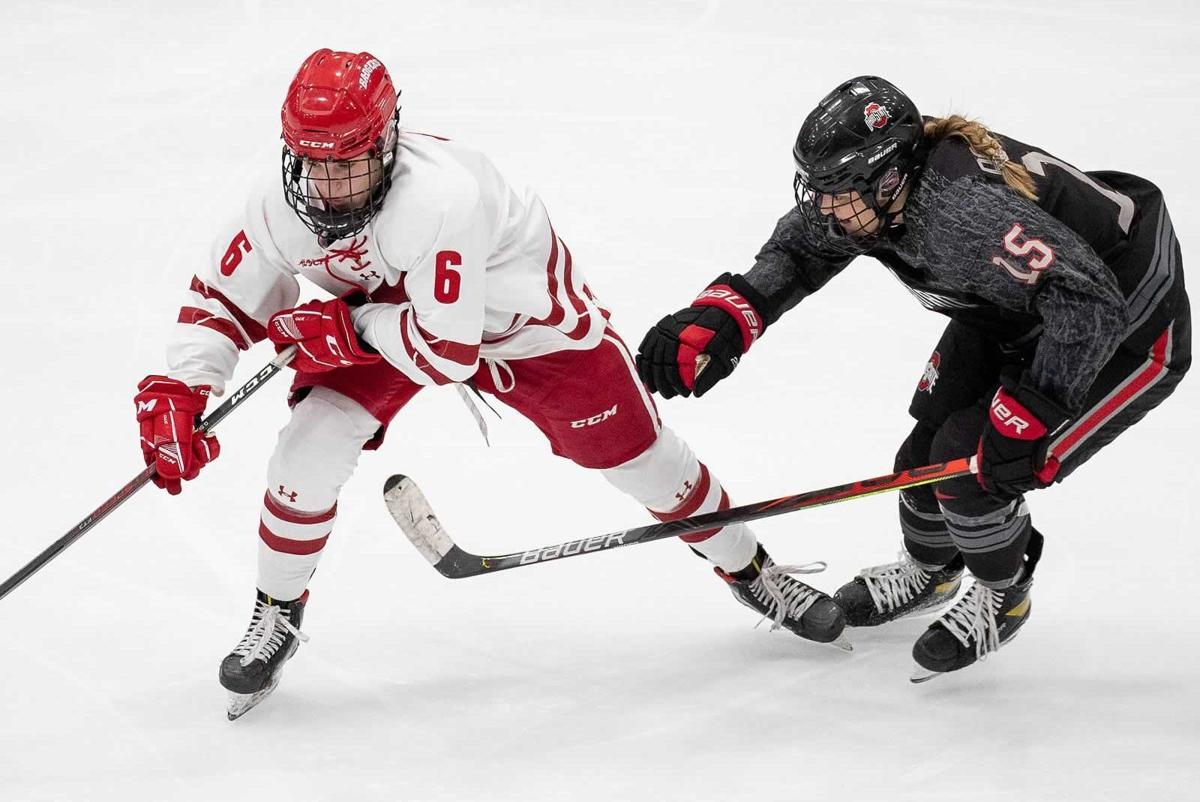 The situations don’t get much bigger than the one Lacey Eden faced in the first minute of overtime Sunday. Nor do the quick decisions.

The University of Wisconsin freshman had Daryl Watts, the NCAA’s leading goal-scorer who already had scored twice Sunday, to her left after she got the puck on her stick in the slot.

Pass or shoot? Eden thought she saw the defender and goaltender in front of her cheating toward a pass to Watts so she chose the latter.

Show us a better shot, we'll wait ⌛@lacey_eden locks in the win for the #Badgers in OT of the @WCHA_WHockey Final Faceoff championship game!!!#OnWisconsin pic.twitter.com/D26Re3EDtM

The second-ranked Badgers added their ninth Western Collegiate Hockey Association playoff championship to their regular-season crown by defeating No. 3 Ohio State 3-2 on Eden’s shot into the top right corner.

It took just 42 seconds into overtime in Minneapolis for the winner, which happened after Ohio State’s Tatum Skaggs had a pass go off her skate at the blue line and right to UW’s Delaney Drake.

The Badgers got revenge for an overtime loss to the Buckeyes in last season’s WCHA Final Faceoff championship game.

The Badgers learned later Sunday that they’ll play Providence in the quarterfinals of the NCAA Tournament on Tuesday, March 16. The entire NCAA tournament will be played in Erie, Pennsylvania, finishing March 20.

UW is 6-1-1 all-time against the Friars. The most recent meeting was a UW sweep in San Jose, California, in October 2015.

Eden joined the Badgers in January after originally planning to start this season with Princeton. The Tigers and other Ivy League schools aren’t playing because of the COVID-19 pandemic.

She has scored eight goals and has 15 points in 12 games.

“I couldn’t be happier for her because I’m sure there were some days where there were a lot of questions in her mind and things that were going through her as far as: Was it the right decision?” UW coach Mark Johnson said. “At the end she gets (rewarded) with a real big goal for us.”

Watts, who was named the tournament’s most outstanding player, has scored at least two goals in five of her 18 games this season. That rate is better than her Patty Kazmaier Award-winning freshman season at Boston College in 2017-18.

She put UW (14-3-1) ahead 2-1 in the second period with an impressive solo rush up the left side. She cut to the net and tucked the puck around the left leg of Buckeyes goalie Andrea Braendli (17 saves).

Watts provided a lead earlier in the second period by finishing off a cross-crease pass from Eden that was deflected by a Buckeyes player.

Ohio State (12-6) had answers for both Watts goals. The first was from Jennifer Gardiner. Sophie Jaques beat a screened Kennedy Blair from the left point midway through the second period.

The Badgers got through a stretch of the second period in which they took three penalties in 95 seconds with the game tied 1-1. Blair (18 saves) stopped Tatum Skaggs and Natalie Buchbinder blocked a shot during the Buckeyes’ 5-on-3 power play.

The Badgers, who play Minnesota in a WCHA semifinal Saturday, allowed seven goals in a series last weekend for the first time in more than five years.

Badgers women's hockey team falls out of No. 1 spot in national rankings as postseason starts

Northeastern overtook the Badgers atop the Division I women's poll after UW lost last Friday at Minnesota Duluth.

It's the eighth straight season that the Badgers have made the eight-team field.

Senior defenseman Grace Bowlby says the Badgers have motivation entering the quarterfinals "for the girls that didn't get to come back and play, too."

Daryl Watts has found joy in hockey again, something she said was lacking two years ago when she decided to transfer away from Boston College.

The Badgers pose with the WCHA Final Faceoff championship trophy at Ridder Arena in Minneapolis.