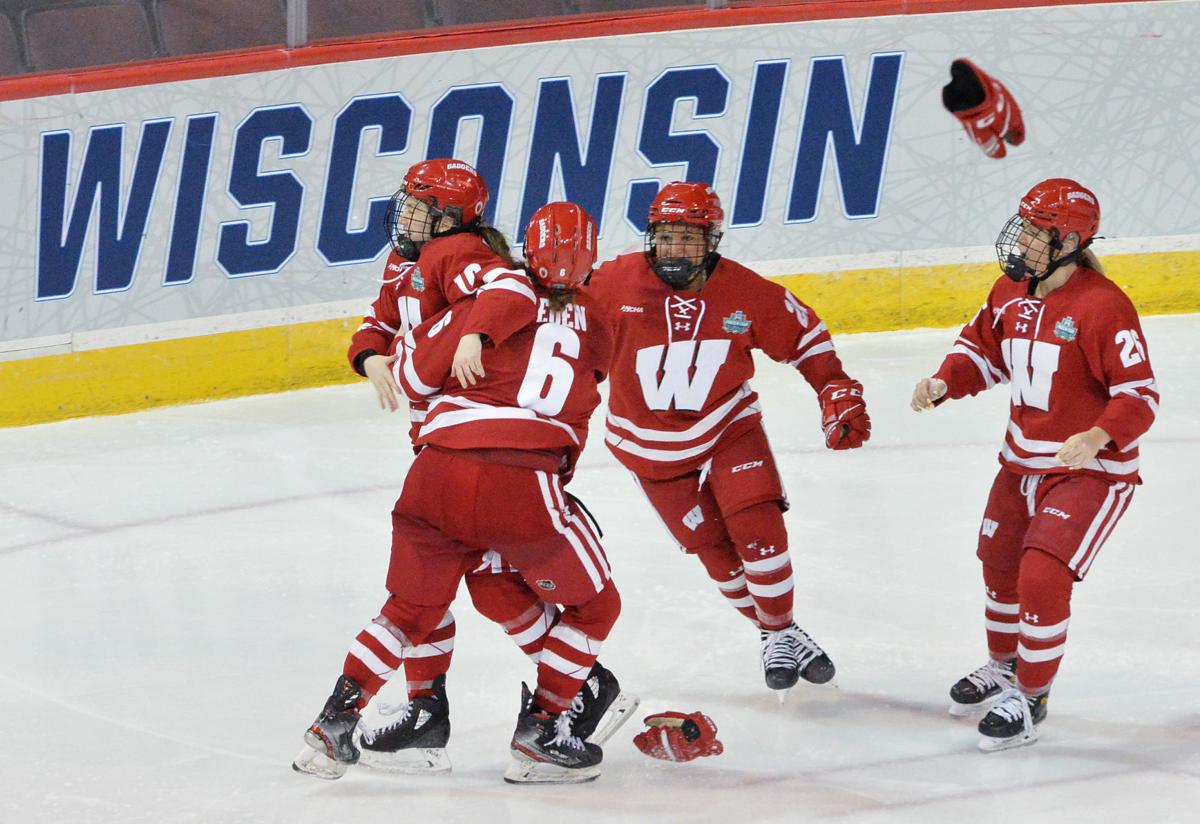 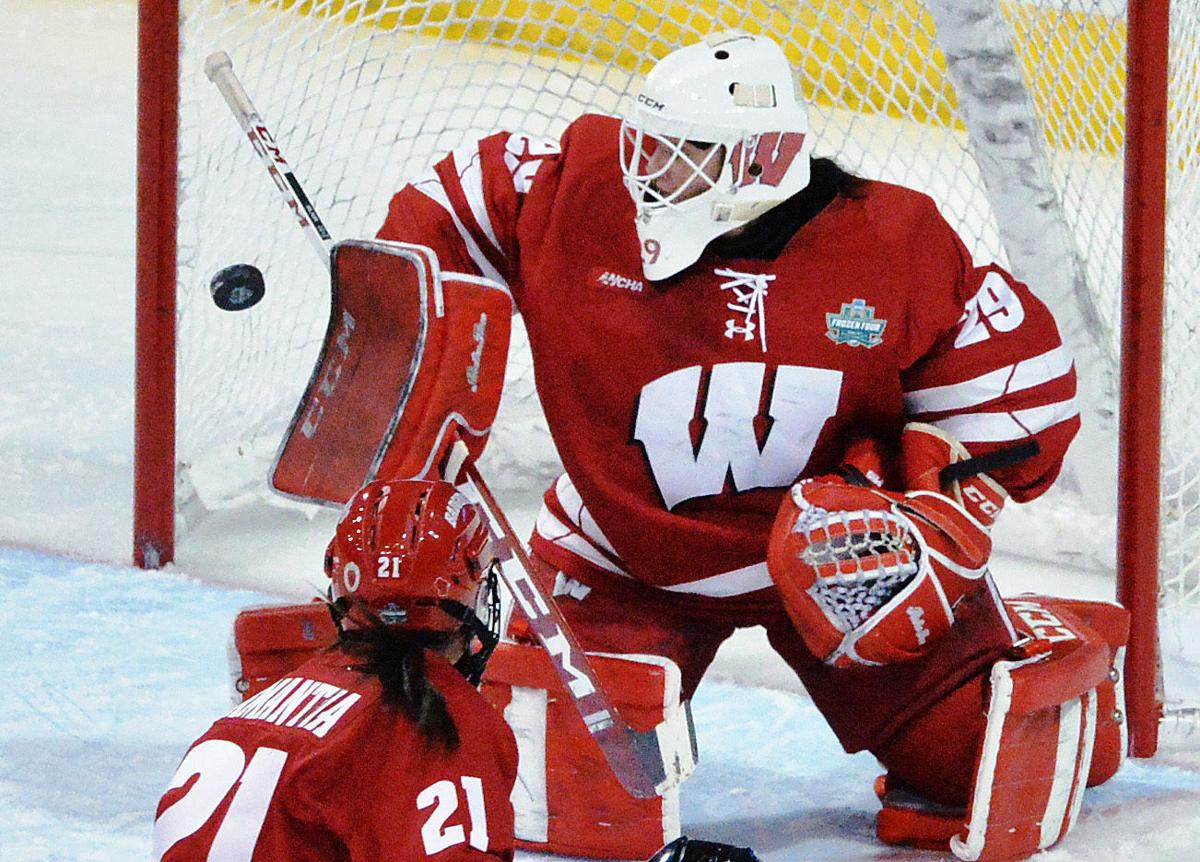 UW's Kennedy Blair makes one of her 24 saves against Northeastern. 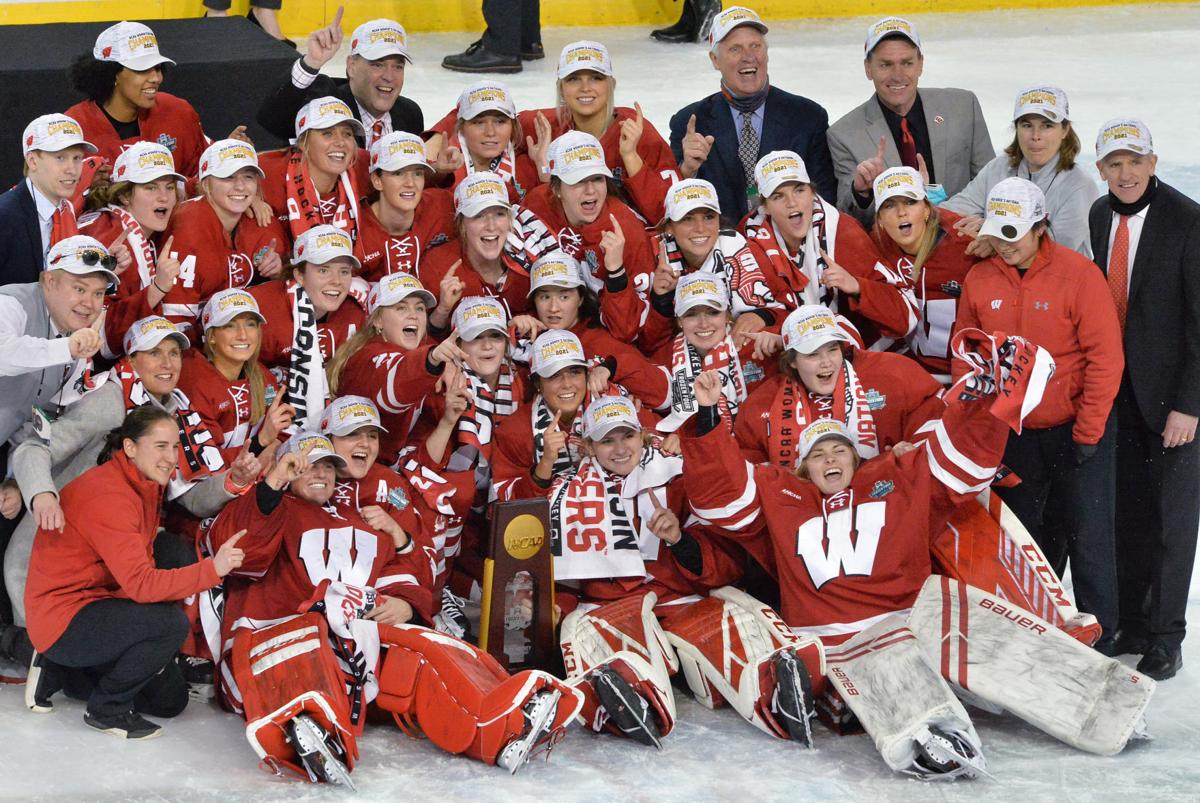 The Badgers pose for the team photo with the NCAA championship trophy. 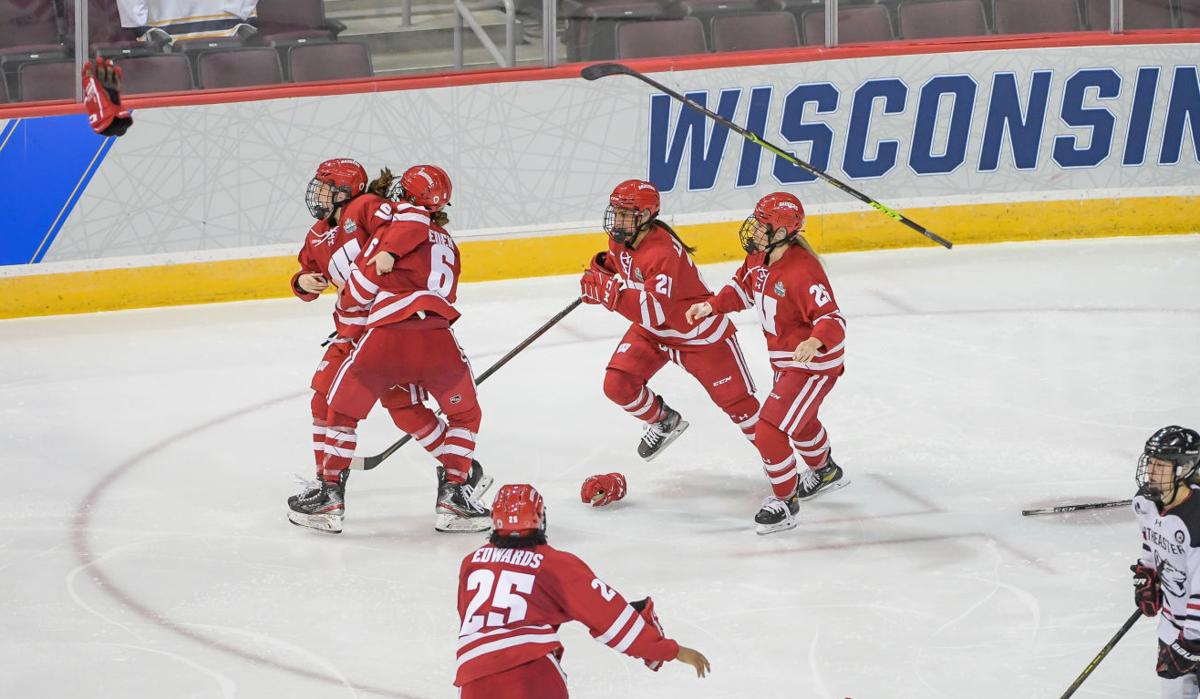 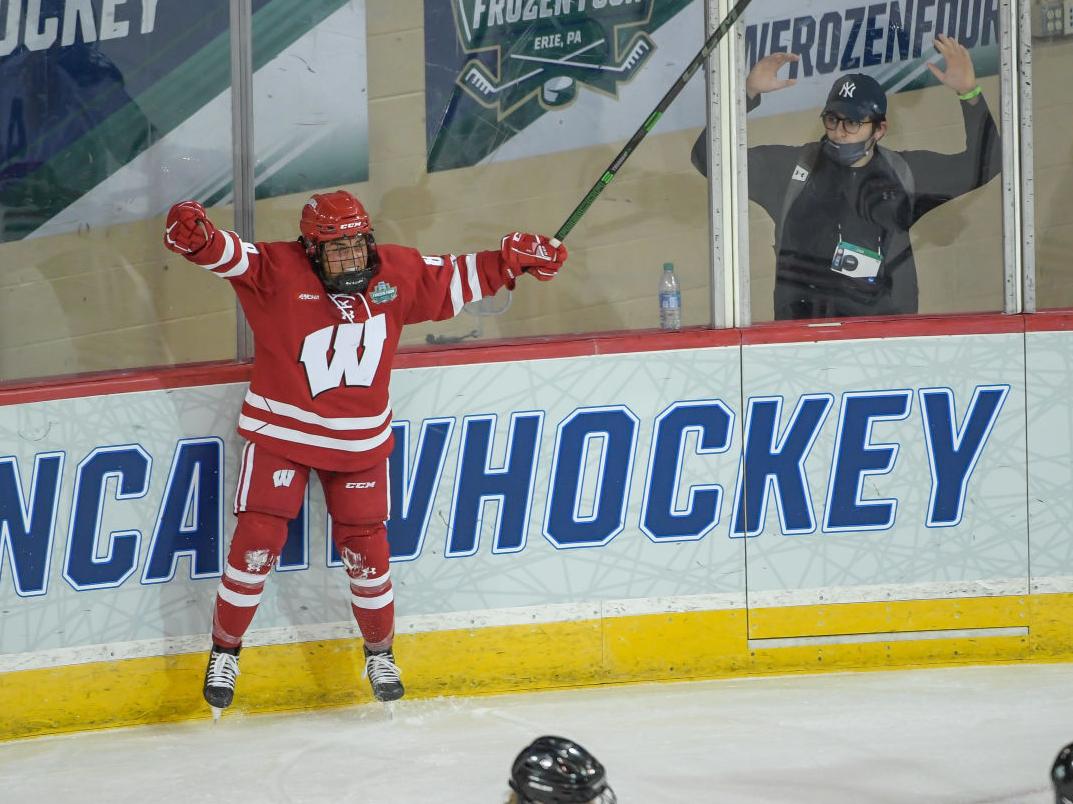 Makenna Webster celebrates her third-period goal for the Badgers against Northeastern. 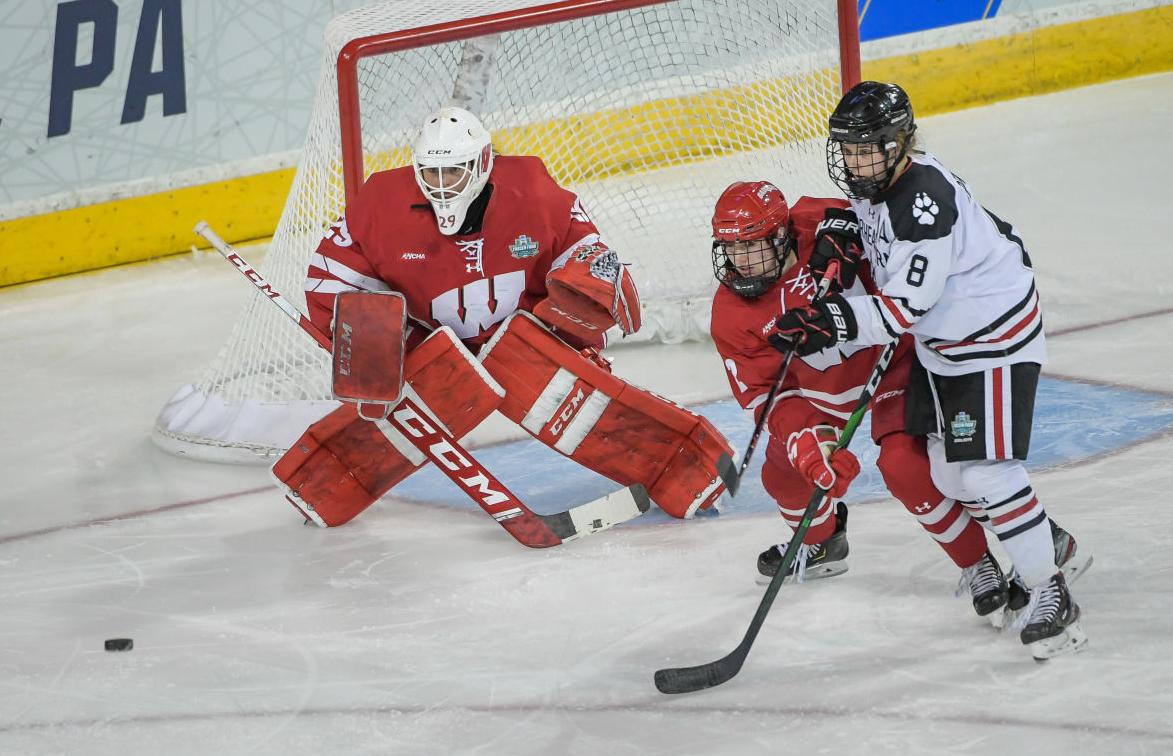 Because of it, an unusual season for the University of Wisconsin women’s hockey team had a familiar finish.

Make room for a sixth NCAA championship banner in LaBahn Arena. Watts scored a stunner from behind the net in overtime Saturday, and the Badgers had another title to celebrate.

A 2-1 victory against top seed Northeastern in Erie, Pennsylvania, gave No. 2 UW a tie with Minnesota for the most NCAA crowns.

“This is an unbelievable feeling,” Watts said. “I’m so happy for my teammates. I’m just so happy to share this moment with them and with my coaches, with my family. It’s an incredible moment.”

The Badgers had never needed overtime to win a national championship before, but this one fit in with a recent pattern. They won the Western Collegiate Hockey Association regular-season and playoff titles with overtime goals by Watts and freshman Lacey Eden, respectively.

Watts made it 3-for-3 by making the only play she could from a nearly impossible position.

She stopped behind the net with the puck and had a second to consider the situation. She threw it out front, trying to bank it in off goaltender Aerin Frankel’s left side. Instead, it hit Northeastern defender Megan Carter and rebounded into the net.

Watts, the senior Patty Kazmaier Award finalist who ended the season with an NCAA-best 19th goal, was informed afterward that it didn’t go exactly as she planned.

When UW missed six games in December because of a COVID-19 outbreak just after the start of a delayed season, reaching the finish line wasn’t a guarantee.

Not only did the Badgers get there, they surged through the tape for a second NCAA title in as many tournaments. They won in 2019; the 2020 event was canceled because of the pandemic.

This one was the most difficult and most exhausting of coach Mark Johnson’s six championships, he said.

“I’m really excited for our players because they were challenged,” he said. “They had lots of adversity both on and off the ice. Every time we were challenged we responded in a positive way.”

Johnson broke a tie with Shannon Miller, formerly of Minnesota Duluth, with his sixth NCAA championship as a coach. He also won a title as a Badgers player in 1977.

Northeastern’s winning streak ended at 18 games. The Huskies (22-2-1) lost for the first time in 23 contests.

“I wish it was maybe a better goal that ended that game,” Huskies coach Dave Flint said. “That’s the way it goes and that’s the breaks.”

The teams played 51 minutes scoreless until the Badgers’ third line struck for the fourth time in the Frozen Four. Frozen Four Most Outstanding Player Makenna Webster went hard to the net and put home the rebound of a Casey O’Brien shot off a rush up the left side.

The freshmen both scored in Thursday’s 4-2 semifinal victory against Ohio State.

The lead lasted only 39 seconds, however. Northeastern’s top line responded when Chloé Aurard slapped a drop pass past UW’s Kennedy Blair’s glove from the left circle.

Blair, a graduate transfer from Mercyhurst in Erie, finished with 24 saves.

Eden had two shots hit the post in the third period. The first deflected off Northeastern’s Carter and bounced onto the right bar. She hit iron cleanly from the left side with 2:35 left in the third.

UW’s Britta Curl was called for cross-checking Aurard away from the play with 5:22 remaining in regulation but the Badgers killed Northeastern’s fourth power play. Chayla Edwards blocked two shots; Grace Bowlby and Eden each blocked one.

“It’s easy to talk about those things but the last couple weeks against good opponents ... you’re just trying to do the little things and not try to do too much,” he said.

The championship game included a record five of the season’s first-team All-Americans: Frankel, defender Skylar Fontaine and forward Alina Mueller for Northeastern; defender Bowlby and forward Watts for the Badgers.

It matched the teams that had occupied the No. 1 spot in the USCHO.com poll for all but one week of the season.

Things started with a physical first period where a handful of collisions didn’t lead to penalties. Both teams had nine shots on goal in the opening 20 minutes but none of them was an exceptional chance.

That changed in the second period. Frankel (35 saves) stopped good looks by Delaney Drake and Watts in the opening 68 seconds.

The goalie denied a breakaway by O’Brien, who left the penalty box after serving time for the team’s too-many-players infraction. O’Brien tried to wait out Frankel but she kept her right pad down for a save.

UW outshot the Huskies 11-6 in the second period. Northeastern had a good look on its first power play but Edwards blocked a Mueller shot.

Badgers co-captain Brette Pettet said Watts has the right combination of skill and confidence to make a play like she did to win the title.

“That’s part of the reason she’s so good: She’s not afraid to make mistakes,” Pettet said. “She enjoys the game and just goes out there and has fun with it. When you’re playing like that mixed with just pure talent like she has, it’s a good recipe. I’m definitely glad she tried to do something like that. It worked out and I’m very happy for her.”

Watts transferred to UW in 2019 looking for a chance to win a national championship. The pandemic denied her last year but she gave the Badgers the trophy Saturday.

“We’ve worked so hard for this,” Watts said. “We’ve worked for the past two years and for some of us this is our first national championship. It’s what we’ve been working on since we started playing hockey.”

A caravan of emergency vehicles from around the Madison area escorted the UW women's hockey team's bus back to LaBahn Arena after the Badgers won their sixth NCAA championship with a 2-1 overtime victory against Northeastern on Saturday night.

The women's team finished No. 1 after winning its sixth NCAA championship, while the men's team goes into the national tournament at No. 4.

Daryl Watts, who led NCAA women's hockey with 19 goals, transferred to UW in 2019 after winning the Patty Kazmaier Award as a Boston College freshman in 2018.

Madison-born Kendra Nealey is planning to join the Badgers' defensive corps next season but Teagan Grant and Dara Greig have entered the NCAA transfer portal.

Daryl Watts was the national player of the month for March and Makenna Webster was the top rookie in awards handed out Wednesday by the Hockey Commissioners Association.

Cole Caufield and Daryl Watts represented the Badgers in voting for the Big Ten Conference athletes of the year awards that will be announced later this month.

Daryl Watts opens up about Hockey Canada snub, her famous OT goal and why she's pumped for 1 last season with the Badgers

Watts is back with the top-ranked Badgers as the chase of another NCAA title begins, and she's not holding back about experiences with Hockey Canada that she said never made her happy.

UW's Kennedy Blair makes one of her 24 saves against Northeastern.

The Badgers pose for the team photo with the NCAA championship trophy.

Makenna Webster celebrates her third-period goal for the Badgers against Northeastern.