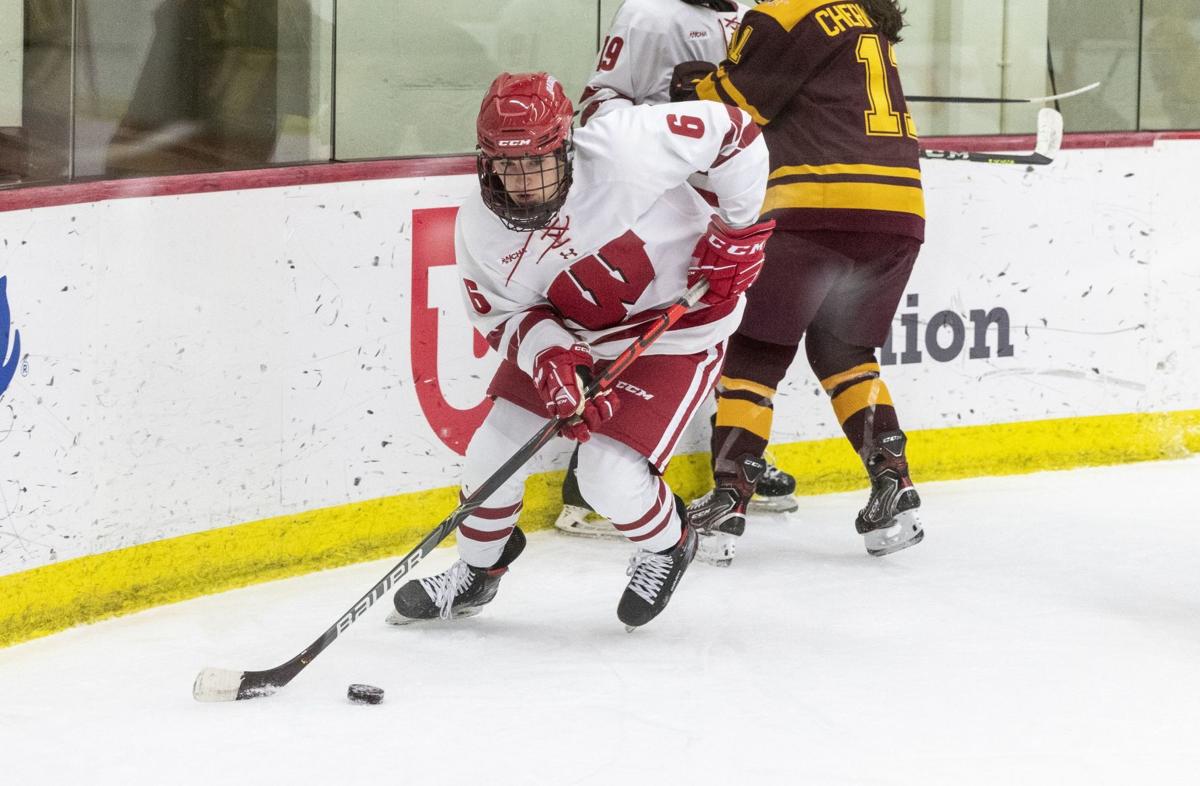 Lacey Eden skates behind the net in her first game with the Badgers on Jan. 15 against Minnesota. She scored her first collegiate goal a day later. 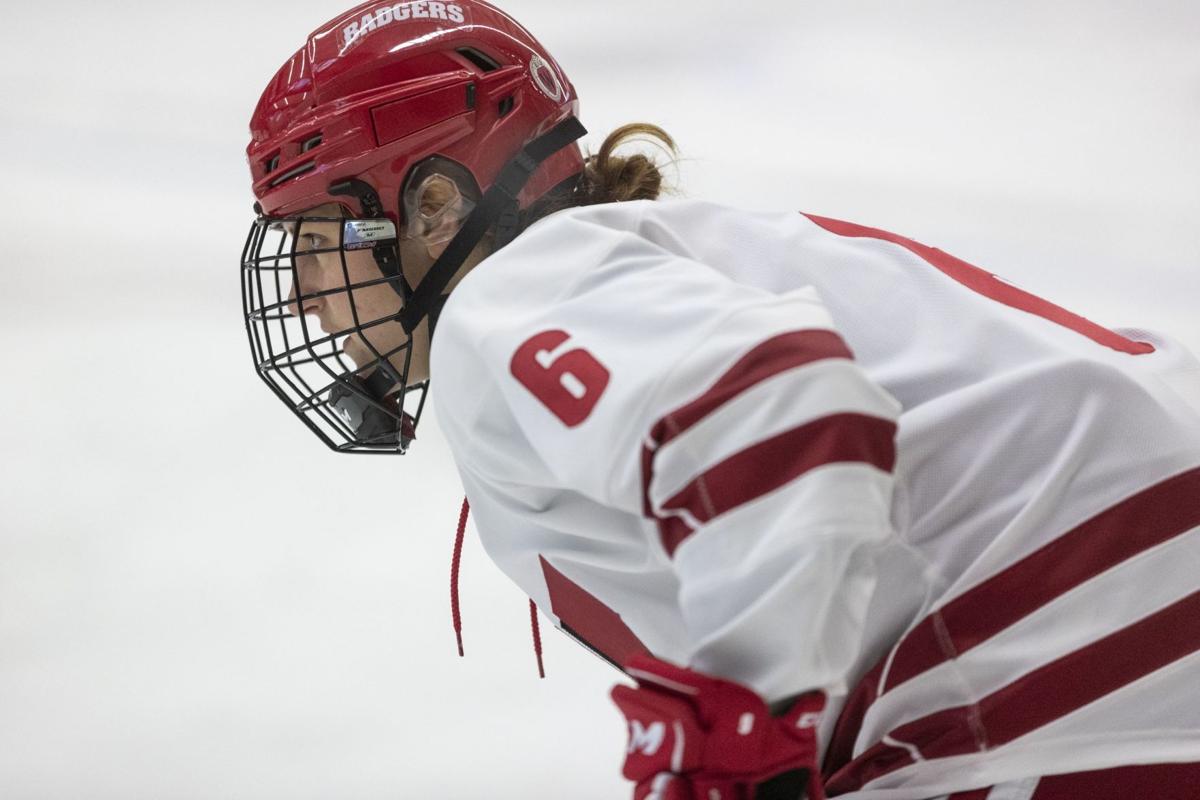 Right wing Lacey Eden recorded 10 shots on goal in her first series with the Badgers.

Lacey Eden was pumping her fists after scoring her first collegiate goal less than a period into her second game.

She wasn’t even living in Madison six days earlier. She hadn’t even been added to the University of Wisconsin women’s hockey roster three days before that Jan. 16 game.

She saw surprise on the faces of her friends who play for Minnesota a day earlier when they saw her on the ice in Badgers colors for warmups.

It had been an overwhelming week for Eden. New teammates to meet. New coaches to understand. A mountain of paperwork to fill out.

Oh, by the way: Eden’s debut in college hockey was the second-ranked Badgers playing the top-ranked Golden Gophers in the most hotly contested rivalry in the sport.

“That just got my energy higher,” Eden said. “Coming into Wisconsin, I knew the rivalry, the Border Battle. Everyone knows the rivalry in women’s hockey. The entire team, the energy was just so high and that helped me hop right on their backs and roll with it.”

Since joining UW, she has scored three goals in four games, the first helping with a sweep of Minnesota and the last breaking a tie in the final two minutes last Saturday at St. Cloud State.

Eden’s introduction to the Badgers involved a series of steps that started two months ago but was confirmed publicly only Jan. 14, the day before the start of the series against the Gophers.

Eden, an 18-year-old forward, planned to play for Princeton this season. COVID-19 got in the way.

The Tigers were one of six Ivy League hockey teams whose season was canceled by the multi-sport conference because of the pandemic.

While she was continuing her offseason training with skills coach Russell Smith near her home in Annapolis, Maryland, Eden also was considering how she could play elsewhere this season. UW, which she considered before she committed to Princeton, went to the front of the line.

Eden was a highly recruited prospect out of Shattuck-St. Mary’s prep school in Minnesota who played for the U.S. in the Under-18 World Championships in 2019 and 2020. She appeared in exhibition games with the Professional Women’s Hockey Players Association last fall.

A plan emerged late in 2020 for her to join the Badgers, but she didn’t hit submit on her application to UW-Madison until December and had to hope that she’d be admitted for the spring semester. When that went through, she came to Madison on Jan. 11.

She wasn’t able to practice with the Badgers until Jan. 14, the day before the first game against Minnesota, because she had to go through NCAA compliance hurdles along with physical and COVID-19 testing.

“Between our training staff, our doctors, our compliance people, our academic people, we gave them a little bit of work,” UW coach Mark Johnson said. “Everybody was able to put things together.”

Her training in Maryland — on-ice sessions multiple times a day and weight work most days — had her ready to play right away.

“Obviously I would love to have been competing with the team throughout that time,” Eden said. “But I feel like I’m a better player for it and now I’m ready to get after it with Wisconsin.”

There’s no delay for players who transfer between schools in NCAA women’s hockey. But there’s still a sometimes exhaustive process to go through.

Not so with Eden for two reasons:

Despite not having to clear those barriers, Eden was a prisoner of paperwork before she could get on the LaBahn Arena ice.

“I have good grades, so I wasn’t worried about getting in,” she said. “But just the rush of everything and getting on campus and getting everything done, (two weeks ago) was very stressful.”

Things started calming down last week and the top-ranked Badgers (8-2) now are off until playing at No. 2 Minnesota on Feb. 5 and 6.

Eden, who counts a spot on the U.S. Olympic team among her career goals, said she plans to stay with UW instead of turning back to Princeton next season.

It’s one thing to put on a jersey and be on the roster. It’s another to become part of the team, especially midway through a season.

Seeing some familiar faces has helped Eden. She was teammates with Badgers freshmen Casey O’Brien and Makenna Webster at Shattuck and played on the same line with them for a time. They helped introduce Eden to what she called a tight-knit group.

“I feel like this huge weekend (against Minnesota) really helped us mesh as a team and helped me fit into the team culture a little bit,” she said.

Eden stayed in a hotel room with her mother for a few days after getting to Madison. She briefly lived with Webster until she moved into a room with freshman goalie Jane Gervais.

“It was definitely tough at first, but she’s just such a special player,” Webster said. “I think she was what we really needed for the team. And once we had her, she came in, we played against Minnesota and we swept. I think she fits in the team well.”

Johnson wasn’t sure how much he was going to play Eden before the Minnesota series. He had her listed as the 13th forward on the line chart, not part of any of the four groups.

“I didn’t know if it was fair to her to be jumping right out and playing against the No. 1 team in the country,” Johnson said.

The plan was to give Eden a little ice time as the right wing on various lines, then adjust depending on how she handled it. If there were concerns about her being slow to adjust to the college game or tentative on the ice with a new group, she quickly quieted them.

Eden, who scored 48 goals and 111 points in 50 games with Shattuck last season, immediately found her way to the puck and created chances. She unleashed three shots on goal in the opening 15 minutes of the series opener, two more in the second period and hit the post in the third in her college debut.

After she tapped her stick twice on the ice to call for a pass back from Delaney Drake on a give-and-go and put the Badgers ahead 2-0 in the first period of the Jan. 16 game, Eden flashed a wide grin as teammates congratulated her.

Eden, who matched leading scorer Daryl Watts with 10 shots on goal over the two wins against Minnesota, was on the ice with the Badgers protecting a two-goal lead with less than 90 seconds to play in the second game.

She again was involved in a critical late situation a week later, this time in a 2-2 game. Eden parked in front of the net after a turnover to await a pass and found room just inside the right post to bury the puck and put the Badgers ahead of St. Cloud State with 1:17 remaining.

The Western Collegiate Hockey Association named Eden its rookie of the week Tuesday.

“Every time I went out, the stakes were that much higher,” she said. “I just had to perform and keep going. Because of my newness to the team, the coaches don’t really know me, they don’t know how hard I’m going to work every single shift. But I think I proved myself.”

The UW women's hockey team, idle last weekend, stayed No. 1 in the USCHO poll ahead of a series on Friday and Saturday at No. 2 Minnesota.

Senior defenseman Natalie Buchbinder had a torn labrum in her left hip repaired in September and missed the Badgers' first six games.

The Badgers can wrap up their fourth WCHA regular-season title in five years at Minnesota Duluth on the final weekend.

Lacey Eden skates behind the net in her first game with the Badgers on Jan. 15 against Minnesota. She scored her first collegiate goal a day later.

Right wing Lacey Eden recorded 10 shots on goal in her first series with the Badgers. 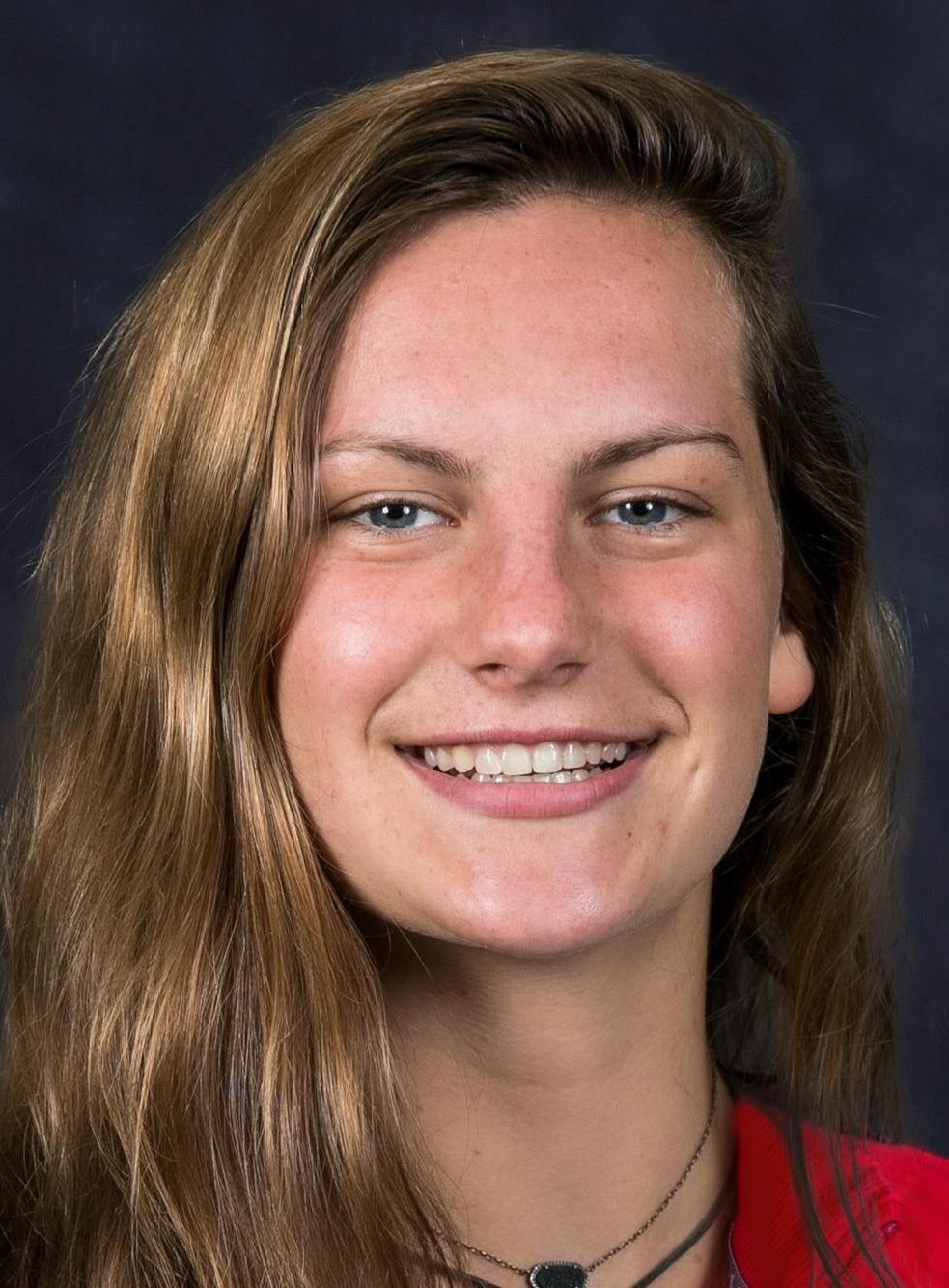