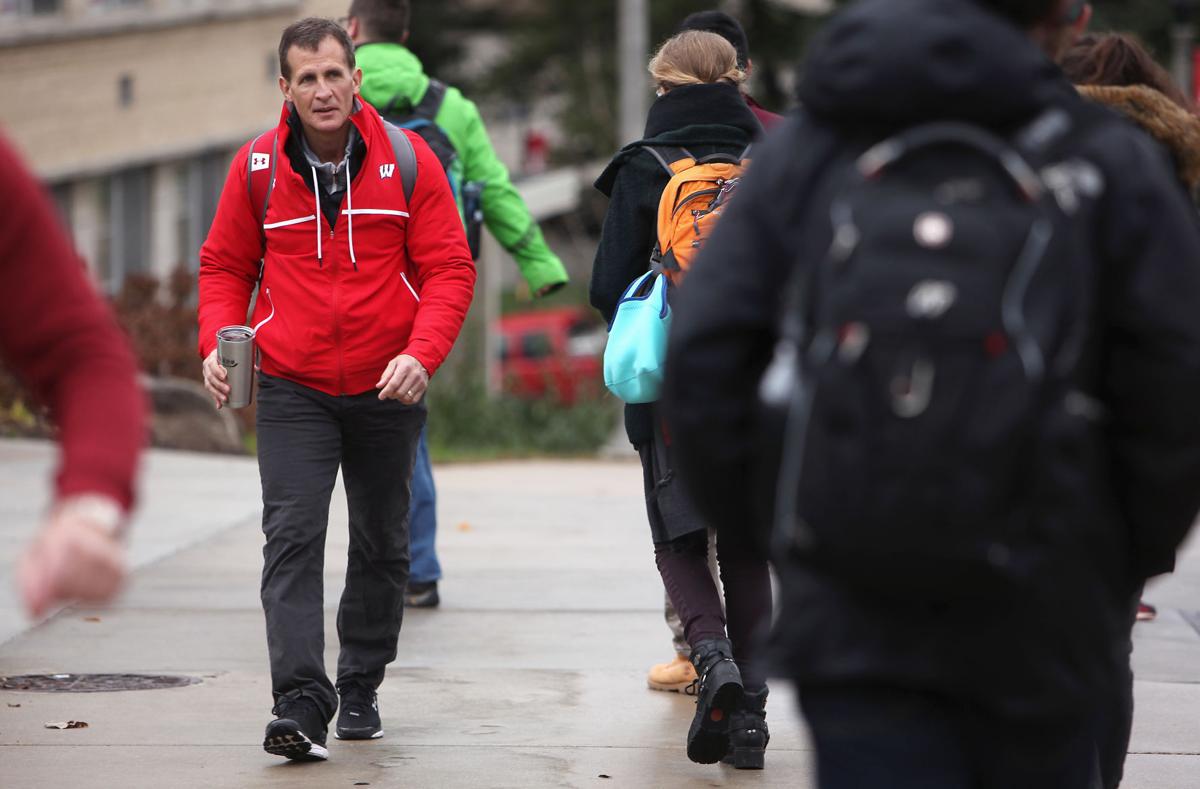 UW hockey coach Tony Granato walks on Observatory Drive after a Thursday morning class as he works toward his bachelor's degree. "As nervous as I was to start, it's fun going to class," he said. 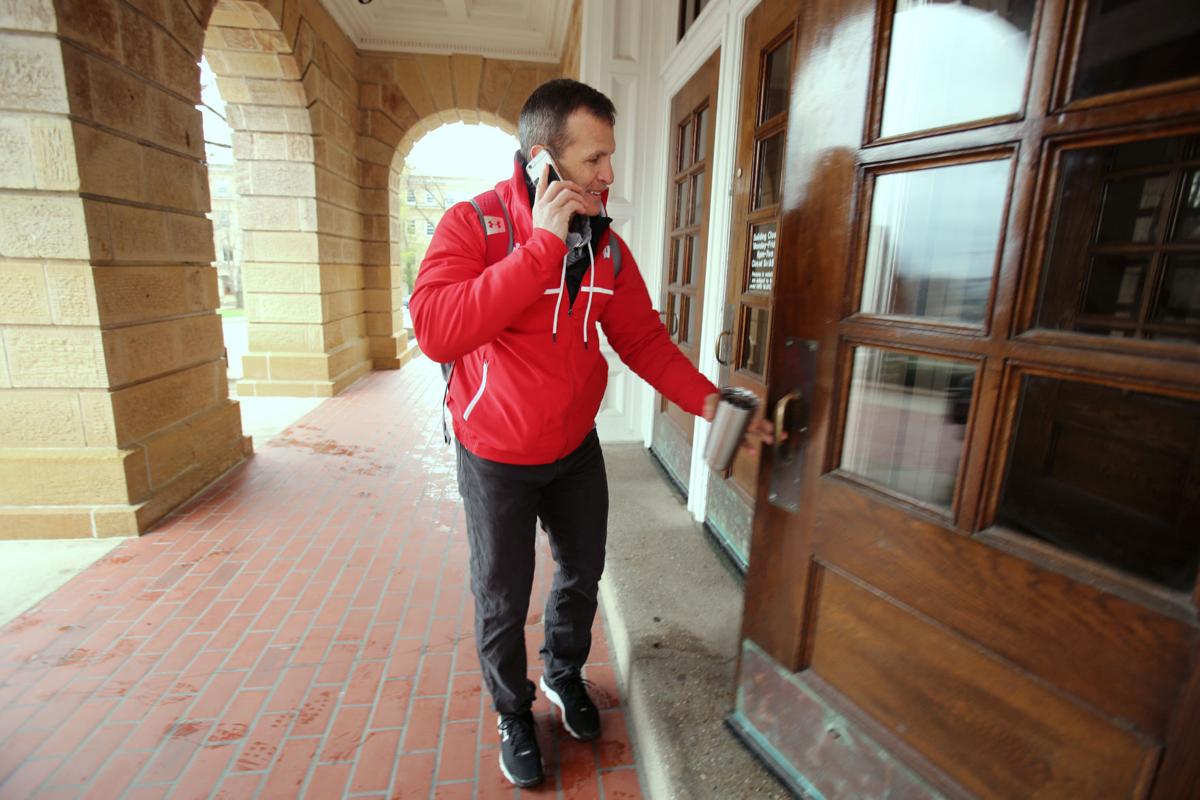 Tony Granato chats on his cellphone as he enters Bascom Hall on the UW-Madison campus. Granato left his schooling unfinished when he wrapped up a four-year playing career for the Badgers in 1987 but has to complete his degree this academic year to coach the team. 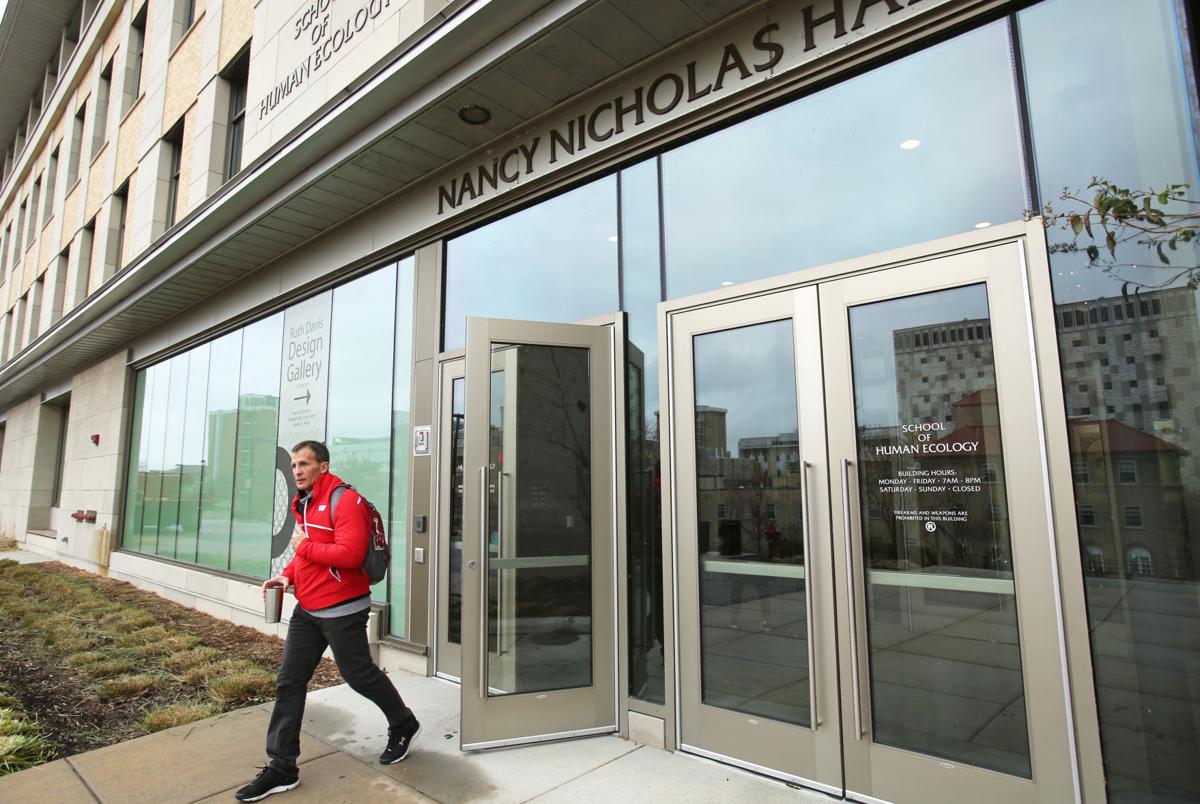 Tony Granato leaves his Racial Ethnic Families in the U.S. at Nancy Nicholas Hall. It's one of two classes he's taking in the fall semester.

Maybe it’s paranoia, but Tony Granato feels like he knows what people think when they hear one of the classes he’s taking to finish his bachelor’s degree is on coaching.

The first-year coach of the University of Wisconsin men’s hockey team, with 13 seasons of pro coaching to his name, is enrolled in a class called “Coaching Athletics”?

Not the case, he said.

“It’s a great class that I need and it’s helping me,” Granato said. “Just like any other student, if they’re going to be in whatever business field they’re in, they’re taking certain classes that will help them. It’s the same thing for me: This is going to help me as a coach.”

After finishing papers for final exams this week, Granato will be one semester and two courses shy of finishing his degree in human development and family studies. That will unquestionably help him as a coach in a tangible way: UW is requiring it.

Granato left school in 1987 after a decorated four-year Badgers playing career without fulfilling all of the requirements for his degree. Then came a professional playing career, a family and employment as a coach at the highest level of his craft and, well, the schooling never got done.

When he returned to Madison last March as the Badgers’ coach, charged with restoring the program to national prominence after two years of a steep dive, he knew he’d have to hit the books again to attain the position requirement of a bachelor’s degree within one year.

What he didn’t know, however, was that there would be a class that would speak so directly to him.

And in the athletics coaching course offered by the Department of Educational Leadership and Policy Analysis, Granato is able to offer the next generation of sports leaders the insight he has gained from a lifetime of coaching and being coached.

“Everyone in this class has just hit a home run by having him in here,” course instructor Peter Miller said.

On one of the few Fridays during the hockey season when Granato wasn’t due to spend the evening standing behind the Badgers’ bench, he arrived more than 10 minutes early for Miller’s 8:30 a.m. class inside the well-decorated Student-Athlete Performance Center on the north side of Camp Randall Stadium.

Granato was due to head to Iowa later in the day to scout a junior hockey game, but his attention was inside the classroom, a blue pen in his hand, scribbling notes into a black-and-white composition book.

The course’s formal title is “Coaching Athletics: A Critical Analysis of Leadership Practice in a Sporting Society,” and on this day the main topic was the socialization of players into a team.

Granato could relate, given not only the transition he’s leading with the Badgers but also the times he had to learn the ropes on a new NHL team.

Before becoming an NHL assistant coach in 2002 — he was elevated to head coach of the Colorado Avalanche three months into his tenure — he played for three NHL teams over 13 seasons.

Miller, a professor who played basketball at Notre Dame and did some high school coaching, explained to students the concept of reality shocks, where the situation with a new group doesn’t match what a player expected.

He asked Granato to share his experience on the subject with the group. Granato offered an anecdote about how new coach Darryl Sutter shook up what he called a “country club atmosphere” when he took over as coach of Granato’s San Jose Sharks in 1997.

“I did that a lot during the semester: I would say something that the research says, and I was like, ‘Is that really true, Tony?’ ” Miller said. “He’s been so good about being honest and thoughtful about it. And not claiming he has all the answers.”

Most of the other students in the three-credit course were significantly younger than the 52-year-old Granato. Some were undergraduates. Some were working toward a master’s degree, including graduate assistants for the UW football team.

To Granato, the teaching and discussion offered an outlet through which he could expand his coaching mind beyond the hockey world.

“There’s some younger coaches and even some kids that are still in school that are getting into coaching that asked, ‘Hey, what would you do in this situation?’ ” he said. “That’s why I like it. Then I can learn something from them because they’re going to tell me what they’re thinking and it might trigger another idea or thought that maybe I missed on.”

Such opportunities don’t come up often in the hockey coaching fraternity.

“It’s pretty hard in our business to be full disclosure on something that might help another program or NHL franchise unless you have a family relationship or a deep friendship,” Granato said. “That’s why I like this class so much.”

UW offered the course for the first time this semester, and it quickly expanded beyond 20- and 30-person caps to where it finally was closed at 35 students.

More than one-third of the grade was based on a book reflection paper. Granato wrote his on former NBA coach Phil Jackson’s “Sacred Hoops” and was able to add some personal observations.

While Granato was playing with San Jose in January 1997, he observed a Chicago Bulls morning shootaround thanks to a teammate’s friendship with Michael Jordan.

What Granato remembered about it was Jackson, on his way to his fifth NBA title, gathering his players around him and speaking about the mental aspect of the game.

“He’s able to say, ‘I read the book and this is my analysis, and by the way when I was hanging out with Phil Jackson, I saw the same thing when I was at the Bulls’ practice with him,’ ” said Miller, who is also a member of the UW Athletic Board. “That’s pretty cool.”

Granato arrived back in Madison last spring after a stint as an assistant coach with the Detroit Red Wings, needing 15 credits to finish his degree. He completed two courses over the summer, then took the coaching class and another, Racial Ethnic Families in the U.S., in the fall semester.

In the latter, an instructor relayed that her father played high school hockey against Granato in the Chicago area in the early 1980s.

Two courses await after the semester break — one in anthropology and another that will be a late determination.

The time demands of lectures, readings and tutoring sessions while he’s also coaching, recruiting and being the public face of the Badgers men’s hockey program don’t offer an easy balance.

“It really doesn’t fit,” Granato said when asked how school works into his schedule.

It’s not uncommon after dark to see one light on in the bank of Kohl Center coaches’ offices as Granato gets in a tutoring session.

“You feel bad for him because he’s doing two jobs,” said Don Granato, Tony’s brother and the Badgers’ associate head coach. “School is work. But he takes it very seriously. He’s in the class and he’s trying to get an A; he’s not trying to just pass. That takes a lot of focus and a lot of energy.”

Tony Granato said he’s a little worn down from the summerlong sprint to get ready for his first season leading the Badgers and the opening 2½ months, which have produced as many victories through 16 games as the team gained in 35 last season (eight).

He credited his brother and associate head coach Mark Osiecki for taking on greater responsibilities in recruiting and practice planning.

“If I came in and had two people with me that I hadn’t worked with or didn’t know personally prior,” he said, “it would have been a great challenge.”

And Granato recognizes that returning to school at 52 wouldn’t have been a requirement if he had seen things through at a younger age. But his on-ice success — he was a two-time All-American and a finalist for the 1987 Hobey Baker Award as college hockey’s top player — offered him opportunities to play beyond college.

After each of his final three seasons at UW, Granato played overseas for the U.S. at hockey’s World Championships. He took a reduced course load those spring semesters.

He enrolled in some summer classes in the years after he left UW, but the degree soon was put on hold.

“Had I finished and done summer school right after just to get it done, I wouldn’t have to do this,” Granato said. “But in the big picture, I’m actually glad it turned out this way. I’m really glad I’m doing this now. As nervous as I was to start, it’s fun going to class.”

Kunin and the U.S. play the first of four preliminary-round games of the tournament for some of the world's best under-20 players on Monday against Latvia.

A weekly update on former UW players in pro hockey.

A weekly look at former Badgers men's hockey players in the pros.

After seeing his daughter graduate in Colorado on Friday, the Badgers coach will return to celebrate the completion of his UW studies, more than 33 years after he started.

Granato joined Jerry York, Dean Blais and Jenny Potter in the Class of 2020.

UW hockey coach Tony Granato walks on Observatory Drive after a Thursday morning class as he works toward his bachelor's degree. "As nervous as I was to start, it's fun going to class," he said.

Tony Granato chats on his cellphone as he enters Bascom Hall on the UW-Madison campus. Granato left his schooling unfinished when he wrapped up a four-year playing career for the Badgers in 1987 but has to complete his degree this academic year to coach the team.

Tony Granato leaves his Racial Ethnic Families in the U.S. at Nancy Nicholas Hall. It's one of two classes he's taking in the fall semester.