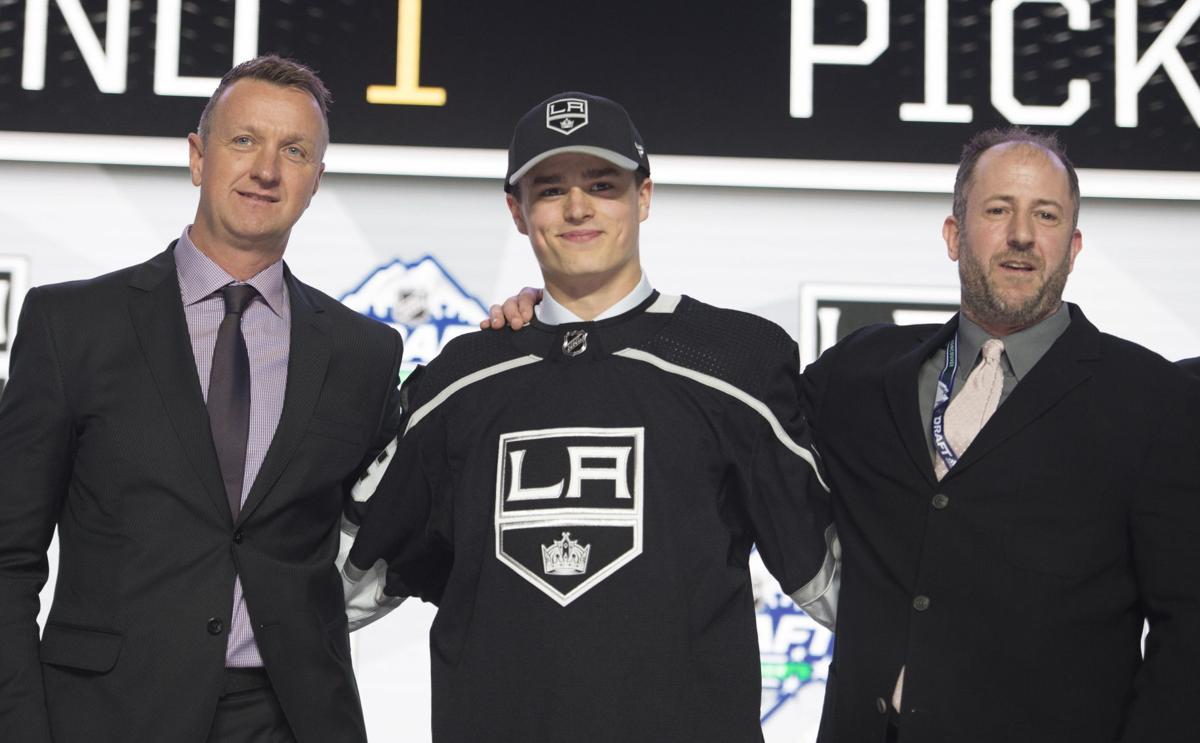 Los Angeles Kings pick Alex Turcotte, center, poses during the first round of the NHL draft at Rogers Arena in Vancouver, British Columbia, on Friday. 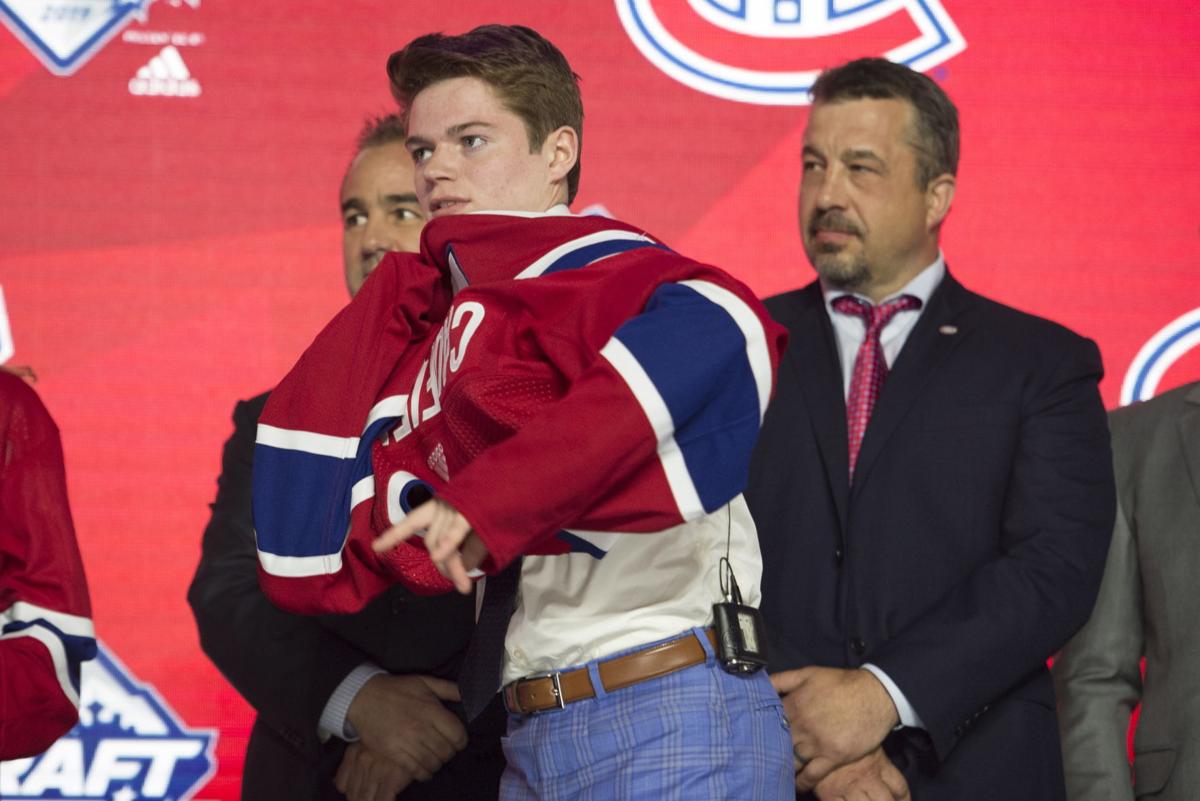 Cole Caufield puts on a Montreal Canadiens jersey during the first round of the NHL draft Friday in Vancouver, British Columbia.

If things go as expected with the University of Wisconsin men’s hockey team, Alex Turcotte and Cole Caufield will have their names linked in a lot of situations over the next 10 months.

The Badgers hope to see them together on the score sheet a lot in the 2019-20 season, when they’re due to be part of a talented freshman class that could kick the team’s rebuilding process into high gear.

A memorable connection came Friday night, when both were first-round picks in the NHL draft.

Turcotte became only the third Badgers player selected in the top five when he went at No. 5 to the Los Angeles Kings.

Caufield had to wait longer than expected, slipping into the middle of the first round to the Montreal Canadiens at No. 15.

It was only the third time the Badgers had multiple players selected in the first round of the same draft, and Turcotte and Caufield became the 14th and 15th UW-connected first-round picks.

“I can’t even believe it,” Turcotte said in a TV interview after he was selected. “I’m at a loss for words, and I’m just so excited. I’m happy they believed in me, and I can’t wait to get started with the L.A. Kings.”

It took longer than expected for Caufield, who had been listed in the top 10 on some draft charts and as the best pure goal-scorer in the draft after a record-setting, 126-goal career with the USA Hockey National Team Development Program.

On Friday, however, he ended up as the seventh player from the NTDP selected.

Caufield’s size — 5-foot-7, 163 pounds — assuredly had something to do with the fall, even in a league where small wingers have become more accepted and more dangerous in recent years.

As the picks went by and Caufield’s name didn’t get called, the TV cameras kept finding him. The wait might be more fuel for his fire.

“Obviously, I’ve had to prove a lot of people wrong,” he said earlier this week. “But I’m only going to continue to keep doing that because I think it’s just in my blood now and it’s something I want to prove to everyone.”

In a TV interview Friday, Caufield added to the discussion about his size. “I don’t think it’s a risk anymore,” he said, “and I don’t think anyone else should, either.”

Turcotte, one of the six from the U.S. Under-18 Team selected before Caufield, joined Dany Heatley (second in 2000) and Kyle Turris (third in 2007) as the Badgers’ top-five picks.

Limited to 37 games for the NTDP last season by injury and illness, he still had 62 points — a 1.68 point-per-game average that was second on the team only to No. 1 overall pick Jack Hughes.

A way of thinking about the draft as it relates to college players is the higher he’s selected, the more the school’s coaches need to worry about losing him before the coming season.

Turcotte, however, said earlier this week that he wants to play the coming season with the Badgers.

“There’s no rush,” Turcotte said. “It’s always going to be there. The life experiences you gain from college, and obviously the hockey’s phenomenal and the training. I don’t think going to college can hurt you, honestly. I think it’s only going to help.”

Turcotte’s father, Alfie, was selected 17th overall by Montreal in 1983 but played only 112 NHL games between the Canadiens, Winnipeg and Washington over eight seasons. He once said he should have stayed in major junior longer to develop for the NHL.

The track is different for father and son, but the message of taking your time has been communicated.

“The game ... you love to play, something dissipates when you become a pro,” Alfie Turcotte said. “Now it’s not for fun. It’s a job. ... Go to Wisconsin and have some fun. It’s pressure-filled to play college hockey, but that’s not a problem for him.”

With 2018 first-round pick K’Andre Miller set to return to the defensive corps in the upcoming season, UW is due to have three first-round picks on its roster for only the third time. The previous instances were consecutive: 2007-08, 2008-09 and 2009-10. The third in the trio included the Badgers’ most recent Frozen Four appearance.

The Vegas Golden Knights picked incoming Badgers forward Ryder Donovan in the fourth round, and Owen Lindmark went to the Florida Panthers in the fifth round.

Los Angeles Kings pick Alex Turcotte, center, poses during the first round of the NHL draft at Rogers Arena in Vancouver, British Columbia, on Friday.

Cole Caufield puts on a Montreal Canadiens jersey during the first round of the NHL draft Friday in Vancouver, British Columbia. 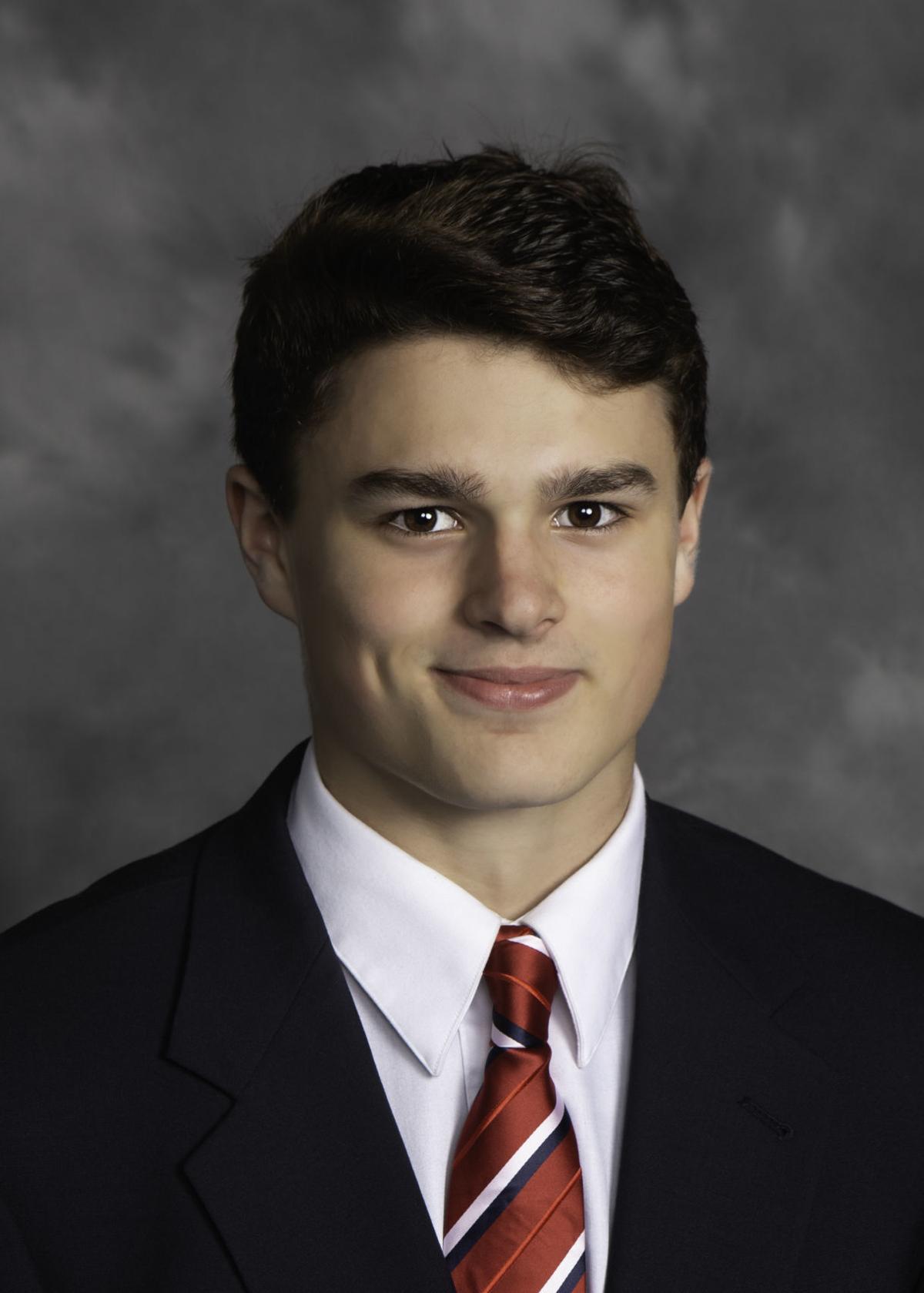