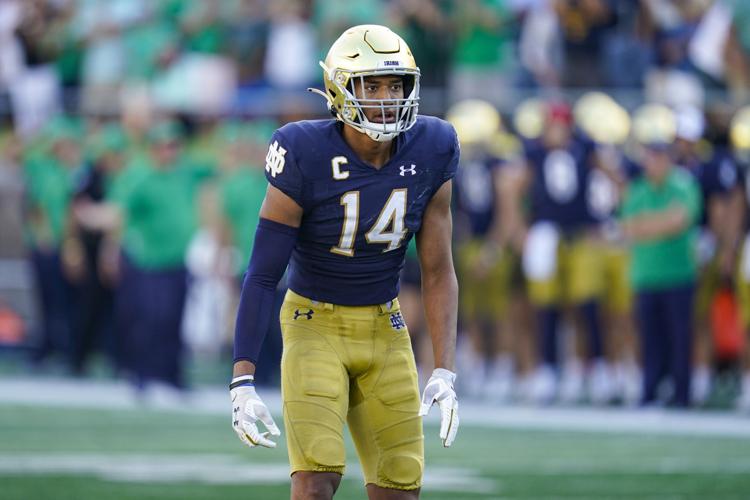 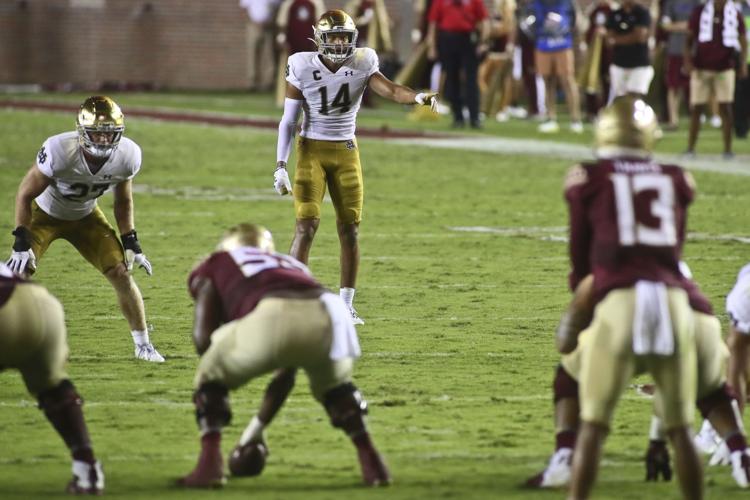 Notre Dame safety Kyle Hamilton signals to a teammate during a game earlier this season in Tallahassee, Fla. 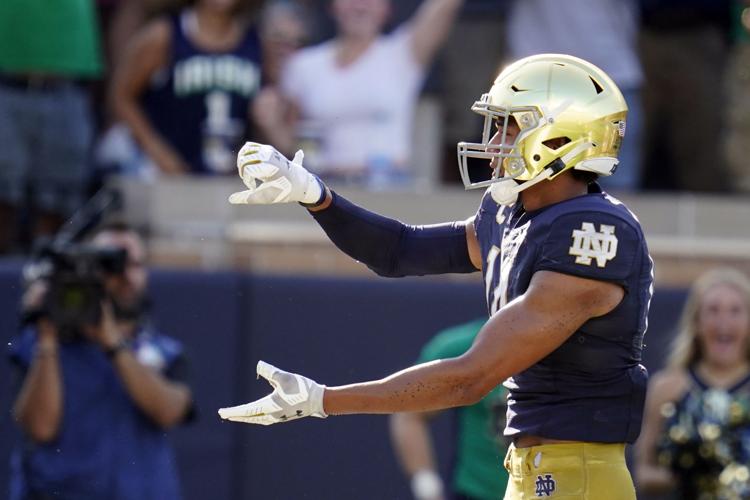 Notre Dame safety Kyle Hamilton celebrates an interception in the end zone against Purdue during their game earlier this season in South Bend, Ind.

Jim Leonhard has his hands full this week preparing the University of Wisconsin football team’s defense to play No. 12 Notre Dame.

But the defensive coordinator for the No. 18 Badgers (1-1) said Monday he still found some time to study Fighting Irish safety Kyle Hamilton, who’s unanimously regarded as one of the best defensive players in college football and considered a top-five level draft pick next spring.

Leonhard, a three-time All-American safety at UW and a 10-year NFL veteran, echoed the rave reviews Hamilton has been getting from others in the sport.

“To me the most impressive thing is just the amount of ways that he makes plays,” Leonhard said. “(I) have a lot of respect for his game because he’s not that one-trick pony, where it’s like, ‘Hey, (he) does this one thing really well, and they’re smart enough to have him do it over and over.’ He’s making plays all over the field — run game, pass game, man coverage zone coverage, blitzing. It’s impressive to watch.

“You forget how big he is when you see how well he moves. Everything that he’s generating as far as buzz around him is earned. It’s fun to watch a guy like that play. Very instinctual on the back end, which is half of the battle. It is cool to watch. I hope he doesn’t make any plays this week, but high likelihood that he’s going to be somewhere around the football.”

Hamilton will be a person of interest for each UW offensive play during Saturday’s matchup at Soldier Field in Chicago.

The 6-foot-4, 220-pound junior has the size and speed to fill a number of roles in Notre Dame’s defense. The Irish (3-0) trust him to cover large areas and almost dare quarterbacks to challenge him to break on a ball when he’s playing deep in a traditional safety spot. He also can roll into the box and serve like an extra linebacker or shift over to the slot and take away those options.

Hamilton has 22 tackles, two for loss, three interceptions and five passes defended through three games. His highlight plays this season include an interception along the sideline against Florida State — a play he started on the far hash mark and covered nearly 40 yards before making the toe-dragging catch — and a pick on a tipped ball in the end zone to seal the win last week against Purdue.

What former Badgers teammates say will be 'weird' about facing Notre Dame QB Jack Coan. And what won't

Hamilton has been targeted 17 times, allowing nine completions for 93 yards, according to Pro Football Focus. But opposing quarterbacks have a 29.4 NFL QB rating when targeting him after factoring in his interceptions and pass breakups.

How Notre Dame uses Hamilton this week could be a game-changing decision. Do the Irish leave him in the box and use him to take away tight end Jake Ferguson, one of UW quarterback Graham Mertz’s favorite targets? Do they have him cover receiver Danny Davis, another of Mertz’s top options?

Unlike a star defensive lineman or linebacker that the Badgers could scheme blockers for, it’s nearly impossible to game-plan around a player such as Hamilton. But coach and offensive play-caller Paul Chryst said Monday that despite how talented Hamilton is, the Badgers can’t hamstring themselves by trying to avoid him.

“You don’t want to rob Peter to pay Paul,” Chryst said. “And so I think that you’ve got to kind of build rules that it fits in. You play a good team, they’re going to have really good players. ... The good players, you know where they’re at, but you’ve got to be careful not to overcompensate.”

ESPN's College GameDay to be at Wisconsin-Notre Dame

Mertz will have to identify Hamilton’s spot on the field each play, and center Joe Tippmann will have to account for him whenever he’s in the box and could be blocked by an offensive lineman.

Being smart with how and when they challenge Hamilton doesn’t mean the Badgers will be afraid of him, senior Kendric Pryor said. Pryor, a sixth-year receiver, has seen plenty of star defensive backs during his time at UW and knows that even the best make mistakes.

“You can go look at any sport, everyone doesn’t win every rep,” Pryor said. “Things happen. It’s just how you respond, how you keep competing. I consider myself a competitor. He puts his pants the same I put my pants on, we breathe the same air, we bleed the same.

“You know you’re going against a good team and a good player, so you just got to be ready to be on your ‘A’ game. I feel like I’m a good player, like we’re a good team. So we’re just going out there competing, which is something that I love to do.”

Linebacker Zack Baun set a new career-high in tackles and contributed to a big special teams play on a day to forget for his team.

Baun had seven tackles for New Orleans in its 26-7 loss at Carolina, setting a new career high after moving to an inside linebacker role this season.

Baun also returned a blocked field goal 33 yards in the third quarter that gave the Saints some life.

Former UW wide receiver Quintez Cephus had a brilliant first-quarter drive against the Packers, hauling in a 46-yard catch to get his team inside the red zone, then caught a 5-yard pass on the left side of the end zone for the game’s first touchdown.

He narrowly missed bringing down a one-handed grab for another touchdown in the second half.

Cephus finished with four catches on seven targets and 63 yards in the 35-17 loss to Green Bay.

Former UW linebacker T.J. Edwards had a good game with six tackles, three of which were solo efforts in a tough loss for Philadelphia

Edwards, who’s in his third season as a starter for the Eagles, now has 11 tackles this season.

Isaiahh Loudermilk, a former Badgers defensive lineman, made his NFL debut Sunday with the Pittsburgh Steelers. The fifth-round draft pick made one tackle in the Steelers’ home loss to the Raiders.

Loudermilk may be in line for more work in the coming weeks after injuries hit the Pittsburgh defensive line group.

Former UW quarterback Russell Wilson had a big game for Seattle, though his team was on the wrong end of a 14-point comeback and overtime loss.

Wilson completed 22 of 31 passes for 343 yards and two touchdowns, including two deep TDs to Tyler Lockett and Freddie Swain. Wilson leads the NFL in 60-plus yard touchdowns this season.

UW safety Scott Nelson, who will line up across from Coan on Saturday at Soldier Field, said of his close friend: "I love the kid. I’ll always love the kid."

Most fans know about the Jack Coan and Graham Mertz matchup, but here are four other elements to Notre Dame’s game to keep an eye on Saturday.

Whether it’s stealing some grass or taking an extra moment to just be present, these Badgers players who are Bears fans are looking forward to playing at Soldier Field.

The Badgers will be looking for their third consecutive win over the Wolverines with the previous two coming at a combined score of 84-25.

The three-star running back was suspended on Aug. 31 by Badgers coach Paul Chryst after an altercation with a teammate in a residence hall.

Wisconsin kept its spot in the AP poll after its idle week.

Milwaukee native Ralph Kurek fondly recalls scoring the winning touchdown in the closing minutes of the Badgers' last win over Notre Dame in football, which came in 1963.

State Journal beat reporter Colten Bartholomew and columnist Jim Polzin get together to break down the Badgers’ marquee matchup with Notre Dame.

After a slow start to the year, UW quarterback Graham Mertz "wants to start dealin'" this week against the No. 12 Irish.

"There's so many things that have to fall into place in scheduling," former Badgers athletic director Barry Alvarez said about scheduling Notre Dame. "And it just never worked out until we were able to put this together."

Can the Badgers continue shutting down the middle of the field against Notre Dame?

Wisconsin's defense under defensive coordinator Jim Leonhard has been elite at taking away opponents' easy passes. Here's why it will be crucial this week.

Wisconsin vs. Notre Dame football: 3 keys to victory, why the Badgers' running game matters so much and a prediction

Badgers should have key defensive backs available against Notre Dame

Wisconsin coach Paul Chryst said that coming off a bye, his team should be healthy for its marquee matchup against Notre Dame.

Highlights from Barry Alvarez's appearance on 'Pardon My Take'

Follow postgame coverage from the State Journal after the 18th-ranked Badgers fell to the 12th-ranked Fighting Irish 41-13 at Soldier Field in Chicago.

Whether you are heading down to Soldier Field or watching from the comfort of your couch, the State Journal has Badgers fans covered with a complete breakdown of everything they need to know as No. 18 Wisconsin looks to take down the 12th-ranked Fighting Irish in Chicago.

Notre Dame safety Kyle Hamilton signals to a teammate during a game earlier this season in Tallahassee, Fla.

Notre Dame safety Kyle Hamilton celebrates an interception in the end zone against Purdue during their game earlier this season in South Bend, Ind.