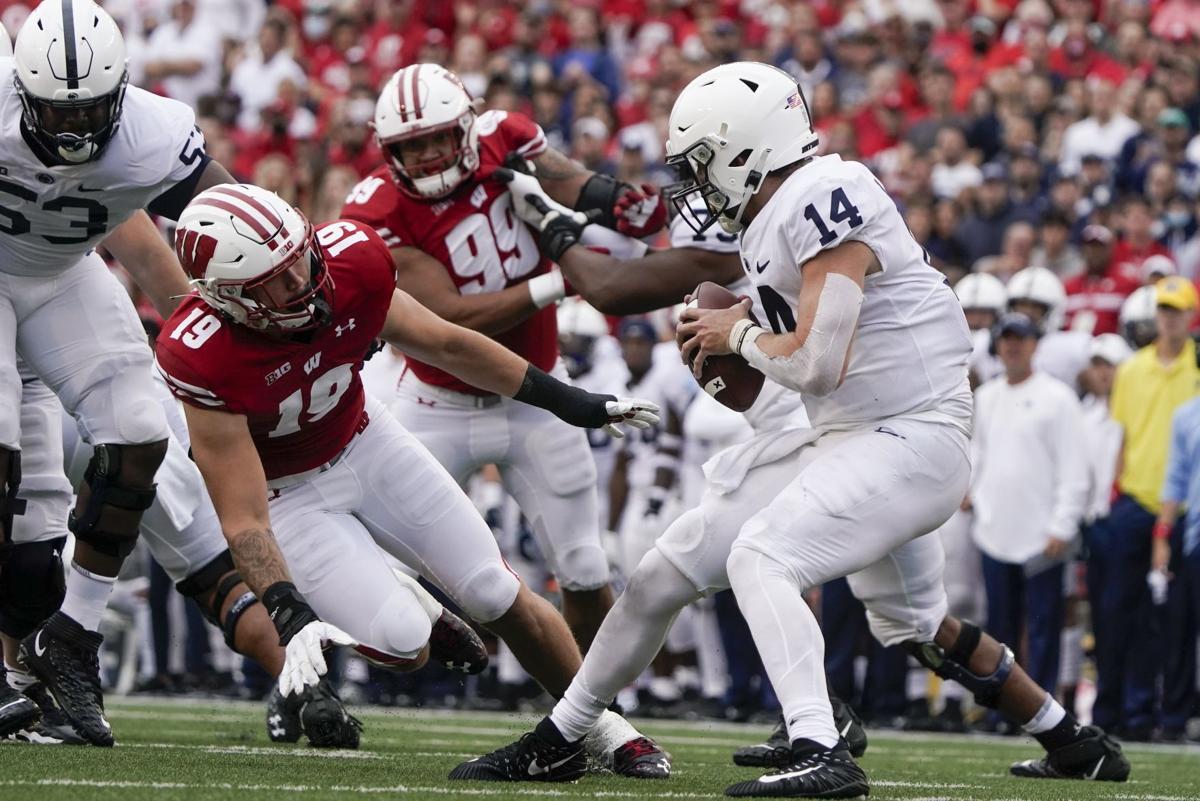 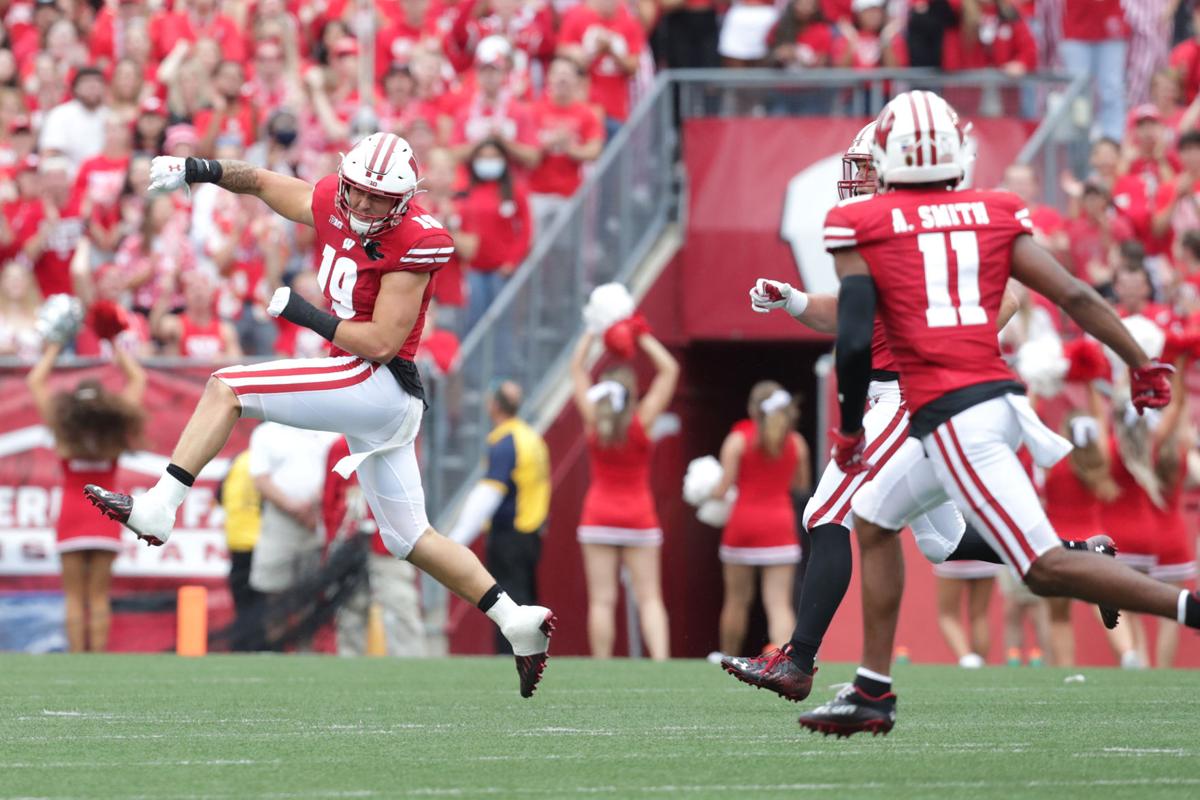 UW outside linebacker, left, celebrates his sack of Penn State quarterback Sean Clifford during the second half on Saturday.

Nick Herbig saw he had a direct line to the quarterback as he quickly turned the corner and got around the edge of the offensive line.

The University of Wisconsin sophomore outside linebacker barely was touched by Penn State sophomore right tackle Caeden Wallace. Herbig got a good jump on the third-and-15 snap, maintained his lane up the field to get Wallace to widen out, then brought his right forearm down hard across Wallace’s hands. Herbig’s move didn’t allow Wallace to get his hands engaged in the block and got him off balance, which let Herbig turn the corner and sack quarterback Sean Clifford 2.56 seconds after the snap, by a State Journal stopwatch.

It was the kind of move that Herbig could make athletically last season, but he hadn’t refined it to the point he could beat Big Ten Conference tackles with it consistently. Improving that pass rush was a theme throughout the Badgers’ offseason after the defense tallied just 11 sacks in seven games last season.

Though No. 18 UW (0-1) lost its opener to No. 11 Penn State, the Badgers recorded two sacks and had 13 quarterback pressures, according to Pro Football Focus. Clifford dropped back 37 times, giving UW a pressure rate of just more than 35%. That’s something the defense needs to continue and even improve.

“We can finish better,” Herbig said after stating the rush’s improvement was evident. “There’s some plays that we left out there that I came in free or (Noah) Burks came free or somebody else, a D-lineman, and we didn’t get the sack. So I think just capitalizing on our plays. Finishing is a big thing going forward.”

Clifford was able to get rid of the ball at the last second on three occasions that kept a sack off the stat sheet for UW, but pressure, particularly in the first half, kept him from getting settled and forced some bad throws.

Harassing the quarterback is important again this week when the Badgers host Eastern Michigan (1-0), which is using two quarterbacks to start the season.

“The guys were tight on their paths, I thought, and there was a lot of relentless effort,” UW coach Paul Chryst said. “And I think you combine that with … I think we’ve got some guys that naturally have the ability to be good in those types of situations. So that was good to see.”

Getting pressure on Clifford was a group effort, and multiple defenders spoke this week about the team’s depth in the front seven helping to attack quarterbacks.

Burks’ impact on the pass-rush might be the most encouraging sign going forward for the Badgers. Burks, a trusted veteran and sixth-year senior, is in his third season as a starter. But he hadn’t shown much in the way of being a disruptive playmaker in the past — something he said during training camp he’d focused his offseason on improving.

“More and more throughout camp going into the season, you started to see him win some of those one-on-one matchups, win with speed, win with his skill set more so than strength and just being sound play in and play out,” defensive coordinator Jim Leonhard said about Burks. “So excited to see what he can do.”

Though the secondary held its own against Penn State’s passing attack for the most part, four chunk passing plays in which the front wasn’t able to get pressure led to more than half of Penn State’s total yardage. Being better off the edge and with three- and four-man rushes this season — which the Badgers showed in the opener — will help add more bodies in pass coverage.

Herbig’s highlight sack came off a three-man rush. The play started with Burks threatening to rush on the opposite side of Herbig and Sanborn creeping around the line to force Penn State blockers to account for him. Herbig’s quick win in a three-man rush is something UW could use more of going forward.

“If you’re in a three-man rush and can get home with eight dropping, that’s as good as you can ask for,” said defensive end Matt Henningsen, who had a tackle for loss last week. “That’s something that we hope we can expand on, maybe convince coach Leonhard that you don’t need to rush more than three guys. We’ll see what we draw up for this week. And I’m sure we’ll have something ready. We always try to have something ready.”

Jim Polzin: The Badgers offense lacks imagination and execution. That needs to change, starting this week

UW has lost six consecutive games to ranked opponents dating to late in the 2019 season. The Badgers have scored 10 or fewer points the last four of those games. What gives? And what needs to change?

The Eagles defense, which ranked 119th against the run a year ago, will provide the Badgers offense with a chance to build confidence.

Pittsburgh's T.J. Watt didn't play during the preseason and did not participate in 11-on-11 drills during training camp, as the three-time Pro Bowler enters the final year of his contract and negotiations on a possible extension are ongoing.

Mike Maskalunas walked on to the Badgers football team. It's been a long road to his second consecutive start Saturday against Eastern Michigan.

Wisconsin leads Eastern Michigan 24-0 at halftime. Here’s what stood out in the first half.

It wasn’t a perfect performance for Wisconsin, but the Badgers got the victory and now have a week off to prepare to face the Fighting Irish.

UW outside linebacker, left, celebrates his sack of Penn State quarterback Sean Clifford during the second half on Saturday.