Looking the part never has been a problem for Braelon Allen.

The 6-foot-2, 240-pound running back for the 12th-ranked University of Wisconsin football team is as physically put together as a freshman can be. He moves both on and off the field with an easy power and efficiency.

Putting in the work isn’t an issue for Allen, either. You’ve probably seen the weightlifting highlights on social media this offseason, videos showing the 17-year-old squatting more than 600 pounds or cleaning over 400. Listen to his coaches and teammates, and they essentially will promise Allen’s day is coming and possibly soon.

Chances on the field may be hard to come by for Allen early in season, including Saturday’s opener against No. 19 Penn State at Camp Randall Stadium. He still is learning the intricacies of being a college running back after spending the majority of his prep career focused on defensive positions.

“Coach (Gary) Brown’s done a great job of really developing me just from raw, natural talent at the position,” Allen said last week. “It all starts with the playbook, obviously, just knowing what I need to do. And then I guess just learning defenses, understanding blocking schemes, things like that. All that goes along with the position that I really had to learn, really, all over again.”

Allen’s path to Madison wasn’t conventional. He should be two games into his senior season as a high schooler, but he chose to reclassify to 2021 to get his college career started sooner. That choice had him packing about 1.5 school years and a football season into the spring and summer months. On top of that, Allen was intensifying his training in preparation for the college game.

Myles Burkett, Allen’s friend and the Badgers’ 2022 quarterback recruit from Franklin, introduced Allen to Jonny Bridgewater, a sports performance coach who owns and operates a gym in Franklin. Burkett brought along Allen to a training session with Bridgewater and the pair immediately hit it off.

That relationship led to Allen traveling from his home in Fond du Lac to Bridgewater’s gym, about a 90-minute drive, twice a week to train. Those sessions, especially the flexibility and mobility work before games this spring, helped Allen dominate his junior season en route to winning Associated Press Player of the Year honors in the state.

Graham Mertz spent the offseason training to be a better QB. How he did it might surprise you

His dedication to his body and football took another step after his last high school season ended.

With his schoolwork mostly virtual due to the pandemic, Allen lived with Bridgewater for a little more than a month before he moved to Madison. Monday through Friday, Allen would wake up, start some schoolwork, get in a lift, attend virtual classes, spend time at Bridgewater’s gym, train a second time, then finish his schoolwork. The days were consistently between 12 and 14 hours of school and training, giving Allen a taste of college football before he was enrolled at UW.

“Just the fact of how dedicated this kid was to conference calls with his counselor in Fond du Lac, making sure he was doing the right things, making sure things got turned in on time, was actually just kind of admirable to see,” Bridgewater said. “He was on his computer and in the weight room with me. … That kid’s work ethic is next to none.”

A major difference for Allen when arriving at Madison was learning when he needed to give his body time to rest and recover.

“There’s been a couple times where I’ve gotten kicked out the weight room,” Allen said.

Allen will be featured on a sports reality show Bridgewater is developing with VrTuo Sports, which will show the development of athletes going from the high school to college level and from college to the professional ranks.

His willingness to grind has caught UW coach Paul Chryst’s eye. While carries early in the season will be handled by junior Chez Mellusi and redshirt freshman Jalen Berger, Chryst sees Allen’s dedication to the process of becoming a more complete player and said he’ll be one of the true freshmen to play a role this season.

“I think that there’s also kind of a learning curve for those guys that, if I didn’t break it for a touchdown (it’s not good),” Chryst said. “There’s just a lot to learn. And I love his approach and how he goes about it.”

The more experienced players in the backfield have been helpful in teaching the finer points Allen needs to learn, he said.

Allen was working with multiple special teams units during training camp, so he will be on the field in other ways than the tailback role early in his career. As his collegiate debut approaches, he’s been trying to temper his excitement and keep his focus on developing and helping the Badgers as much as he can in whatever role he can.

“Just showing that I can play and what I can do on the field. Running with power, just kind of trying to show guys that not only can I run the ball, but catch the ball out of the backfield, pass protect. Just showing them I’m an all-around back.”

Amid a worker shortage, the Badgers are putting a focus on getting fans into Camp Randall in a timely manner for Saturday's first game of the season.

There are three sets of siblings on the University of Wisconsin football team and it both helps and creates its own set of challenges for those who share the same last name.

Open Jim: How will the offensive targets be distributed for the Wisconsin Badgers football team?

Quicker play-call system should give the offense a big advantage this football season.

Fight between Badgers football players results in dismissal for one, suspension for another

Wisconsin cornerback is a respected voice inside the locker room and will have one of the toughest jobs on the field Saturday against Penn State.

Whether you are heading down to Camp Randall or watching from the comfort of your couch, the State Journal has Badgers fans covered with a breakdown of everything they need to know as No. 12 Wisconsin kicks off football season against No. 19 Penn State on Saturday.

Senior inside linebacker Mike Maskalunas or sophomore Tatum Grass is expected to start in Chenal's place Saturday against Penn State.

The Badgers defense allowed just three first downs in the first half, and UW leads 10-0 at the break. 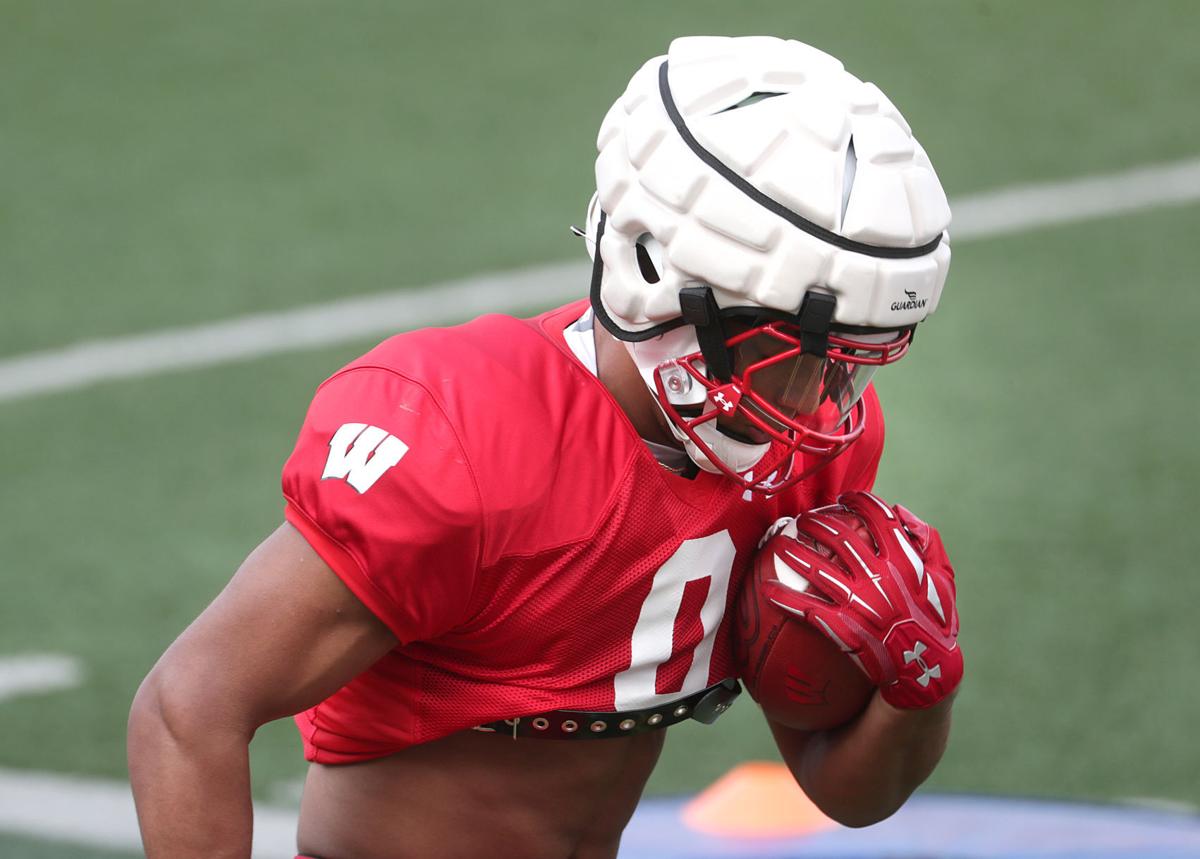 Running back Braelon Allen works through a drill during training camp. Allen may not see many carries early in his career, but coaches are high on what he will bring to the field once he gets there.