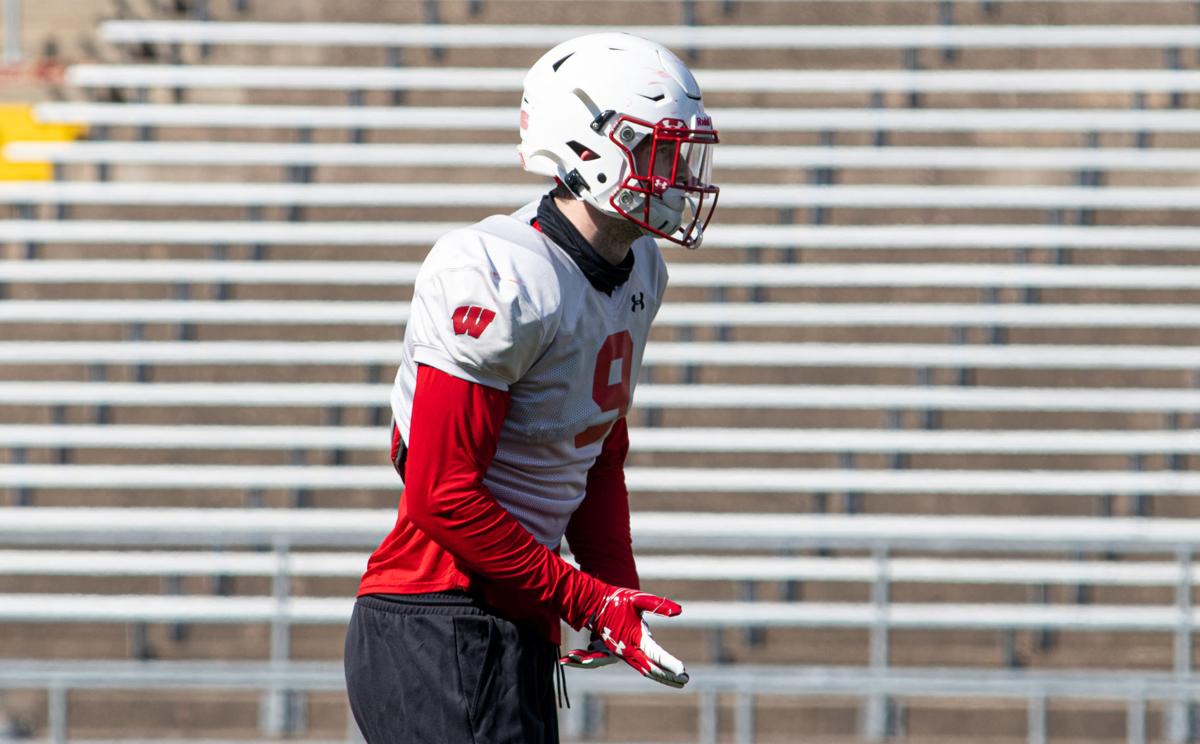 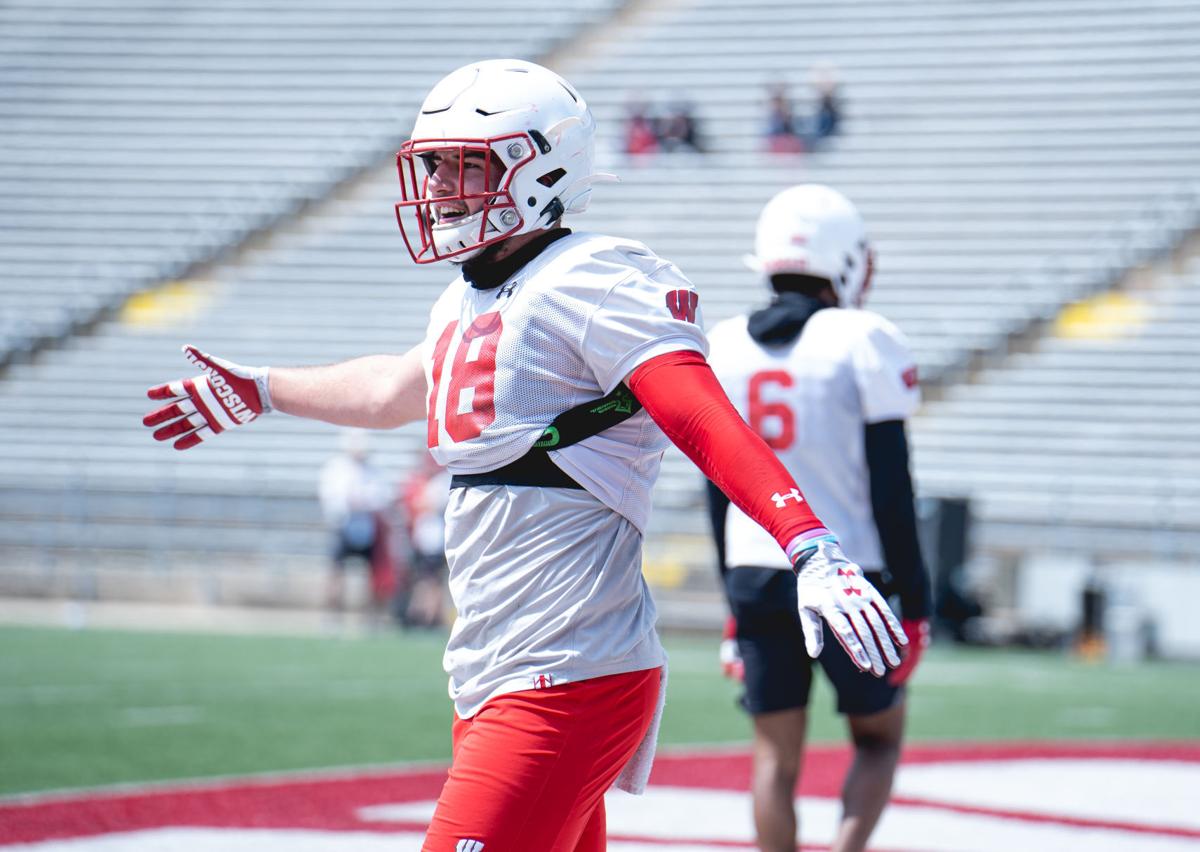 Senior safety Collin Wilder has been working on outside linebacker techniques this spring to prepare him to be lined up there in the fall. 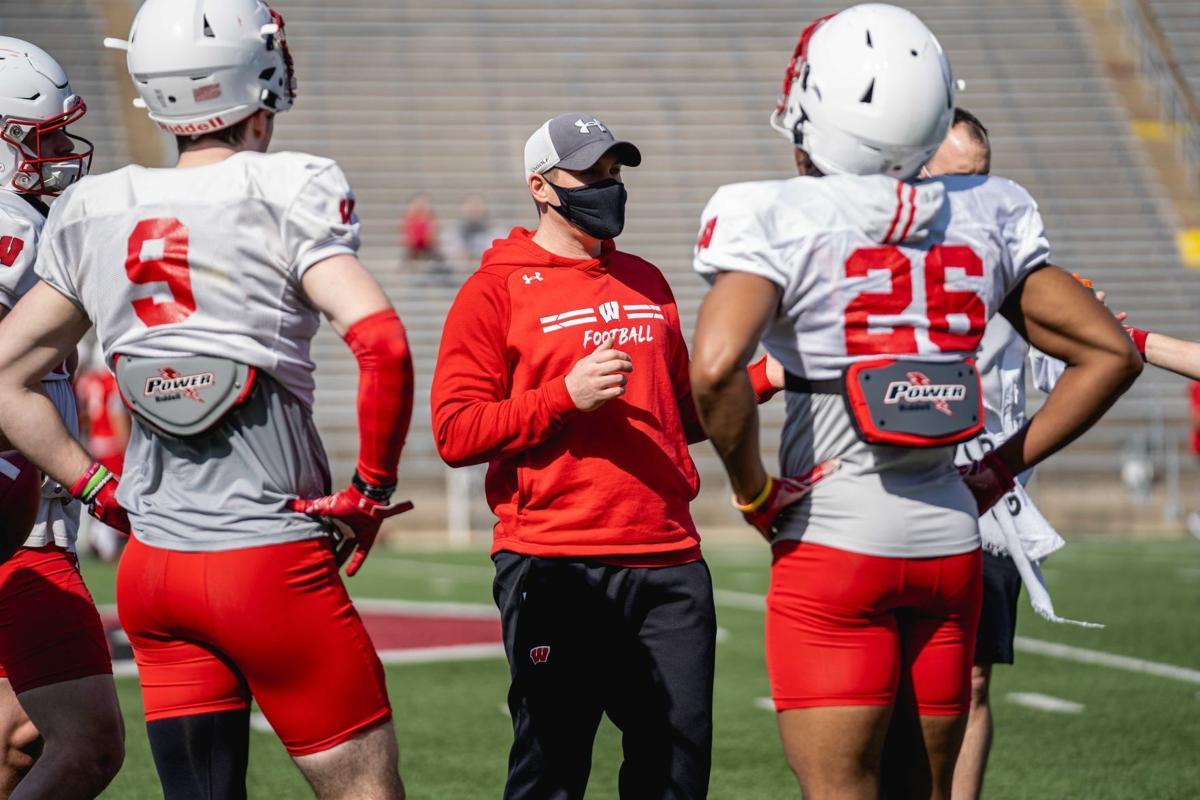 Badgers defensive coordinator Jim Leonhard wants his safety group to fill a variety of roles across the formation this season.

Jim Leonhard isn’t interested in labels when it comes to the University of Wisconsin’s defense.

The fifth-year coordinator coaches the Badgers’ safeties, sure, but he’s not going to limit what they do to pass coverage deep down the field.

“What I hit with our safeties a lot is there's very few … the farther you play this game, there's very few guys that I would say, ‘He's just the safety,’” Leonhard said on a Zoom call Monday.

Seniors Scott Nelson and Collin Wilder are in line to be UW’s starting safeties this fall and have been demonstrating the different roles Leonhard wants to put his safeties in. They’ve lined up at linebacker depth, both inside and outside, covered receivers on the outside and blitzed from multiple spots.

Nelson has a theory on where Leonhard, a former three-time All-American safety for UW before playing 10 years in the NFL, gets his willingness to experiment with safeties.

“I think his mind never stops working and trying to figure out how he can — maybe a little biased — how he can get safeties in positions to make plays," Nelson said. "As a safety, you’ve got to love that and appreciate that.

“So there's some stuff he's got in the works and we're learning and walking through now, more and more each day. Whether it's literally in a walkthrough or a couple reps here and there in practice, we're working on disguises and actually executing the technique.”

Nelson said he’s worked sparingly in the nickel corner position and some along the line.

Wilder has proven in his career at UW to be a big hitter who plays with good speed. He said he’s worked most at outside linebacker spots, where he’s aligned in a number of packages. Learning the footwork and hand-placement techniques to take on bigger blockers is a challenge, but Wilder’s enjoying it.

“We're everywhere, which is what I love about this scheme that coach Leonhard has,” Wilder said.

Junior John Torchio is taking advantage of the new looks — Wilder said he was leading the defensive backs in interceptions this spring.

“I really like going over the ball and kind of being off the QB,” Torchio said. “You’ve got no threat of getting beat deep, you don’t have to worry about a specific man. He’s putting us in different positions and we're messing with the scheme a little bit and I'm really enjoying it. I'm making plays off of it.”

Leonhard envisions opportunities across the board for the safeties this season, using the example of Natrell Jamerson with the group. Jamerson was drafted in 2018 after playing a variety of positions in the Badgers' secondary.

“You look at Natrell Jamerson, was kind of the same mold of, ‘Well, he played corner, he played nickel,’ and all of a sudden he kind of ends up in that safety position and you use his athleticism to create some matchups that are more in your favor,” Leonhard said. “Hoping to find guys that fit that mold. ‘Jam’ was pretty special for us his senior year, and trying to find guys that are flexible.”

Having a mix of skill sets will be crucial with Leonhard pushing his safeties into different roles.

Torchio played more on defense in 2019 than he did last season. Senior Tyler Mais is in a similar boat, although Mais played in each game of the past two years on special teams. Per Leonhard, sophomore Titus Toler has been out for “a significant amount of time” of spring practices with an injury, and junior Travian Blaylock was having a strong spring session before sustaining an ankle injury during practice April 17. Freshman Preston Zachman also has shown promise as he makes the transition from linebacker to safety.

Building depth and having more options to deploy was one of Leonhard’s focuses this spring.

“To me, a big part of college football is not necessarily taking snaps off of a guy because of lack of production, it's to allow guys to just play as hard as possible,” Leonhard said.

“You can play as hard as possible and we'll get you a blow because I have a lot of faith in that next guy coming in there. … It's kind of building in that mentality of you're going to get little breaks within the game, so empty the tank every series. Once the game gets on the line, we're going to get guys in there that have a great feel that week and in that game plan of how to execute in crunch time.”

The University of Wisconsin football team has been churning out pro players for decades, but which Badger produced the best rookie season?

The offense lacked same crispness it has had in other practice sessions.

The Badgers passing offense could be "explosive" if UW's top wide receivers can stay healthy this season.

“He told us that he wanted corners that played with a dog mentality. He just want dogs out there on the island," Badgers junior Alexander Smith said of  new cornerbacks coach Hank Poteat.

Dean Engram and Alexander Smith have earned most of their playing time the past three seasons on special teams units.

Which Badgers have the best chances of being selected in the NFL draft?

At least two Wisconsin Badgers have been drafted each year since 1994.

Nine of the 14 teams in the Big Ten appear set at quarterback heading into the fall. The five others will continue auditions in August, and no competition will be more closely watched than the one at Ohio State.

Senior safety Collin Wilder has been working on outside linebacker techniques this spring to prepare him to be lined up there in the fall.

Badgers defensive coordinator Jim Leonhard wants his safety group to fill a variety of roles across the formation this season.