The UW-Whitewater offensive lineman from Hartford blew up Twitter feeds as he consistently rag-dolled and pancaked many of college football’s top defensive line prospects during workouts for the Senior Bowl in Mobile, Alabama.

Some casual observers couldn’t look past Meinerz’s prominent belly, on full display to the world below his cut-off practice jersey. He’s fine with that.

“That gut, I’ve always had it,” the 6-foot-3, 325-pound Meinerz said. “My nickname in high school was The Gut. My nickname in Whitewater was The Gut. It was hot and humid (that week), and I always say I like to let the belly breathe.”

University of Wisconsin-Whitewater C Quinn Meinerz. Pushing dudes around on the field. An absolute gem. pic.twitter.com/xHEivAxely

But those who really paid attention found much more going on with Meinerz than a few amusing clips. He unabashedly put his work ethic, drive to succeed and love for football on display on one of the college game’s biggest stages.

The football world took notice. And it shared his heartbreak when he broke the fourth metacarpal in his right hand on Thursday. Despite impassioned pleas made to any coach who would listen, he was forced to miss most of Saturday’s game, playing only the last couple of plays in “victory formation.”

Although Meinerz entered as an afterthought and a curiosity, he emerged as the most impressive lineman of the Senior Bowl pack and became a player to watch in the April 29-May 1 NFL draft.

One analyst has him pegged as a third- or fourth-round draft pick at center — a far cry from the longshot “undrafted free agent” status even Meinerz had predicted for himself prior to Senior Bowl week.

Heady stuff for a guy whose main interest as a senior at Hartford came from Division II St. Cloud State, UW-La Crosse and UW-Whitewater.

“It showed how hard I’ve been working. A lot of people haven’t seen what I’ve been doing for so long,” Meinerz said. “Not having a season, quarantine, working out on my own, I was able to handle all of that.

“And when we came together for that week, I found out that I belonged.”

Meinerz has been following a strict training regimen for more than a year.

“(I’ve been) getting up every single day at 5 in the morning for training, changing my diet, not seeing my family or friends that often, all for this. It was a culmination of all the long work I’ve done the last 13 months.”

While most Division I teams played at least a partial schedule last fall, NCAA Division III teams did not play in 2020. So Meinerz was robbed of a senior season, getting in only a few practices with coach Kevin Bullis and his teammates.

Meinerz played center at the Senior Bowl, even though his Division III All-American honor came at left guard. He earned his invitation to tryout camp when Alabama center Landon Dickerson suffered a knee injury in the Sugar Bowl.

“I kind of learned center in the backyard,” Meinerz said.

Meinerz moved out on his Whitewater roommates early in the pandemic, worried that he might catch the virus more easily there. He wound up back in his parents’ home, eventually getting cleared to leave his basement gym for training sessions with Brad Arnett, the owner of NX Level Sports in Waukesha known for working with the Watt brothers.

And when his chance came, he stepped up — regardless of the position or the opposition.

“My confidence kept going up in Mobile. When you get down to it, football is football. When the ball is snapped, it’s ‘who are you?’ I know who I am. At the end of the day, I had to stay true to myself. That’s the best way to handle things.”

Now Meinerz is in Dallas, undergoing specialized training for an NFL Pro Day because there won’t be an NFL combine this year. He has goals for every measurable drill, knowing positive results could move him even further up on draft boards.

All he’s asking for is a chance.

“Me and all the guys on the football team at UW-Whitewater, we play because we really love the game,” Meinerz said. “I have unlimited fire when it comes to that.”

Snowstorm, strong winds, then dangerous cold will make for miserable weather week ahead for Wisconsin

If several inches of snow on Thursday aren’t bad enough, strong winds and then dangerously cold wind chills will follow for Wisconsin, according to forecasters.

A game-by-game look at the Badgers' new football schedule 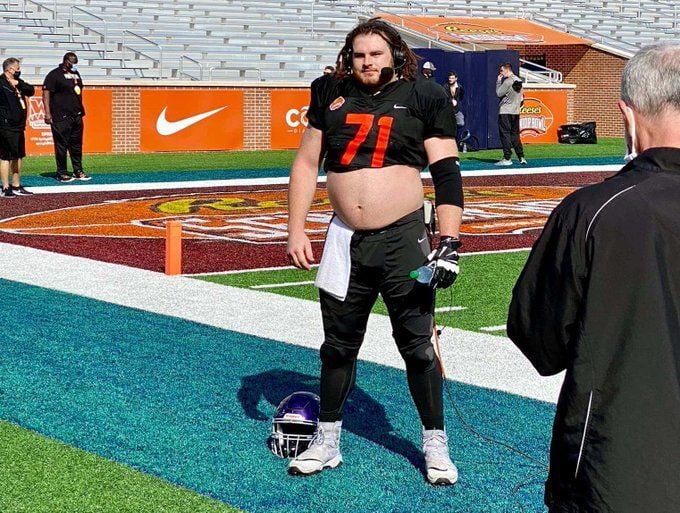 UW-Whitewater offensive lineman Quinn Meinerz blew up Twitter with this picture of his belly on Thursday and as he consistently rag-dolled and pancaked many of college football’s top defensive line prospects during workouts for the Senior Bowl in Mobile, Alabama. 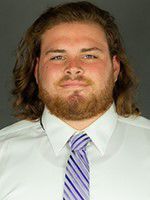