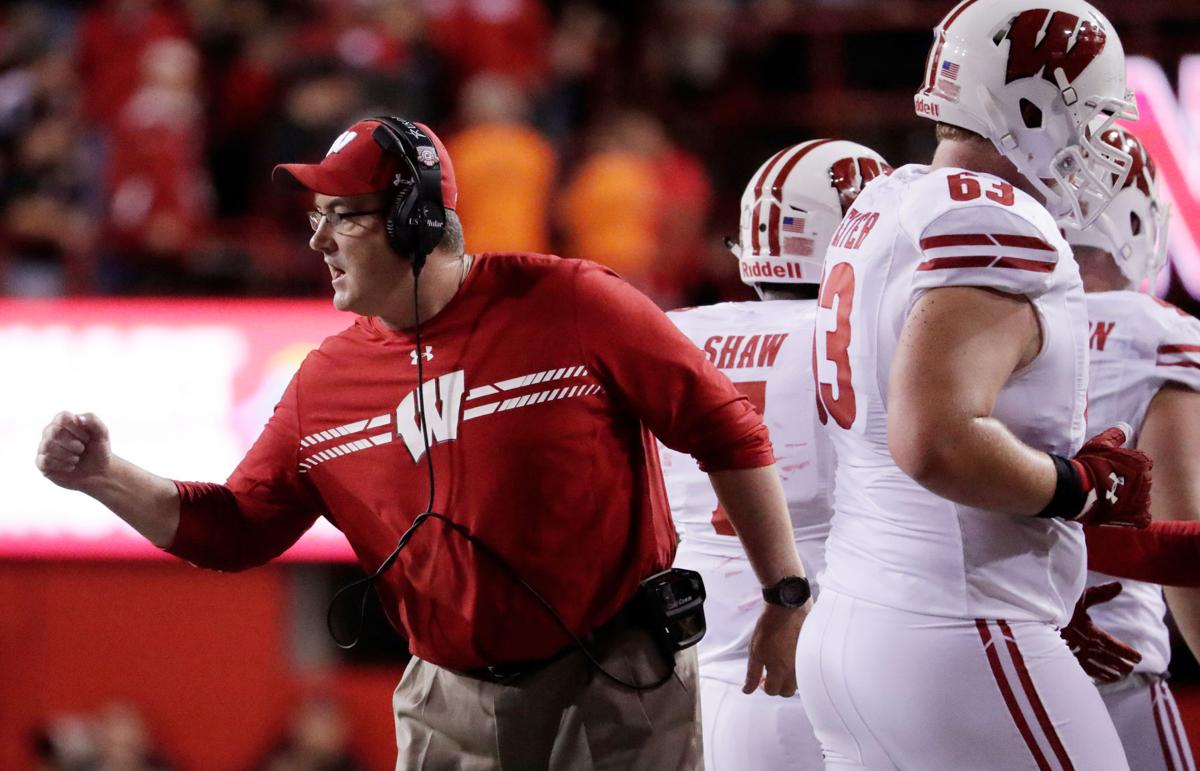 UW coach Paul Chryst cheers his players after a touchdown late in the fourth quarter of the Oct. 7 victory over Nebraska in Lincoln. 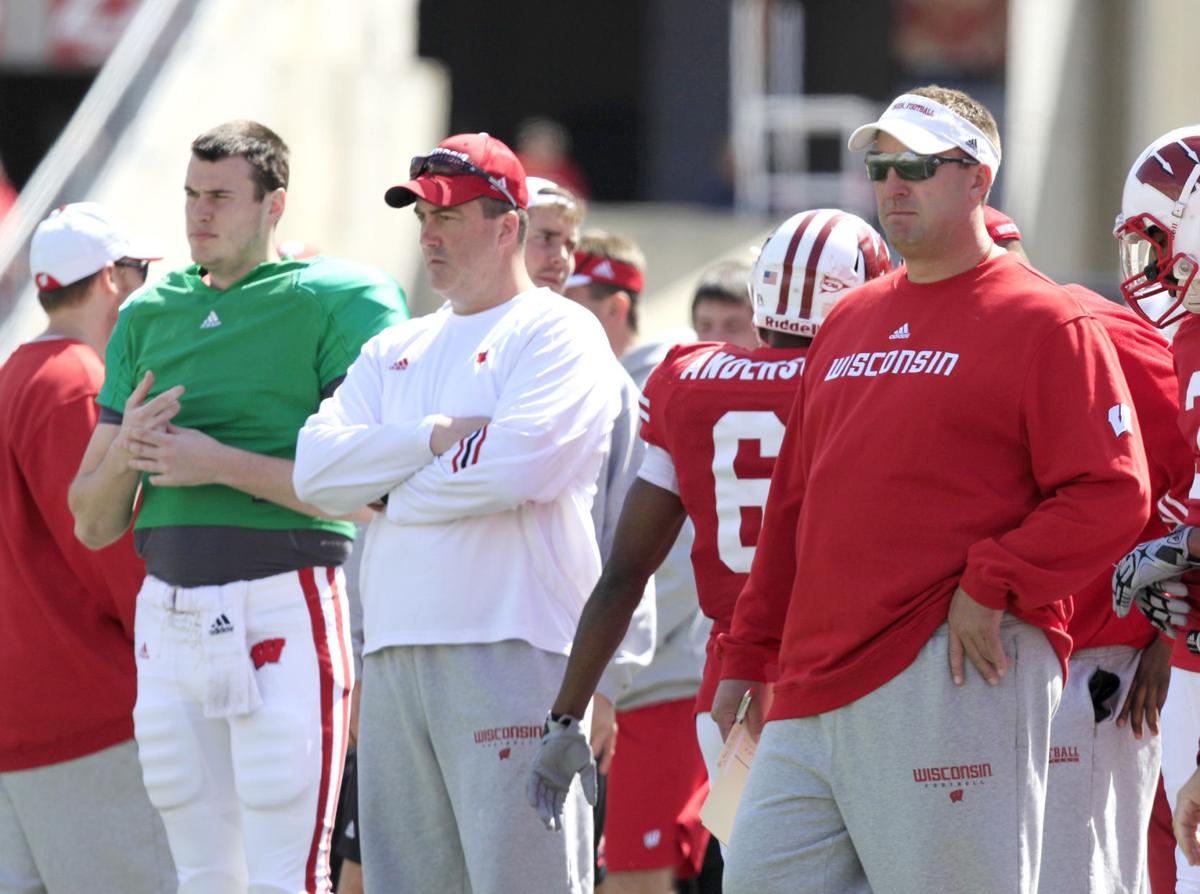 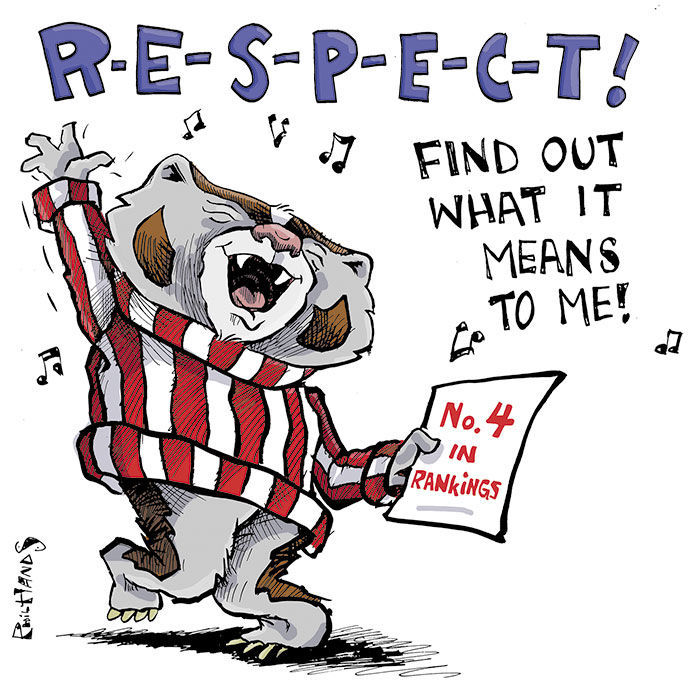 It’s funny sometimes how well things work out in sports, even when the preceding events seem cataclysmic.

Take, for instance, the never-saw-that-coming departures of football coaches Bret Bielema and Gary Andersen from the University of Wisconsin just days after their teams had played in the Big Ten Conference title game.

When Bielema left for Arkansas in 2012 and Andersen for Oregon State in 2014, people not only thought UW was losing high-quality coaches but that their unforced exits reflected poorly on UW’s place in college football.

Three years after Andersen’s departure, nothing could be further from the truth. Bielema and Andersen are out of work and UW, under home-grown coach Paul Chryst, is 12-0 and one victory away from a spot in the College Football Playoff.

Although it didn’t seem like it at the time, especially with Bielema, both coaches did athletic director Barry Alvarez a favor by leaving UW. With a 33-6 record, Chryst has UW functioning at perhaps its highest sustained level ever. At the same time, Bielema and Andersen were spectacular failures at schools they mistakenly thought gave them a better chance of winning than UW.

Though the departures of Bielema and Andersen were shocks to UW’s system, there is now reason to believe both coaches found success here because of UW, not in spite of it, as they intimated on their way out. That’s not to say they didn’t advance the program because, in some ways, both did.

Bielema was Alvarez’s hand-picked successor, coordinating UW’s defense for two seasons before taking over when Alvarez retired from coaching and moved into the athletic director’s chair full-time. Although he was a polarizing figure due to his inexplicable in-game decisions, news-conference bluster and off-the-field reputation, Bielema proved to be a strong choice by Alvarez.

His greatest strength was his program-building ability. Working off virtually the same blueprint as Alvarez, Bielema recruited solidly, maintained the emphasis on player development and raised the level of accountability for the players on the field and in the classroom. And he also won a lot, including three consecutive Big Ten titles.

To the surprise of no one, Bielema was fired Friday after Arkansas compiled a 4-8 record in his fifth season. Upon leaving UW, he spoke of being able to win a national title at Arkansas, but his experience there suggests Bielema had a better situation at UW and for some reason walked away from it.

Let’s look at the numbers. At UW, Bielema had a 68-25 record, including a 37-19 Big Ten mark. At Arkansas, he was 29-34 overall and 11-29 in the SEC. Some will say the disparity between Big Ten and SEC talent accounts for that, but that’s hogwash. Other than Alabama and (this year) Auburn, the SEC West Division hasn’t been all that good the last few years.

Perhaps the most distressing aspect of Bielema’s departure was he blamed Alvarez for not giving him enough money to pay his assistant coaches. Again, the numbers tell a different story. In seven years at UW, Bielema had 24 assistant coaches. In five years with Arkansas’ larger payroll, he went through 20. Clearly, there was more to Bielema’s high staff turnover than money.

Still, Bielema was successful at his next job compared to Andersen, who went 7-23 in two-plus seasons at Oregon State before walking away in frustration in October. Andersen had gone 20-7 at UW, but the suspicion is he merely capitalized on the talent and team-first attitude he inherited from Bielema.

Unlike the Bielema hire, Alvarez made a poor decision by bringing in Andersen, who was simply a bad fit for UW. It seemed like Alvarez got in too much of a hurry after his preferred candidates — Al Golden of Miami (Fla.) and Paul Rhoads of Iowa State — rebuffed his advances, jumping at the first good candidate who came along after that.

Andersen had a great track record at Utah State, but he and Alvarez never got on the same page prior to his hiring in areas that are essential to UW’s success such as player development, strength training, the walk-on program and style of offense. All lapsed badly during Andersen’s two seasons. Indeed, another year or two and everything Alvarez had built over 25 years might have been lost.

Like Bielema, Andersen left UW for greener pastures, but he simply traded one set of perceived problems for another. Andersen claimed he was limited by UW’s rigid academic standards. When he left Oregon State, he complained about his coaching staff and funding for a practice facility. He could have avoided all that complaining had he not botched up the quarterback situation at both schools.

The Andersen years at UW weren’t a total washout. He switched the defensive scheme to a speed-based 3-4 and set the course for what has become the nation’s No. 1 unit. But that is about the only consolation from a bad hire.

At least Alvarez learned his lesson and hired Chryst three years ago. There is a way to win at UW and Chryst knows it through and through. Better yet, he’s not going to go job-hunting after Saturday’s Big Ten title game.

College football: The rise and fall of Bret Bielema

Take a look back at the highs and lows of the college coaching career of former Wisconsin Badgers head football coach Bret Bielema.

Video: Why an 8-team playoff is a bad idea

A lot of people want to see the College Football Playoff expanded to eight teams but Clement Townsend is strongly against it. Take a listen as to why!

Paul Chryst won both the Dave McClain Coach of the Year (media) and the Hayes-Schembechler Coach of the Year (coaches) awards after leading the fourth-ranked Badgers (12-0, 9-0) to an undefeated regular season and a second straight Big Ten West title.

Excitement builds as Badgers fans gear up and head to Indy, yet again

This year marks the fifth Big Ten Championship game since 2011 for the Badgers football team while the basketball team played in the Final Four there in 2015.

James and Sheehy watched from the sidelines last year as UW blew a 21-point lead to Penn State.

Bielema was fired by Arkansas after posting a 29-34 record in five seasons.

The former University of Wisconsin head coach has spent the past year as a consultant to Patriots coach Bill Belichick in what was his first NFL position.

Gary Andersen, who coached the Wisconsin Badgers in 2013-14, was in the second year of his second stint at Utah State.

Bret Bielema, who led Wisconsin to three conference championships before a disappointing run at Arkansas, is returning to the Big Ten and his home state to coach Illinois.

UW coach Paul Chryst cheers his players after a touchdown late in the fourth quarter of the Oct. 7 victory over Nebraska in Lincoln.