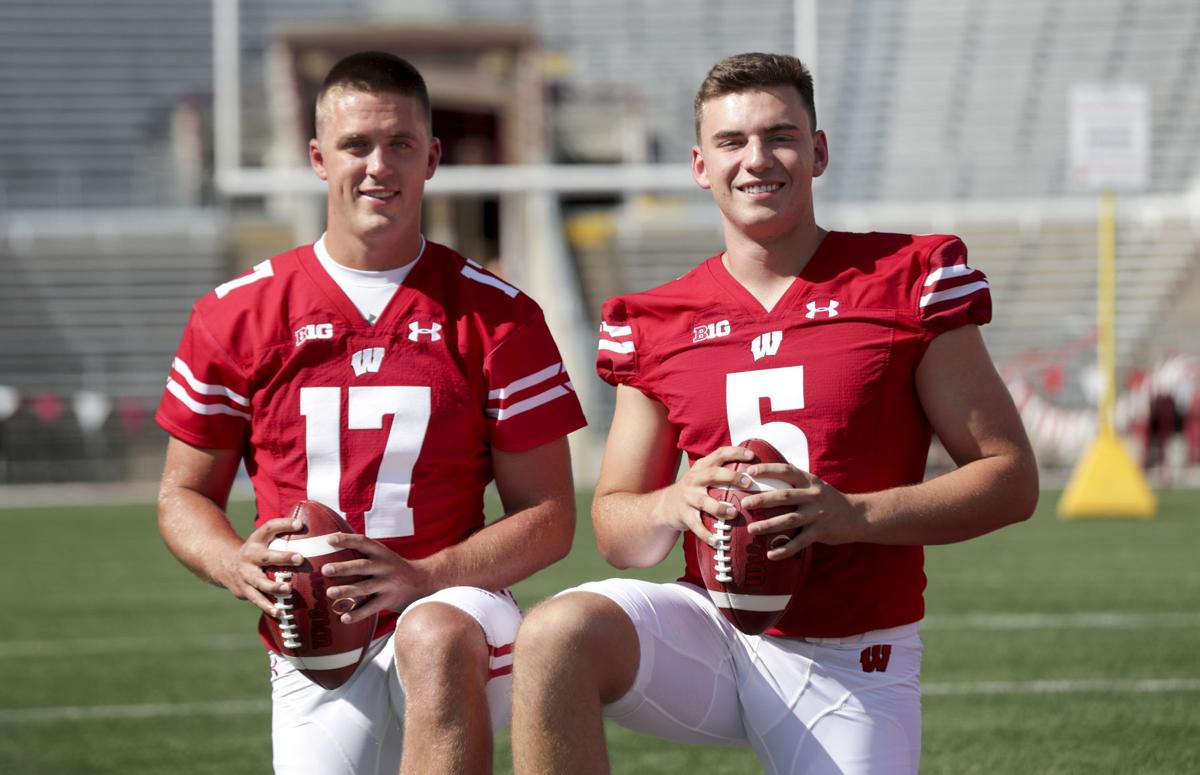 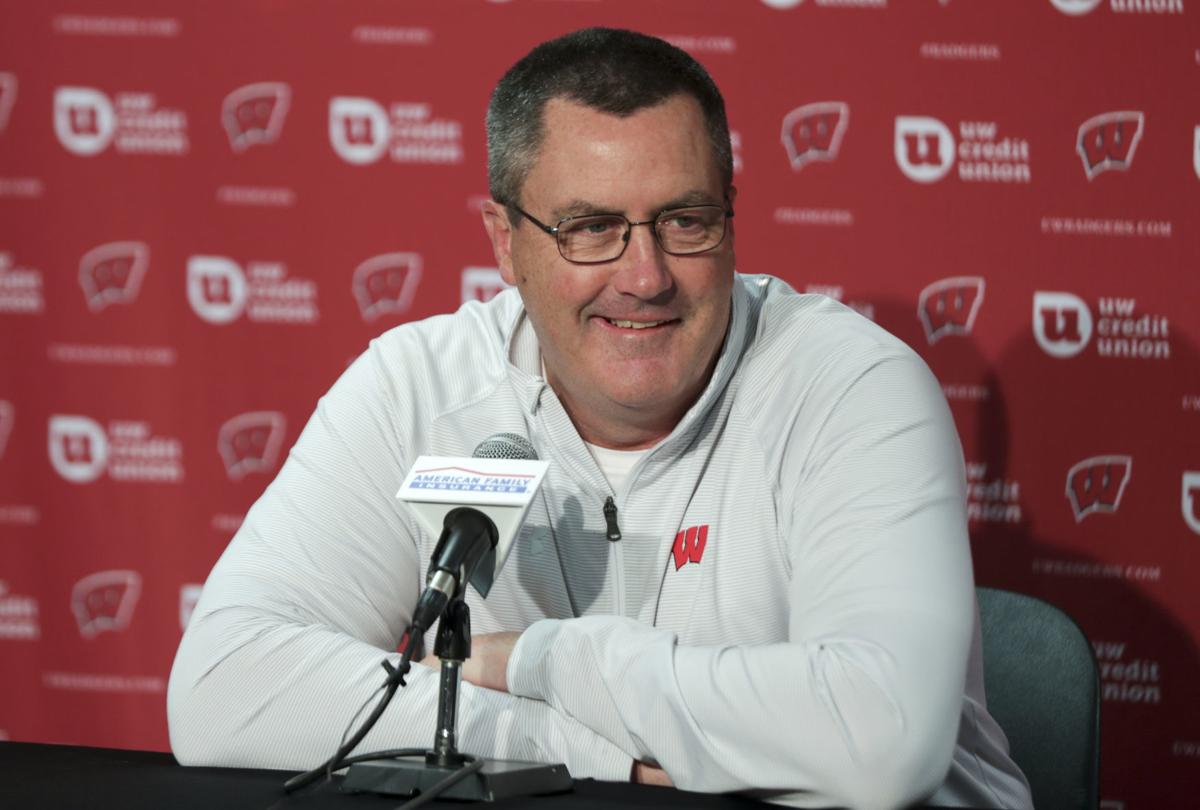 Coach Paul Chryst said Wednesday that UW enters the season with not a "ton of experience" at quarterback.

The wait is finally over.

The University of Wisconsin football team opened its fall camp Wednesday, which means its most highly anticipated quarterback competition in a decade has commenced.

Coan has the most experience, having started four games last season and improving toward the end. Some think the competition is between Coan and Mertz, who enrolled early so he could participate in spring practice and demonstrated the wide range of skills that made him one of the top quarterback recruits in the nation. But to anoint Coan and Mertz would be a disservice to Vanden Boom and Wolf, both of whom showed quite well during spring drills.

Coach Paul Chryst has leaned heavily on experience when making quarterback decisions in the past, which would seem to give Coan a leg up, but the reality is the Badgers have four pretty good quarterbacks from which to choose.

“That’s why I love the quarterback room so much is because there’s guys that work at it,” Budmayr said. “We’ve got to clean up some stuff because for them to be on the field you want to be able to trust them — the decision-making and all the stuff that goes into it. But they work like crazy at it. From a talent standpoint, you don’t get nervous with any of them because they can all make the throws that you’re asking them to make. Now it’s just honing in one some of the decision-making and situational play.”

If you’re looking for indicators in this competition, trust would seem to be a good one. The coaches will gravitate toward the quarterback who knows the offense, understands situations and remains even-keeled. In other words, a quarterback they can trust.

The first week or so of practice will be spent on playbook installation and skill development. After that, the real competition will start.

“I think the experience is huge, it’s really valuable, and yet we’re not going to have a ton of experience at that position,” Chryst said. “I think we can coach that, though, and help them through that and they’ll gain it. That’s why I’m pumped that Jack did have some genuine experience where he’s been in a lot of different situations. The other quarterbacks have got to be smart enough to see the other quarterbacks on tape ... and learn from others’ mistakes.”

Coan was far from dynamic in any of his starts but was efficient in his final two, victories over Purdue and Miami (Fla.). His arrow is pointing up and he took first-team reps throughout the spring, but he’s taking nothing for granted.

“I’m not really worried about the competition,” Coan said. “It’s mainly a competition between me and myself, I feel like. I’ll bet you the other quarterbacks would say the same. It’s really just focusing on how you can improve yourself and maximize each and every play.”

Still, the game situations Coan experienced last season give him a mental library to draw on that the others don’t have. He didn’t make many plays down the field, but that should come with growth, both in his confidence and the coaches’ confidence in him.

“I feel like it helped a lot, just playing in all the different situations and environments,” Coan said. “It’s one thing to play in practice, but it’s a whole ‘nother speed in the game.”

Mertz has experience of a different kind, having been exposed to a wide variety of approaches at the various camps and all-star games he attended. During the spring, he threw with accuracy, touch and anticipation — signs of a freshman who is wise beyond his years.

The best thing about Mertz is he showed up with the proper attitude. He even swore off Twitter six months ago so he could concentrate on preparing himself to compete for the starting job.

“The biggest thing was just spring ball, graduating early, getting up here,” Mertz said. “Spring ball came and once you just throw yourself into it and just say, ‘I’m all in. I’m just going to test myself to see how I do,’ that’s when you really grow. I thought it was great for my growth and my aspect on the whole playbook.”

The competition will play itself out, but my belief is Coan’s experience will earn him the starting job, in part because the opener is on the road against a quality South Florida team. Some of Chryst’s quarterback decisions at UW support that belief. He usually picked the one who had played the most or been in the program the longest.

Chryst’s history doesn’t guarantee any one outcome this year, though. All we really know is the competition is finally on.

Everybody plays golf for business, or so it's said, so the University of Wisconsin offers the Badger Academy for Badgers football seniors to h…

Begun in 2007, the games bring together national champions from over 100 countries to compete in a high-intensity range of exercises involving weightlifting, power-lifting, gymnastics and sprint interval training.

The University of Wisconsin released its 2019 fall camp roster online Tuesday, and it revealed that junior Madison Cone has moved to safety.

The University of Wisconsin football team has scheduled a home-and-home series with Alabama for the 2024 and 2025 seasons.

A chance meeting at an airport restaurant with University of Wisconsin athletic director Barry Alvarez led to the inside linebacker coming to Wisconsin.

"It was definitely something I was interested in trying," said Cone, who played cornerback his first two years with UW.

Badgers tied for No. 17 in USA Today preseason coaches poll

UW's No. 17 ranking breaks a streak of seven straight polls to close last season where UW missed out on the top 25.

After tearing his ACL while at Houston in 2017, Wilder hasn't played a game in nearly two years.

Game attendance is lagging across the country, so athletic departments need to respond — and more attractive matchups is one of the answers.

James Blackman is the early leader to be the starter when Florida State opens the season against Boise State on Aug. 31 in Jacksonville, Florida. But it's not a given.

Coach Paul Chryst said Wednesday that UW enters the season with not a "ton of experience" at quarterback.