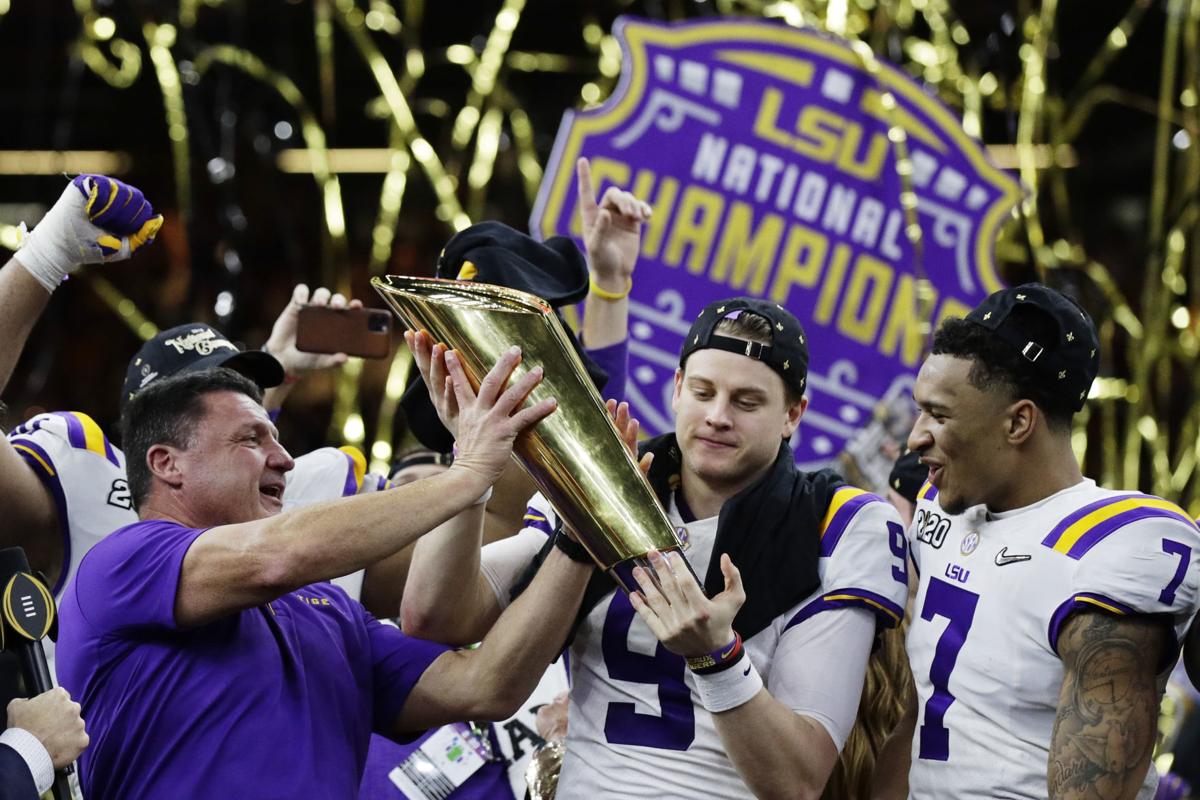 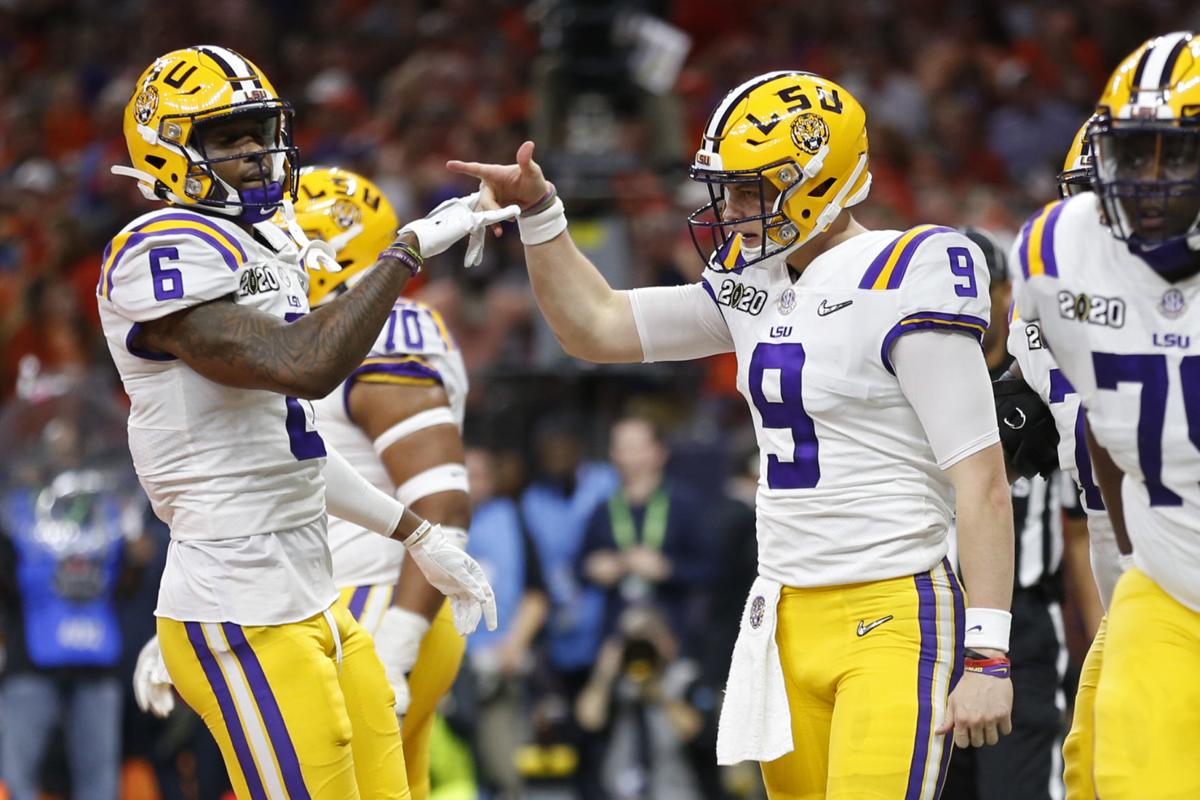 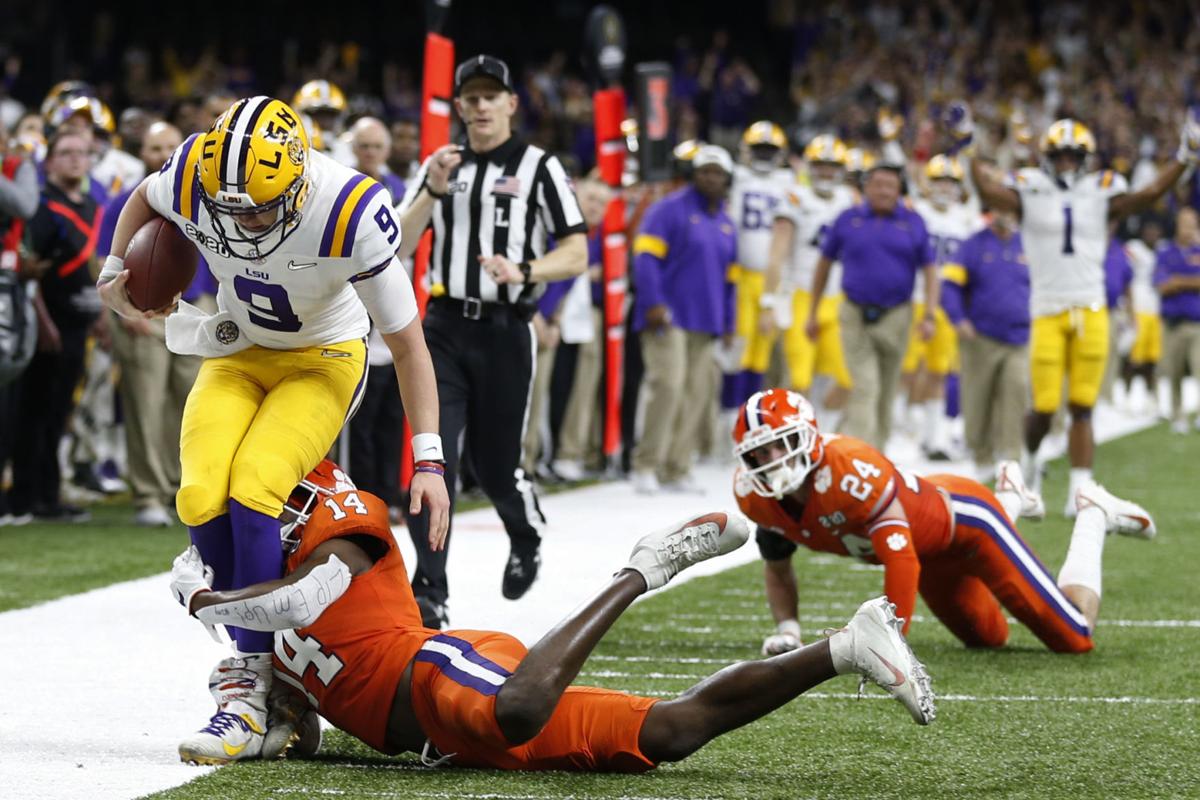 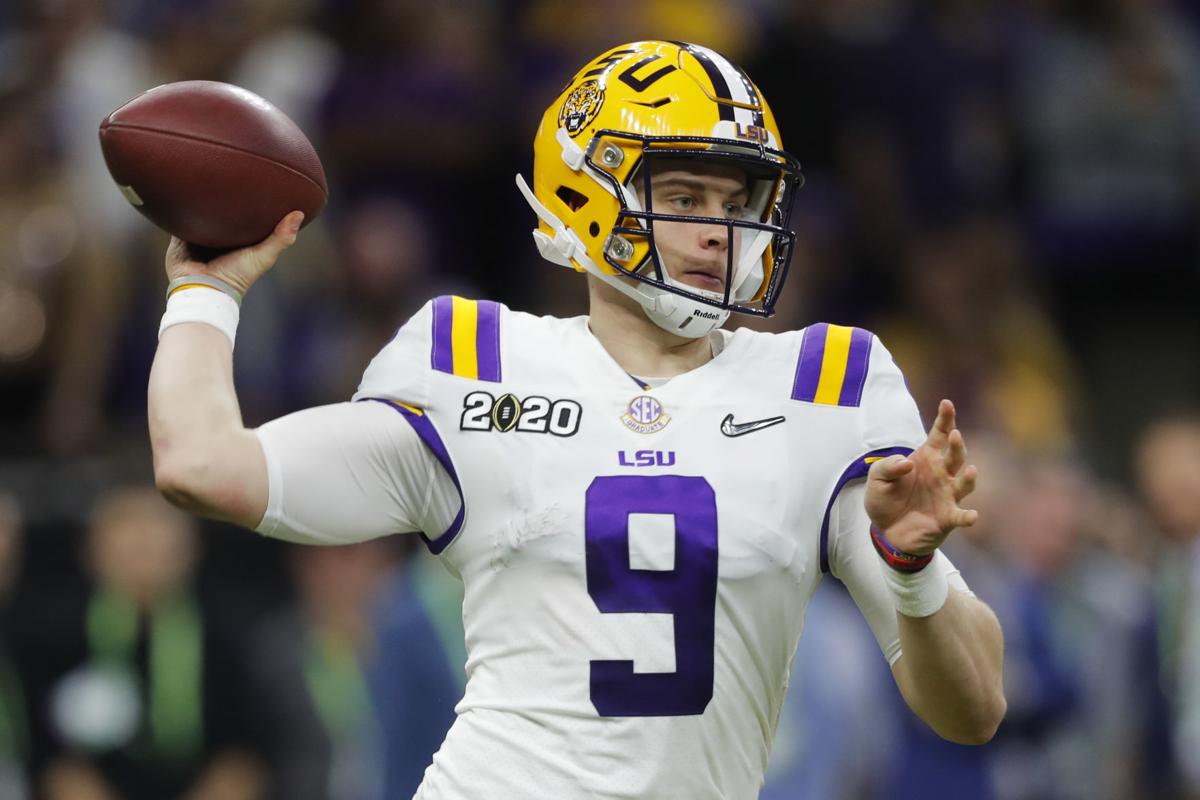 Burrow threw five touchdown passes, ran for another score and finished off one of the most accomplished seasons in college football history by leading the top-ranked Tigers to a 42-25 victory against No. 3 Clemson on Monday night in the playoff final.

"He's one of the greatest players in LSU history," Tigers coach Ed Orgeron said. “He's done so much for the state of Louisiana and LSU. We are so grateful to Joe Burrow.”

The senior quarterback from The Plains, Ohio, led the Tigers (15-0) to their first national title since 2007 and fourth overall, breaking a few more records along the way in what was already an historic season. His five TD passes and 463 yards passing are the most for a BCS or College Football Playoff title game as were his six total touchdowns.

“This is what I wanted to do from the time I was 5 years old, was hoist this trophy, and bringing it back to Louisiana,” Burrow said, then caught himself. “I guess we’re in Louisiana, but staying in Louisiana, we weren’t going to let someone come in here and steal this from us in our home state.

“We have a great fan base that came out and supported us. We were going to keep this thing right here.”

Under a shower of sparkling white, gold and purple confetti, Burrow raised the CFP championship trophy toward the Superdome roof. The party was on — no doubt already raging on nearby Bourbon Street.

“I hate how it finished,” Lawrence said. “But man, we did some really amazing things.”

"It’s been a long time since I’ve stood in front of a team after a loss,” Clemson coach Dabo Swinney said.

On this night, Lawrence (18 for 37 for 234 yards) was no match for Burrow — the Ohio State transfer who threw all of 16 TD passes last season with LSU.

His ascent has been dizzying and unprecedented. Running a version of the New Orleans Saints' offense that was brought to LSU by 30-year-old assistant coach Joe Brady, Burrow and an array of talented receivers transformed these Tigers into one of the most prolific offenses college football has ever seen.

The Saints' Drew Brees, Burrow's idol growing up, could not have done it better.

This was Orgeron's vision for LSU when he was promoted from interim coach in 2016. There was plenty of skepticism when LSU tabbed the Cajun who had failed in his first crack as a head coach with Mississippi.

Orgeron has proved to be the perfect fit for LSU. Just like Burrow.

After tossing his fifth touchdown pass of the night, a perfectly placed jumped ball to Terrace Marshall Jr. from 24 yards out to make it 42-25 with 12:08 left in the fourth, Burrow signaled TD and strolled to the sideline.

The Superdome is LSU's dome away from home, about 80 miles from the Tigers Baton Rouge campus, and it was rocking.

The LSU band broke out its unofficial anthem, “Neck,” and as the Tigers bounced and waved towels on the sideline, Burrow just sat on the bench, bobbing his head and waving one arm.

Joe Cool. Just doing his thing. Next stop: The NFL draft, where he will likely be the first pick in April.

The final score was lopsided, but it was far from easy for LSU and Burrow.

Clemson pushed LSU into the deepest hole it had to climb out of this season in the first half. Two weeks after Lawrence ran for a career-best 107 yards against Ohio State, he opened the scoring with a 1-yard jaunt around right end in the first quarter.

After B.T. Potter kicked a career-long 52-yard field goal for Clemson to make it 10-7, the Tigers sprung receiver Tee Higgins on a 36-yard reverse for a score to make it 17-7.

It took LSU 5:19 to wipe that out and take the lead, with Burrow and his favorite receiver, Ja'Marr Chase, doing most of the damage. The Heisman winner hit the Biletnikoff Award winner with a long ball to set up a quarterback draw from 3 yards out to make it 17-14.

Burrow and Chase hooked up for a 14-yard touchdown with 5:19 left in the second quarter and LSU fans erupted as their Tigers took the lead for the first time, 21-17. They never looked back.

The SEC Tigers weren't done. Burrow led LSU on a 95-yard drive, taking a hard shot on a long run before finding Thaddeus Moss, son of former NFL star receiver Randy Moss, standing alone in the end zone. That made it 28-17 with 10 seconds left in the half.

Clemson defensive coordinator Brent Venables flummoxed LSU for most of the first quarter, with tight coverage and hard-to-decipher blitzes. Burrow, Chase and Co. put up 269 yards in the second quarter.

“Coach Venables is great at what he does, it just took us a while to get it figured out,” Burrow said.

Did they ever. LSU dropped 628 yards and six touchdowns on a Clemson team that came in allowing 264 yards and 11.5 points per game.

“Weapons all over the field. We’ve been seeing it all year," LSU safety Grant Delpit said. “Just seeing how many weapons we had on offense is just crazy.”

Over the last three games of his spectacular season, against Georgia in the Southeastern Conference championship game and Oklahoma and Clemson in the playoff, Burrow passed for 1,305 yards and 16 touchdowns. LSU won those games by a combined score of 142-63.

When it was all over, Burrow puffed on a victory cigar as he made his way from the locker room to the postgame news conference. No one was about to tell him he couldn't smoke inside.

This season, the LSU hero has done just about whatever he wants."

“I don't know about the whole hero thing," Burrow said, “but I know this national championship will be remembered for a long time in Louisiana.”

In his first game as a Heisman Trophy winner, Joe Burrow threw for seven touchdowns and 493 yards as No. 1 LSU romped to a stunning 63-28 victory over No. 4 Oklahoma in the Peach Bowl semifinal game Saturday.

Facing a serious challenger for the first time in months, No. 3 Clemson and its perfect quarterback had to tap into their championship DNA to beat Ohio State and advance to the College Football Playoff title game for the fourth time in five years.

Justin Fields vs. Trevor Lawrence: ‘This is the future of the NFL’

When Justin Fields and No. 2 Ohio State take on Trevor Lawrence and No. 3 Clemson in the College Football Playoff semifinal at the Fiesta Bowl on Saturday it could be the start of something big.

During his 30 years at the helm of the Big Ten — which officially ends Jan. 1 — Jim Delany’s approval rating has ranged from roughly 0 to 100, depending on the timing and source of opinion.

After winning two of the last three national titles, Clemson is putting together its highest-rated recruiting class ever as high school seniors across the country finalize their college selections during the early signing period that begins Wednesday.

The 2020 Heisman Trophy race will start with a couple of clear front-runners and plenty of room for other stars to emerge, the way LSU's Joe Burrow did this year.

The final Associated Press Top 25 of the season has a familiar look, and for the first time since 2006 every preseason top 10 team finished the season ranked.

Baylor was finalizing a deal Thursday to make LSU defensive coordinator Dave Aranda the new coach of the Bears, according to a person with knowledge of the agreement.