University of Wisconsin football coach Paul Chryst got a raise before this season began that took his compensation to more than $5 million.

The UW Board of Regents approved the new deal, which pays Chryst $5.25 million this year, in closed session Sept. 1. That was three days before the Badgers opened the season with a home loss to Penn State. UW provided the contract Monday in response to a public records request that was filed the day of the meeting.

The Badgers have started the season 1-3, including back-to-back losses to Notre Dame and Michigan in the past two weeks.

Athletic director Chris McIntosh said the agreement originally was scheduled to be taken to the Regents in 2020 after UW won the Big Ten West and played in the Rose Bowl the previous season. The COVID-19 pandemic halted things, McIntosh said.

Chryst and others among the highest-paid UW athletics employees took a 15% pay cut last year to help offset revenue losses during the pandemic. That totaled a loss of more than $600,000 for Chryst, McIntosh said.

"It's hard to imagine having a better partner than coach Chryst in working through all the challenges of COVID," McIntosh said. "He's been patient."

A better financial outlook fueled by the return of ticket revenue this season made McIntosh confident it was time to go to the Regents with the proposal, he said.

McIntosh said the Badgers' struggles since the 21% raise was approved don't change the picture for him in terms of Chryst's compensation.

"I made the decision at the time based on the performance of our coach, and that's what we did," said McIntosh, who was elevated from deputy athletic director to AD at the start of July.

The $4.25 million that Chryst was scheduled to make for the 2020 season before he took the pay cut was fifth among seven coaches in the Big Ten West and eighth in the conference according to a USA Today database that was last updated in November 2020.

Chryst's base salary paid by the athletic department is $400,000, but an additional compensation agreement with the UW Foundation provides most of the pay.

He also will be scheduled to earn $5.25 million for the 2022 season before an annual escalator of $100,000 starts for 2023, according to the contract. Chryst has a five-year contract with UW.

Chryst's top two assistant coaches had their pay reworked in the offseason. Defensive coordinator Jim Leonhard got a 25% boost to nearly $1 million per year. Joe Rudolph took a 6% cut to $675,000 as his title was changed from associate head coach/offensive coordinator to run game coordinator/offensive line coach. 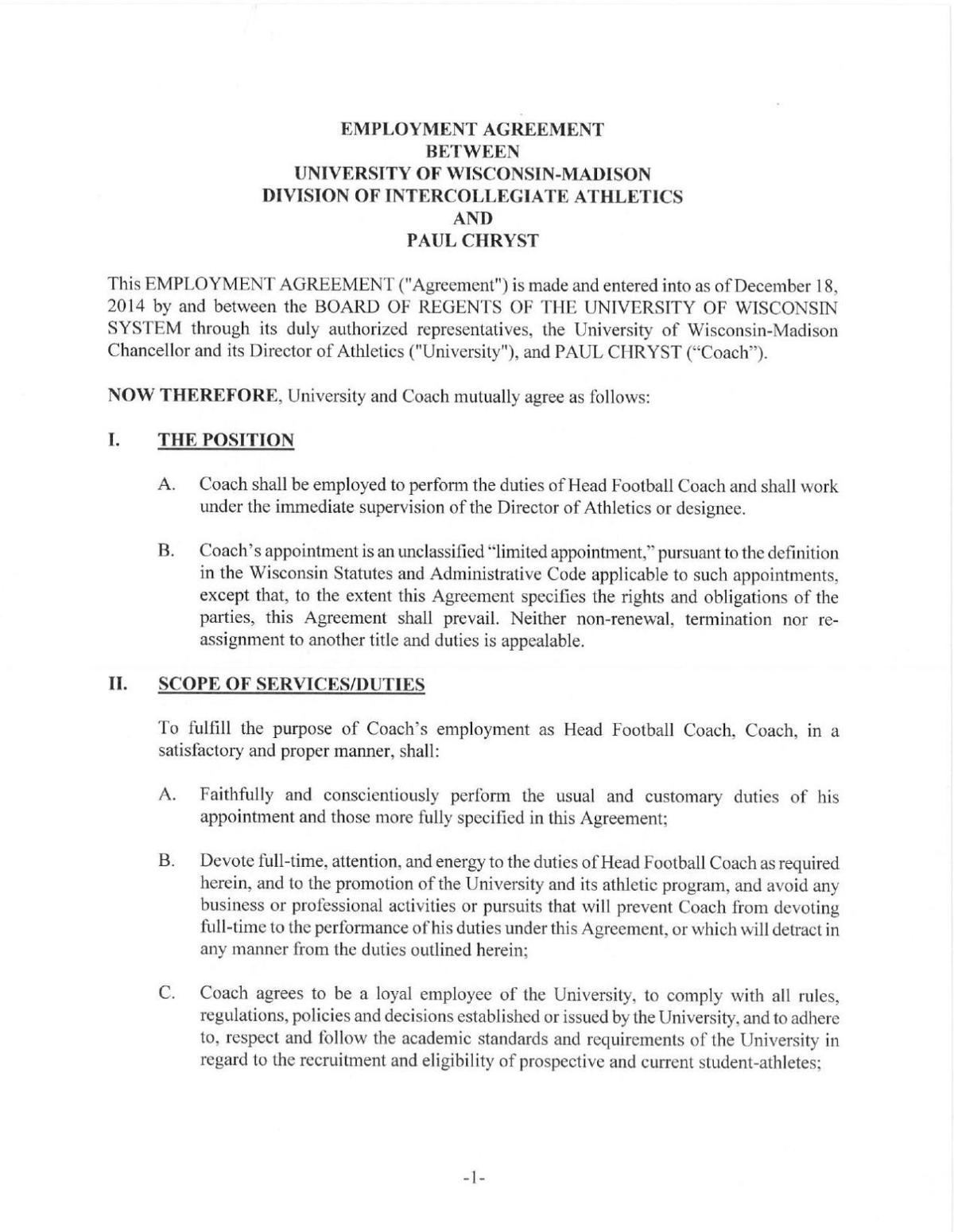 Graham Mertz says he's good, but Badgers know they must protect him better

Badgers QB Graham Mertz says he'll do everything he can to play this week after taking a hit to the chest and ribs against Michigan.

Former Badgers stars early in their NFL careers had big weekends, as did a few who have reached veteran status in the league. Here are some no…

Wisconsin football's upperclassmen are trying to avoid division in the locker room, something they saw a season ago.

Chris McIntosh says he wants Wisconsin to be a leader in what he called "historically dynamic period of time in college athletics." The Badgers athletic director talks about bigger picture issues now that he's been on the job 100 days.

Badgers AD Chris McIntosh on football struggles: 'We'll get through it and we'll be better for it'

Wisconsin athletic director Chris McIntosh reflected on his own playing career in discussing how the 1-3 Badgers can emerge from an early skid.

He is loud with his voice and his play on the football field, but he keeps to himself away from it.