The University of Wisconsin football program named Gary Brown, who has a history in the NFL as a coach and player, as its running backs coach.

Brown was the running backs coach for the Dallas Cowboys from 2013-19. He sat out last season while battling cancer, according to a story in the Fort Worth Star-Telegram.

“Gary is really an impressive person. Everyone I know that has worked with Gary speaks very highly of him and has loved working with him,” UW coach Paul Chryst said in a statement Thursday. “I look forward to our staff being able to work with him, and I’m really excited that our players will get to learn from him. He brings great experience at both the collegiate and professional level and is a heck of a good football coach.”

Brown also spent four seasons as an assistant with the Cleveland Browns prior to his time with the Cowboys.

“I’m excited about being part of the Badger family because of the tradition that’s been established over the years,” Brown said in a statement. “They’re one of the best programs in the Big Ten, and obviously they like to run the ball and run it very well. As a running backs coach, that certainly appealed to me. They’ve had a long line of great, great tailbacks and it’s an honor for me to contribute to carrying on that tradition.

“If you’re a running back guy, you’re very aware of what they’re doing at Wisconsin and you study their tape and their backs. In my work in the NFL, we’ve scouted them all. I’ve always been very impressed with how those guys go about their business and how they leave Wisconsin as truly complete tailbacks.”

Brown played at Penn State, leading the Nittany Lions in rushing as a sophomore in 1988. He went on to an eight-year NFL career that included a breakout season in 1993, when he rushed for 1,002 yards and six touchdowns in eight games with the Houston Oilers.

Brown’s other coaching stops include spending the 2006 season with the Green Bay Packers as part of the NFL Minority Coaching Fellowship program.

Brown inherits a running back room in transition.

Freshman Jalen Berger led the team in rushing last season and is likely to be the lead back, but there’s little experience behind him. Garrett Groshek, a reliable reserve over the past four seasons, is trying his hand at the NFL and Nakia Watson is in the transfer portal.

Dairyland dance: 20 players and coaches from Wisconsin in the NCAA men’s basketball tournament

Anderson, a 6-foot-3, 195-pound senior from Stevens Point, is averaging 3.4 points and 1.3 assists for the Badgers off the bench this season. Named Mr. Basketball and AP Player of the Year as a senior in 2016 after the Panthers repeated as Division 1 champions, Anderson attended UW-Green Bay before transferring to UW, redshirting in 2017-18 and suffering a season-ending knee injury in 2018-19. Ninth-seeded UW opens the tournament 6:10 p.m. Friday against No. 8 North Carolina in the South region.

Buss (above center), a 5-foot-11, 175-pound junior from Verona, has been held scoreless in the brief action he's seen in four games with the Eagles since transferring. No. 12 Winthrop opens the tournament 8:57 p.m. Friday against No. 5 Villanova in the South region.

Jonathan Davis, a 6-foot-5, 196-pound freshman from La Crosse, is averaging 7.0 points, 4.1 rebounds and 1.1 assists in his first season in Madison alongside his twin brother Jordan. Named Mr. Basketball in 2020, Jonathan Davis is Central’s all-time scoring leader with 2,158 points. Ninth-seeded UW opens the tournament 6:10 p.m. Friday against No. 8 North Carolina in the South region.

Jordan Davis, a 6-foot-4, 196-pound freshman from La Crosse, is averaging 0.5 points in 11 appearances since joining the Badgers with twin brother Jonathan. Ninth-seeded UW opens the tournament 6:10 p.m. Friday against No. 8 North Carolina in the South region.

Gilmore, a 6-foot-7, 215-pound freshman from Hartland Arrowhead, is a preferred walk-on at UW. Named AP first-team All-State and Classic 8 Conference Player of the Year as a senior in 2020, he is Arrowhead's career scoring leader with 1,565 points. Ninth-seeded UW opens the tournament 6:10 p.m. Friday against No. 8 North Carolina in the South region.

Graham (above right), a 6-foot-8, 205-pound freshman who led Glendale Nicolet to a 22-2 record in 2019-20, left Nicolet to enroll mid-year at Maryland on Dec. 27, 2020, and joined the team immediately. He's played in seven games for the Terrapins, averaging 1.4 points and 1.4 rebounds. Tenth-seeded Maryland opens the tournament 6:10 p.m. Saturday against No. 7 Connecticut in the East region.

Joey Hauser, a 6-foot-9, 220-pound junior from Stevens Point, is averaging 9.7 points and 5.7 rebounds for the Spartans — highlighted by a 27-point effort against UW on Christmas Day — since transferring from Marquette and sitting out the 2019-20 season. Michigan State opens the tournament 8:57 p.m. Thursday against UCLA in a First Four game, with a matchup against No. 6 BYU on the line in the East region.

Sam Hauser, a 6-foot-8, 218-pound senior who played at Stevens Point High School, is averaging 16.0 points, 6.7 rebounds and 1.8 assists for the Cavaliers this season after transferring from Marquette and redshirting in 2019-20. Fourth-seeded Virginia opens the tournament 6:15 p.m. Saturday against No. 13 Ohio in the West region.

McCabe, a 6-foot, 188-pound junior who earned Mr. Basketball and AP All-State Player of the Year honors at Kaukauna in 2018, is averaging 2.3 points, 1.2 rebounds and 1.6 assists per game this season for the Mountaineers. Third-seeded West Virginia opens the tournament 8:50 p.m. Friday against No. 14 Morehead State in the Midwest region.

Sibley (above left), a 6-foot-8, 200-pound freshman who played high school ball at Glendale Nicolet and then Oak Hill (Va.) Academy, is averaging 1.3 points and 1.0 rebound in 20 appearances for the Hoyas. No. 12 Georgetown opens the tournament 11:15 a.m. Saturday against No. 5 Colorado.

Williams, a 6-foot-5, 201-pound senior who played high school ball at Milwaukee Riverside, is averaging 6.4 points, 2.8 rebounds and 1.4 assists in 22 appearances, including 14 starts, for the Sooners this season. Eighth-seeded Oklahoma opens the tournament 6:25 p.m. Saturday against No. 9 Missouri in the West region.

Tony Bennett, son of former UW coach Dick Bennett, has won three national coach of the year awards while leading Virginia to a 277-96 record over 12 seasons. Fourth-seeded Virginia opens the tournament 6:15 p.m. Saturday against No. 13 Ohio in the West region.

Ellingson, a Sussex Hamilton graduate, played three years at the University of Iowa and earned second-team All-Missouri Valley Conference honors at Drake in 2018-19 before beginning to serve as a video coordinator for the Bulldogs last season. Drake faces Wichita in a First Four game 5:27 p.m. Thursday for the right to face sixth-seeded USC.

Gard, a native of Cobb in southern Wisconsin, has compiled a 118-69 record since taking over as Wisconsin’s head coach in 2015. Ninth-seeded UW opens the tournament 6:10 p.m. Friday against No. 8 North Carolina in the South region.

Moser, who graduated from UW-La Crosse in 1987, has coached in schools at all levels from the USA to China, including in the NBA with Sacramento, Orlando, Cleveland and the Los Angeles Lakers before being hired by Eric Musselman once again, this time with the Razorbacks. Third-seeded Arkansas opens the tournament 11:45 a.m. Friday against No. 14 Colgate.

Oats, a Watertown native who played Maranatha Baptist Academy High School from 1993-97, is 40-21 since taking over the Crimson Tide program in March 2019. Second-seeded Alabama opens the tournament 3 p.m. Saturday against No. 15 Iona in the East region.

Smart, who grew up in the Madison area and was a three-year starter at Oregon High School, is 109-85 since taking over the Texas program in 2015. Third-seeded Texas opens the tournament 8:50 p.m. Saturday against No. 14 Abilene Christian in the East region.

Soderberg, who grew up in Wausau and attended Stevens Point Pacelli High School, is in his fifth season at Virginia. Starting his college playing career at Ripon College before transferring to UW-Stevens Point and playing under Dick Bennett, Soderberg also joined former NBA star and coach Terry Porter to play in the 1984 NAIA national championship game and coached under Bennett at UW from 1995-2001. Fourth-seeded Virginia opens the tournament 6:15 p.m. Saturday against No. 13 Ohio in the West region.

Swartz (above left), a three-time Associated Press All-State player at Waukesha South and 1999 state player of the year, played on UW's 2000 Final Four team but left the program due to issues connected with obsessive-compulsive disorder and earned his degree from Carroll College in 2005. He has been with Georgia Tech since 2016 and has served as an assistant coach since 2018. Ninth-seeded Georgia Tech opens the tournament 3 p.m. Friday against Loyola Chicago in the Midwest region.

Colten Bartholomew contributed to this report.

Packages for all seven home games start at $378 per ticket and will be limited at first to donors and those who ordered 2020 season ticket packages but weren’t able to use them due to the pandemic.

The NCAA Division I Council plans to vote in April on lifting the ban on in-person recruiting that has been in place for more than a year because of the COVID-19 pandemic.

Final details regarding the foundation’s scholarships are still being ironed out, but one will be for a student wanting to attend the University of Wisconsin.

Losing running backs coach John Settle continues an offseason of upheaval on the Badgers’ staff, which has lost three assistants since winning the Duke’s Mayo Bowl on Dec. 30.

“Honestly, a lot went into my decision. If I would have finished the season, I would have still left after my junior season,” Rachad Wildgoose told reporters Wednesday at UW’s Pro Day.

Former UW tackle Cole Van Lanen said he’s spoken with teams about playing guard or even center, positions where his wingspan isn’t as important and he can use his power and run-blocking ability.

Badgers roster breakdown: Backfield has been bolstered by new additions but staying healthy will be key

In the second part of our position-by-position preview series, UW linebacker Noah Burks discusses this year's backfield as we take an in-depth look at the running backs and fullbacks. 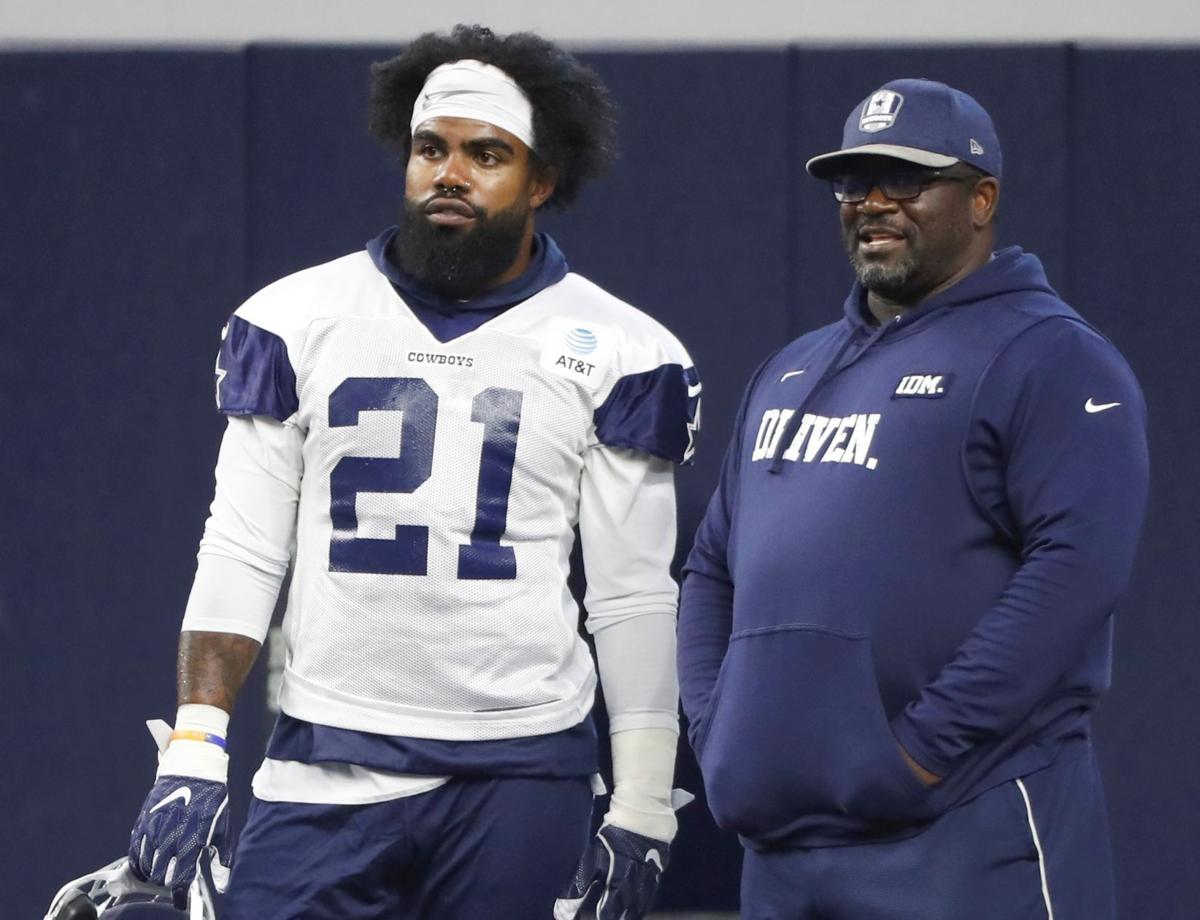 Cowboys running backs coach Gary Brown, talking with Ezekiel Elliott in 2019, was an eighth-round pick out of Penn State by the Houston Oilers in the 1991 NFL draft. 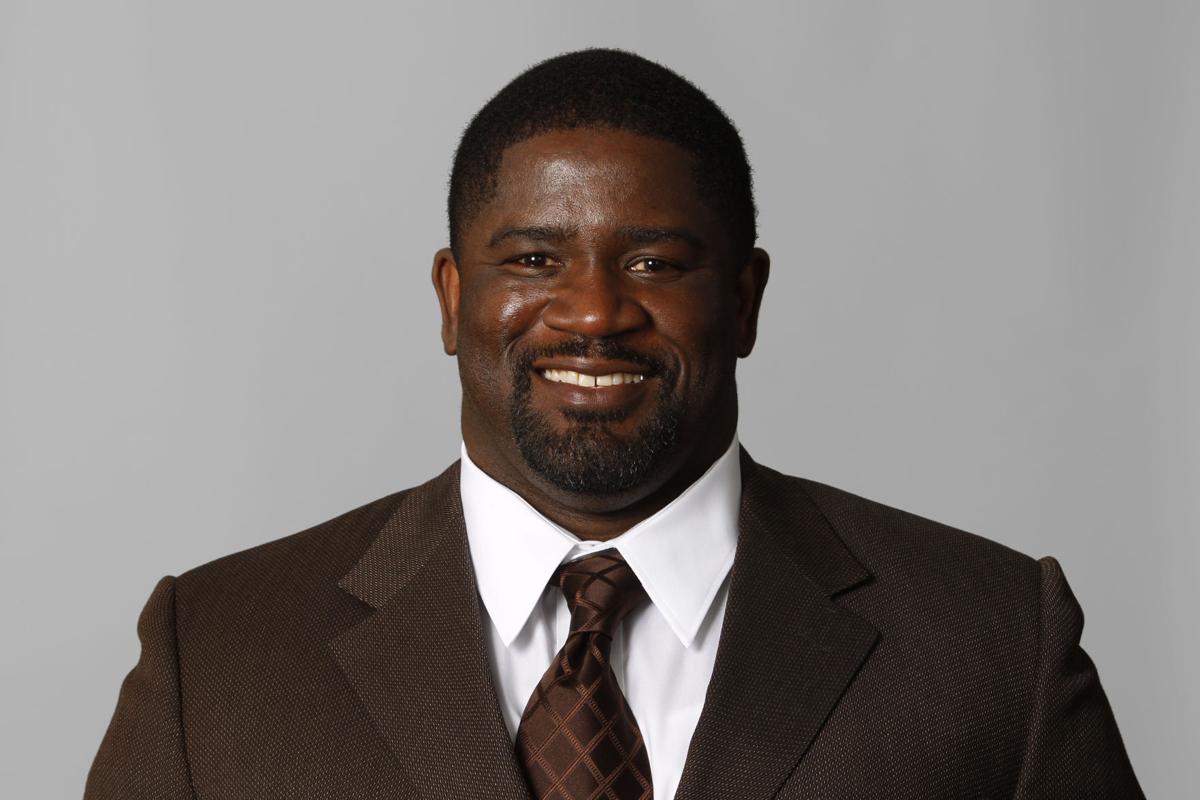