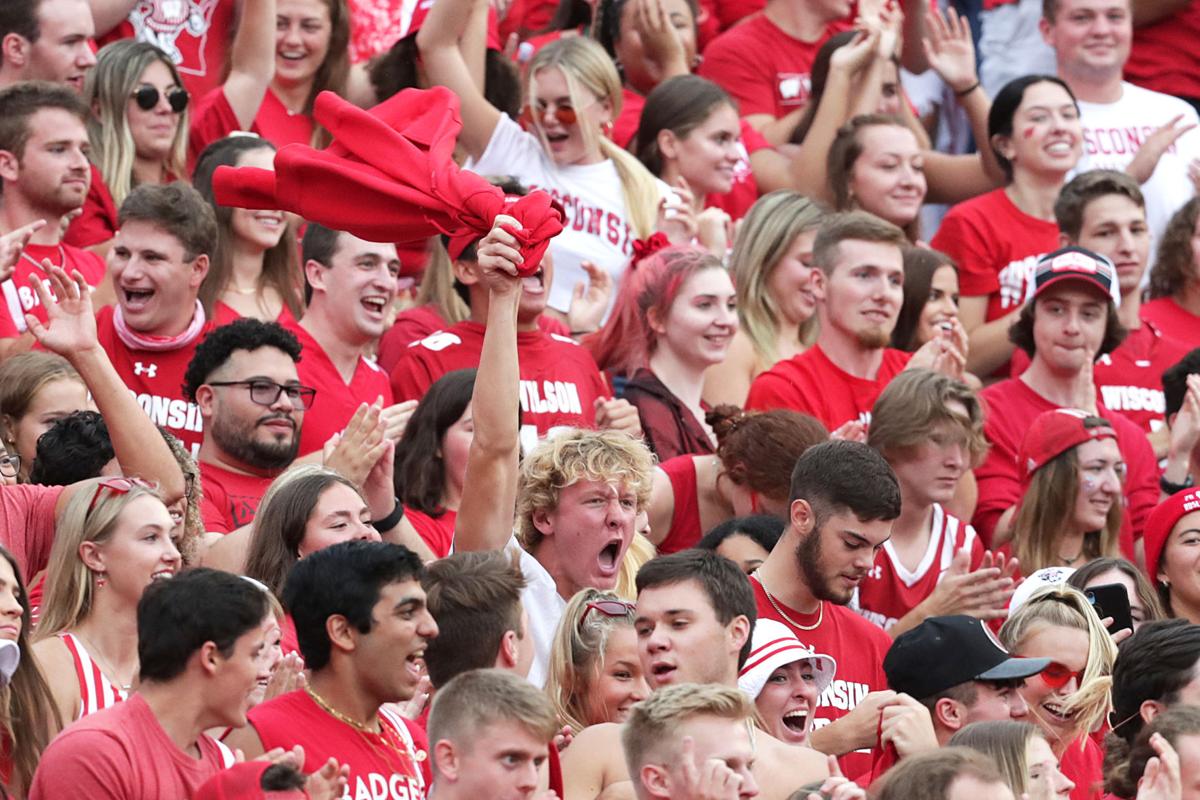 A fan in the student section waves a shirt over his head as he cheers for the Badgers at last weekend's Penn State game at Camp Randall. Fans complained about long lines and a lack of mask-wearing on concourses at the game. 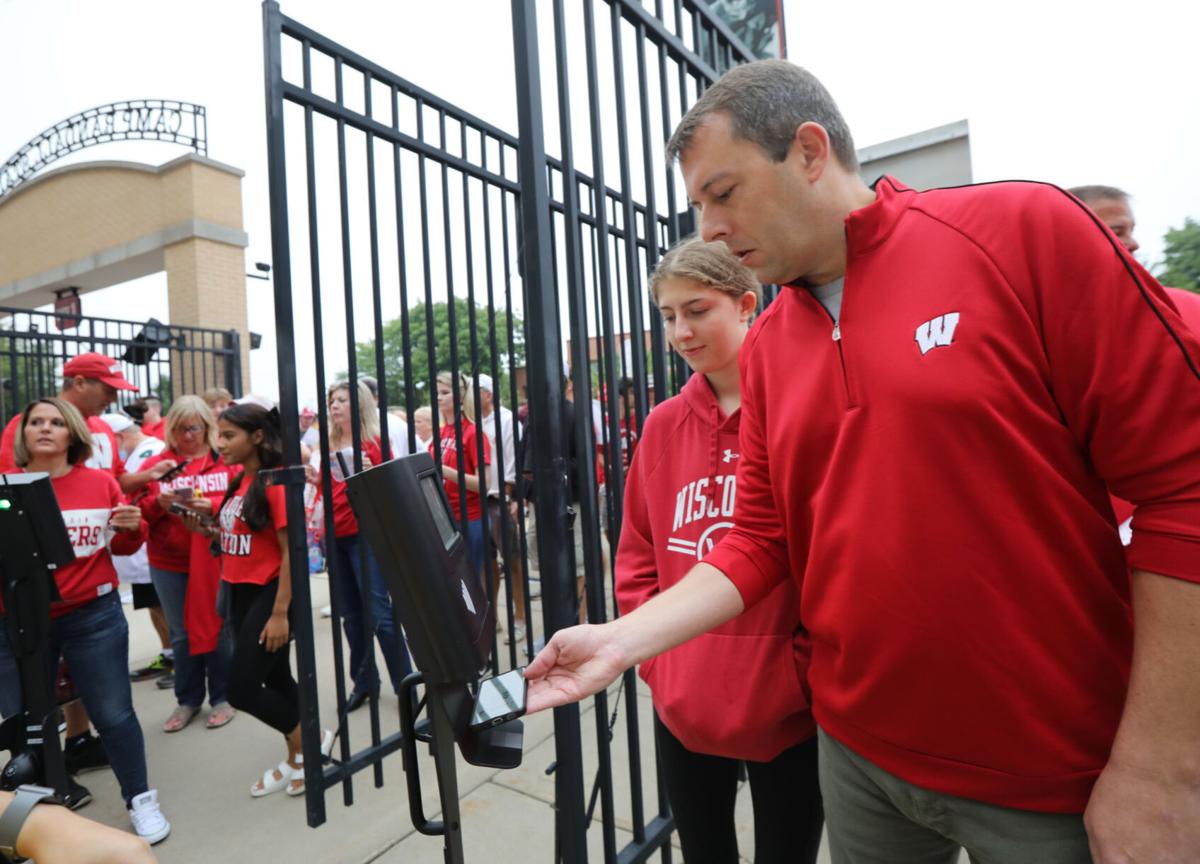 Jason Adamany, of Fitchburg, with his daughter, Ava, scans their tickets to get into Camp Randall Stadium for the Wisconsin football season opener against Penn State.

Fans returned to Camp Randall Stadium last weekend and so did complaints about long lines at concession stands and crowded walkways.

The wait times to buy food and drink were longer than normal, fans reported, while more than a third of the stadium’s vending locations were closed amid a staffing shortage.

The queue at a stand outside Section II in the upper deck was “the longest that I have ever seen until the fourth quarter,” said Rick Kalson, who has held season tickets since 2003.

Badgers officials are hoping that more concessions locations will be open for Saturday’s game against Eastern Michigan, but it depends on how many people UW can add to its game-day staff before then.

“There were long lines, but we were pleased with the efficiency of transactions,” said Brian Lucas, UW’s director of football brand communications.

The delays weren’t attributable to food preparation problems or this year’s move to cashless transactions, Lucas said. “It was simply the number of spots we had open,” he said.

Only 28 of 43 concessions locations were open for the 16-10 loss to Penn State, including 19 of 26 permanent stands. It was the first football game with fans at Camp Randall since November 2019. UW home games in 2020 were closed to the public because of the pandemic.

UW administrators said before the opener that there would be challenges for concessions sales because of a shortage of game-day workers. A decrease in the number of nonprofit groups signing up to work at the stadium in exchange for a commission for their organizations is partially behind the smaller number of workers.

“We definitely appreciate the fans’ understanding and patience as we continue to build our team back up,” Lucas said, “because we know the concessions experience is a really important part of game day and it’s a priority for us to continue to improve in that area and provide the best service possible.”

UW again is planning to allow fans to bring in an unopened bottle of water this week to help alleviate concessions waits. Water is the biggest seller at football games, Lucas said.

Some of those who attended last Saturday’s game said they either skipped the concessions because of the lines or had to wait for nearly an entire quarter. People were also concerned that people weren’t wearing masks in the cramped quarters of the concourses.

Season ticket holder Jim Bartlett said he was so bothered by walking shoulder to shoulder with unmasked fans through the concourses after the game that he’s not planning on using his tickets this week.

“We’ll see what the COVID situation is” by the next home game Oct. 2 against Michigan, Bartlett said.

UW-Madison senior Garrett Prem said the packed hallways to get from entry gates to the student sections were troublesome.

“In a normal year I wouldn’t be that upset by it,” Prem said. “But the fact that the university touted that there would be policies in place to limit the spread of COVID-19 actually made it laughable. I don’t think I saw more than a handful of people wearing masks in the hallways of the stadium.”

UW is recommending fans wear a mask in outdoor common areas like the seating bowl, concourses and entry gates but isn’t requiring it. Masks are mandatory in Camp Randall’s indoor areas.

A new gate entry process where fans use self-service pedestals to scan a bar code on their phone or a printed ticket drew satisfactory grades from fans. An problem with the stadium Wi-Fi that limited signal for some fans last Saturday has been identified and fixed, Lucas said.

He said UW appreciated that fans took to heart pregame messaging about the new entry procedure and arrived early. Even the students, often maligned for large empty sections early in games, had 70% through the gates at kickoff last week, Lucas said. That’s 8,800 fans, the largest number of students in the stadium at kickoff for an 11 a.m. game since UW started tracking that stat in 2009.

Now comes a 6 p.m. start against Eastern Michigan on Saturday. Lucas said night games are typically better attended regardless of the opponent and fans arrive earlier than they do for daytime contests.

UW is planning a flyover during the national anthem after rolling out pregame pyrotechnics last week in an attempt to entice fans to get to the stadium early.

The Badgers defense needs a strong pass rush. Here's a look at how they did it in the opener.

It’s a good thing the Badgers football game doesn’t kick off until 6 p.m. Saturday as southern Wisconsin will see highs approaching 90, according to forecasters.

Around 90% of Badgers athletes are vaccinated against COVID-19, official says

Michael Moll, UW's assistant athletic director for sports medicine, told the Athletic Board that the level of vaccinated individuals in the department mirrors that of the campus population as a whole.

Whether you are heading down to Camp Randall or watching from the comfort of your couch, the State Journal has Badgers fans covered with a breakdown of everything they need to know as Wisconsin battles the 14th-ranked Michigan Wolverines on Saturday.

A fan in the student section waves a shirt over his head as he cheers for the Badgers at last weekend's Penn State game at Camp Randall. Fans complained about long lines and a lack of mask-wearing on concourses at the game.

Jason Adamany, of Fitchburg, with his daughter, Ava, scans their tickets to get into Camp Randall Stadium for the Wisconsin football season opener against Penn State.