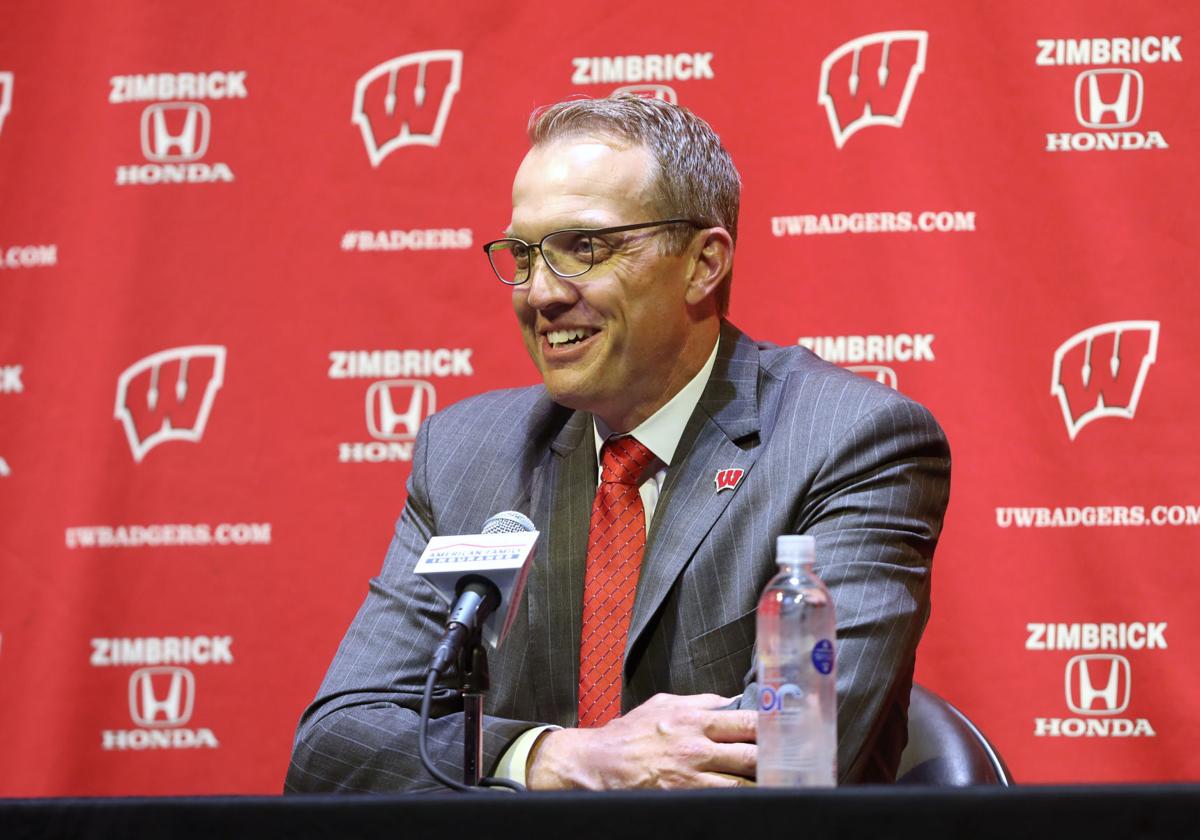 Chris McIntosh, the new UW athletic director, answers questions from the media at the Kohl Center on June 2. 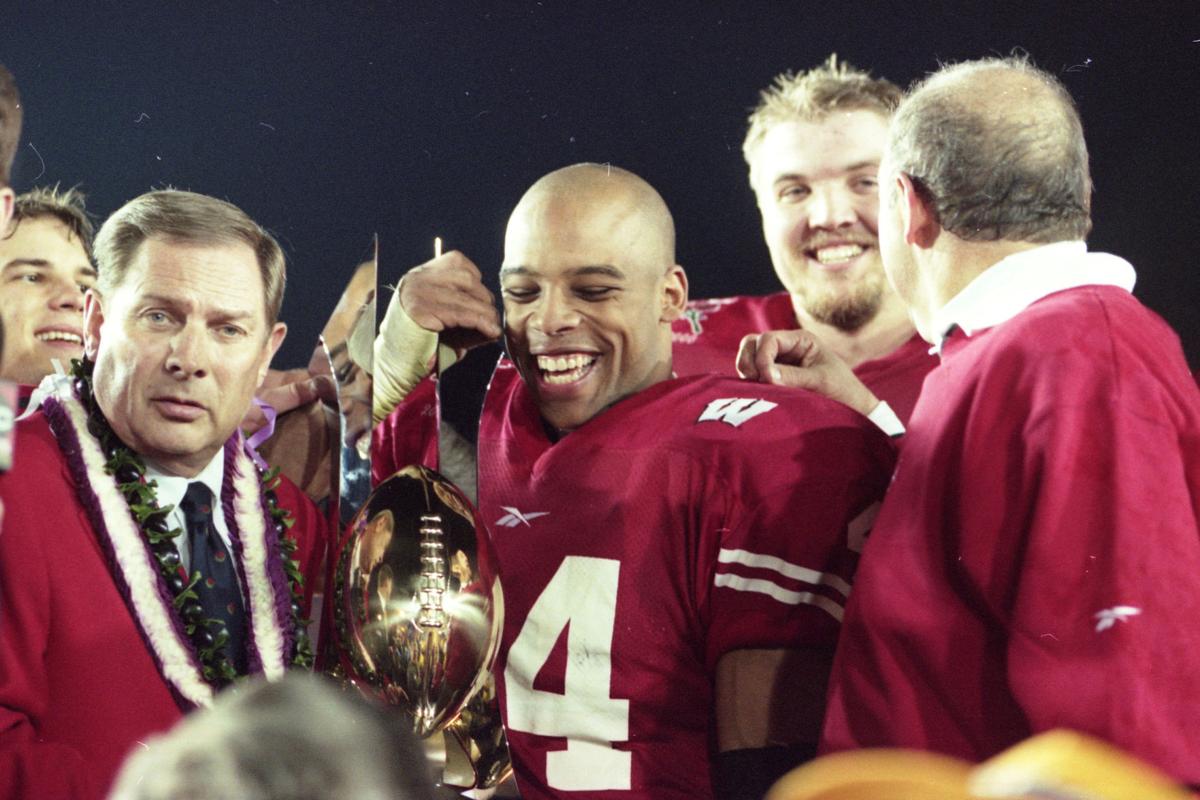 Linebacker Donnel Thompson (44) and tackle Chris McIntosh are all smiles as they talk with coach Barry Alvarez following UW's 17-9 victory over Stanford in the Rose Bowl on Jan. 1, 2000.

To better understand the relationship between outgoing University of Wisconsin athletic director Barry Alvarez and his successor, it’s important to go back to the beginning.

Chris McIntosh was a highly regarded offensive lineman out of Pewaukee during the summer of 1994. He went to the Badgers’ camp, quickly established himself as one of their primary instate targets and received a scholarship offer. McIntosh says he felt like he still was walking on clouds when Alvarez showed up at his house about a week later in what clearly was an attempt to seal the deal and walk out of there with an oral commitment.

McIntosh was trying to make an informed decision but admits, all these years later, he was what’s known in the recruiting world as a heavy lean toward the Badgers at that point. Still, he had a valid question for Alvarez: What’s the benefit of committing now?

It was probably a question Alvarez had heard hundreds of times by that point of his coaching career — and he had an answer at the ready. Alvarez said if McIntosh pledged his allegiance and later got injured, UW would honor the scholarship.

McIntosh eventually committed and, sure enough, he tore his ACL three games into his senior season. He ended up getting a staph infection after surgery and doctors feared at one point that he might lose his leg. Three months of self-administered IV antibiotics helped prevent that, but McIntosh ended up having four surgeries in all and lost 45 pounds.

The legend of Barry Alvarez started where he’s from. On his final day as Wisconsin’s AD, where will he go now?

The ordeal was painful and stressful for McIntosh and his family. But he was among the players who had signed letters of intent when UW announced its 1995 recruiting class that winter.

“He stayed true to that commitment when the reality of the circumstances probably dictated that he shouldn’t have,” McIntosh said about Alvarez. “There was a happy ending.”

A really happy one for McIntosh, as it turns out. Alvarez now officially is retired from UW and Thursday marks his hand-picked choice’s first day as the athletic director at his alma mater. It’s a relationship that began 27 summers ago and is built on loyalty and one other thing that is important to Alvarez.

“It goes back to trust,” Alvarez said this week. “I told him something and I followed through with it. You build trust that way.”

When McIntosh officially was announced as Alvarez’s replacement June 2, I asked the latter what convinced him to groom his former player for the job in the first place. Alvarez said he liked that McIntosh had ideas and wasn’t afraid to share them.

That quality dates to McIntosh’s days as a two-time captain for the Badgers, an All-American left tackle who was one of the key blockers for Ron Dayne on his run to winning the Heisman Trophy in 1999.

McIntosh was one of the leaders on teams that won back-to-back Big Ten titles and Rose Bowl championships. At some point during that stretch — McIntosh doesn’t remember all of the specific details — he felt the need to approach Alvarez with a gripe.

The players felt Alvarez was wearing them out with demanding practices. On one hand, McIntosh felt like he was violating some agreement he’d made during the recruiting process; UW coaches had made it clear hard work was one of the pillars of the program, and McIntosh had signed up for it.

But it also was his duty as a captain to be Alvarez’s eyes and ears in the locker room, a voice for his teammates. So as nervous as he was about angering Alvarez, McIntosh bit the bullet, went to his office and spoke up.

Alvarez listened to an opinion he trusted and agreed to modify practices. Their relationship took another step forward.

It now is McIntosh’s turn to make the big decisions, to delegate responsibility to his staff, to trust others’ opinions. While McIntosh doesn’t have the charisma that oozes out of Alvarez, he still can be a successful leader and pick up where Alvarez left off.

There are massive shoes to fill at a time of great change in college athletics. McIntosh officially takes over on the same day student-athletes will be allowed to benefit from their name, image and likeness. There’s a transfer epidemic and the NCAA has made it easier for players to switch schools. And, oh yeah, UW and other athletic departments still are feeling the effects of the COVID-19 pandemic while finalizing plans to return to full capacity in their venues.

There’s a lot on McIntosh’s plate, a lot of questions to be answered about his philosophy and plan moving forward on a variety of issues. He declined a recent interview request from the State Journal to discuss forward-facing issues, saying he wanted to wait until Alvarez had moved along and the transition officially was complete.

That’s a story for another day. This week, I couldn’t help thinking back to when I first realized the bond between Alvarez and McIntosh felt different from most player-coach relationships. I was out in California to cover the 2000 Rose Bowl and Alvarez was holding court at the Los Angeles Coliseum on the day after Christmas.

Alvarez didn’t hesitate when he was asked who he’d want to protect him in case there were any Y2K issues — kids, look it up — later in the week.

Duh, I thought to myself. McIntosh was 6-foot-7, 310 pounds at the time and was an obvious choice as a personal protector.

I now see it was much more than that. That moment came more than five years after Alvarez had kept his word to McIntosh, the start of a bond built on trust and loyalty.

“For me,” McIntosh said about Alvarez keeping his scholarship promise, “that was a powerful way to start a relationship with somebody.”

Big shoes to fill: Look back at Wisconsin athletic directors through the years

Jim Polzin: Even in a different role, Frank Kaminsky is still the life of the party

“You know me,” said former UW star Frank Kaminsky, now a bench player for the NBA Finals-bound Phoenix Suns. “I know how to celebrate.”

The Badgers chancellor will serve a two-year term as the chair of the conference's top decision-making body.

Khalif received a pay raise of nearly 50% when he left the University of Wisconsin football program to join Michigan State’s.

Wisconsin has an NIL policy: Here are the do's and don'ts for Badger athletes

UW athletic director Chris McIntosh says Badgers athletes will be educated on name, image and likeness opportunities, but they must stay informed on rules and stay within them.

Brown, a defensive back from Johnston City, Illinois, picked Wisconsin over Illinois and Northwestern.

Barry Alvarez cashed in more than $300,000 from banked vacation time over 31 years with the Badgers and collected a larger payout from an additional compensation agreement.

After Whitefish Bay's Joe Brunner committed to UW, the Badgers have landed the top players in the state for the past six recruiting cycles.

The NCAA's decision to allow athletes to cash in arrived July 1 with a few restrictions and even less guidance.

Alvarez will work with the league on football matters including possible expansion of the league and the College Football Playoff.

Jim Polzin: Andrea Nelson's extended boxing family has helped her just as much as she’s helped them

The sport helped Nelson turn around her life to the point where she’s now making an impact on the boxers she coaches — just as they continue to stand in her corner.

Chris McIntosh, the new UW athletic director, answers questions from the media at the Kohl Center on June 2.

Linebacker Donnel Thompson (44) and tackle Chris McIntosh are all smiles as they talk with coach Barry Alvarez following UW's 17-9 victory over Stanford in the Rose Bowl on Jan. 1, 2000.