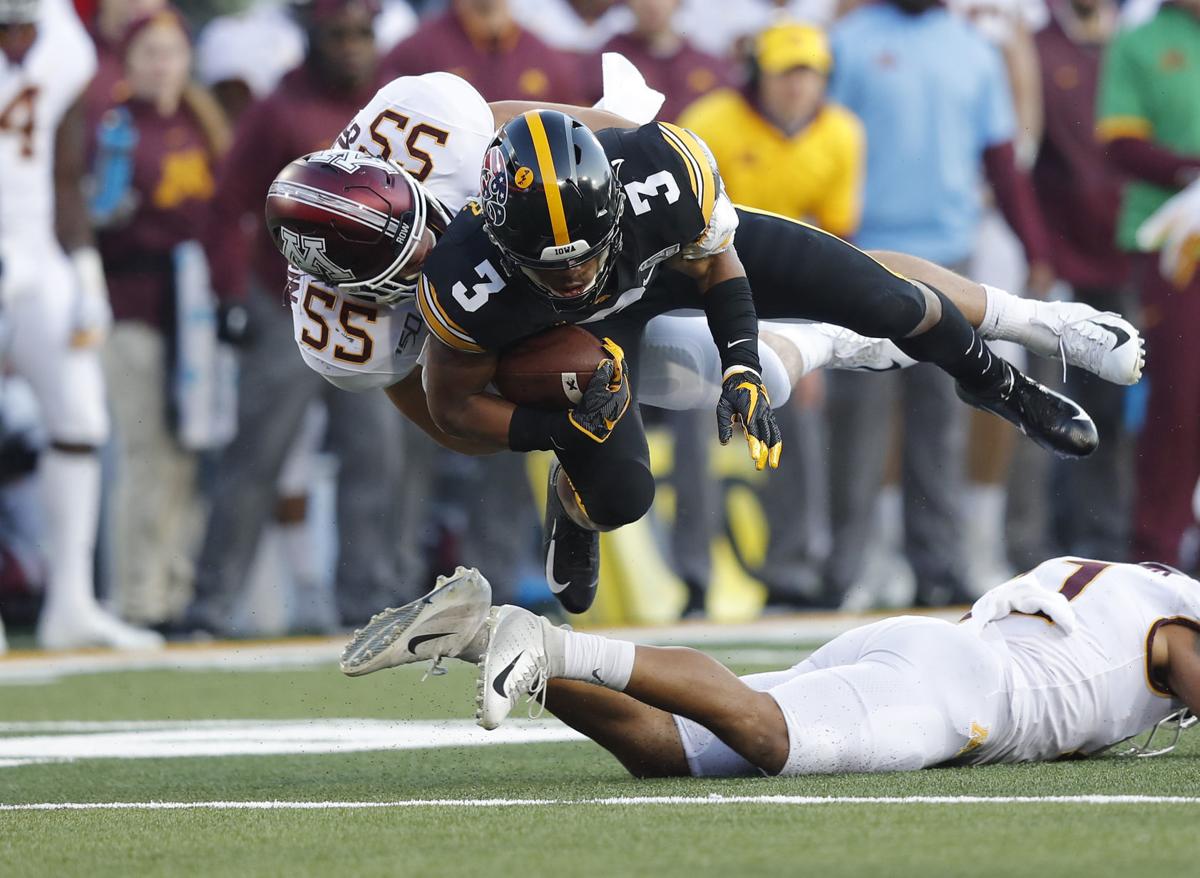 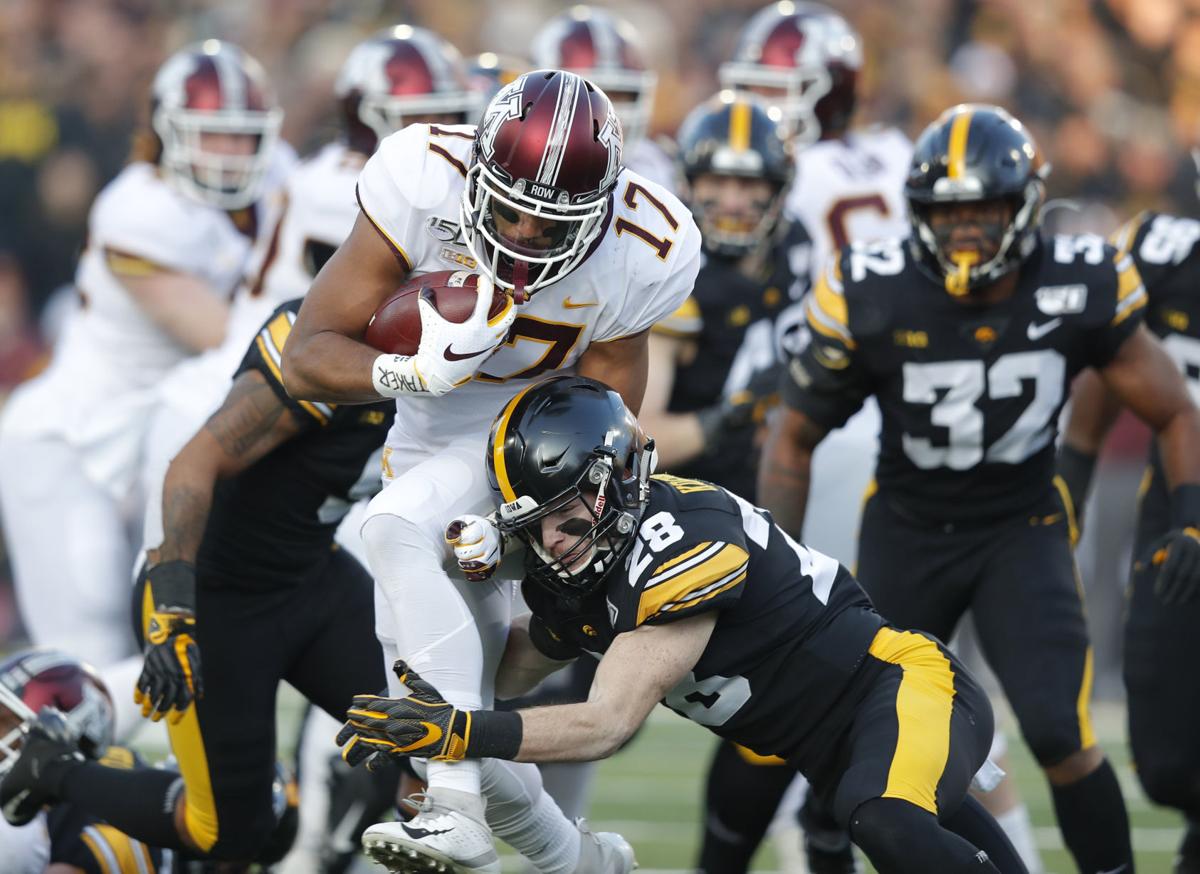 Minnesota wide receiver Seth Green (17), left, runs the ball as he is tackled by Iowa defensive back Jack Koerner during the first half of an NCAA college football game, Saturday, Nov. 16, 2019, in Iowa City, Iowa. (AP Photo/Matthew Putney) 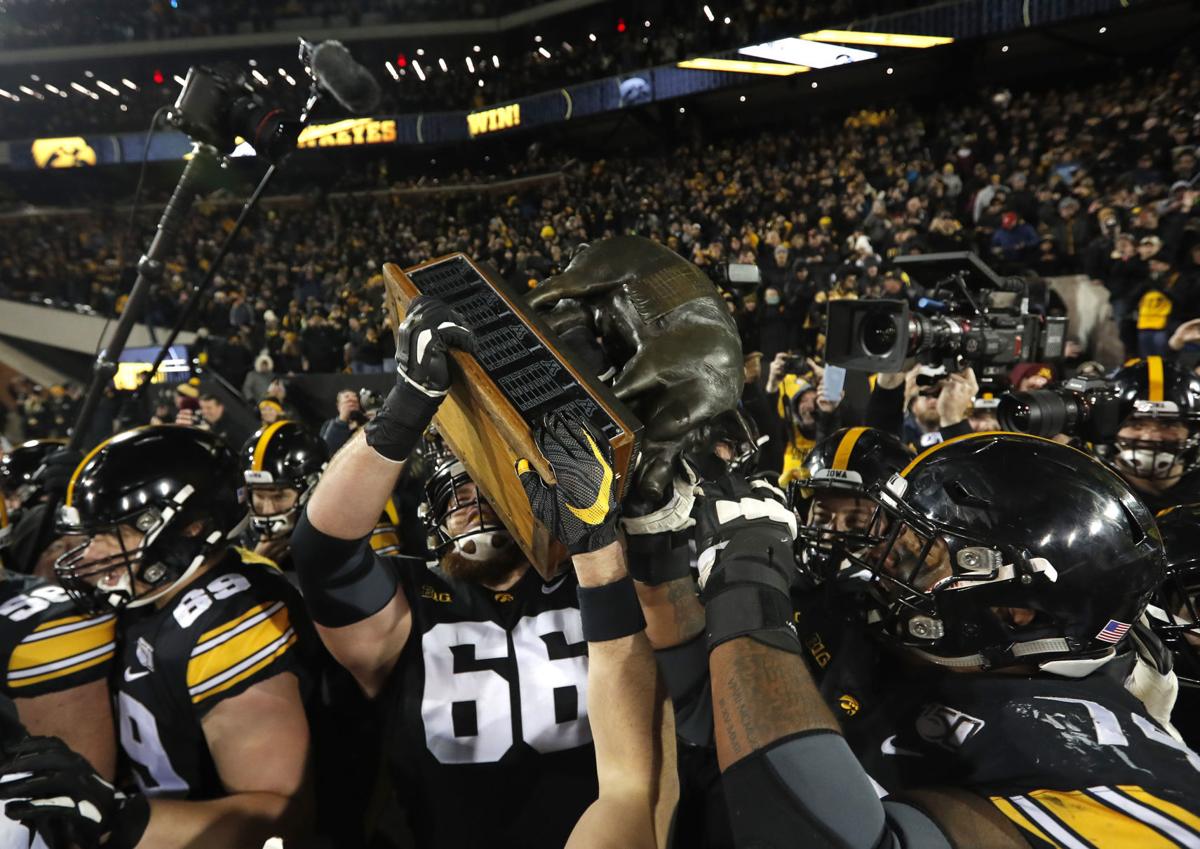 Iowa carries off the Floyd of Rosedale Trophy off the field while surrounded by fans after defeating Minnesota in an NCAA college football game, Saturday, Nov. 16, 2019, in Iowa City, Iowa.(AP Photo/Matthew Putney)

IOWA CITY, Iowa — Minnesota’s undefeated season came to an end in a place where the Gophers have struggled for a while.

The Gophers (9-1, 6-1, No. 8 CFP) haven’t won at Kinnick Stadium since 1999, losing nine straight on the road in the series. The loss will hurt them in the rankings, but they stay in control of their own fate in the Big Ten West Division race.

That, coach P.J. Fleck said, is something his team needs to remember.

“This is one game,” Fleck said. “Everything else is sitting right in front of us. If we can play a game that poorly, we can come back from it.

“This is not the end of the world. It hurts. It should hurt — it’s a rivalry game. This is what college football is all about. ... This is one game. That’s all that means.”

Minnesota plays at Northwestern next week and closes the season at home against Wisconsin, the second-place team in the division. The Badgers are one game behind the Gophers, and if Wisconsin beats Purdue and Minnesota the Badgers would win the Big Ten West.

The Hawkeyes (7-3, 4-3) struck quickly, scoring touchdowns on their first three possessions, then held off Minnesota’s charge in the second half for their first victory over a ranked opponent this season.

“We did a great job of controlling the first half,” Iowa coach Kirk Ferentz said. “We knew we were going to have to score some points today. It’s no mirage how many points they’ve scored, the yards that they’ve had.”

“We had to open it up,” said wide receiver Nico Ragaini, who scored Iowa’s first touchdown on a 21-yard pass from Stanley.

“Defensively, we started too slow,” Minnesota linebacker Thomas Barber said. “You can’t do that in a Big Ten game.”

Minnesota got to 23-19 with 3:27 to play when Rodney Smith scored on a 1-yard dive. But Brock Walker’s extra-point attempt missed. Iowa’s Nate Wieting then recovered the onside kick.

The Gophers had a final chance. But quarterback Tanner Morgan was sacked by Joe Evans and A.J. Epenesa on back-to-back plays, then backup Cole Kramer’s pass was intercepted by Riley Moss on fourth down.

Morgan threw for 368 yards. Tyler Johnson had nine catches for 170 yards. The Gophers had 431 yards of offense.

“The biggest accomplishment there is we kept them out of the end zone,” Ferentz said.

This was the Hawkeyes’ fifth home win on Oct. 30 or late over a team with serious national title aspirations since 2008. The Hawkeyes talked all week about not having any pressure with their division hopes.

Minnesota rose 12 spots after beating Penn State a week ago. The Gophers will tumble, but it likely won’t be as dramatic as last week’s surge. As for Iowa, it should expect to move up at least three or four spots.

Morgan was injured on the sack by Epenesa on the final drive. Fleck said he was “wobbly” when he left the field.

Fleck was called for an unsportsmanlike conduct penalty in the fourth quarter after a fourth-down incompletion.

Johnson dropped a pass inside the Iowa 10-yard line for an incompletion. As Johnson came up from the turf, he was knocked down by Iowa’s Dane Belton, who was flagged for unsportsmanlike conduct.

But Fleck was given the same penalty because he ran out on the field. Fleck said he was concerned about Johnson, who was down on the field after the hit from Belton.

“I was told I ran onto the field too fast,” Fleck said. “I get that. But I didn’t know there was a red light or a green light for when we could go onto the field.”

Minnesota: At Northwestern on Nov. 23

Tua Tagovailoa, the quarterback who was a national championship game MVP and Heisman Trophy candidate before he ever started a game at Alabama, will probably never take another snap for the Tide.

Minnesota wide receiver Seth Green (17), left, runs the ball as he is tackled by Iowa defensive back Jack Koerner during the first half of an NCAA college football game, Saturday, Nov. 16, 2019, in Iowa City, Iowa. (AP Photo/Matthew Putney)

Iowa carries off the Floyd of Rosedale Trophy off the field while surrounded by fans after defeating Minnesota in an NCAA college football game, Saturday, Nov. 16, 2019, in Iowa City, Iowa.(AP Photo/Matthew Putney)