Hunter Wohler had only dreamed of running out of the tunnel at Camp Randall Stadium before Saturday.

Flanked by the school’s spirit teams, with smoke all around him and the screams of the more than 76,000 fans in attendance, the freshman safety finally felt what it’s like to be a University of Wisconsin football player.

The 16-10 loss to Penn State was the first time two classes of UW football players experienced playing in front of fans on their home field. It stirred up emotions and childhood dreams, a moment many said they won’t forget.

“You see it on TV,” Wohler said. “You dream about that as a kid growing up, just being able to run out of the tunnel as a college player and come out on the field in front of fans like that. That’s the best way to spend a Saturday, running out of the tunnel at Camp Randall.”

For Jack Nelson the march through Camp Randall Memorial Arch was more momentous. As he stepped off the bus, the 6-foot-7 redshirt freshman lineman looked around for his dad and school alum Todd Nelson.

He recalled the moment with a smile on his face. Todd, a former UW lineman, pushed his way to the front of the fans crowded around the team. He gave Nelson a fist bump and sent him on his way.

Once they were on the field, the emotions continued. Nelson, a Stoughton product, said he could feel the energy of the fans even during warmups — the offensive line warms up close to the student section, so they were hard to ignore.

He said there was a sense of positivity running through the stadium before the game started. The student section filled during the first quarter.

Fans were decked out in red and white, forming a striped pattern in the stands. Staying focused on the game while experiencing their first true Camp Randall game day was a challenge.

“I was nervous because I cared a lot about my performance, my team’s performance,” Nelson said. “I wouldn’t say it was overwhelming or anything like that because there was a strange sense of peace. I knew that was exactly where I needed to be at that moment.”

Having Camp Randall packed with loud fans also was an adjustment for the defense after a year of silent stadiums.

UW defensive coordinator Jim Leonhard said last week he knew the defense would have to communicate more through hand signals than vocally, and miscommunications between cornerbacks and safeties led to three big plays for Penn State in the loss.

Nelson remembered a play on the goal line where the excitement was so much it made it hard to hear anything. He said it added another layer of stress to the energy of his first game.

Senior cornerback Faion Hicks said the defense had to get used to screaming to one another and signaling quickly against Penn State’s up-tempo attack. But having the crowd also added the layers of energy and excitement missing last season.

“It was good to have fans,” senior safety Scott Nelson said. “We want that problem. On third down, we want those issues … if it’s loud out there, we’re doing our job. We’ve just got to be able to communicate and just execute that.”

During some of the more iconic fan moments, some of the freshmen said they were just trying to take it all in.

Wohler said he joined in the fans’ singing of “Build Me Up Buttercup.” It’s a moment Wohler, a Muskego native, said he had been looking forward to since he first experienced it as a fan.

The “Jump Around” after the third quarter even had freshman Braelon Allen of Fond du Lac off his feet joining in on the fun.

“I was jumping around a little bit,” Allen said “I’m not a big dancer or (anything) like that. My first time out there I had to participate a little bit. I mean, just being surrounded by everyone like that. I’m just kind of in the middle of this, it’s unreal. The field is shaking underneath you.”

Watch now: Badgers cornerback Faion Hicks talks about having his family in the stands

Watch now: Danny Davis shares what he told Graham Mertz during a loss to Penn State

University of Wisconsin wide receiver Danny Davis meets the media after the Badgers' 16-10 loss to Penn State on Saturday, Sept. 4, 2021.

The Wisconsin Badgers take on Penn State Nittany Lions in their home opener at Camp Randall Stadium in Madison on Saturday, Sept. 4, 2021.

The UW football team needs Graham Mertz to be better, and in a hurry. “I know I can play a lot better football," the QB said after Saturday's loss. "I know we’re a lot better team than that.”

Watch now: What Penn State QB Sean Clifford had to say to Wisconsin corner after win

A few strong storms with gusty winds and hail may occur mainly east of a Fond du Lac to Lake Geneva line, according to forecasters.

Alcohol was a factor in a cooking fire Friday night at a Far West Side apartment that resulted in a resident being taken to a hospital, the Madison Fire Department reported.

"It was amazing watching it fall from the sky," Russ Smith said. "Words can’t describe what it looked like."

No. 16 UCLA, No. 19 Virginia Tech, No. 20 Mississippi and No. 25 Auburn moved into the AP Top 25, but history is littered with teams that made brief, early season appearances in the poll only to fade away.

The Badgers defense needs a strong pass rush. Here's a look at how they did it in the opener.

Mike Maskalunas walked on to the Badgers football team. It's been a long road to his second consecutive start Saturday against Eastern Michigan. 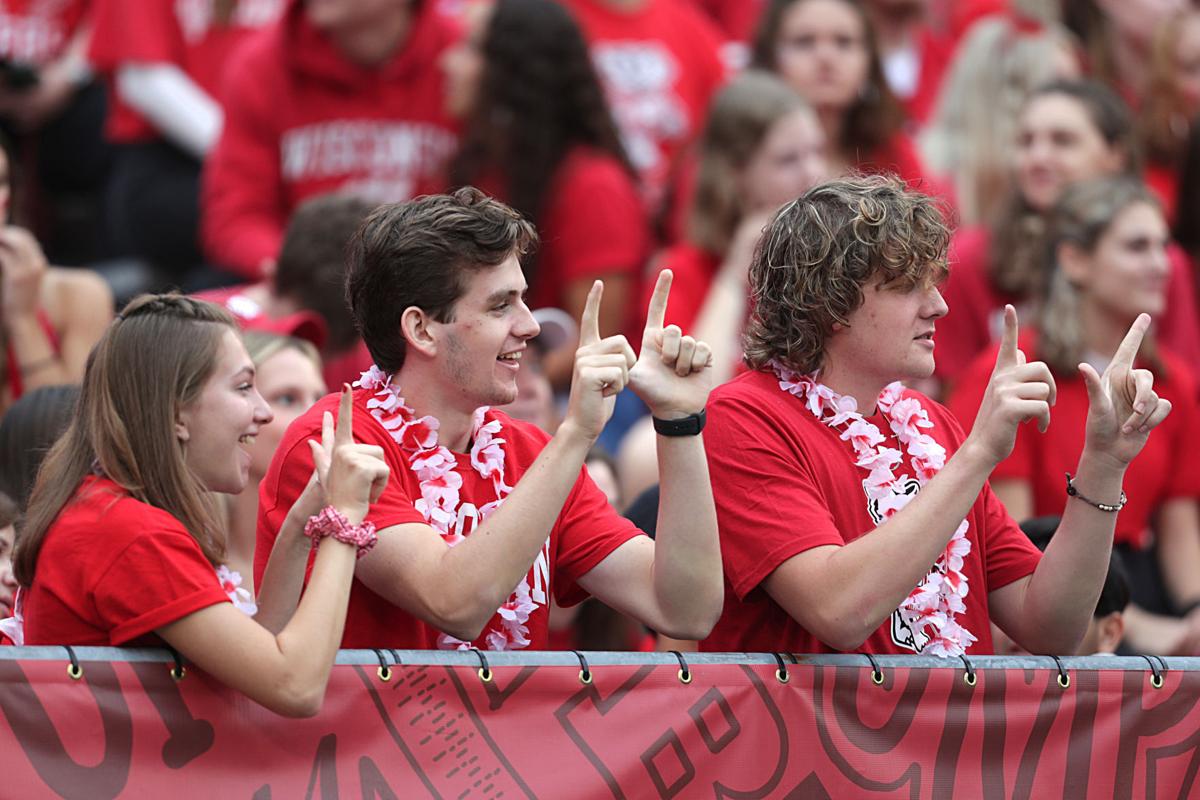 UW fans cheer as players run onto the field Saturday prior to the 16-10 season-opening loss to Penn State.