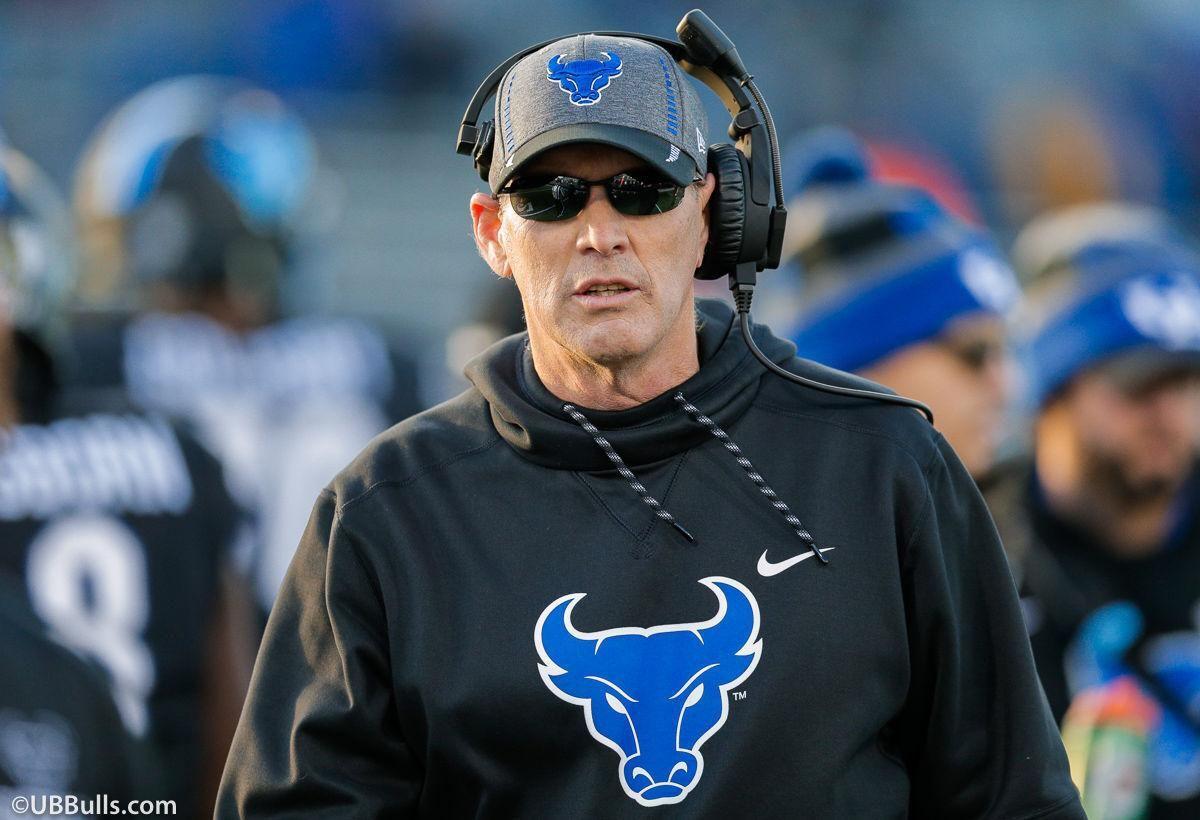 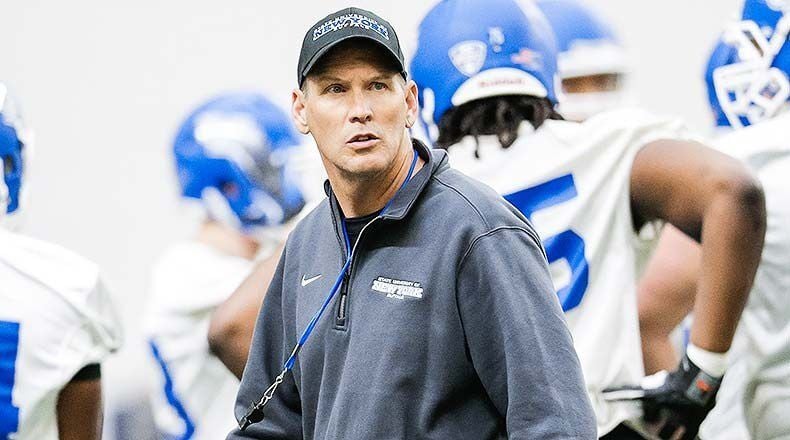 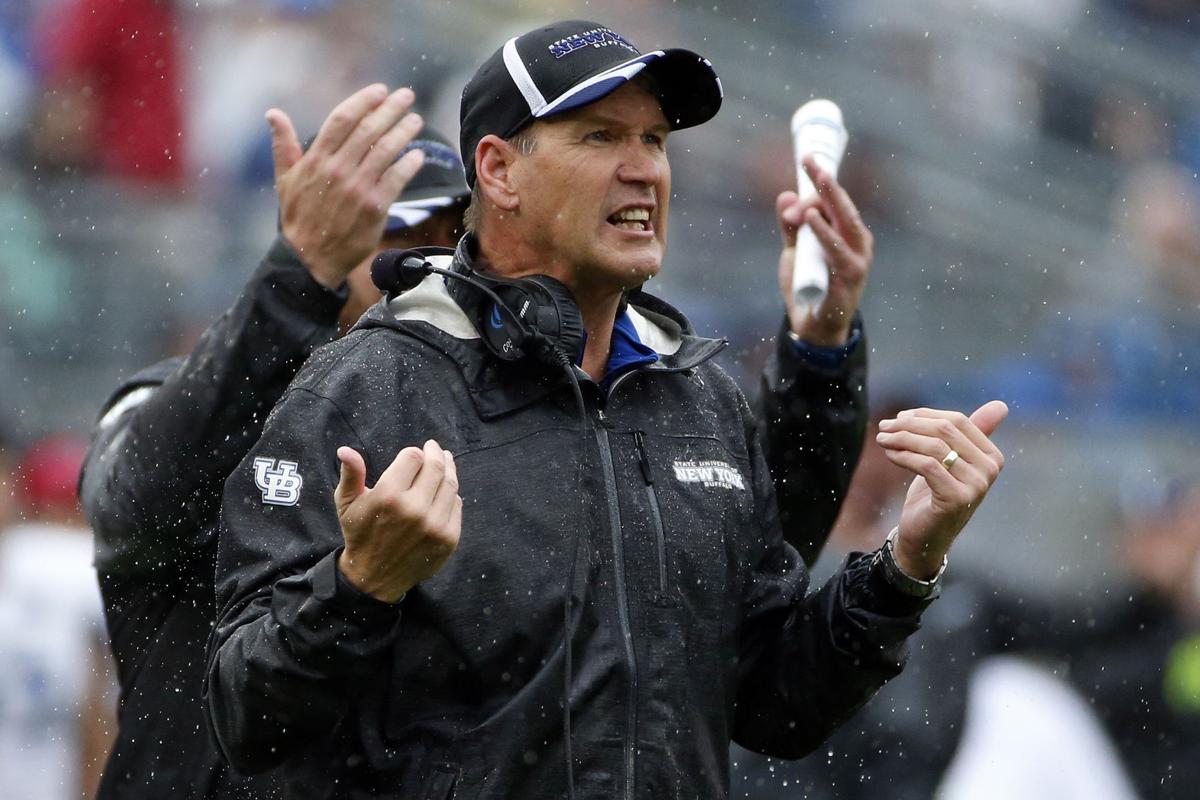 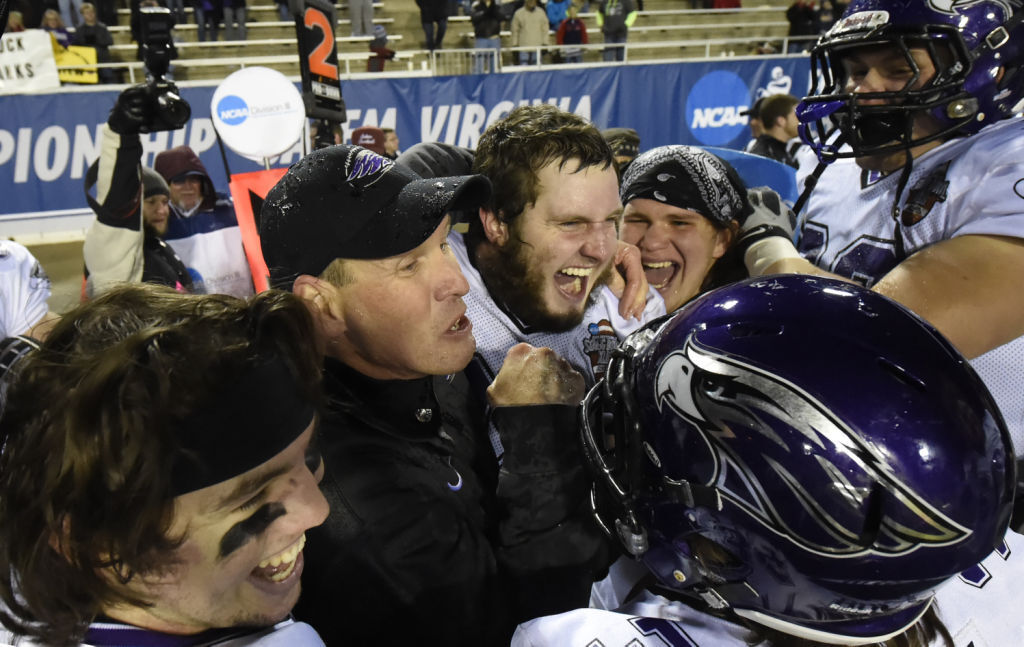 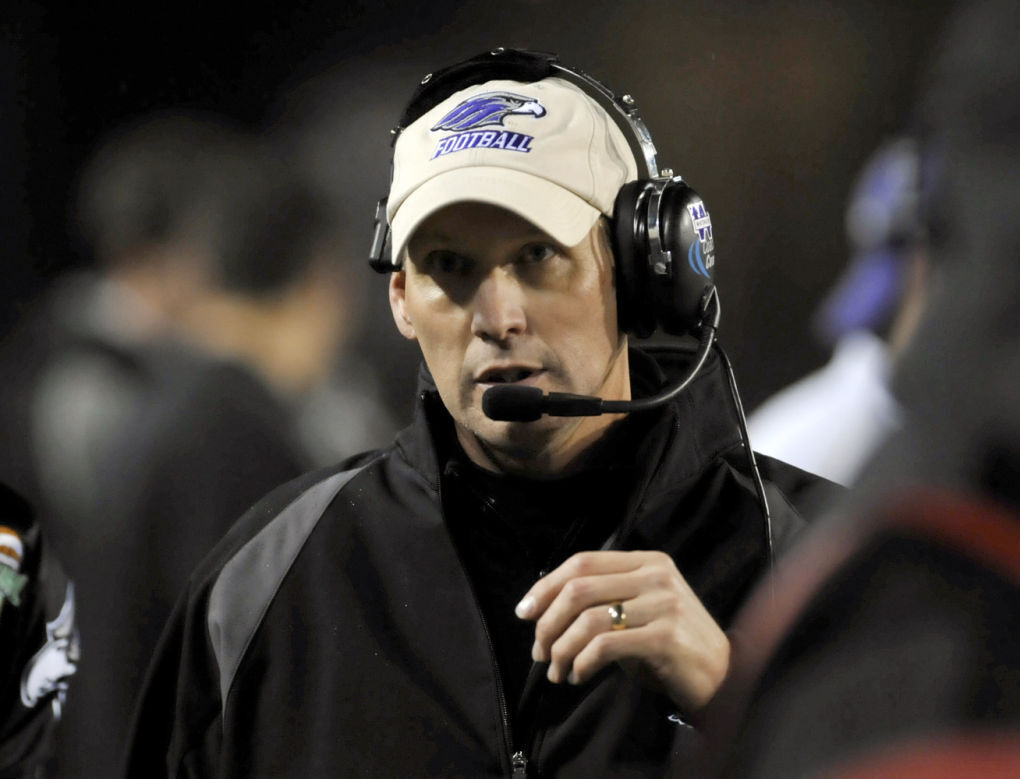 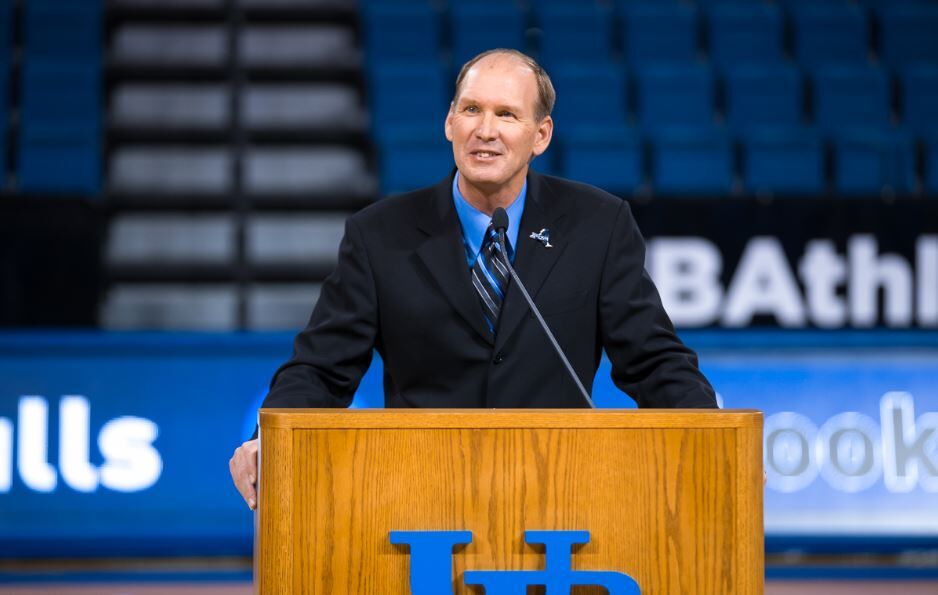 UW-Whitewater football coach Lance Leipold, who has led the Warhawks to five NCAA Division III titles, is introduced as the new coach at NCAA Division I Buffalo on Dec. 1, 2014. (University of Buffalo photo)

LAWRENCE, Kan. — Jefferson native and UW-Whitewater product Lance Leipold has climbed up another rung of the college football coaching ladder.

The 56-year-old was named the football coach at the University of Kansas on Friday, replacing the dismissed Les Miles.

With the move, the former University at Buffalo and UW-Whitewater coach now faces one of the most massive rebuilding challenges in all of college football.

Leipold, who signed a six-year contract with Kansas, takes over for Miles, the former national championship-winning coach at LSU. Miles parted with the school two months ago after two losing seasons amid sexual harassment allegations dating to his time with the Tigers.

The Jayhawks went 0-9 last season and haven't played in a bowl since 2008.

Leipold was also a finalist for the head-coaching opening at Illinois in December. Illinois hired Bret Bielema to replace Lovie Smith, who was fired after five seasons.

“It is an exciting and humbling opportunity and this is a day I will never forget,” Leipold said in a statement. “We are going to build this program through developing players, discipline and determination. The philosophies engrained in our programs along the way will be key as we turn this around.

"This is a program that has a lot of young talent on the roster and has the infrastructure in place to succeed. The best days for this program are ahead.”

Leipold has been with the Bulls the past six years, building a downtrodden program into a perennial bowl contender. He was 37-33 with Buffalo, leading the school to two Mid-American Conference championship games, three consecutive bowl games and its best seasons since joining the MAC in 1999.

The Bulls also earned the program’s first national ranking in school history, finishing at No. 25 in the final Associated Press Top 25 poll.

Before jumping to the Division I level, Leipold won six national championships in eight seasons while going 109-6 as the head coach at his alma mater, UW-Whitewater. At one point, the Warhawks won three consecutive NCAA III titles to cap perfect seasons, then after a seven-win “down year,” put together two more undefeated seasons.

Now, new Kansas athletic director Travis Goff — who was hired away from Northwestern in April — hopes a coach with all those DIII championships on his resume can do what a coach who won a DI title could not.

“His track record of sustained excellence is exactly what we were looking for in our next leader,” Goff said in a statement Friday, “and is what the University of Kansas and our fans deserve.”

Miles was hired nearly three years ago by then-AD Jeff Long to turn around one of the worst Power Five programs in college football history. Instead, the Jayhawks went winless in nine games during the COVID-19-shortened 2020 season, the 12th straight in which they failed to hit the .500 mark or win more than one Big 12 game.

Miles was then let go in March after sexual misconduct allegations surfaced. A law firm’s review of LSU’s handling of sexual misconduct complaints campuswide described how Miles “tried to sexualize the staff of student workers in the football program” before he was fired four games into the 2016 season.

Leipold played quarterback for UW-Whitewater in the 1980s before beginning a long grind through college football's lower ranks. He spent time at Doane, an NAIA school in Nebraska, and several seasons coaching at Nebraska-Omaha, which later disbanded its football program to save money.

His only Division I experience before Buffalo hired him in 2015 was a stint as a graduate assistant under Barry Alvarez at Wisconsin in the early 1990s and some time with Frank Solich at Nebraska in the early 2000s.

Leipold took over a Bulls program that had regressed under Jeff Quinn and had played in only two bowl games before his arrival. Leipold endured two losing seasons before winning at least six games each of the past four years, twice playing for a MAC title and going 6-1 during the pandemic-shortened 2020 season.

According to Leipold’s contract, obtained by The Buffalo News through a Freedom of Information Law request, Leipold earned a base annual salary of $474,300 and additional compensation of $150,000.

The buyout clause in Leipold’s contract states that if he terminates the contract between Jan. 1 and Dec. 30, 2021, the University at Buffalo would be owed $600,000.

The Jayhawks certainly have higher hopes for Leipold than the last coach they hired from Buffalo. Turner Gill was just 5-19 over two seasons in Lawrence before he was fired, beginning a whirlwind of hirings and firings. Charlie Weis lasted parts of three seasons, Beaty survived four and Miles was let go after two.

Along with the Jayhawks' history of losing, Leipold will have to overcome a substantial talent gap in the Big 12, fan apathy that has only grown over the past decade and facilities — despite a new indoor practice field — that are woefully outdated.

“I can’t thank Lance enough for everything he has done for our football program,” Buffalo athletic director Mark Alnutt said. “His vision and leadership helped elevate the UB football brand.

"We are grateful for what Lance has done here and we wish him and his family all the best as they embark on this new journey."

Look no further than UW basketball coach Bo Ryan for a prime example of how a jump from Division III to Division I can pay dividends for a program.

John Stellmacher and Kenneth Taylor also are among those scheduled to be inducted March 24.

College football: Before he says farewell to UW-Whitewater, Lance Leipold has one more game to coach

I’d been hanging on to this anecdote, a tad conflicted about revealing a high school story about a guy who is now a respected, 50-year-old pro…

Five coaches with Wisconsin ties are among the possible candidates as Illinois moves onto its fourth football coach since 2011 after firing Lovie Smith on Sunday.

AP Top 25 Takeaways: In abnormal season, business as usual for Alabama, even without coach Nick Saban

Amid all the uncertainty, disruptions, consternation and anxiety of the 2020 college football season amid the COVID-19 pandemic, No. 1 Alabama's excellence has been business as usual.

It is impossible to know exactly what restrictions or guidelines local health officials will have in place when student-athletes begin arriving on campus Aug. 10.

The two-time defending national champion Warhawks qualified for their ninth Stagg Bowl trip in the past 10 years, grinding out a 20-14 semifinal victory over Linfield College of McMinnville, Oregon.

UW-Whitewater football coach Lance Leipold, who has led the Warhawks to five NCAA Division III titles, is introduced as the new coach at NCAA Division I Buffalo on Dec. 1, 2014. (University of Buffalo photo)