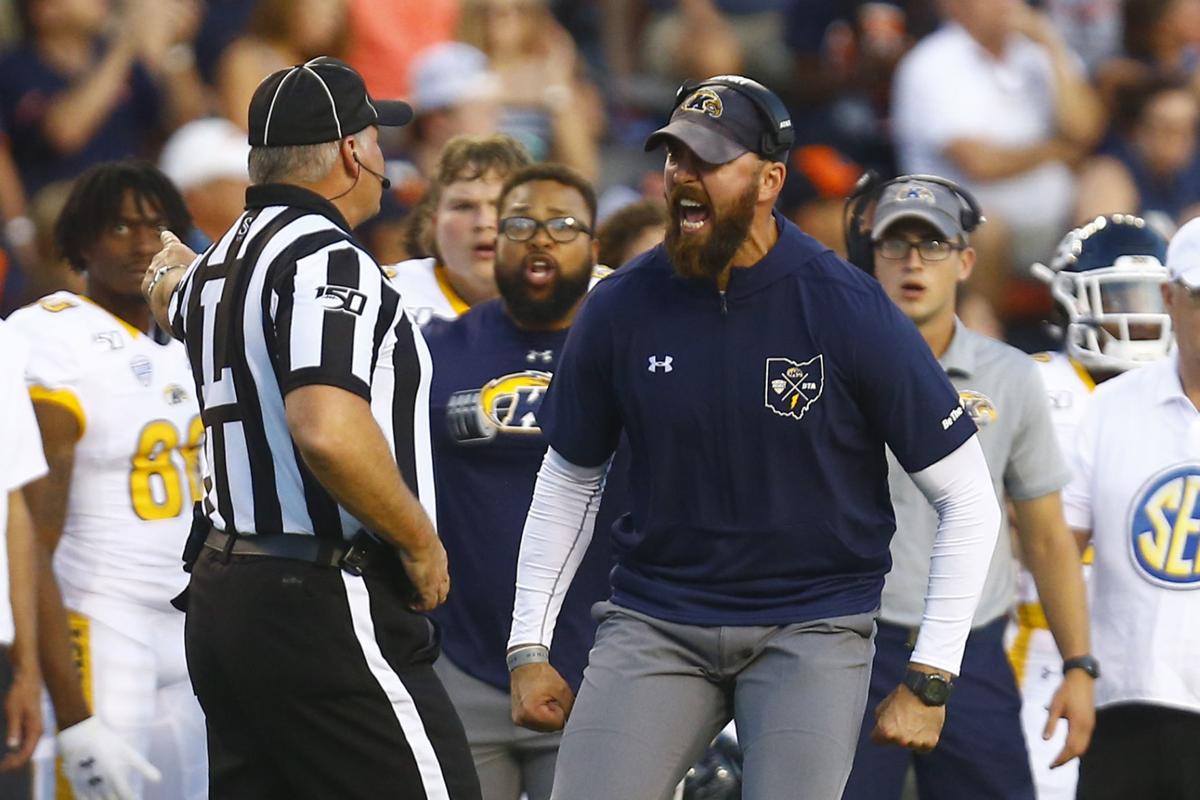 Sean Lewis is 4-12 in two seasons as coach at Kent State. The Golden Flashes are 2-2 this season with wins over Kennesaw State and Bowling Green and losses to Arizona State and Auburn. 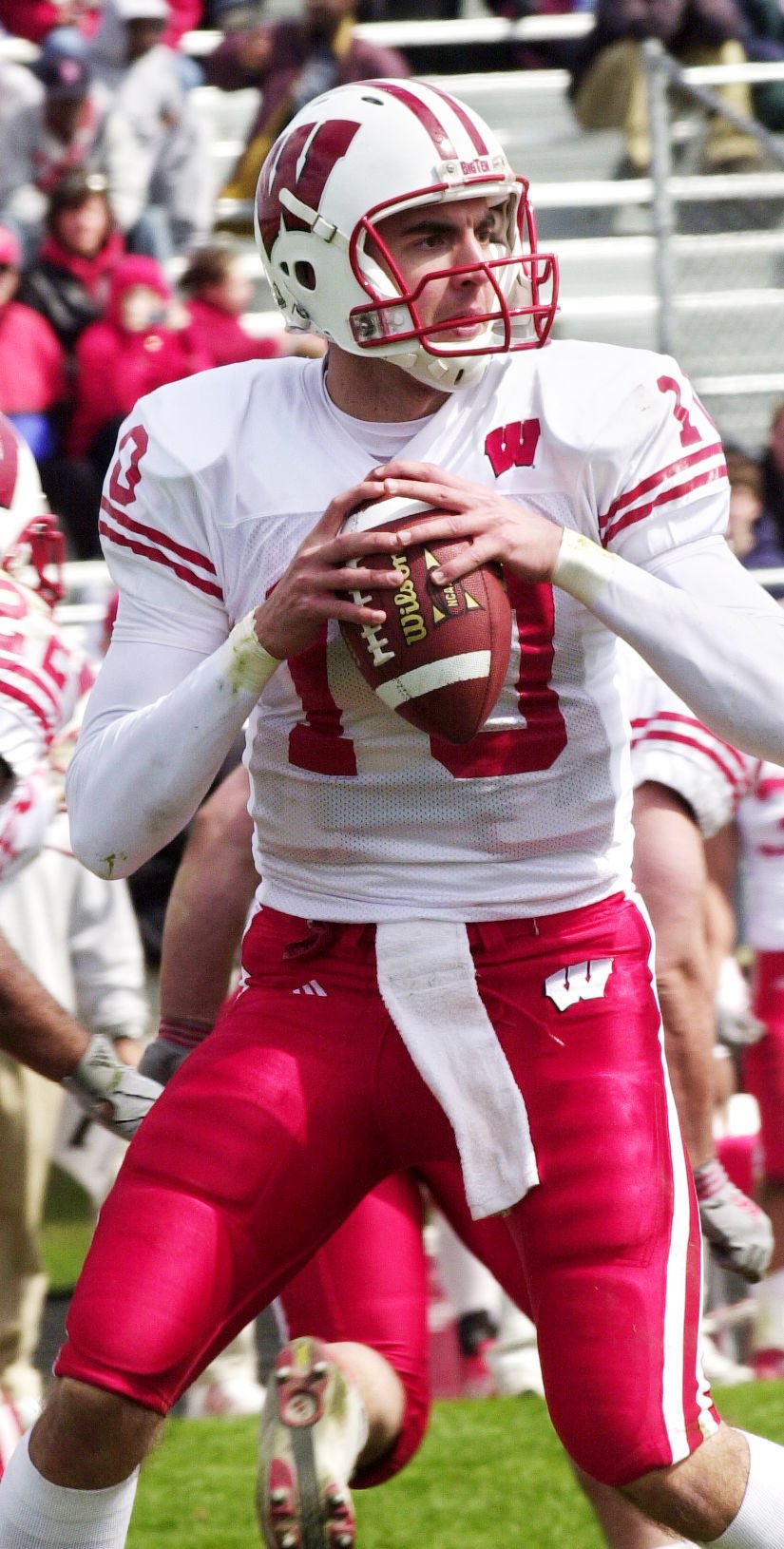 Sean Lewis looks to pass during UW's spring game in 2004.

Sean Lewis’s career with the University of Wisconsin football team was almost over and he was convinced he had caught the coaching bug. One of the first people he shared that news with was Paul Chryst, who was the program’s offensive coordinator at the time.

Twelve years later, they’ll go head-to-head as head coaches when Chryst and the No. 8 Badgers (4-0) host Lewis and Kent State (2-2) in a non-conference game Saturday at Camp Randall Stadium.

Lewis, who arrived at UW as a highly regarded quarterback prospect but earned his only two letters after being moved to tight end, reflected this week on that conversation with Chryst back in 2007.

“First off, he said, ‘I thought you were a lot smarter than that. There are a lot easier ways to make a (living) than coaching,’” Lewis said of Chryst’s reaction after he broke the news that he wanted to be a coach. “We kind of had a good laugh about that.”

But Chryst quickly turned serious and had some valuable words of wisdom ready for Lewis.

“The one piece of advice that he gave me that really stuck with me was pretty simple,” Lewis said. “Just make sure that your head, your heart and your butt are all in the same place. Do a good job, people will notice and the next job will come.”

A little over a decade later, Lewis is the youngest head coach in the Football Bowl Subdivision at 33.

Chryst said he’s been following Lewis’ career and was pumped when his former player landed the Kent State job.

“He’s was one of those guys you were glad he was in your room,” said Chryst, who coached the UW tight ends in 2005 when Lewis was a sophomore. “Whatever the team needed, he was going to jump in on. I enjoyed being around him.”

Lewis’ meteoric rise through the coaching ranks began with two seasons at his alma mater, Richards High School in suburban Chicago. He reached the college level at Nebraska-Omaha in 2010 and spent the next season as a graduate assistant at Akron, where one conversation changed the course of his career.

Lewis was helping colleague Kim McCloud clean out his office after the 2011 season ended when he asked McCloud, who was leaving to become the defensive coordinator at Eastern Illinois under Dino Babers, if he would put in a good word for him. Lewis’ pitch: He’d be a relentless recruiter and knew the Chicagoland area like the back of his hand.

McCloud vouched for Lewis to Babers, and so did former UW assistant Rob Ianello, who was fired at Akron after back-to-back 1-11 seasons. Lewis got his interview with Babers and was hired, the start of a six-year run in which Lewis was a sponge while following Babers from Eastern Illinois to Bowling Green to Syracuse.

When the Kent State job opened late in 2017, Lewis was intrigued. But he knew he probably couldn’t get the attention of Kent State athletic director Joel Nielsen without some help, so he reached out to someone he knew would have instant credibility: UW athletic director Barry Alvarez, who was still coaching when Lewis chose the Badgers over scholarship offers from Michigan, Iowa, Purdue, Northwestern and Tennessee.

“That’s one of the things about coach Alvarez is he’s respected,” Lewis said. “When he recruited me, it was one of those deals where if you’re a Badger, you’re a Badger for life. He picked up the phone and made a call on my behalf to (Nielsen). I’ve got to imagine that’s probably a big reason why I got the opportunity to get the interview. When coach Alvarez calls, people listen. I’m really grateful for that.”

Lewis’ spread offense that he learned under Babers doesn’t resemble the pro-style scheme he played in with the Badgers, but he said there are some core philosophical principles that he’s carried with him from UW.

“Hopefully when you watch us, you see a physical football team that’s disciplined, that looks to play the game violently, the right way, that’s tough-minded mentally and is tough physically,” Lewis said. “Those are a lot of the values that I learned when I was there under coach Alvarez and coach Chryst.”

Lewis took over a program that went 14-45 in five seasons under Paul Haynes and has had two winning seasons since 1987. The Golden Flashes already have matched their overall and Mid-American Conference win totals from Lewis’ first season, which he compared to a new business opening its doors and developing a brand.

“Now, Year 2, you’ve got to make enough sales, you’ve got to get enough wins to turn a profit,” said Lewis, whose team has recorded victories against Kennesaw State and Bowling Green to go along with lopsided defeats on the road to Arizona State and Auburn. “I feel that’s what we’re doing.

“We’re not even close to where we need to be, but we’re on the right path.”

Lewis was 31 when he was hired at Kent State and much has been made about his age ever since. That there’s been an uptick in the Golden Flashes’ recruiting since he arrived makes sense: Lewis can relate to 18-year-olds because he listens to the same music, speaks their language and can keep up with them on the technology and social media fronts. He used to be able to say he watched the same movies and television shows as the players he was recruiting but now, with a 3-year-old son who’s into “PJ Masks” and “Paw Patrol,” that’s not the case any longer.

Even if his age is an advantage in a lot of ways, being the youngest FBS coach in the nation isn’t something Lewis wears as a badge of honor.

“That’s one of those things that I get asked a ton about, but it’s something that I have no control over,” he said. “I happen to be the youngest guy. My parents happened to make love when they made love and I’m as old as I am.”

Still, Lewis doesn’t want his players to feel like a visit to his office is comparable to being summoned by the principal. That explains why it includes a PlayStation console for them to use.

“When ball’s going on, there’s nothing more important than ball,” Lewis said. “But coach Chryst always used to create these environments where we could talk about other things. You really wanted to play for a guy who did that. That’s something that I’ve tried to emulate.”

Jack Coan passed for just 113 yards and threw his first interception of the season in UW's 24-15 win over Northwestern on Saturday at Camp Randall Stadium.

Who has the edge when No. 8 Wisconsin hosts Kent State?

The Red Zone podcast: A look at the offense's struggles and the Badgers' matchup against Kent State

The trio has been effective for UW's retooled offensive line this season.

Issues on special teams could hurt the Badgers when Big Ten play resumes.

Get the latest analysis, injury reports and highlights as the No. 8 Wisconsin Badgers host the Kent State Golden Flashes on Saturday at Camp Randall.

Sean Lewis is 4-12 in two seasons as coach at Kent State. The Golden Flashes are 2-2 this season with wins over Kennesaw State and Bowling Green and losses to Arizona State and Auburn.

Sean Lewis looks to pass during UW's spring game in 2004.