Whether you are heading down to Camp Randall Stadium or watching from the comfort of your couch, the Wisconsin State Journal has Badgers fans covered with a complete breakdown of everything they need to know as the 18th-ranked University of Wisconsin football team takes on the Eastern Michigan Eagles on Saturday night in Madison.

Saturday's game is being broadcast on Fox Sports 1, with kickoff schedule for 6 p.m. Fans in the Madison area can also listen along on 101.5 FM or 1310 AM with Matt Lepay and Mike Lucas on the call.

With Saturday night marking the second game the Badgers have welcomed fans back to Camp Randall after the pandemic kept them away in 2020, university officials are hoping for a smoother experience after last weekend's opener saw long concessions lines and a lack of mask wearing on concourses.

For fans who are attending their first game of the season, there are a few changes to be prepared for:

The Badgers shared a short video on social media this week with a few tips for using the digital tickets when entering the stadium. Fans are instructed to place their phones under the scanner, with the screen side facing up, and wait for the green light to illuminate. The video also suggests turning your phone's brightness to its maximum setting before placing it under the scanner.

🎟 Reminder on some gameday tips!

See you all TOMORROW! 👏 pic.twitter.com/xm9LsRGpfd

For fans still looking for a ticket to get into Saturday night's game, as of Friday at 5 p.m., UW still had seats available for $30-$40 before fees and the ticket brokering website StubHub was offering seats from $10-$66 plus fees.

Weather: The pleasant weather in Madison is expected to last through the first half, with the National Weather Service predicting clear skies and an afternoon high of 88 degrees before calling for a 20 percent chance of showers and thunderstorms after 8 p.m. as the temperature cools to an overnight low of 65 degrees.

Parking: The university operates a number of parking lots on a first-come, first-served basis on football gamedays, with costs ranging from $5-$15 for passenger vehicles. For those heading to the game by bicycle, there is free bike parking available from 4 p.m. to 10:15 p.m. behind the Monroe Street Fire Station along the southwest commuter path. Check out the map below for all parking lot locations and availability: 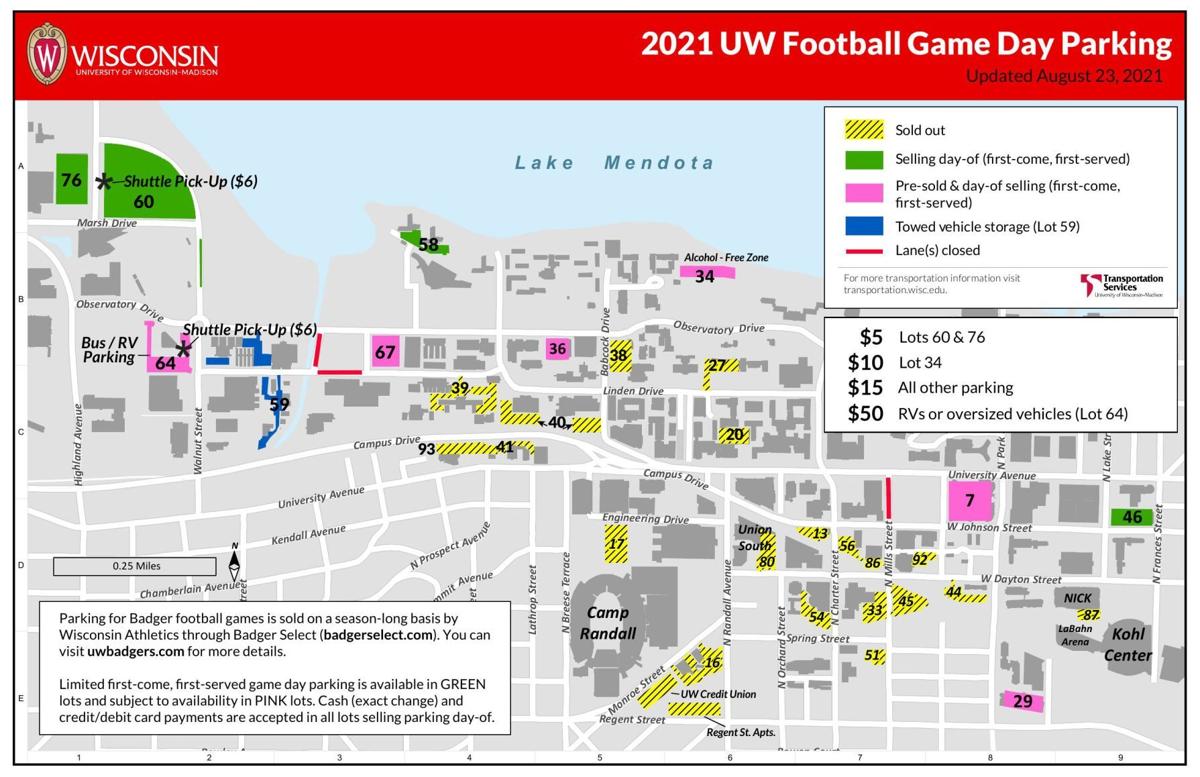 Cashless concessions: Concession stands at Camp Randall will accept only credit and debit cards, Google Pay and Apple Pay. The change, which made a rocky debut at last Saturday's opener against Penn State, has been implemented by other arenas and stadiums in the state. Unlike at some other venues, there will be no reverse ATM kiosks allowing fans to exchange cash for a prepaid card, so plan accordingly. UW is allowing fans to bring a sealed 20-ounce bottle of water into the stadium.

Remembrance: The Badgers will recognize the 20th anniversary of the terrorist attacks of Sept. 11, 2001, with a moment of silence before the national anthem, which is scheduled for 5:45 p.m. Following the anthem, there will be a flyover by F-16 pilots from the 115th Fighter Wing of the Wisconsin Air National Guard based out of Truax Field in Madison.

Gameday entertainment: The UW Marching Band will stop by Badgerville for a performance at 4:25 p.m. before swinging by Union South for a Badger Bash performance at 5:05 p.m. For halftime, the band is planning a special performance titled "Freedom: The UW Band Commemorates the 20th Anniversary of 9/11." And no day at Camp Randall would be complete without the band's signature "Fifth Quarter" performance, which follows the end of the game.

Wisconsin vs. Eastern Michigan football: 3 keys to victory, analysis of the Badgers running game and a prediction

From in-depth analysis of what went wrong in the Badgers' underwhelming opener to a look at what challenges await when Eastern Michigan comes to town to how Eagles quarterback Ben Bryant went from Badgers commit to determined foe — and everything in between — we have something for every Badgers fan:

Jim Polzin: The Badgers offense lacks imagination and execution. That needs to change, starting this week

Around 90% of Badgers athletes are vaccinated against COVID-19, official says

Grading the Badgers: Offense, coaching get failing grades in loss to Penn State

The Wisconsin Badgers take on Penn State Nittany Lions in their home opener at Camp Randall Stadium in Madison on Saturday, Sept. 4, 2021.

No. 16 UCLA, No. 19 Virginia Tech, No. 20 Mississippi and No. 25 Auburn moved into the AP Top 25, but history is littered with teams that made brief, early season appearances in the poll only to fade away.

In the centerpiece game of the opening weekend, No. 5 Georgia put on a relentless, ferocious, smothering display of defense against No 3 Clemson.

Columnist Jim Polzin offers his initial thoughts on the Wisconsin Badgers' loss to Penn State in their Big Ten opener.

A recap of the top plays, top performers and key takeaways from Wisconsin's 16-10 loss to Penn State.

Riley Moss returned two first-half interceptions for touchdowns and No. 18 Iowa defeated No. 17 Indiana 34-6 on Saturday.

While many of the changes Badgers fans will see were inevitable as new technologies move into the in-stadium experience, the pandemic advanced the timeline for UW.

At UW-Madison, the focus was on public service.