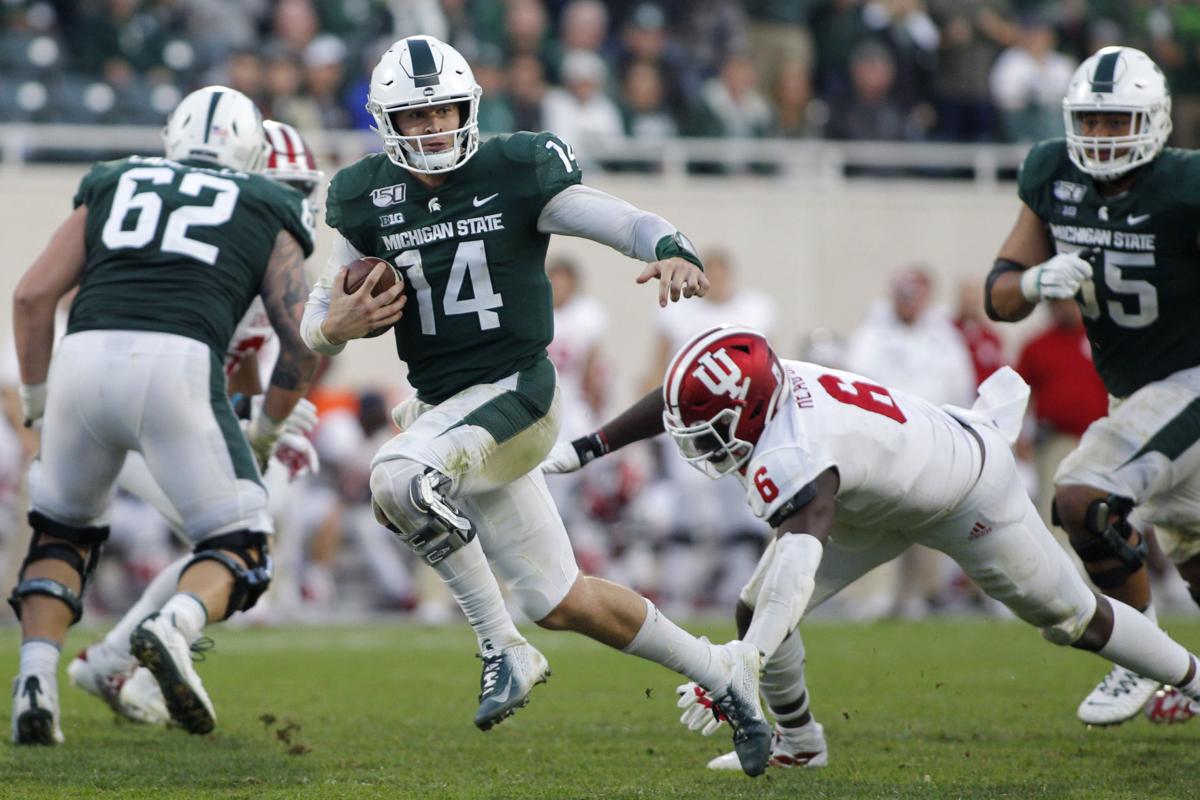 Michigan State quarterback Brian Lewerke has accounted for an average of 281 yards of offense per game (257 passing, 24 rushing) for the Spartans (4-2) this season. 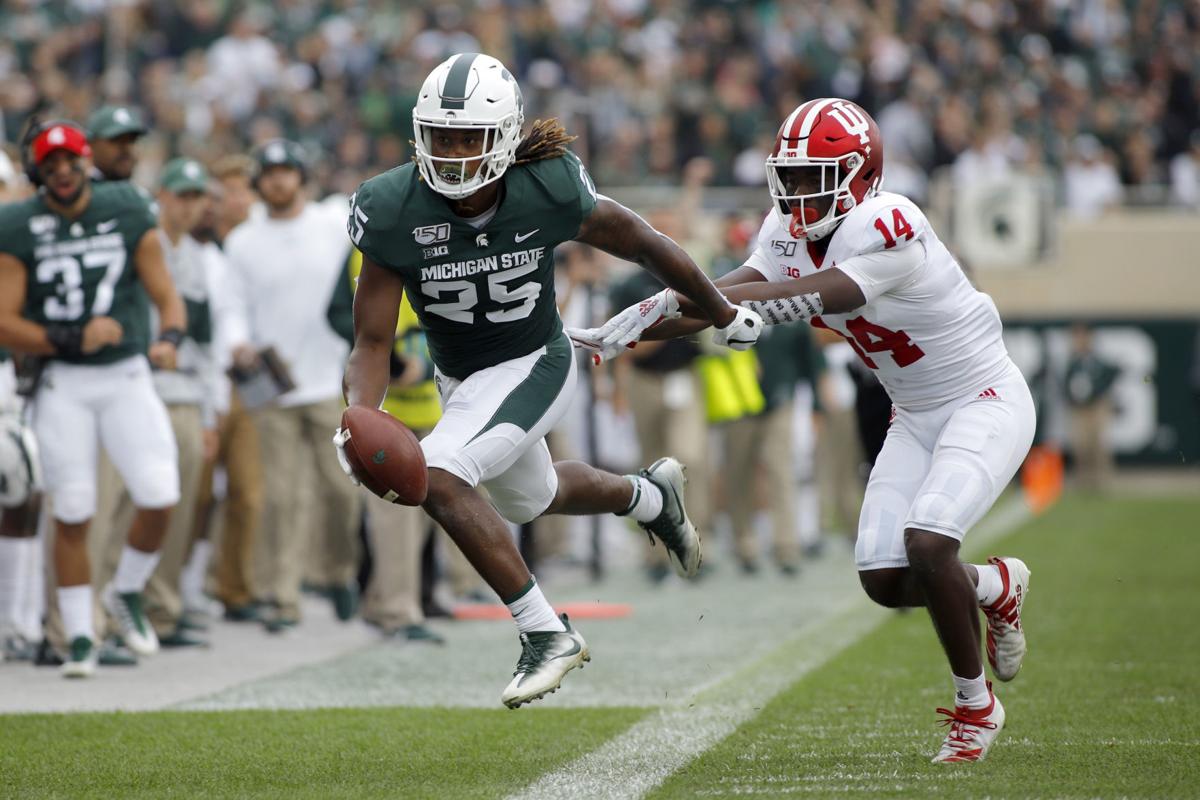 After his team struggled offensively in 2018, Michigan State coach Mark Dantonio decided it was time for some changes on that side of the ball.

No surprise there. What made Dantonio’s approach unconventional was that he essentially moved around the furniture in the living room rather than tossing it out on the curb in favor of shiny, new items.

All five offensive assistants from 2018 still had jobs with the Spartans when the dust settled, but each of them was coaching a different position than the previous season. Meanwhile, Brad Salem was promoted from quarterbacks coach to offensive coordinator and Dave Warner and Jim Bollman were stripped of their co-offensive coordinator titles.

It’s a little early to tell if Dantonio’s unique remodel is a success, failure or something in between. The Spartans (4-2, 2-1 Big Ten) are No. 10 in the conference in scoring and No. 9 in total offense heading into their game against the eighth-ranked University of Wisconsin football team on Saturday at Camp Randall Stadium.

One stat that stuck out from Michigan State’s 7-6 season a year ago was that it averaged 9.5 points in its six defeats.

It’s averaging 8.5 points in its two defeats this season, a 10-7 setback at home against Arizona State and a 34-10 loss at Ohio State last week.

“They have a very talented offense,” UW defensive coordinator Jim Leonhard said. “I think it’s been a little inconsistent at times, but the talent is high.”

The Badgers (5-0, 2-0) and Spartans haven’t played since 2016, so it was interesting for veteran UW defensive players to watch video of this Michigan State outfit and see an offense that was only using one back and playing at a quicker tempo.

The Spartans have been relying heavily on senior quarterback Brian Lewerke, who is averaging more than 35 passing attempts per game. Lewerke already has thrown for 1,543 yards with 11 touchdowns and two interceptions, a far cry from 2018 when he finished with more picks than scores while dealing with a shoulder injury.

Lewerke’s favorite target is senior wide receiver Darrell Stewart Jr., who has 41 catches for 624 yards and four touchdowns. Stewart is second in the Big Ten with 104 receiving yards per game.

Stewart didn’t have any 100-yard games prior to this season. He already has three in 2019, including a 10-catch, 185-yard effort against Western Michigan.

“Big guy,” UW sophomore cornerback Faion Hicks said of the 6-foot-2, 216-pound Stewart. “He attacks the ball, strong. He’s not really a blazer, but he uses his routes — good route-runner — to get open. Strong hands. But other than that, though, I don’t think it’s too much of a worry.”

UW’s pass defense, which ranks No. 8 in the nation, has yet to be tested by a great air attack. Michigan’s receivers had great credentials but weren’t much of a threat until the game was out of reach.

Hicks was asked if Stewart is the best receiver UW has seen this season.

That pretty much sums up where Michigan State stands these days.

When UW arrived in East Lansing on Sept. 24, 2016, the Spartans were flying high. They were coming off a three-year stretch in which they went 36-5 overall, won 24 of 26 games against Big Ten opponents and played in a College Football Playoff. They’d opened the 2016 season by winning their first two games, including a victory at Notre Dame.

Dantonio was asked Tuesday if Michigan State’s three-year run from 2013-15 created outsized expectations for the program?

“Well, I think that we have high expectations within our program,” he said. “I think every year we line up and say: ‘OK, we can win every football game.’ I think that’s what you have to be able to do.

“To say I’m a victim (of the program’s success), that might be accurate, but I just believe in trying to win and continuing to preach confidence and part of that (is) to go in expecting to win and expecting good things to happen.”

The Badgers get 5 touchdowns from Jonathan Taylor to blow out Kent State. Matt Lepay and Head Coach Paul Chryst discuss the effort of JT and a…

UW’s top quartet of receivers — Quintez Cephus, Danny Davis, Kendric Pryor and A.J. Taylor — have accounted for just 13 catches and 153 yards over the past two weeks.

"In the past, we’ve been more traditionally run (on first down). So it’s going to make defenses play honest,” UW running back Jonathan Taylor said.

Jonathan Taylor had a career-high five touchdowns, with four of them coming before halftime, as the 8th-ranked University of Wisconsin football team shut out the Kent State Golden Flashes, 48-0, on Saturday at Camp Randall Stadium.

When Badgers coach Paul Chryst put freshman quarterback Graham Mertz in with six minutes remaining in the third quarter of UW's blowout of Kent State, the heralded recruit proved to be ready for the chance.

“It’s just unbelievable. I think it’s just pretty cool how I get to play with him,” junior quarterback Jack Coan said after UW's 48-0 win over Kent State. “I’m probably going to tell my kids one day how I got to play with ‘J.T.’ It’s pretty special.”

After getting routed by Ohio State, Michigan State faces another huge test in Jonathan Taylor, Wisconsin

The Spartans lost 34-10 to No. 3 Ohio State on Saturday as big plays blew open the game in the second quarter.

Who has the edge when the No. 8 Badgers host Michigan State to resume Big Ten play?

Get the latest analysis, injury reports and highlights as the No. 8 Wisconsin Badgers host the Michigan State Spartans on Saturday at Camp Randall.

Wisconsin State Journal reporter Jim Polzin asked Badgers fans on Twitter what they thought of No. 8 Wisconsin's 38-0 win over the Michigan St…

Michigan State quarterback Brian Lewerke has accounted for an average of 281 yards of offense per game (257 passing, 24 rushing) for the Spartans (4-2) this season.