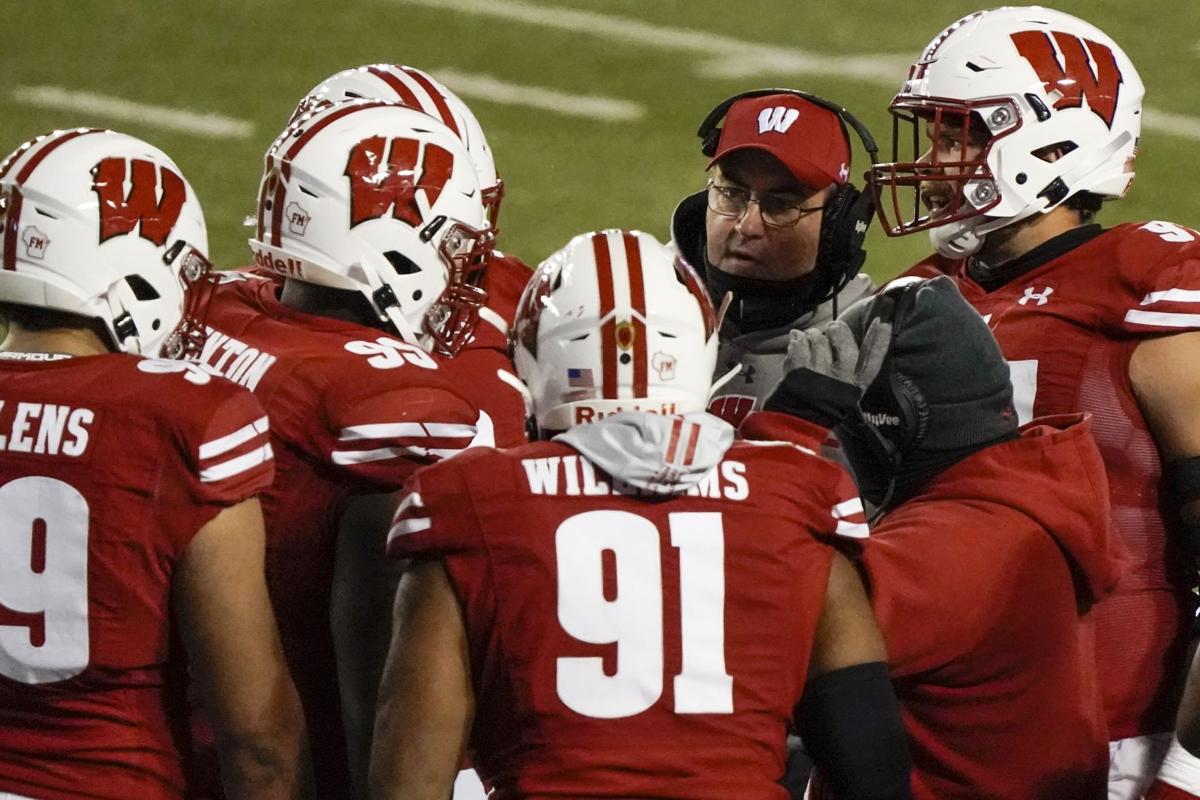 Badgers coach Paul Chryst wears his mask on his chin while addressing defensive players during the first half of Friday's game against Illinois at Camp Randall Stadium. 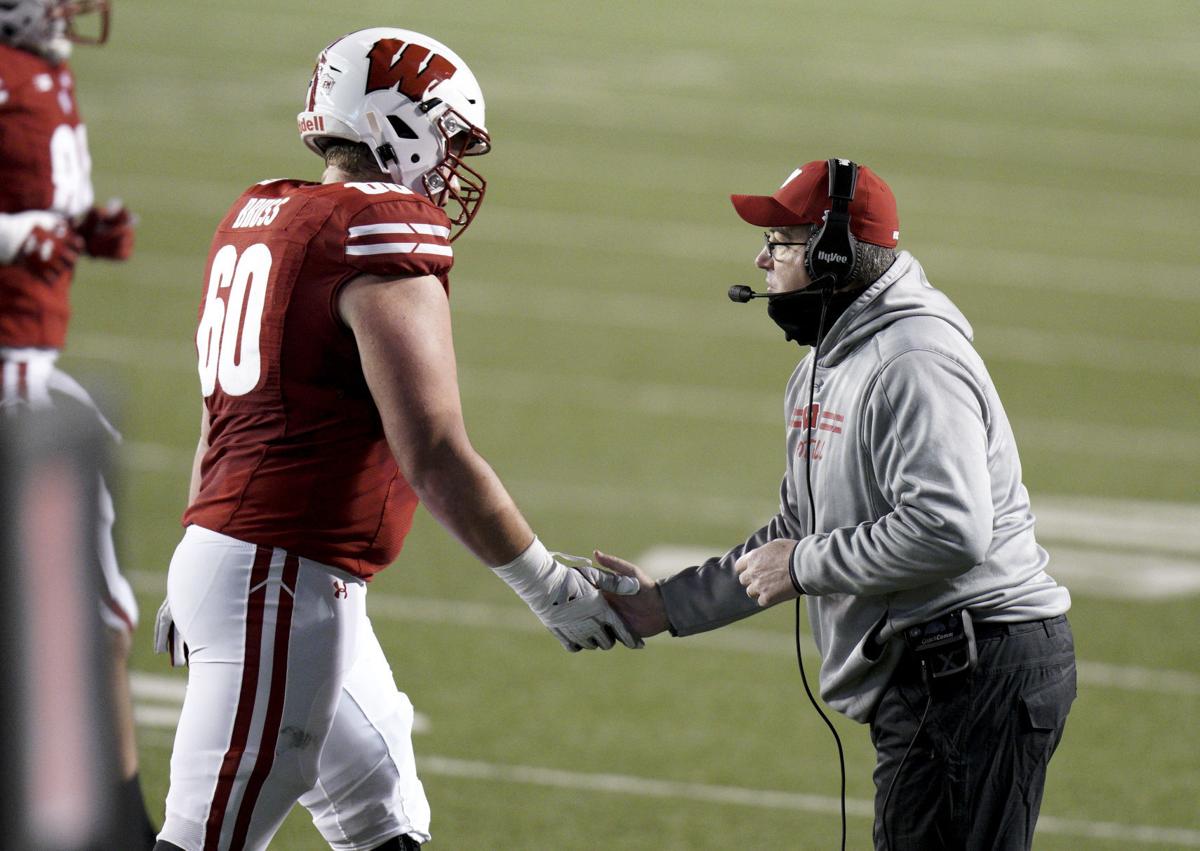 Sitting in his home speaking to reporters via a Zoom call, University of Wisconsin football coach Paul Chryst said he didn’t have any symptoms following his COVID-19 diagnosis.

Physically, he felt fine, he said. But his emotions were high after his program’s in-person activities were shut down and his No. 9 Badgers’ game at Nebraska this Saturday was canceled due to an elevated number of COVID-19 cases within the program.

Chryst, who has spoken often since the return of Big Ten Conference football about the challenge in front of his team, said he felt disappointed in the Badgers’ outbreak. Six players and six staff members have become infected with the coronavirus in the past five days and more tests are pending.

Chryst said he took an antigen test Tuesday morning and tested negative, but tested positive on the PCR test the entire team took Tuesday afternoon. Sources told the State Journal quarterbacks Graham Mertz and Chase Wolf, and offensive coordinator Joe Rudolph are among the 12 individuals who have been infected.

Chryst has been criticized for wearing his face covering improperly during the Badgers’ 45-7 win over Illinois last week to start the Big Ten’s truncated season. Chryst was seen multiple times on the television broadcast with his mask not covering his nose, and at other times with his mask underneath his chin. Chryst spoke with players, coaches and officials with his mask down.

CDC guidelines regarding facial covering state that it should cover the wearer’s nose and mouth to help stop the spread of COVID-19.

Chryst told reporters Wednesday that his glasses were fogging up with his mask on, something that wasn’t happening during the Badgers’ daytime practices at Camp Randall Stadium. Players and coaches have been wearing masks and distancing as much as possible in meeting rooms, so one can assume Chryst has dealt with his glasses fogging before Friday’s game.

“That was something I needed to get better at and was working on that (Tuesday) on the field. I had the shield and the mask,” Chryst said.

What caused the Badgers’ outbreak is not known, and given the virus’ mutation rate and contagiousness, it’ll be difficult to trace to one source. Chryst said the Badgers’ made changes to their typical routine when they stayed in a local hotel last Thursday night.

“At the hotel we didn’t have any team meals. We had it available and there was to-gos and you kind of had some spaced-out seating for some, 10 in a room and big rooms. So you try to do all you can,” Chryst said. “Do I know that something there caused it? I don’t know ground zero or where it really started.”

The Badgers are now on a seven-day pause from in-person team activities as they try to curb the spread of the virus. The program is in the process of securing hotel rooms in order to separate players who live together.

Getting case numbers back under control is crucial for the Badgers to be able to return to the field. Chryst and other infected coaches must isolate 10 days before returning to in-person work with the team. Infected players are out of game action for 21 days from the time of their first positive test.

Chryst indicated that other staff members were asymptotic as well, and suggested players were doing OK as well.

“I can talk about myself. You’re always certainly concerned about your guys, but … you know right now I will say that … we’ve been fortunate in a lot of ways. … But I’m not supposed to be talking about players,” he said.

Chryst said each day the program tries to mitigate COVID-19 risks better. The missteps — both potential and realized — that led to the Badgers’ current situation must be addressed.

“From the moment we got back together, (we’re) talking to our players all the time about what’s happening. You can have the best of intentions and you can do all that you can and it can still happen,” Chryst said.

“It feels different when you’re one of the, I don’t want to say contributors, but I’ve got to listen to the words that I was talking to them.”

“The seven-day pause is important for us,” coach Paul Chryst said Wednesday. “We’ve got to do that well. That’s got to go kind of serve its proper purpose and then we can kind of address the other parts of it."

The six Badgers football players who tested positive in a five-day period ending Wednesday all face the same three-week layoff from playing regardless of whether they're exhibiting symptoms.

If both Chase Wolf and Graham Mertz are unavailable, the Badgers are slim on options at quarterback heading into their game at Nebraska.

After Friday night’s dominant win over Illinois, one of the few concerns about the University of Wisconsin football team was the state of its …

Nebraska is 9-16 overall and 6-13 in the Big Ten under Scott Frost, who is in his third season with the Cornhuskers. They've lost seven consecutive games in the series with UW, which is scheduled to travel to Lincoln in Week 2.

Graham Mertz has tested positive for COVID-19, sources told the State Journal on Sunday. As with all positive tests that occur using the daily rapid antigen tests, Mertz will be taking a PCR nasal swab test in order to confirm his diagnosis.

The Big Ten on Thursday denied Nebraska’s request to play a non-conference opponent Saturday to replace its originally scheduled game with the University of Wisconsin that was canceled because the Badgers had a spike in COVID-19 cases.

From possible false negatives to the search for the source, examining the complications of containing the Badgers’ COVID-19 coronavirus outbreak.

The gap between the truly elite and the rest of college football was never more apparent Saturday as No. 1 Clemson gave a glimpse of life after Trevor Lawrence and No. 3 Ohio State toyed with what was supposed to be its toughest opponent.

Badgers coach Paul Chryst wears his mask on his chin while addressing defensive players during the first half of Friday's game against Illinois at Camp Randall Stadium.