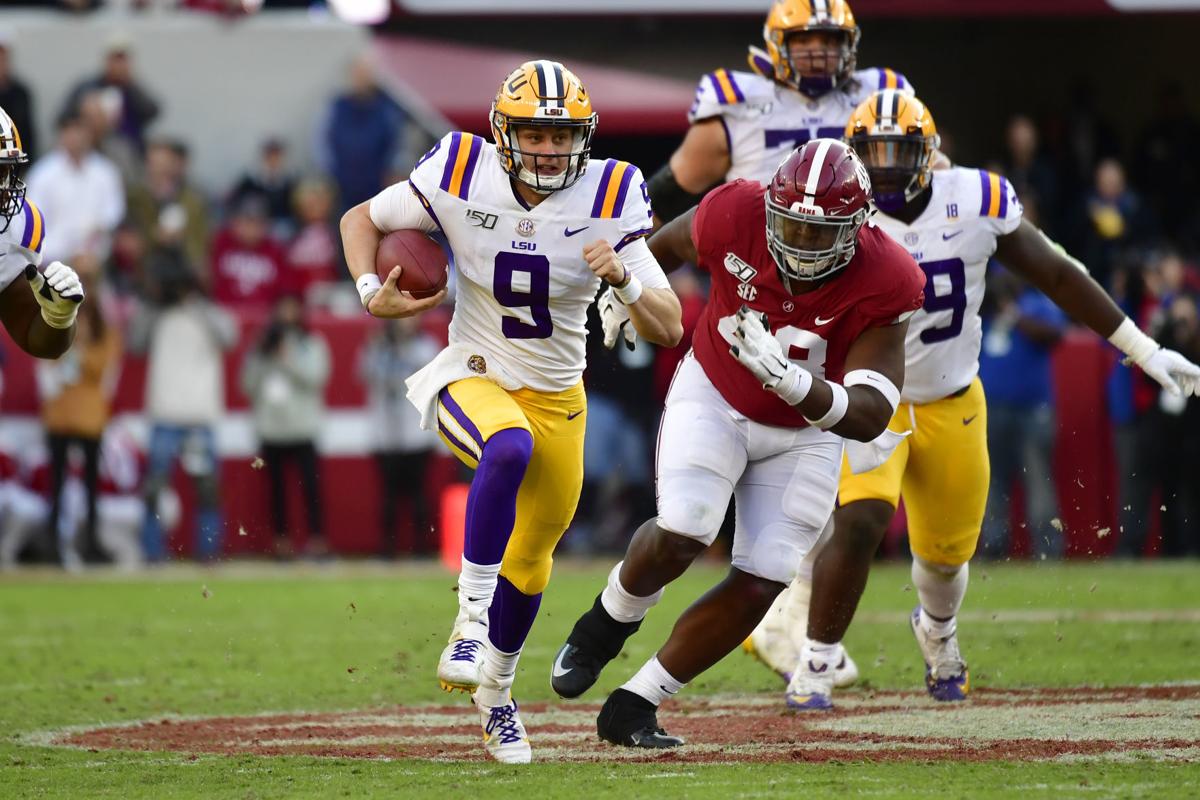 LSU quarterback Joe Burrow (9) runs as Alabama defensive lineman Phidarian Mathis (48) chases him in the first half of LSU's 46-41 win on Saturday, Nov. 9, 2019, in Tuscaloosa, Ala. 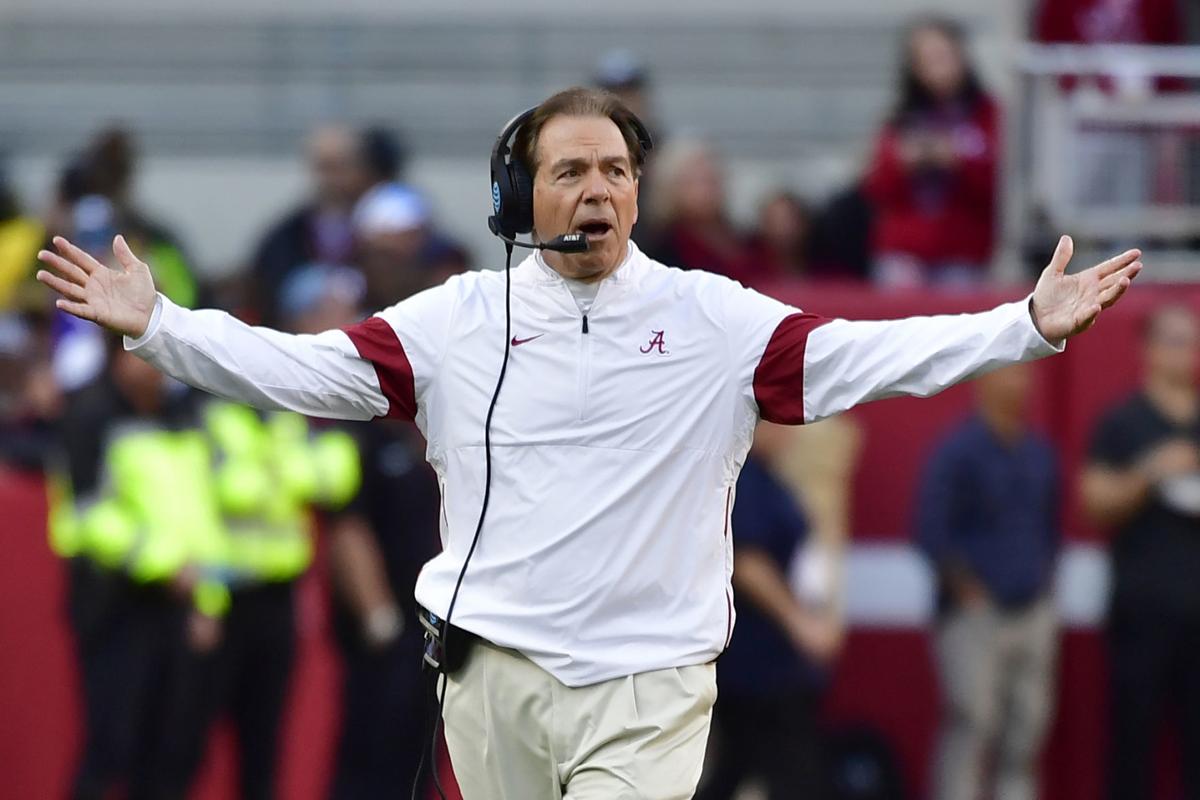 Alabama head coach Nick Saban reacts on the sidelines in the first half of an NCAA college football game against LSU, Saturday, Nov. 9, 2019, in Tuscaloosa , Ala. (AP Photo/Vasha Hunt)

Over the next four weeks there will be much debate about whether Alabama is one of the four best teams in college football.

AP Top 25 voters weighed Sunday, a day after the Crimson Tide lost a 46-41 thriller to LSU, and the consensus was yes. Alabama was No. 4 in The Associated Press college football poll presented by Regions Banks.

LSU remained No. 1, but for the first time since taking the top spot three weeks ago, the vote was a landslide. The Tigers received 54 first-place votes. No. 2 Ohio State received five first-place votes and No. 3 Clemson got three.

Alabama was a distant fourth behind the top three with 1,312 points, but also comfortably ahead of No. 5 Georgia (1,267 points).

The College Football Playoff committee has its say Tuesday and it wouldn't be surprising if the Tide lands in the top four of those rankings, too.

Ostensibly the committee and the voters have the same job: Rank teams in order of which are best. In reality, though, there is a big difference. The selection committee is eventually seeding a tournament. They are rewarding four teams with a chance to play for a national championship. There is no difference between No. 1 and No. 4, but the team that's fifth might as well be last.

The AP voters face no such consequences. All you get for being No. 4 is bragging rights on No. 5.

Voters, like the committee, blend a combination of performance and accomplishment, but there is no protocol instructing them to emphasize conference championships in cases where two teams are close.

Reality Check is curious to see if voters start weighing their choices as if they have the same consequences as the committee — even though they do not.

Reality check: All the intrigue for the Buckeyes over the next week is off the field and as the status of DE Chase Young gets sorted out.

Next: vs. Wake Forest.

Reality check: The Tigers are now in full buzz-saw mode, having outscored their last four ACC opponents by 163 points.

Next: at Mississippi State.

Reality check: Alabama can beat any team in the country. But the Crimson Tide lost one of only two games on their schedule against a team with a realistic chance of beating them.

Reality check: In a world where LSU and Alabama combined to score 87 points in a game, the Bulldogs are trying to win a national championship with defense. Good luck with that.

Reality check: The Ducks are probably going to need to not only to win out, but do so impressively.

Reality check: The Nittany Lions had not allowed more than 5.21 yards per play in any game before Minnesota hit them for 7.67.

Reality check: That new and improved Oklahoma defense has had a same old, same old look the last two games.

Ranked: About right. Could flip-flop with Penn State.

Reality check: As the Gators roll toward a 10-2 season, feel free to ding them just a bit for playing two FCS teams.

Next: vs. Michigan State.

Reality check: The Wolverines have run for three touchdowns in each of their last four games.

Reality check: The Badgers lead the nation in time of possession at nearly 37 minutes per game. Very on brand.

Reality check: Irish lost DE Julian Okwara, their best edge rusher, for the season after he broke his left leg against Duke.

Next: at South Florida.

Reality check: Bearcats could use to clean up the penalties; they are last in the ACC at 9.3 per game for almost 80 yards.

Reality check: Brady White has at times frustrated Tigers fans during his two years as starter, but he leads the American in passer rating (182.23) and would have a good case to be the all-conference quarterback.

Next: vs. New Mexico.

Reality check: LB Curtis Weaver leads the Mountain West in sacks with 12 and seems like the front-runner for conference defensive player of the year,

Reality check: The Mustangs play all-or-nothing defense, leading the American in sacks (42) while allowing 301 yards passing per game (last in the conference).

Next: at Iowa State.

Reality check: The Longhorns have shown some toughness when facing adversity.

Reality check: How to sum up the Hawkeyes' offense? K Keith Duncan has more made field goals (22) than attempted PATs (19).

Reality check: The Hoosiers are ranked for the first time in 25 years, breaking the longest drought among Power Five schools. They also have not beaten an FBS team with a winning record.

Reality check: The churn of Big 12 teams at the bottom of the Top 25 continues.

Instead of Oklahoma State how about Appalachian State?

The secondary did just enough to help UW hold on for a 24-22 victory over Iowa on Saturday at Camp Randall Stadium.

Badgers move up in AP Top 25 after beating Iowa

UW is one of seven Big Ten teams ranked in the poll.

UW has won the past six games against the Cornhuskers.

AP Top 25 Takeaways: Just being 'Bama might not be enough

There has never been a playoff without Alabama, but to keep that streak going, the Tide is going to need some help — from other teams and the selection committee.

Tom Oates: Badgers get back on track in Big Ten West race with hard-fought win over Hawkeyes

It wasn't pretty and it wasn't easy — games between UW and Iowa never are — but the hard-fought victory over its arch rival was exactly what UW needed after dropping back-to-back road games against on-the-rise Illinois and third-ranked Ohio State.

No. 16 UW needed to stop a two-point conversion late in the fourth quarter to do it, but the Badgers held off the No. 18 Iowa Hawkeyes 24-22 in front of a loud crowd to stay alive in the Big Ten West Division race.

UW linebacker Chris Orr delivered the first hit on Iowa quarterback Nate Stanley as he tried to score on a two-point conversion attempt in the fourth quarter Saturday. Safety Eric Burrell followed up with another wallop almost immediately, and the two kept Stanley from crossing the plane, and kept UW ahead in what became a 24-22 win.

Davis scored his first two touchdowns of the season — including the first rushing score of his career — and Cephus added 94 receiving yards and a touchdown to help UW (7-2, 4-2 Big Ten) end a two-game losing streak.

A quick look at the 16th-ranked Wisconsin Badgers' 24-22 win over the 18th-ranked Iowa Hawkeyes on Saturday at Camp Randall.

LSU quarterback Joe Burrow (9) runs as Alabama defensive lineman Phidarian Mathis (48) chases him in the first half of LSU's 46-41 win on Saturday, Nov. 9, 2019, in Tuscaloosa, Ala.

Alabama head coach Nick Saban reacts on the sidelines in the first half of an NCAA college football game against LSU, Saturday, Nov. 9, 2019, in Tuscaloosa , Ala. (AP Photo/Vasha Hunt)