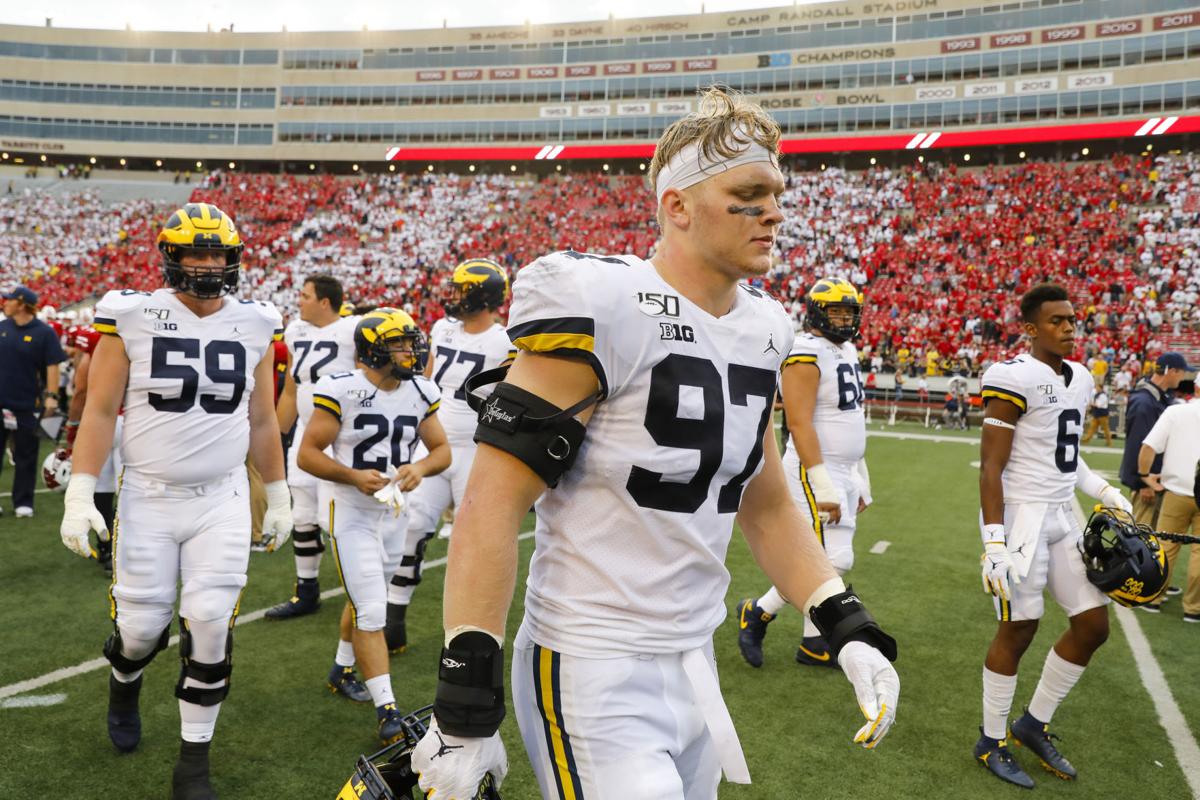 Michigan defensive lineman Aidan Hutchinson walks off the field with his teammates after losing 35-14 to Wisconsin in an NCAA college football game Saturday, Sept. 21, 2019, in Madison, Wis. (AP Photo/Andy Manis) 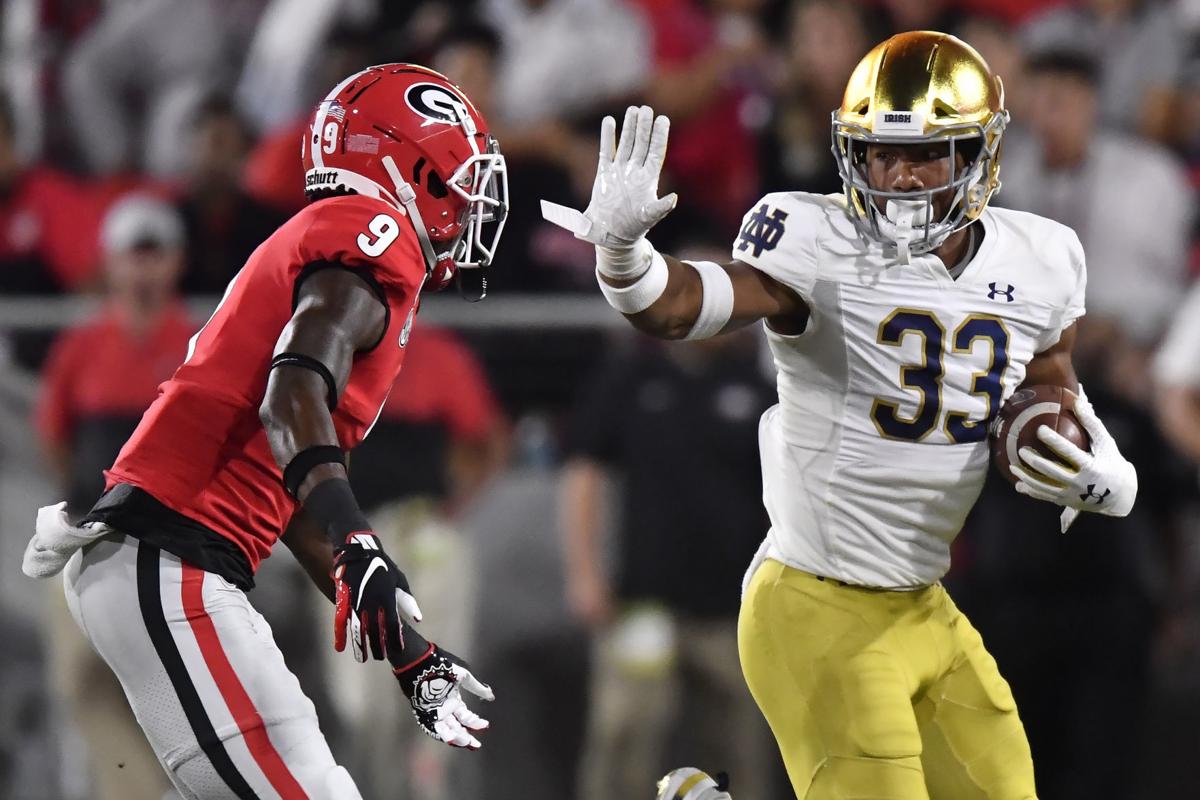 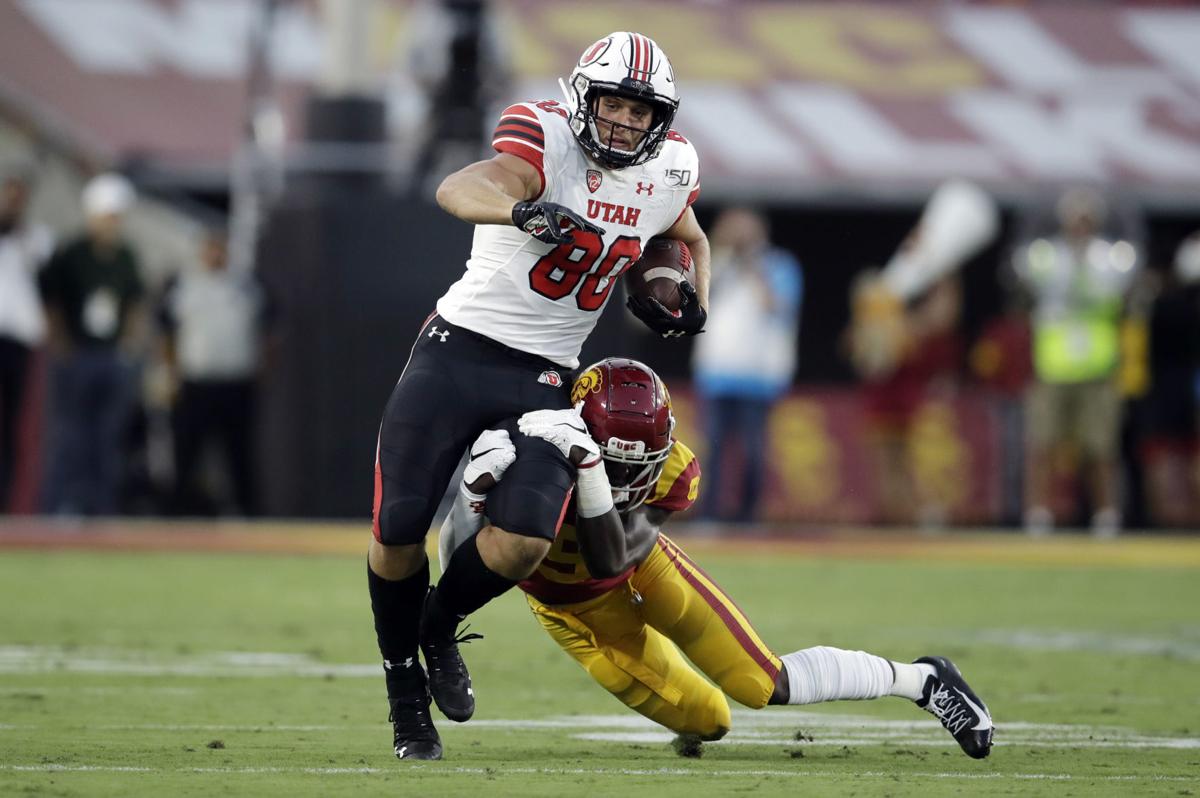 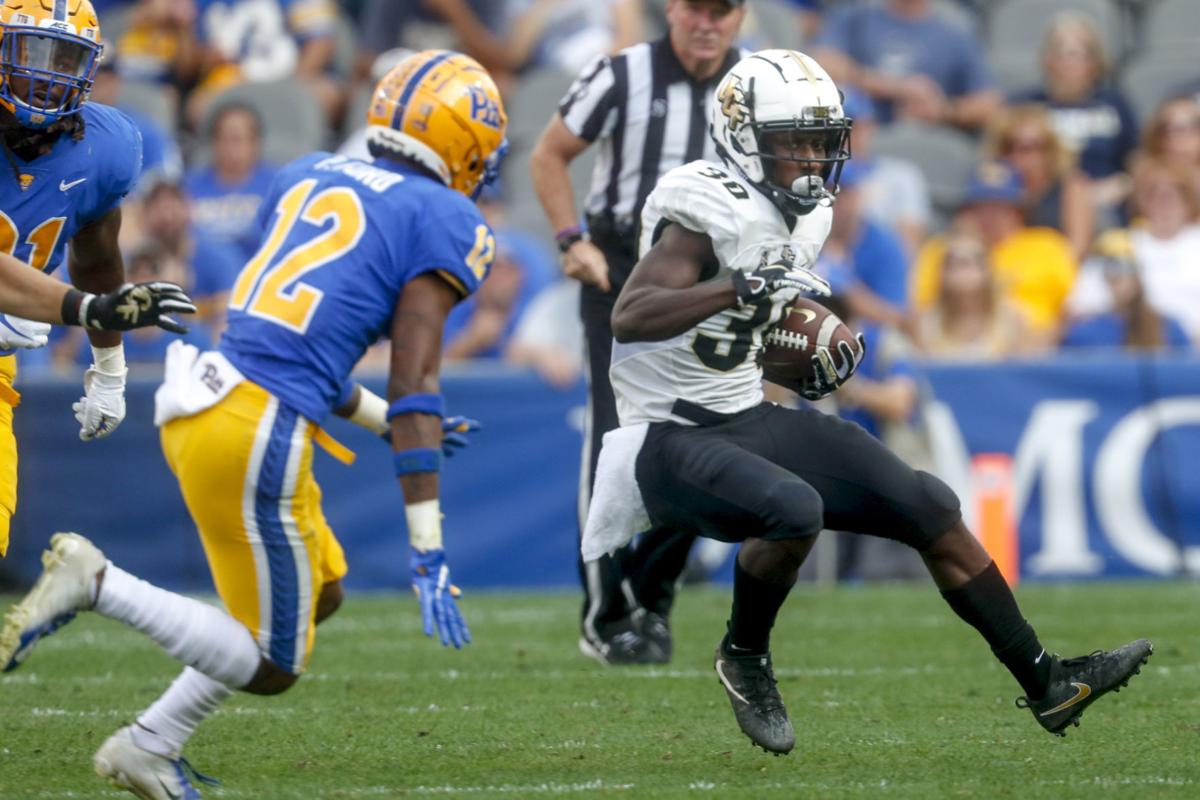 Central Florida running back Greg McCrae (30) tries to evade Pittsburgh defensive back Paris Ford (12) on a ruin during the first half of an NCAA college football game, Saturday, Sept. 21, 2019, in Pittsburgh. (AP Photo/Keith Srakocic)

The value of a loss can be tricky to quantify for AP Top 25 voters.

For the first time this season, the AP college football poll presented by Regions Bank was given a good shake. Seven ranked teams lost, a season-high, including three in Saturday's trio of top-15 matchups.

Three teams fell out of the rankings, including Washington State, which fell from 19 after one of the biggest blown leads in college football history. Against a previously winless UCLA.

Voters were punitive with the Cougars, but were not so tough on No. 19 Utah, No. 20 Michigan, No. 22 UCF and No. 23 Texas A&M. All lost. All dropped at least six spots, but remained ranked.

In the cases of Utah and UCF, the losses were close — very close for the Knights — and on the road. Understandable to keep them around the bottom of the Top 25.

Michigan lingering after it was dominated at Wisconsin was more difficult to comprehend. Though you could make the argument that it's a nod to how well Wisconsin has played.

As for A&M, there is no shame in losing to No. 1 Clemson and No. 7 Auburn, but the Aggies weren't particularly good in those games and their only wins are against Texas State and Lamar.

Then there is Notre Dame, which dropped three spots to No. 10 after losing at No. 3 Georgia. The Irish had a good showing, but also an 11th straight loss against a top-five team. Maybe Notre Dame should not have dropped at all, but voters rewarded Auburn and Wisconsin for winning and that bumped the Irish. Teams are not ranked in a vacuum, as Reality Check often likes to remind fans.

Next: at North Carolina.

Reality check: Instead of potential challengers to Clemson emerging as the season goes along, the Atlantic Coast Conference is looking more hopeless to stop the Tigers juggernaut.

Reality check: WR Henry Ruggs III has scored 21 touchdowns on 74 career catches. The great Julio Jones had 15 touchdowns on 179 catches in three years at Alabama. Times have changed in Tuscaloosa.

Reality check: Kirby Smart leaned into his defense to beat Notre Dame and helped the Irish hang around. You've got an NFL offensive line, an experienced quarterback and maybe the most dynamic running back in the country, coach. Loosen up.

Reality check: LSU has scored 224 points through four games, the most by an SEC team over the last 20 seasons. Times have changed in Baton Rouge.

Reality check: After dropping 76 on poor Miami, Ohio, the Buckeyes took a small step forward in the polls. Now it's time for a step up in competition.

Next: vs. Texas Tech.

Reality check: An idle week cost the Sooners a spot in the rankings. No big deal.

Next: vs. Mississippi State.

Reality check: The Tigers have two really nice wins away from home, but 5.67 yards per play on offense is a massive red flag.

Reality check: Quarterbacks have won all but two Heismans since Wisconsin's Ron Dayne won the trophy in 1999. As long as the Badgers stay in the playoff race RB Jonathan Taylor has an outside chance.

Reality check: No top-10 team is drawing as much skepticism as the Gators. Seems fair.

Reality check: The Irish lack the game-changing skill players to beat the elite.

Reality check: The first step toward becoming a playoff contender is consistently winning the games you're supposed to win. The Longhorns now seem capable of doing that.

Next: at Maryland, Friday.

Reality check: Some early adversity can be an ominous sign or a learning experience for young team. Which will it be for the Nittany Lions?

Reality check: The Ducks have not allowed a touchdown since the game-winner in the closing second against Auburn. Yes, the competition has not been great, but the Ducks haven't played that type of defense against anyone in years.

Next: vs. Middle Tennessee.

Reality check: Iowa is the No. 14 team in the country? Whoa.

Ranked: Seems too high, but somebody has to be No. 14.

Next: vs. Arizona State.

Reality check: The Bears are the only ranked team without a 30-point game. Justin Wilcox's team is playing 1990s football.

Ranked: Seems too high, but somebody has to be No. 15.

Reality check: With UCF going down, the Broncos become the highest ranked team from outside the Power Five.

Next: vs. No. 21 Southern California.

Reality check: Washington has beaten up all comers except Cal. We're about to find out if they are paper Huskies.

Reality check: The Cavaliers took a while to get going in a trap-game against Old Dominion. Virginia plays trap games now!

Next: vs. Washington State.

Reality check: The Utes played most of the loss to USC without star running back Zack Moss, but it wasn't the running game that let them down. It was pretty much everything else.

Reality check: Lots of attention on the offense, but the Wolverines' defense hasn't been any good either.

Reality check: Winning is hard, especially on the road. One loss doesn't invalidate the Knights.

Next: vs. Arkansas at Arlington, Texas.

Reality check: The Aggies still have to play Nos. 2-4 and nothing so far suggests they are ready to take one down.

Next: at Oklahoma State.

Reality check: That victory at Mississippi State looks even better a week later.

Reality check: The performance against Northwestern only makes the debacle a week early against Arizona State look worse.

Instead of Michigan, Texas A&M and Michigan State how about Appalachian State, SMU and Wake Forest?

After being dominated 35-14 against Wisconsin, Michigan head coach Jim Harbaugh didn't hold back saying his team was out-done in every facet o…

Signature victories change perceptions, and that was certainly the case after the Badgers rolled to a 35-14 victory over Michigan Saturday afternoon at Camp Randall Stadium.

Sure, there's a long, difficult Big Ten schedule ahead, but the Badgers showed Saturday how good they have become in the wake of a disappointing 8-5 season.

The Badgers (3-0, 1-0 Big Ten) jumped out to a 28-0 halftime lead and extended that cushion to 35-0 in the third quarter before closing out the Wolverines 35-14 in their Big Ten Conference opener Saturday at Camp Randall.

The ejections of safeties Eric Burrell and Reggie Pearson put a damper on what was otherwise another impressive performance for UW's defense in a 35-14 victory over the Wolverines.

A quick look at the 13th-ranked Wisconsin Badgers' 35-14 win over the 11th-ranked Michigan Wolverines in their Big Ten Conference opener Saturday at Camp Randall Stadium in Madison.

State Journal columnist Tom Oates grades the No. 13 Wisconsin Badgers' performance in their 35-14 win over the No. 11 Michigan Wolverines in their Big Ten opener Saturday at Camp Randall.

What's up with the slow starts? 4 takeaways as Northwestern preps for a showdown at Wisconsin

Here are four takeaways as Northwestern prepares for a brutal assignment at Wisconsin after getting whipped 31-10 by Michigan State on Saturday.

The loss to Wisconsin will only fuel critics who believe Harbaugh can't win the big one: Michigan is 1-6 on the road against Top 25 teams under him and has lost three straight bowl games.

BetOnline released odds for Michigan’s next coach if Jim Harbaugh doesn’t return, placing Meyer at 7-to-1, behind Stanford’s David Shaw, Virginia’s Bronco Mendenhall and others.

AP Top 25 Reality Check: Field closes in on Tide and Tigers — Buckeyes should be No. 1

For the first time this season, some AP voters decided a team other than Alabama or Clemson deserved their first-place votes.

Michigan defensive lineman Aidan Hutchinson walks off the field with his teammates after losing 35-14 to Wisconsin in an NCAA college football game Saturday, Sept. 21, 2019, in Madison, Wis. (AP Photo/Andy Manis)

Central Florida running back Greg McCrae (30) tries to evade Pittsburgh defensive back Paris Ford (12) on a ruin during the first half of an NCAA college football game, Saturday, Sept. 21, 2019, in Pittsburgh. (AP Photo/Keith Srakocic)