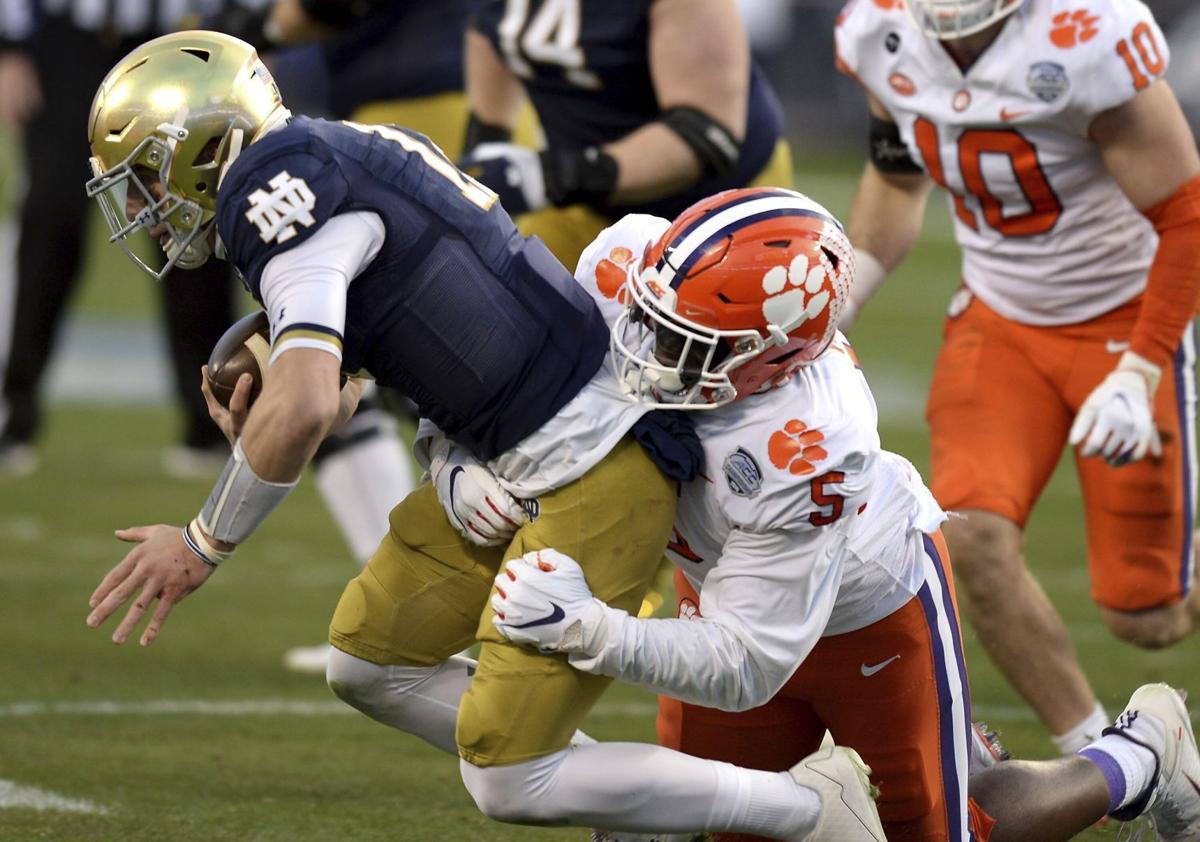 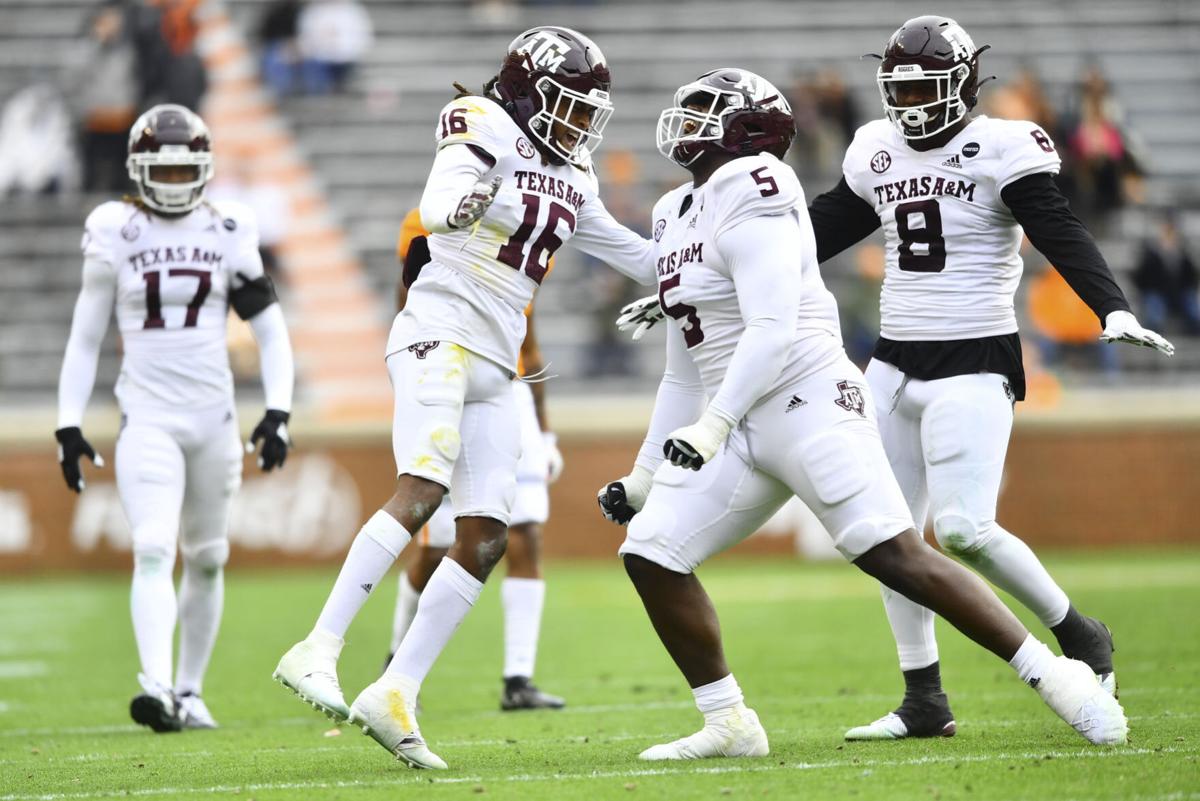 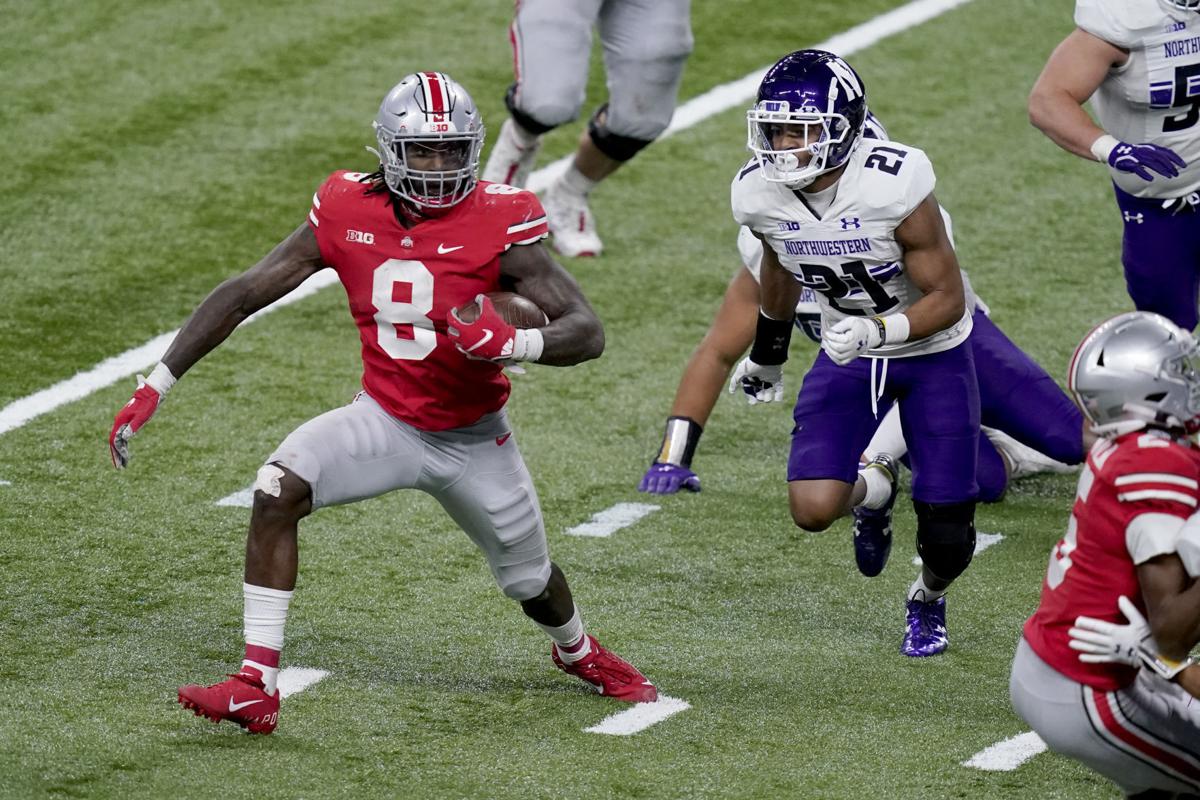 Ohio State running back Trey Sermon (8) runs for the end zone to score past Northwestern defensive back Cameron Mitchell (21) during the second half of the Big Ten championship NCAA college football game, Saturday, Dec. 19, 2020, in Indianapolis. (AP Photo/Darron Cummings)

What is better (or worse, depending on perspective): Losing to Alabama by 28 on the road in early October or losing to Clemson by 24 in the Atlantic Coast Championship game Saturday?

For Notre Dame and Texas A&M, the answer to that question could determine a spot in the College Football Playoff.

The selection committee will ponder which teams should play in the final four after Alabama and Clemson convincingly locked up their spots, and Ohio State likely did the same, though not without difficulties beating Northwestern in the Big Ten championship.

The field is scheduled to be revealed Sunday at about 11:15 p.m. CST.

The Aggies (8-1), lurking at fifth in the CFP rankings, finished their regular season with a 34-13 win at Tennessee and quickly began lobbying for inclusion.

Maybe the most important piece of Texas A&M's resume is its lone loss. The Aggies fell 52-24 at No. 1 Alabama on Oct. 3. They haven't lost since, including a comeback against SEC East champion Florida the week after losing to the Crimson Tide.

The Tide (11-0) looked like a lock to make the playoff no matter what happened in Atlanta, but Nick Saban's crew left no doubt it would be the top-seed.

The Fighting Irish probably thought they were safely in, too. They entered the ACC title game undefeated, with a victory over Clemson already in the bank.

The rematch could not have gone much worse for the Irish.

Notre Dame played one solid quarter before Clemson ran out to a 34-3 lead. A fourth-quarter touchdown made it look a little more respectable.

Trevor Lawrence was back in the lineup for Clemson after missing the regular-season matchup as he recovered from COVID-19. He was spectacular, making a late push for the Heisman with 412 yards of offense.

As well as Clemson freshman quarterback DJ Uiagalelei played in the overtime loss at Notre Dame, Lawrence makes a world of difference. As did having linebackers James Skalski and Mike Jones and defensive tackle Tyler Davis back for the Tigers. Those three also missed the the regular-season meeting.

Clemson as No. 3 and will likely move up.

Notre Dame, sitting at No. 2 in the CFP rankings for a month, now will get thrown into a beauty contest with Texas A&M, neither conference winners.

“We’ve got two top-15 wins (including North Carolina). We’ve got a win over this Clemson team that was No. 1 in the country,” Notre Dame coach Brian Kelly said. "I don't know that anybody has a resume that has those two wins. And we’ve played 11 games. ... I think that in my mind puts us without question as one of the top-four teams in the country”

It doesn't take a detective to decipher that both Fisher and Kelly were trying to drag Ohio State and its six-game season into this debate.

Clemson coach Dabo Swinney did the same earlier in the week. Kelly has been beating this drum even longer. Last month, Kelly noted after beating Boston College to improve to 8-0 that the Irish had already played a full Big Ten schedule.

The Buckeyes, who have been holding steady at four, didn't even get that many games in because of COVID-19 cancellations. They slogged through three quarters of the Big Ten title game against a game Northwestern team before pulling away late.

"If we had to play one game against anybody in the country, I’ll take the Ohio State Buckeyes,” coach Ryan Day said.

Anybody else want to make a case?

Oklahoma after winning the Big 12 has two losses. No two-loss team has ever made the playoff.

Cincinnati stayed unbeaten with a walk-off field goal to beat Tulsa in the American Athletic Conference championship game. The Bearcats were ninth in the last playoff rankings, a spot ahead of Oklahoma, but no team outside the Power Five conferences has ever made the playoff.

Everything about this season in a pandemic has been difficult. So it is only fitting the playoff selections will be, too.

News came down Saturday night that the semifinal scheduled to be played at the Rose Bowl in Pasadena, California, on Jan. 1 would be relocated to AT&T Stadium in Arlington, Texas, the home of the Dallas Cowboys.

With that settled all that's left to figure out is who is playing where.

Trey Sermon ran for 331 yards and scored two second-half touchdowns, helping No. 3 Ohio State rally past No. 15 Northwestern 22-10 for its fourth straight conference crown and a likely spot in the College Football Playoff.

Thanks to gritty veterans who refused to quit and a Minnesota defense that was several notches below what UW had seen recently, the Badgers kept the Axe, evened their record at 3-3 and assured that they wouldn't be embarrassed to accept a bowl invitation.

It took a gutty, full-team performance and an overtime period to get the job done but the Badgers bounced back from three consecutive losses to post a 20-17 win over visiting Minnesota on Saturday at Camp Randall.

Chenal was involved at every level of the defense against the Gophers — rushing the passer, defending the run and dropping into coverage — as the Badgers pulled out a 20-17 victory in overtime.

Groshek was the only experienced tailback remaining on UW’s roster and he delivered big time, rushing for a career-high 154 yards and a touchdown in the Badgers’ 20-17 OT victory over the Golden Gophers.

A quick look at the Badgers' 20-17 OT victory over the Golden Gophers in the battle for Paul Bunyan's Axe Saturday at Camp Randall.

Tom Oates grades the Badgers' performance in their 20-17 overtime victory over the Golden Gophers in the battle for Paul Bunyan's Axe Saturday at Camp Randall.

Bret Bielema, who led Wisconsin to three conference championships before a disappointing run at Arkansas, is returning to the Big Ten and his home state to coach Illinois.

Not playing as many Power Five teams as normal has limited the conference's exposure to losses, but its best teams have proved worthy of all the attention and been one of the best stories of this pandemic-altered season.

In what was the only matchup of this weekend of teams ranked in both the AP Top 25 and the College Football Playoff rankings, No. 20 North Carolina put an historic 62-26 beating on the No. 9 Hurricanes.

A season filled with uncertainty brought on by the COVID-19 pandemic will end with a perfectly predictable College Football Playoff: Alabama vs. Notre Dame. Clemson vs. Ohio State.

Making the largest comeback in UW bowl history to win the Duke's Mayo Bowl pushes UW to its 19th consecutive winning season and gives Paul Chryst a 5-1 record in bowl games as the Badgers’ head coach.

DeVonta Smith caught three of Mac Jones’ four touchdown passes and Najee Harris ran for 125 yards with a high-hurdling highlight in a 31-14 victory over No. 4 Notre Dame in a CFP semifinal Rose Bowl played inside about 1,400 miles from Pasadena, California.

The top-ranked Tide (12-0) are set to face No. 3 Ohio State (7-0) on Monday for the College Football Playoff championship in search of their sixth national title with Nick Saban as coach.

Ohio State running back Trey Sermon (8) runs for the end zone to score past Northwestern defensive back Cameron Mitchell (21) during the second half of the Big Ten championship NCAA college football game, Saturday, Dec. 19, 2020, in Indianapolis. (AP Photo/Darron Cummings)