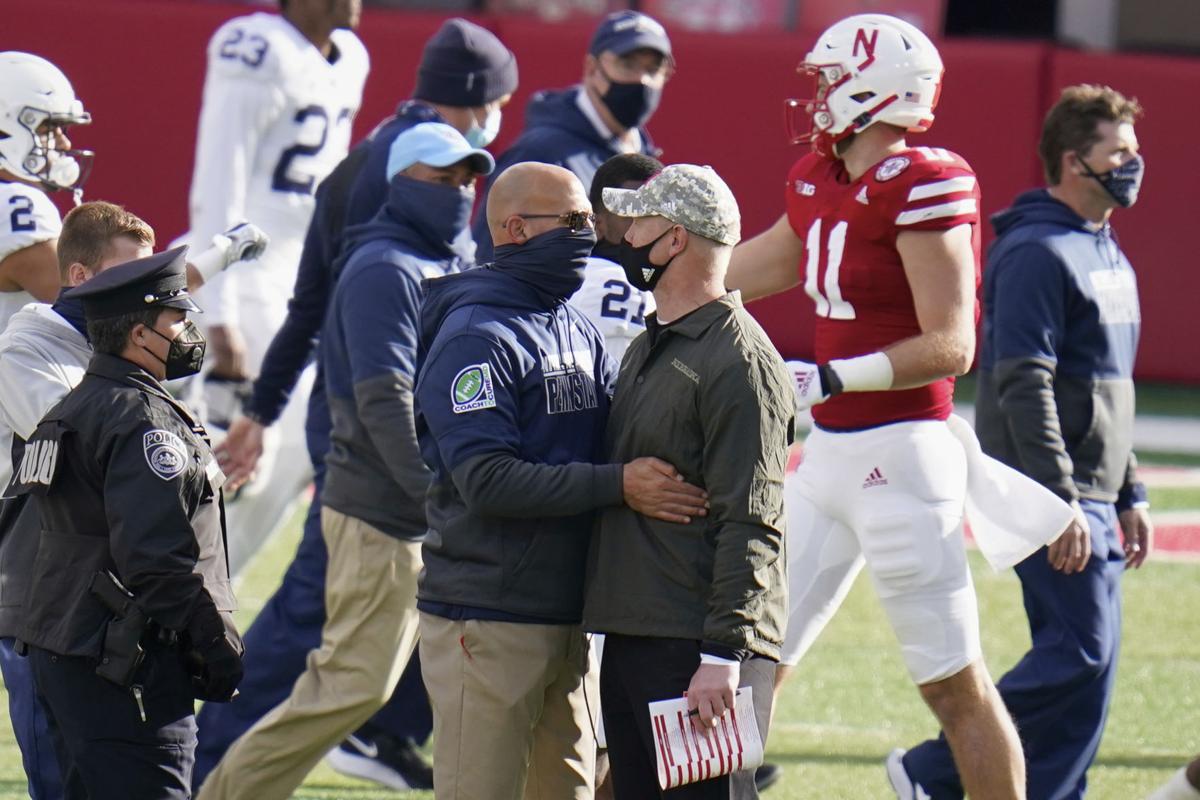 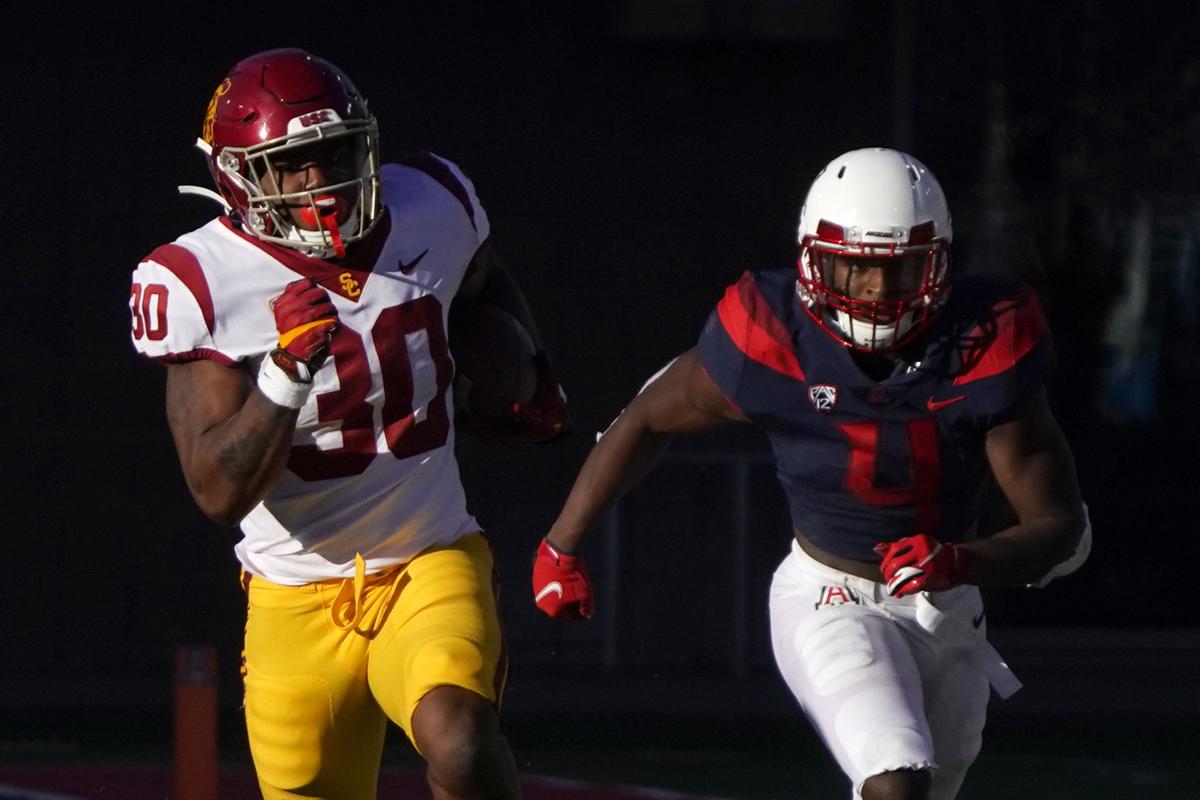 Southern California running back Markese Stepp (30) breaks away from Arizona defensive back Christian Roland-Wallace (4) in the second half during an NCAA college football game, Saturday, Nov. 14, 2020, in Tucson, Ariz. (AP Photo/Rick Scuteri) 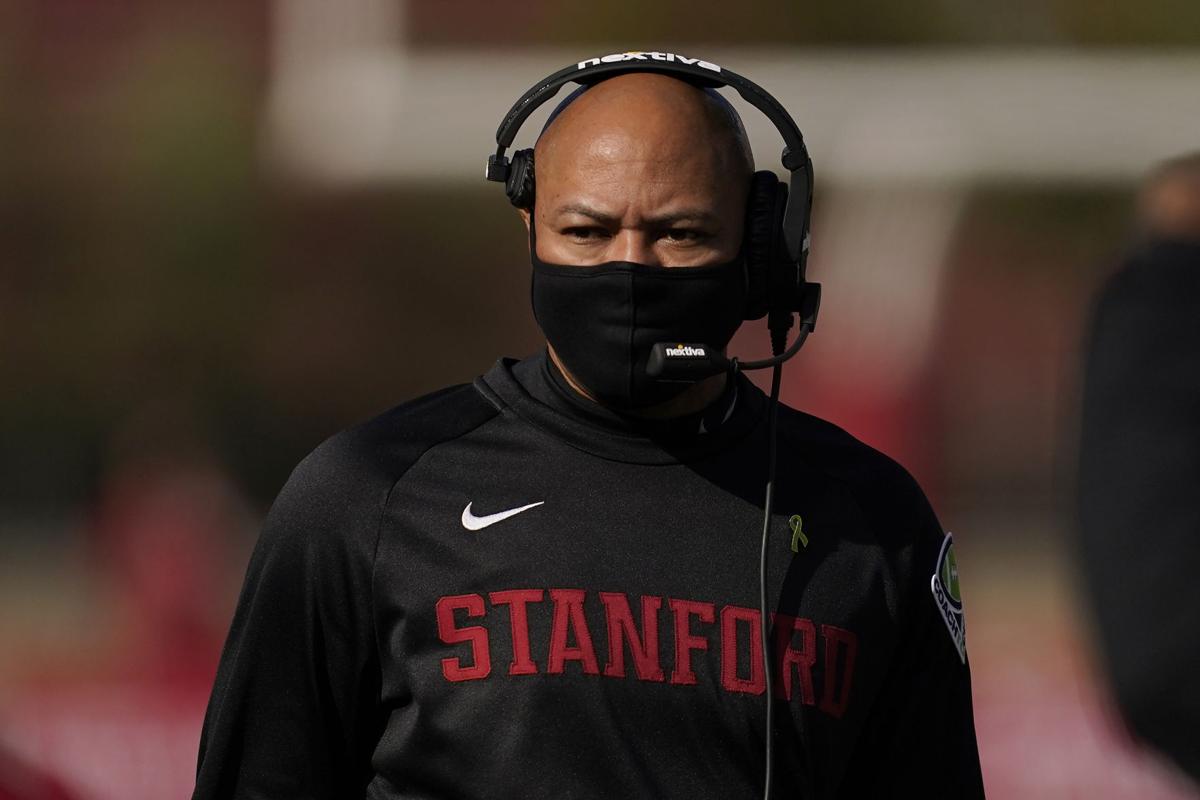 Stanford head coach David Shaw walks on the sideline during the first half of an NCAA college football game against Colorado in Stanford, Calif., Saturday, Nov. 14, 2020. (AP Photo/Jeff Chiu)

For several years speculation has persisted that if Southern California ever did move on from Clay Helton, Penn State's James Franklin would a logical candidate to coach the Trojans.

Franklin's charisma, big-picture thinking and track record of success checks all the boxes for USC, even if maybe he has maxed out at Penn State.

The pandemic figures to make lots of schools that would have ordinarily made a coaching change this season to stand pat, but patience at USC is in short supply. The Trojans are off to a 2-0 start, but their play continues to be uninspiring and sloppy.

Meanwhile, Penn State is probably the most disappointing team in the country, 0-4 after starting the season ranked No. 7.

The timing could be right for Franklin and USC to make the rumors a reality.

The Nittany Lions' collapse has been stunning and bizarre. All-America linebacker Micah Parsons opted out in August and star running back Journey Brown had to give up football because of a heart condition.

Still, there seemed to be plenty of talent for Penn State to have another good season, even if it couldn't overtake Ohio State in the Big Ten.

But ever since Devyn Ford scored that ill-advised touchdown in the opener at Indiana, the season has spiraled.

Penn State has now lost two games in which it has gained more than 450 yards and held its opponent (Indiana and Nebraska on Saturday ) under 300 yards. That is hard to do.

“The message in the locker room after the game, it sucks but none of us are going to stop fighting,” Penn State quarterback Will Levis said. "The season isn’t over.”

It will be interesting to see if Penn State can still salvage something from this mess. In a normal season, teams with high hopes can get deflated and never recover. In this season, keeping players motivate will be even tougher.

“All of us in every single area can be better,” Franklin said.

Adding to the stress of it all for Franklin, he has lived away for his family throughout the pandemic to better protect his young daughter, who has sickle cell.

Franklin is 56-27 at Penn State since taking over a program wracked by sanctions and recovering from the Sandusky scandal. It has been laborious to lead Penn State past the end of the Paterno era, but Franklin has produced three 11-win seasons and a Big Ten championship.

He also went 24-15 in three seasons at Vanderbilt, which might be even more impressive than what he has accomplished at Penn State.

As for USC, for all the investments the school made this offseason in assistant coaches and support staff for Helton, the Trojans still don't play up to their talent.

For the second straight week, USC needed a late-scoring drive to win. Last week it took a small miracle for the Trojans to beat Arizona State. This week they pulled one out against an Arizona team picked to finish last in the Pac-12.

It's difficult to predict how USC leadership will assess this season. The Trojans are by far the most talented team in the Pac-12 South and could get to the conference title game without beating a ranked team.

Moving on from Helton will cost a small fortune. But if this is the best Helton can produce, it won't be good enough. And if a frustrating season in Happy Valley leads Franklin to seriously consider a new challenge, that could motivate USC even more to make the move.

If Franklin wants to see an example of a coach who probably stayed in a job too long, he can take a look at what's going on at Stanford with David Shaw.

Shaw followed Jim Harbaugh with the Cardinal and had five double-digit win seasons and three Pac-12 titles in his first six seasons.

The Cardinal have been back sliding ever since. First a little at a time. Then they plummeted to 4-8 last year and now are 0-2 after losing to Colorado on Saturday.

Shaw could have had a number of NFL jobs when Stanford was rolling, but loyalty to his alma mater and a desire to not uproot his family kept him at Stanford.

But winning on The Farm is difficult. The bully-ball style the Cardinal used to push around the Pac-12 for years now seems outdated and the school's margin for error in recruiting has always been razor thin.

It seems unfathomable Stanford would ever fire Shaw, but both he and the Cardinal look like they could benefit from a change.

AROUND THE COUNTRY: After a week spent crossing games off the schedule because of COVID-19, Saturday featured just one top-five team playing and no games matching ranked teams. The playoff race was basically put on pause ... There is not much left to say about Michigan after it was run out of the Big House by No. 13 Wisconsin. But try this: This was the Wolverines' third home loss by at least 28 points under coach Jim Harbaugh, more than the last five Michigan coaches combined. ... Kentucky paid tribute to offensive line coach John Schlarman, who died this week after a long battle with cancer, by lining up on the first play against Vanderbilt without a left guard ... Much was made about Notre Dame transfer Phil Jurkovec facing his old team as Boston College's starter. But the matchup with the Irish turned out to be a chance for Ian Book to show Notre Dame kept the right quarterback. Over the last two weeks, Book has never played better. ... No. 10 Indiana shut out Michigan State and will go to No. 3 Ohio State next week for what will most likely be the first top-10 matchup in the history of the program. ... North Carolina's Sam Howell set a school-record with 550 yards passing in a wild come-from-behind victory against Wake Forest. Howell is the most overlooked great quarterback in the country. ... With all the other Heisman contenders idle for one reason or another, Kyle Trask threw six more touchdown passes for No. 6 Florida against Arkansas. He has an SEC-record 28 through six games, one more than Tua Tagovailoa had last year and three more than Heisman winner Joe Burrow. ... Ole Miss WR Elijah Moore, you might remember him from his end zone antics in last year's Egg Bowl, is working on an All-America season. Moore is the first receiver in the country to break 1,000 yards after putting up 225 against South Carolina. ... Tulsa's victory against No. 19 SMU was its second against a ranked team this season. The Golden Hurricane only had two victories against ranked teams in the previous 40 years. ... It would have been interesting to see No. 11 Oregon's personnel from last season, including quarterback Justin Herbert, running the Ducks' current offense under coordinator Joe Moorhead. Oregon pulled away from Washington State after a sluggish first half.

The Tigers' streak of top-five appearances reached 50 this week, the longest active streak in the country and the third-best in the history of the AP poll.

Northwestern, Indiana set the stage for a pair of unlikely showdowns with Badgers, Buckeyes

Big Ten football teams are sorting themselves out, making a clearer picture of who is pushing for a spot in the championship game. And four games in, we can safely say Northwestern and Indiana are legit.

'Work to be done': Jim Harbaugh has new, 5-year deal at Michigan

Michigan has decided to stick with coach Jim Harbaugh, finalizing a new, five-year deal that cuts his guaranteed compensation but gives him an opportunity to make up for the financial loss if he can start winning championships.

Southern California running back Markese Stepp (30) breaks away from Arizona defensive back Christian Roland-Wallace (4) in the second half during an NCAA college football game, Saturday, Nov. 14, 2020, in Tucson, Ariz. (AP Photo/Rick Scuteri)

Stanford head coach David Shaw walks on the sideline during the first half of an NCAA college football game against Colorado in Stanford, Calif., Saturday, Nov. 14, 2020. (AP Photo/Jeff Chiu)